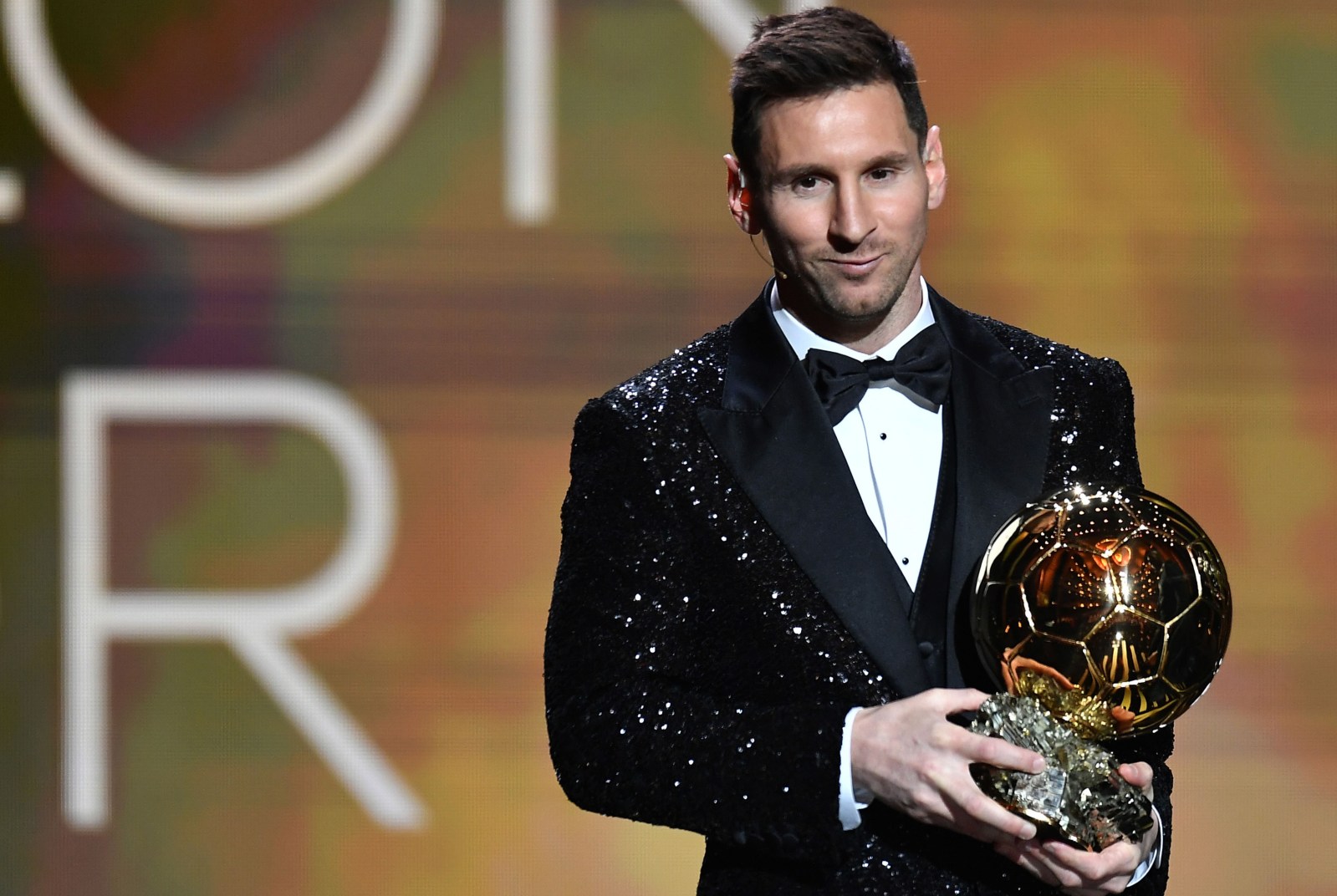 Lionel Messi is awarded with his seventh Ballon D'Or award during the Ballon D'Or Ceremony at Theatre du Chatelet on November 29, 2021 in Paris, France. (Photo by Aurelien Meunier/Getty Images)

Argentina’s Lionel Messi won the Ballon d’Or award for the best player in the world for a record-stretching seventh time on Monday, beating Robert Lewandowski and Jorginho to lift soccer’s most prestigious trophy yet again.

“It’s incredible to be here again. Two years ago I thought it was the last time. Winning the Copa America was key,” Messi said at Paris’s Theatre du Chatelet.

“It is a special year for me with this Copa America title. It meant a lot to win at the Maracana stadium and I was so happy to celebrate with the people from Argentina.

“I don’t know if it’s the best year of my life, I’ve had a long career, but it was a special one with the title with Argentina after the tough times and the criticism.”

Messi, who joined Paris St Germain on a free transfer from Barcelona during the close season after finishing as La Liga’s top scorer with the Spanish club, collected 613 points, with Bayern Munich’s Lewandowski, named best striker on Monday, getting 580.

Jorginho, who won the Champions League with Chelsea and the European championship with Italy, ended up third on 460, ahead of France’s Karim Benzema and Ngolo Kante in fourth and fifth places respectively.

Lewandowski, who many feel was unlucky to have lost out, was magnanimous in defeat.

“I want to thank every single journalist who voted for me, and believed that my achievements were important in 2021. I won Striker of the Year Award and no player can win an individual award without the strongest team and loyal fans behind him. And for me it’s no different. I want to thank my club Bayern Munich for the platform they’ve given me to succeed and to achieve my dreams.

“The key moment was the Champions League final against Olympique Lyonnais,” she said.

Putellas is the third winner of the Ballon d’Or Feminin after Ada Hegerberg in 2018 and Megan Rapinoe in 2019. There was no ceremony last year due to the coronavirus pandemic.

On a good night for Barcelona, the 19-year-old Pedri was awarded the Kopa trophy for the best Under-21 player.

“The best way to celebrate turning 19 is receiving this award. I’d like to thank everyone at Barcelona for helping me here,” he said.

Before the awards ceremony, five-time Ballon d’Or winner Cristiano Ronaldo launched a stinging attack on one of the chief organisers of the awards, calling him a ‘liar’ for claiming his sole footballing ambition is to win the coveted honour more times than Messi.

Ronaldo was a notable absentee from Monday’s Paris gala in which the 65th Ballon d’Or winner was announced.

Ronaldo, though, stole the limelight by releasing a statement hours before the winner was confirmed, criticising France Football’s editor-in-chief Pascal Ferre of lying. The publication oversees the Ballon d’Or event.

Before the awards, Ferre told the New York Times in an interview that: “Ronaldo has only one ambition, and that is to retire with more Ballons d’Or than Messi, and I know that because he has told me.”

Ronaldo’s statement struck back with the same superb timing he displays on the football field.

“Today’s outcome explains Pascal Ferre’s statements last week, when he said that I confided in him that my only ambition was to finish my career with more Ballon d’Ors than Lionel Messi,” a post by Ronaldo on Instagram read.

“Pascal Ferre lied, he used my name to promote himself and to promote the publication he works for.

“It is unacceptable that the person responsible for awarding such a prestigious prize could lie in this way, in absolute disrespect for someone who has always respected France Football and the Ballon d’Or.

“The biggest ambition of my career is to win national and international titles for the clubs I represent and for the national team in my country.

Ferre was quoted at length in the New York Times piece, where he spoke of the deep secrecy of the outcome and of how every footballer wants to win the award. Ferre said that Croatian Luka Modric “cried like a child” when he was told was the winner.

“It is Christmas for them (the players),” Ferre said in the interview. “It is the only chance you get in a team sport to celebrate by yourself.”

Ronaldo also rubbished claims that he declined to attend the gala in Paris because he was in quarantine and he knew he would not win the award.

“He (Ferre) lied again today, justifying my absence from the gala with an alleged quarantine that has no reason to exist,” continued Ronaldo’s statement.

“I always want to congratulate those who win, within the sportsmanship and fair play that have guided my career since the beginning, and I do it because I’m never against anyone.

“I will end by saying that my focus is already on Manchester Uniteds next game and on everything that, together with my teammates and our fans, we can still achieve this season. The rest? The rest is just the rest…”

Ronaldo did not explain why he failed to attend the awards. DM

Roll of Honour at the Ballon d’Or ceremony:

Club of the Year: Chelsea (England)