Police Commissioner Khehla Sitole: ‘It’s not necessarily a gross dereliction of duty, it was a shortcoming of intelligence’ 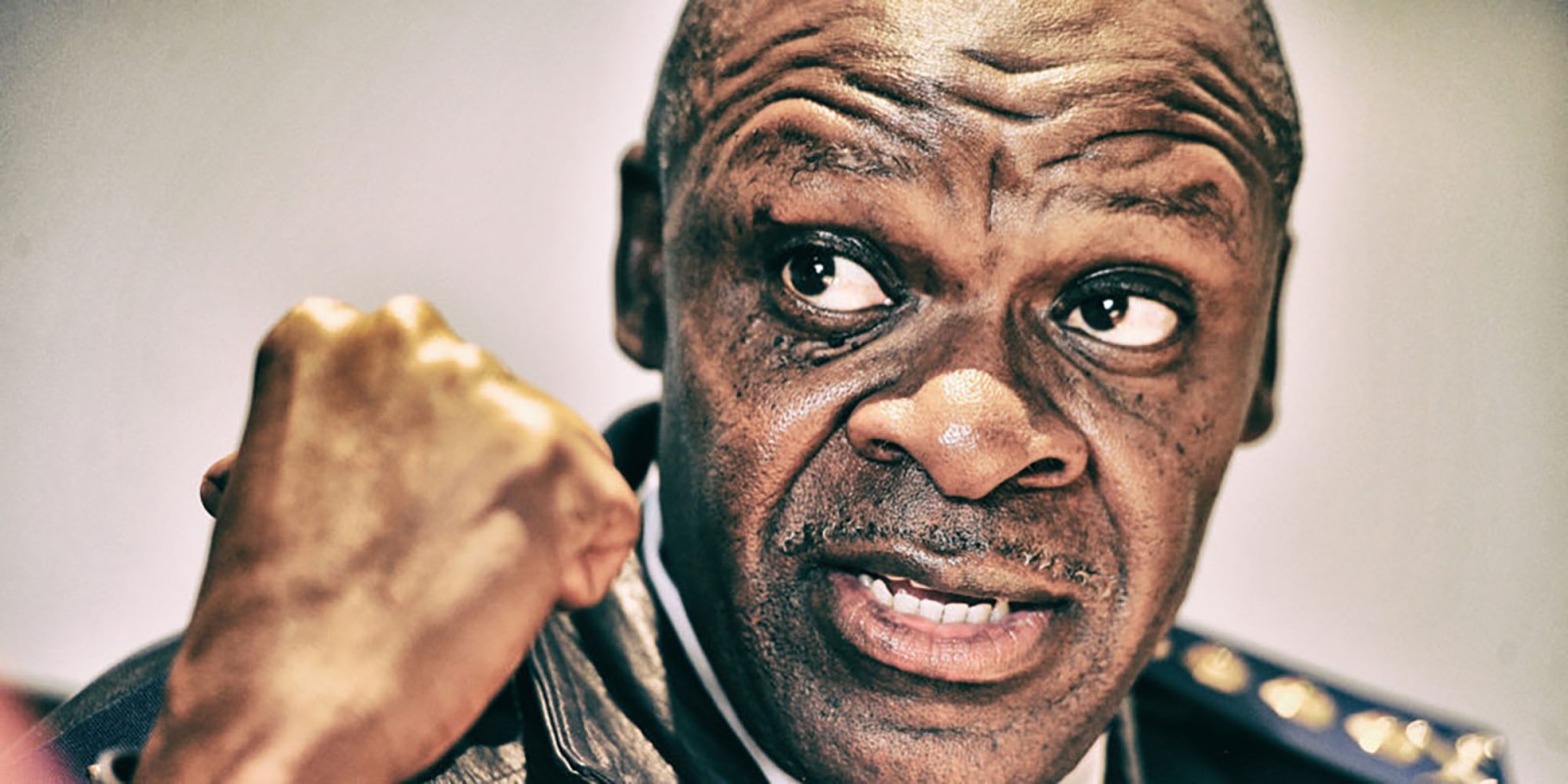 “In the operational room that I chose to be in when the country was under siege, there was all forms of communication and the ability to communicate. The position I took is the same position I took during the execution of the court order [for former president Jacob Zuma’s arrest]. I commanded that operation from my operation room. I was even able to give an update to the commander in chief from there. [Cele] may have been looking for me in the wrong place…. My phone was on, it was not on silent.”

This was how South African Police Service (SAPS) national commissioner Khehla Sitole responded when asked by evidence leader Advocate Keketso Motshabi, who spent much of her time interrogating Sitole about a statement submitted to the South African Human Rights Commission (SAHRC) by Cele last week. In that statement, parts of which were read out by former defence minister Nosiviwe Mapisa-Nqakula at the request of evidence leaders during her testimony, Cele alleged that he did not receive any early warning reports into the riots and looting from Sitole, which would have come via Crime Intelligence, and that he was unable to contact the general at the time of the unrest.

Sitole irked evidence leaders while concluding his virtual testimony at the commission’s ongoing probe into the violence. At one point, an unsubtle advocate Smanga Sethene commented that the “rules of engagement” would be for the general to keep his answers short.

Motshabi also told the general that his answers were “long-winded”.

Sitole was called to testify in the third week of the hearings into the unrest, which started with the jailing of former president Jacob Zuma on a contempt of court charge (Zuma has since been released on medical parole). Supporters of the former president had gathered at his Nkandla homestead to ensure that he was not jailed, and from that venue, and via social media platforms, threats were expressed freely about how the country would pay the price in the form of protests if Zuma was incarcerated.

After hours of “negotiations” Zuma eventually handed himself over to police at his homestead and was rushed through to the Estcourt Correctional Centre in the early hours of 8 July. That night, sporadic reports of unrest and trucks being looted and torched — not uncommon in KwaZulu-Natal — were being received by journalists, and presumably by police.

Sitole reiterated that there was an operational plan in place for Zuma’s arrest and the possible violence at the time of his arrest, but the modus operandi shifted to such an extent that no intelligence had been gathered for the actual violence and looting that spiralled from that.

The “overwhelmed” SAPS has been severely criticised for being absent and ineffective during the eight days of rampant criminality, which led to the need for the military’s deployment.

The acrimonious relationship between Cele and Sitole has been well documented and has been punted as a possible reason by commentators and political parties as to why the July unrest was not sooner and better handled.

Fanning the flames was the Supreme Court of Appeal earlier this month by upholding a high court ruling that found Sitole, along with two subordinates, in breach of duties relating to the procurement of a R45-million “grabber” prior to the ANC’s Nasrec elective conference in December 2017.

Asked about his relationship with Cele on Tuesday, Sitole paraphrased what he had said during his prior testimony. The relationship was “professionally normal”, he told Motshabi, and was “governed by rules”.

“I would then let the minister know. As to who must be deployed and at what time, we don’t have to agree on who must be deployed. There is no time for that. I agree we need to find each other, but unfortunately, the timing is sensitive, and when I inform him, I would already have to have deployed or I would have failed to act. Sometimes the minister won’t see it that way and we will need to sit together and discuss things. [If there] are feasible reviews needed, I am [not averse to that].”

Sitole said he contacted Cele when and where it was necessary. Both men also had executive offices, he said, and if Cele was looking for him, he could have phoned his executive manager, which had happened in the past. His “protectors” had also previously received calls from Cele’s “protectors” he said, when the minister was looking for him. “I have also got calls from the deputy [police minister] before. There are all those provisions in place”.

From Sitole’s testimony, it appears that much of the communication he had with the minister was as a result of cluster briefings where both were present.

While being questioned by advocate Sethene, Sitole said no intelligence report from Crime Intelligence was passed on to Cele or the president about the actual riots and looting, because it did not exist. This was not a gross dereliction of duty on his part, he said.

“It is not necessarily a gross dereliction of duty…. I think if it is explained, I have explained it was a shortcoming of intelligence.”

Said Sethene: “Under your watch, the country has been embarrassed.  The KwaZulu-Natal premier was here on Friday and said ‘we were embarrassed’. Do you share those sentiments?”

Responded Sitole: “I don’t agree, there is nothing that says that. In terms of my functional mandate, I have to respond to the situation. During that particular time, the situation did not warrant me to be where the minister was, but to provide a multi [pronged] response from where I was.”

Sethene was incensed when the commissioner would not state how many people were killed in Phoenix. The area, like hundreds of others across the province, was rocked by violence, with looters breaking into malls and business premises in that township and in nearby areas, such as Cornubia. In the violence, black residents from neighbouring townships were allegedly racially profiled by Indian residents and at least 30 of them killed.

“Do you know how many people were killed in Phoenix?” asked Sethene.

“Yes, I received a report.”

“What is the number?”

“At the moment I won’t give you a full report.”

“You are looking at [the number] on the screen. Someone is assisting you as you give evidence.”

“I said ‘yes I received a report’, you rejected that.”

“How many [of those killed in Phoenix] were black?”

“How many were Indian? You don’t know.”

“It is contained in the report,” replied Sitole. “I don’t want to say I don’t know. I do have a report. I deal with many reports.”

Sethene asked if the general had visited Phoenix or the surrounding townships following the unrest, to which Sitole responded in the negative.

Mapisa-Nqakula told the commission during her testimony that Mkhwanazi was allowed to go on paternity leave during the unrest. He had also been “uncooperative” and “disrespectful” to ministers in the security cluster when they visited the province as the unrest was taking place.

“You gave [Mkhwanazi] leave in the middle of the crisis,” said Sethene.

“It wasn’t necessarily leave, there was a situation at home which he needed to attend to. I gave him permission to attend to the situation and come back,” said Sitole. “His wife was in hospital.”

“Yes, his wife was in hospital, she was expecting a baby, a bundle of joy. And you gave him leave while the country was burning,” said Sethene.

“Yes, he had to support his wife. But there were senior officers [to relieve him]. He came back [though],” responded Sitole.

This was in contravention of the provisions of the SAPS act, said Sethene, which states that in an instance of crisis when deployment is required, the national commissioner shouldn’t allow people to go on leave, and those who are resigning should not be allowed to do so.

Sitole said he gave Mkhwanazi leave, but he did not fail in his duties by doing so. It was at his discretion to analyse the situation and exercise his prerogative, said the general. Mkhwanazi returned after two days of leave, he said.

Mkhwanazi was expected to give testimony later in the afternoon. DM

Read Daily Maverick here regarding the End of the legal runway for Khehla Sitole and his top officers as Supreme Court of Appeal sides with suspension.

At 5pm on 30 November, this article was updated to correct the name of the evidence leader, Advocate Keketso Motshabi.