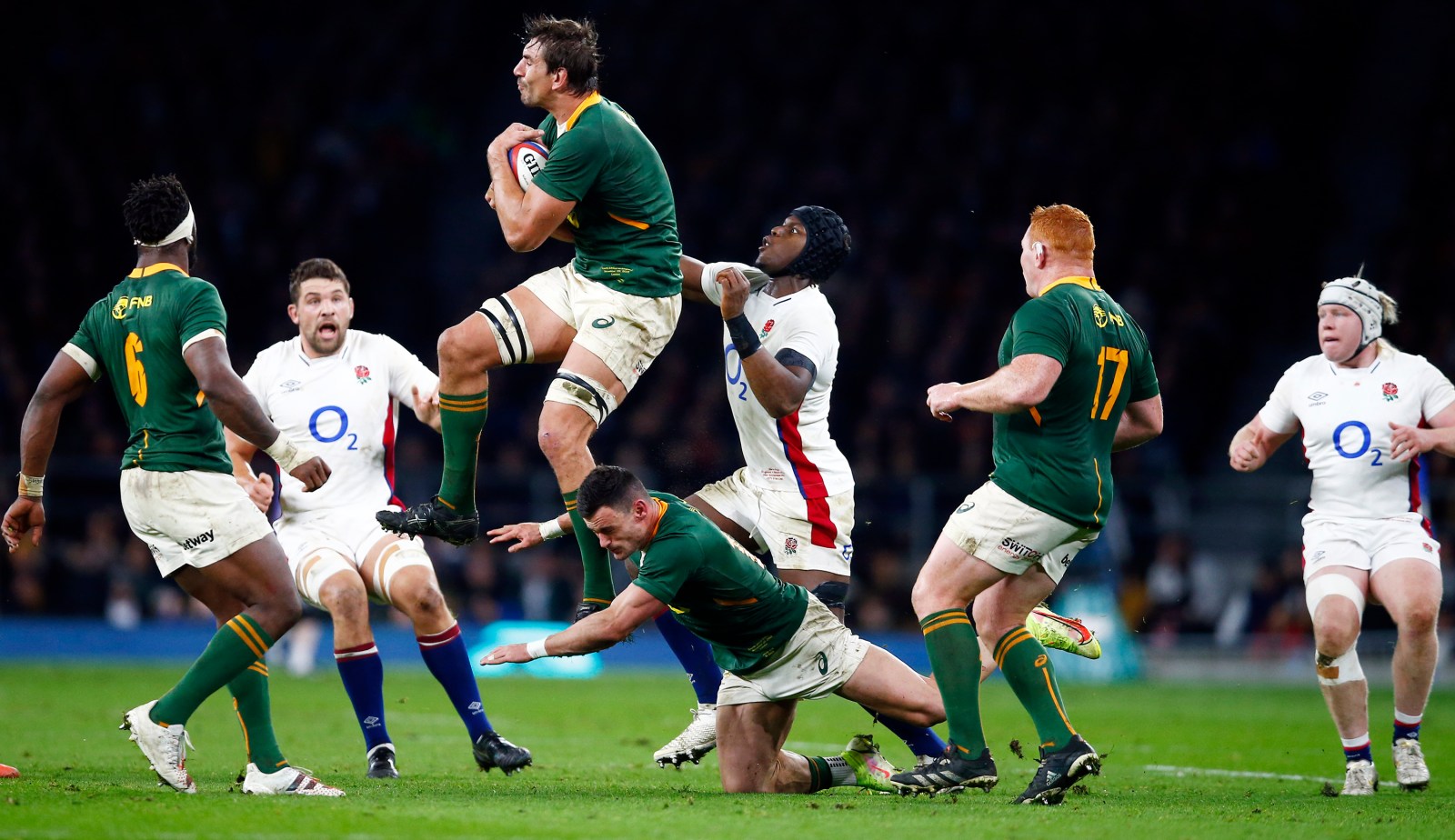 If November’s Tests are anything to go by, the Boks face a tough Rugby World Cup 2023 journey.

The Springboks finished the 2021 season as the top-ranked team in the world. Since then, fans and pundits based outside South Africa have questioned the credibility of the World Rugby rankings, citing the Boks’ middling win record of 63%.

While the Boks won the series against the British & Irish Lions and defeated the All Blacks away from home, they lost other major Tests against Australia, New Zealand and, more recently, England.

While the ranking system has been the subject of debate for some time, the Boks’ position at the top is partially attributed to the fluctuating fortunes of the other top rugby nations. If we learnt anything over the course of the November Tests staged in the northern hemisphere, it’s that the top seven or eight teams have the ability to beat one another on any given day.

The All Blacks side that won five out of six matches in the Rugby Championship was humbled by Ireland in Dublin and then by France in Paris.

Six Nations champions Wales struggled against New Zealand and South Africa, before scoring a crucial and controversial win against Australia.

The Wallabies managed to beat the Boks twice in the Rugby Championship, but were brought low by Scotland in November. Scotland then proceeded to lose to the Boks, who in turn went on to lose to England.

Who is the best team on the planet at this stage? The short answer is there isn’t one – and that is a good thing for rugby two years out from the 2023 World Cup.

Every team is building towards the next global tournament in France, and it’s encouraging to think that teams like South Africa have the potential to grow stronger over the next two years.

They will have to improve if they are going to come through a difficult World Cup pool and progress all the way to the final. South Africa have been drawn alongside Ireland and Scotland in Pool B. While Ireland have never progressed beyond the quarterfinals, and Scotland made the semis back in 1991, it would be unwise to underestimate the threats they pose, particularly in northern hemisphere conditions.

Scotland could have won the 2021 Six Nations if not for two narrow losses. A number of key players such as Finn Russell joined the Lions in South Africa in July, and then played a role in the big win over Australia in November.

Ireland, meanwhile, will grow in confidence after claiming their third win against the All Blacks in five years.

The Boks will need to beat at least one of the Celtic teams to progress to the quarterfinals. There they will face France or New Zealand – the favourites to advance from Pool A.

Boks have All Blacks, France in sights

France have been on the rise since Fabien Galthié was given the coaching reins in 2020. While they’re yet to win the Six Nations on his watch, they have played a balanced and largely entertaining brand of rugby that has earned them several big wins and admirers around the rugby world.

The recent victory over the All Blacks highlighted the potential of the French team, while the level of support inside the Stade de France provided a taste of things to come in 2023.

The controversial call to award France the World Cup hosting rights instead of South Africa still rankles in most rugby circles, and one of the spinoffs of that decision is that Les Bleus rather than the Boks will have a clear advantage if the two teams meet in the playoffs.

The opening fixture between France and New Zealand has been billed as the pool match of the tournament. A clash between the All Blacks and the Boks in the quarterfinals, however, would be just as epic.

The All Blacks finished the 2021 season with three losses. Most other teams would be thrilled to finish the season with only three defeats, but the All Blacks aren’t most teams and the New Zealand rugby community certainly holds its national side to a high standard.

The team will be going all out to prove a point in 2022, and will travel to the 2023 World Cup determined to reclaim its fearsome aura.

Bok coach Jacques Nienaber says the team has moved on from the 2019 World Cup and has closed the book on the 2021 Lions series. The recent three-match tour to the United Kingdom was viewed as the first part of the journey to France in 2023.

Results aside, the coaches had the chance to assess a variety of players and combinations in northern hemisphere conditions. They will be better for the experience of competing on soft, wet fields in the years to come. The conditions in France in 2023, of course, will be similar to what they endured in Cardiff, Edinburgh and London.

The Boks are in a strong position as far as depth is concerned. There are a few exceptions – at fullback, inside centre and flyhalf – but overall Nienaber has developed a wide pool of players.

The coaches will receive further answers over the next 15 Tests or so, and it’s possible that even more rookies – six players made their debuts in 2021 – will be brought into the mix.

Many successful coaches talk about striking the right balance between youth and experience in a World Cup squad. While a wealth of experience is needed to win big World Cup matches, the impact of more youthful players should not be underestimated.

Frans Steyn certainly made a telling contribution for the Boks as a 20-year-old at the 2007 World Cup, while Herschel Jantjies was drafted into the 2019 squad after only a handful of appearances for his country.

The age and experience profile of the current squad reflects a good balance. What’s more, that balance is unlikely to shift too much over the next two years.

As many as 24 members of the current squad are 30 or younger. There are likely to be changes ahead of the next World Cup – with five or six stalwarts returning to the group from injury.

There should still be a healthy representation of young stars and players in their prime, though. If one is to use the current 32-man squad as an example, as many as 18 players will still be 30 or younger when the team travels to France in 2023.

Nienaber will have some tough calls to make if some of the aforementioned senior players lose form ahead of the next World Cup. It would come as a surprise, however, if the vast majority of these stalwarts – who, apart from Le Roux, Nyakane, Steyn and Vermeulen, will all be 33 or younger in 2023 – are not in tow when the Boks go to France to defend their World Cup title. DM168