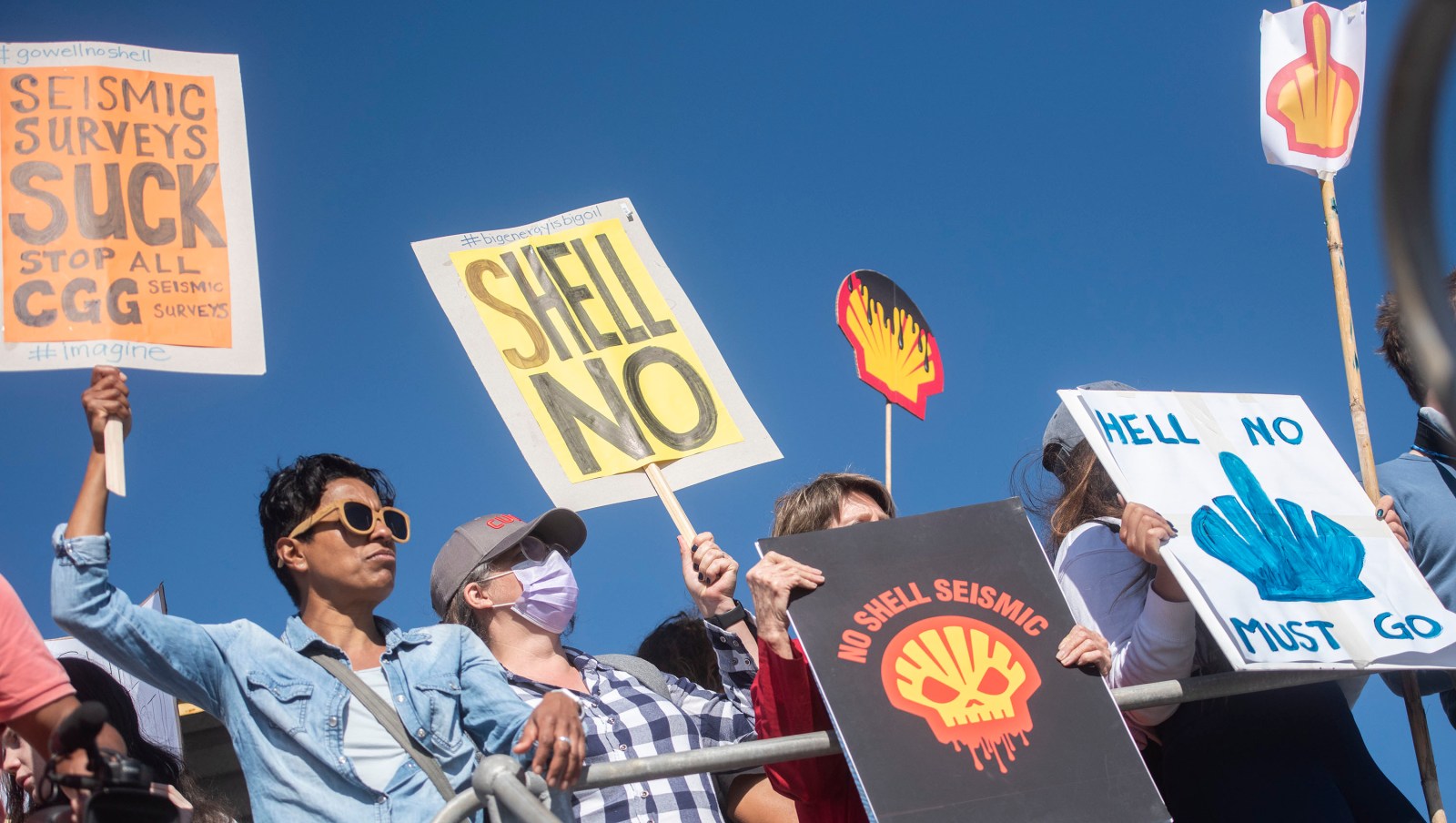 Protesters at the Waterfront in Cape Town on 21 November 2021 awaiting the arrival of the Amazon Warrior. They are against the planned Shell seismic survey for oil and gas in the ocean. (Photo: Gallo Images / Brenton Geach)

With Shell’s planned Wild Coast seismic survey starting on Wednesday, Border Deep Sea Angling Association says it will go to court to stop the survey, while Express Petroleum has cut ties with Shell.

With only a day to go before a seismic survey in search of oil and gas starts on the Eastern Cape’s Wild Coast, the backlash continues between Shell and environmental activists who are calling for the survey to be halted.

On Friday, Express Petroleum, a fuel supplier that owns 35 stations in the Eastern Cape, cut ties with Shell and dropped Shell branding from all its stations and vehicles.

However, Shell on Monday said it was continuing with the survey.

Over the weekend Daily Maverick reported that Shell’s planned seismic survey off the Wild Coast, which is due to begin on Wednesday, is just one of several offshore exploration projects under way or planned along the coast of South Africa. No less than four other explorations are in the pipeline or have already begun.

A petition – initially addressed to Forestry, Fisheries and the Environment Minister Barbara Creecy and subsequently addressed to Mineral Resources and Energy Minister Gwede Mantashe – to withdraw approval for the Shell seismic survey had attracted 341,456 signatures by Monday.

Creecy has distanced herself and her department from the fallout. Spokesperson Albi Modise said Creecy and the environment department had not been involved in the decision-making process for the proposed exploration activities.

He said the application process had been finalised before the One Environmental System, which serves to integrate different aspects of the environmental management of mining activities, came into effect in December 2014.

He said the authorisation had been granted in 2014 under the Mineral and Petroleum Resources Development Act by the then minister of Mineral Resources, Ngoako Ramatlhodi.

Mantashe, the current minister, has declined to comment on the matter.

“We have sent a very strong letter of objection to the Minister of Forestry, Fisheries and Environment, Barbara Creecy. Our lawyers, Cullinan & Associates, have sent follow-up letters,” he said.

Luef said it is ludicrous that the survey is even being considered as an option by the government in any of SA’s coastal waters, “let alone the extremely biodiverse and sensitive Wild Coast. We will not take this lying down and we will do all in our power to put a stop to it.”

He said the seismic blasting is a pending disaster and “that is why all citizens of this country should get involved with putting a stop to this absolute madness”.

“The SA government and Minister Creecy are doing a 180 [degree turn] on what they have publicly stated is their mandate to facilitate an economic growth path that is equitable, inclusive, sustainable and environmentally sound. A path that is in line with our Constitution, promotes sustainable development and the right of all of us to enjoy an environment that is not harmful to our health or wellbeing. Proof that our sea creatures and environment will not be affected is what we want,” Luef said.

He said that BDSAA had formed the first three MPAs in Border waters, policed them and punished any of their members caught fishing in them.

“We eventually managed to get these MPAs to be promulgated into law by the government and have continually involved ourselves with policing them and environmental issues concerning the future of our heritage. We are proud of our involvement. BDSAA sees this seismic blasting as a pending disaster,” he said.

Express Petroleum last week said they are extremely passionate about South Africa and care deeply for the future sustainability of its coastline.

“We would like to make all our customers and concerned citizens aware that Express Petroleum are in no way involved nor do we support the much published seismic blasting occurring off the Wild Coast of South Africa by Shell,” said the company.

Express Petroleum said they had already been procuring product from alternative sources and had started debranding all of their co-branded retail sites as well as removing all Shell branding from their company vehicles and assets.

A Shell spokesperson on Monday said they are engaging with Express Petroleum directly.

“We plan to go ahead with the survey, because we have met all our legal obligations for the survey,” she said. DM/OBP