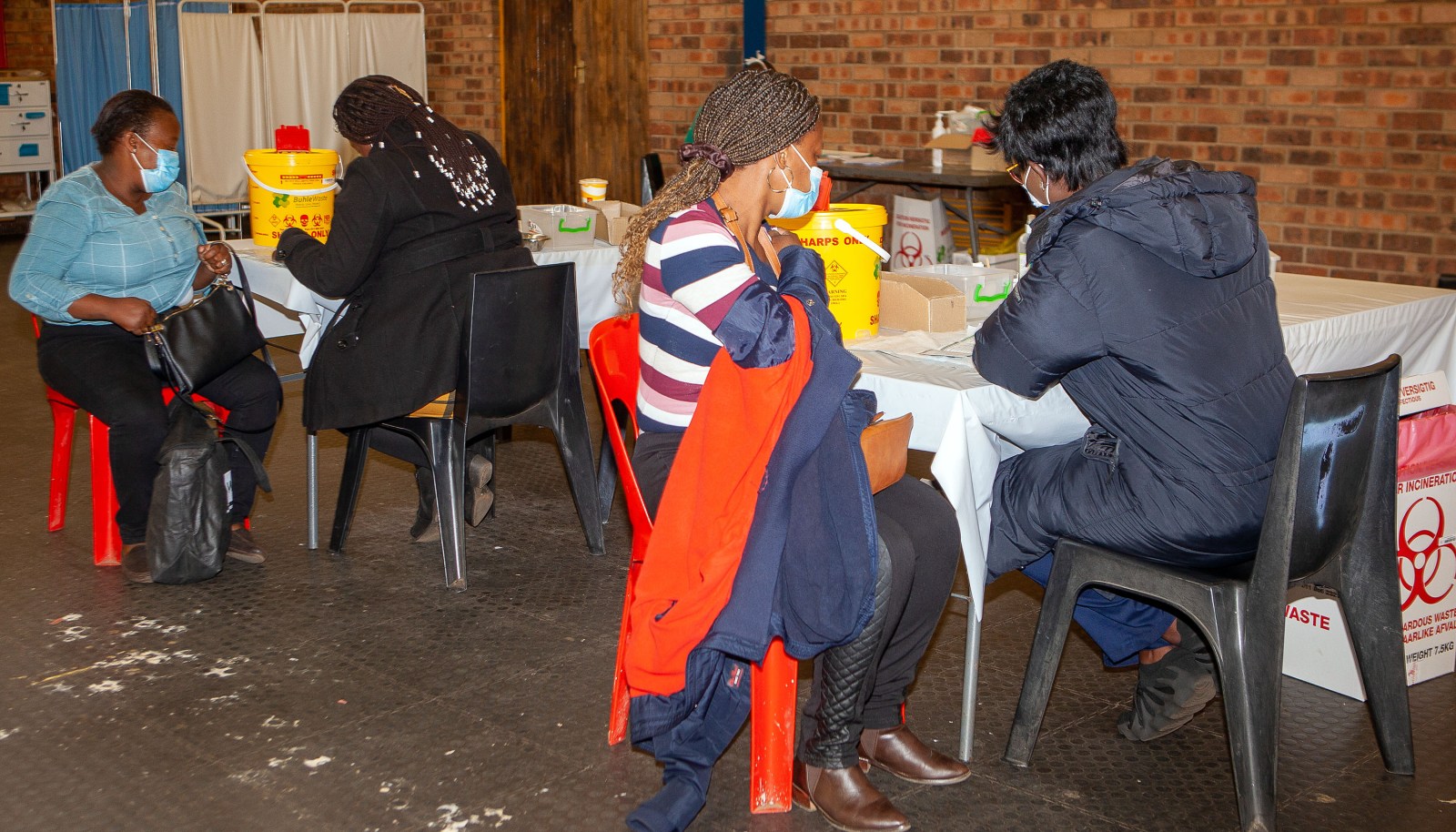 The doctor who alerted government scientists to the possibility of a new variant said people infected with Omicron are showing milder symptoms than those suffering the Delta strain. South African researchers said Omicron appears to be more transmissible than its predecessors but that existing vaccines are still likely to offer good protection against severe illness and death.

Governments across the globe stepped up restrictions on travel, as the World Health Organization warned that the new variant of the virus could fuel a fresh surge in infections with severe consequences. US President Joe Biden cautioned Americans against panicking and urged them to instead get vaccinated or obtain booster shots.

Cases of Omicron have cropped up in locations from Australia to the UK, Spain and Canada, leading economists to reassess their outlooks for the global recovery. US stocks rose and bonds fell as a sense of calm returned to global markets. 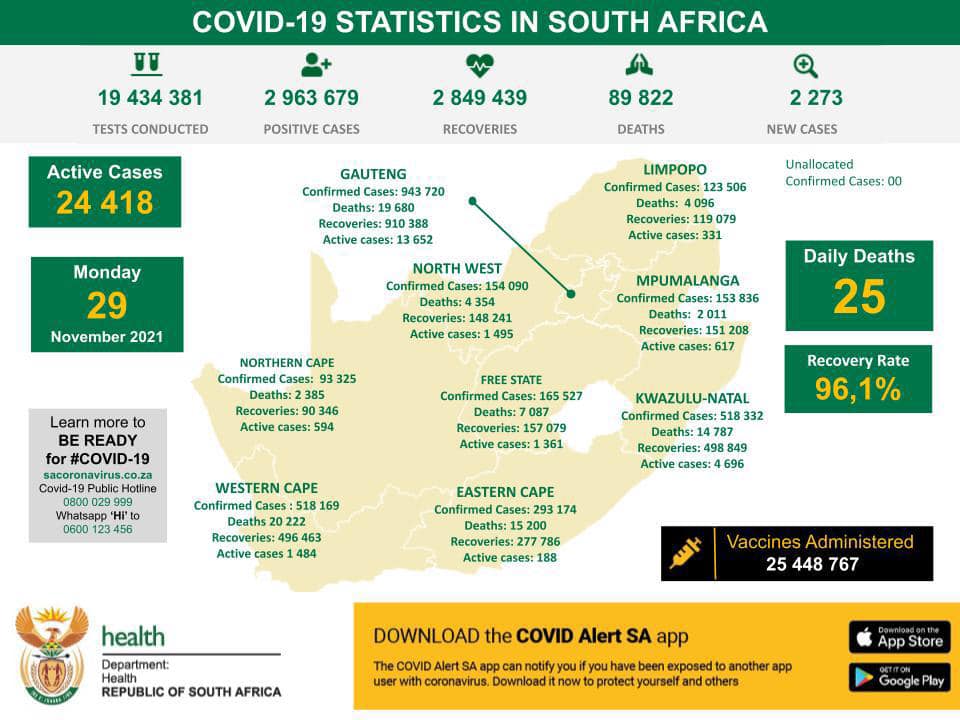 Pfizer’s top executive said the company will know within two to three weeks how well its Covid-19 vaccine holds up against the new Omicron variant, and even in a worst-case scenario he expects the existing formula will retain some efficacy against the heavily mutated strain.

The company is currently conducting lab tests to see how antibodies generated by the existing vaccine work against the new variant, Chief Executive Albert Bourla said on Bloomberg Television’s Balance of Power with David Westin.

New Jersey hospitalisations for Covid-19 reached 950, the highest in seven weeks, Governor Phil Murphy said. The number has surged 35% since November 1. Even so, the total is about a third of the 2,908 hospitalisations a year ago, when vaccinations weren’t available.

More than 78% of New Jersey’s population has received at least one dose of the Covid-19 vaccine, higher than the US total of 69.7%. The unvaccinated continue to make up most of the hospitalisations, Murphy said. New Jersey health officials are on alert for the Omicron variant, as Delta continues to fuel the recent surge, Murphy said.

President Biden says there’s no cause for panic

President Joe Biden cautioned Americans against panicking over the recently identified Omicron variant, and urged them to instead get vaccinated or obtain booster shots.

“This variant is a cause for concern. Not a cause for panic,” Biden said in remarks at the White House after a private briefing from his health advisers.

He said the administration doesn’t yet believe new formulations of coronavirus vaccines will be necessary but that it is already working with Pfizer and Moderna on contingency plans. He said he’ll issue a new strategy to combat a winter surge of coronavirus on Thursday, adding that the US will not have to practise further lockdowns or shutdowns.

The Madrid region has confirmed its first case of a patient with the Omicron coronavirus variant. A 51-year-old man who arrived in the capital on November 28 after travelling from South Africa with a stopover in Amsterdam, has tested positive, the health department for the Madrid region said in an emailed statement. The patient has mild symptoms and is isolated in quarantine.

Sweden has identified its first case of the Omicron variant of Covid-19, the nation’s Public Health Authority said on its website. The person had recently visited southern Africa and lives in southern Sweden.

The health advisory stops short of a mandate but signifies officials’ trepidation of a new Covid-19 wave as the Omicron variant spreads around the world and New York sees an increase in post-Thanksgiving Covid cases.

UK urges boosters for all adults

The UK is poised to offer Covid booster shots to all adults and second shots to more children amid worries that the new Omicron variant could spread even more easily and fuel another surge in cases.

A committee that advises the UK government said all adults should be eligible for a third dose, with availability expanded to those under 40. Children aged 12 to 15 should get second shots, the group said.

An expansion of the booster programme comes with tougher pandemic rules set to take effect this week in the UK. Prime Minister Boris Johnson’s government is seeking to buy scientists time to determine the risks posed by the new strain.

Chancellor Angela Merkel and her incoming successor, Olaf Scholz, will hold talks with Germany’s 16 state premiers on Tuesday to discuss the next steps in the fight against Covid-19.

The discussions will follow a decision by the Constitutional Court due in the morning, according to an official familiar with their plans. Germany’s top court is expected to lay out parameters for what restrictions are admissible to tackle the nation’s worst outbreak of the coronavirus pandemic.

German authorities are under pressure to introduce new curbs as case numbers climb and the new Omicron variant has been discovered in the country.

European Union leaders are discussing whether to hold an emergency virtual summit on Friday on how to tackle the new Omicron coronavirus variant, even as the bloc was already battling sharply rising case numbers.

The timing of the possible video call has yet to be decided, according to an EU official who declined to be named discussing a confidential issue.

Norway is extending isolation times for those testing positive to the coronavirus and where there’s reason to believe the infection is the Omicron variant, the Health and Care Services Ministry said in a statement.

Other household members will be required to quarantine for 10 days and close contacts to those infected must undergo testing under the new measures, which will apply regardless of vaccination status.

Italy may start Covid vaccinations on children in the 5-11 age group as soon as December 23, should the Italian Medicines Agency, Aifa, give the proposal the green light this week, Franco Locatelli, head of the National Health Institute, said in an interview on SkyTg24.

People infected by Omicron in South Africa are showing very different symptoms to those suffering from the Delta strain, said the doctor who alerted government scientists to the possibility of a new variant.

Patients who contracted it complain of fatigue, head and body aches and occasional sore throats and coughs, said Angelique Coetzee, who is also chairwoman of the South African Medical Association. Delta infections, by comparison, caused elevated pulse rates, resulted in low oxygen levels and a loss of smell and taste, she said.

It is the “only way out” from the current crisis, Zeman said in a statement via a spokesman on Twitter. The prime minister designate, Petr Fiala, the head of the incoming Cabinet led by the Civic Democrats, said in the past that the new administration wouldn’t be in favour of such a step.

Countries edged closer to support the idea of a treaty to help avoid future pandemics as more cases of the new omicron strain popped up.

World Health Organization member states, starting a three-day summit in Geneva on Monday, will decide on a proposal that would begin the process of drafting such an agreement, which will take years. A proposal was reached over the weekend that represents a “consensus text”, Gabby Stern, the head of communications for the WHO, said on Twitter on Sunday.

Scotland expects a rise in infections from the latest coronavirus variant after it emerged that some of the cases so far weren’t all linked to travel and may have been transmitted within the community.

Of the six people to have tested positive for the Omicron strain in the country, some probably picked up the infection from others in Scotland, First Minister Nicola Sturgeon said at a press briefing on Monday.

BioNTech is working to adapt its Covid-19 vaccine to address the Omicron variant and expects to have a new version ready within 100 days if necessary.

The company has started development in order to move as quickly as possible, BioNTech said in a statement. The first steps of developing a new vaccine overlap with the research necessary in order to evaluate whether a new shot will be needed – a process that began last Thursday as soon as news of the new variant began to spread around the world. DM