New licences could spark manufacture of Covid-19 pills in Africa 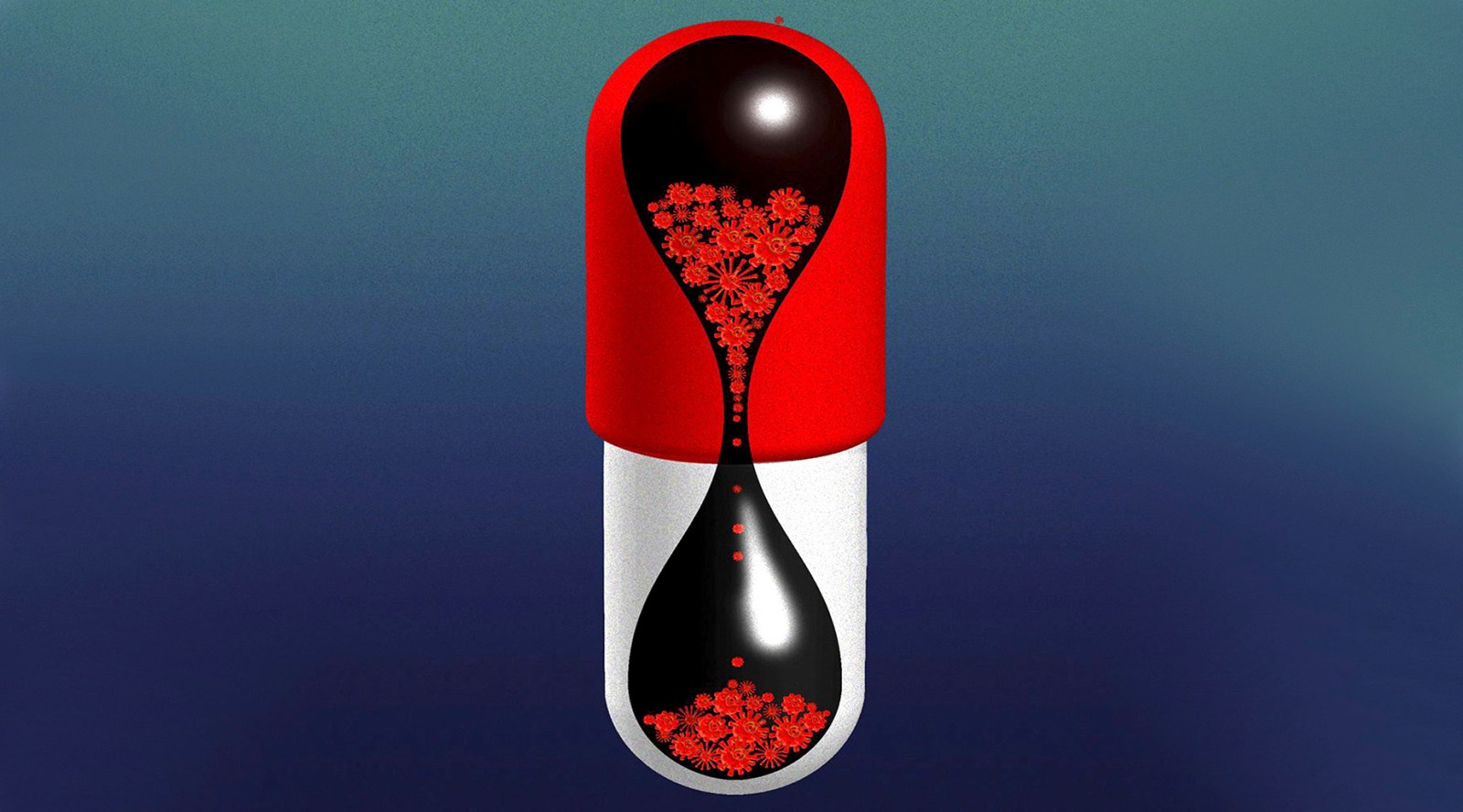 Pfizer and Merck, as well as all licensed generic companies, will need to apply for regulatory authorisation before they can sell their products in South Africa. (Illustration by Nicholas Konrad/The New Yorker/Wikipedia)

Pharmaceutical companies Merck and Pfizer recently announced early results from clinical trials showing that two new antiviral medicines are highly effective in reducing Covid-19 deaths and hospital admissions. The Medicines Patent Pool then announced licensing deals with both companies that will allow for generic versions of the drugs to be produced. Catherine Tomlinson unpacks the licences and asks whether generic versions of these pills might now be made in Africa.

While the results reported by Merck and Pfizer must still be peer reviewed and more detail is needed about each medicine’s risks and their interactions with other chronic medicines, the early findings offer new hope that highly effective treatments may soon be available to treat Covid-19.

Both products involve taking pills for five days, which means that, unlike another antiviral, remdesivir, which is administered intravenously, they can be taken at home by people diagnosed with Covid-19.

However, one snag might be that both medicines have to be started within a few days of symptoms starting. This means that to get the most out of them, testing must be widely and easily accessible and test turnaround times should be as short as possible. This might require wider use of antigen tests, given their faster turnaround times and lower cost than the gold-standard PCR tests. Though multiple antigen tests have been approved in South Africa, none has yet been approved for home use, as has been done in a number of other countries.

In addition to testing and health system challenges, the availability of adequate supplies of the medicines may also limit who has access to it. Wealthy countries are already buying up stock of molnupiravir and Paxlovid from Merck and Pfizer, as they did with Covid-19 vaccines. In the case of vaccines, it has resulted in delayed and inequitable vaccine access in poor countries.

To expand supply of the medicines, and improve their affordability for use in poor countries, the Medicines Patent Pool (MPP) recently negotiated and announced licensing deals with Merck and Pfizer that will allow generic drug companies to produce generic versions of molnupiravir and Paxlovid.

While MPP licences have significantly expanded manufacturing and availability of generic HIV, TB and HCV medicines globally, its licensing deals are often criticised for the countries that are left out. Each deal includes a list of designated countries in which generic products manufactured under the licensing agreements may be sold.

Yuanqiong Hu, senior legal policy adviser for the Doctors Without Borders (MSF) Access Campaign, said of the Pfizer deal: “We are disheartened to see yet another restrictive voluntary licence during this pandemic while cases continue to rise in many countries around the world. The world knows by now that access to Covid-19 medical tools needs to be guaranteed for everyone, everywhere, if we really want to control this pandemic.”

The exclusion of South Africa’s private sector from the deals does not bode well for private sector access, given that global demand for Pfizer and Merck’s originator products is expected to outpace supply substantially as each company moves to scale production and wealthy countries are already pre-buying stock. It also means the cost of both medicines in the private sector is likely to be far higher than in the public sector, although this is a relatively common feature of South Africa’s pharmaceutical market.

What the medicines will cost in South Africa remains unknown, but available information suggests that originator products will cost far more than generics. The US government has reportedly agreed to pay about R11,300 ($712) for a five-day course of molnupiravir and about R8,400 ($529) for a course of Paxlovid. While both companies have said they will use tiered pricing approaches, charging different prices in different countries, this approach typically keeps prices pegged far higher than when there is generic competition.

Aspen Pharmacare chief executive Stephen Saad recently told The New York Times that, if successful in seeking MPP licences, Aspen would be likely to market generic molnupiravir and Paxlovid at about R317 ($20) and R158 ($10) per course, respectively.

While African countries have historically been the greatest beneficiaries of MPP licences, when measured in terms of numbers of generic medicines accessed through the deals, African-based manufacturers have been underrepresented among the MPP’s sub-licencees (the companies awarded sub-licences by the MPP to manufacture and market generic products).

The MPP hopes the recently announced licences for molnupiravir and Paxlovid will enable more generic companies from more countries to produce medicines under MPP licences. “There is an intent, for both licences, to expand the geographic diversity of generic partners beyond the current MPP footprint that has included 25 generic manufacturing partners across six countries,” said Morin. He added that the “MPP expects an expansion of its number of partners across geographies, including from the African continent, but this will depend on manufacturers meeting the required standards”.

Stavros Nicolaou, senior executive at Aspen Pharmacare, says African pharmaceutical companies are generally very domestically focused and do not have the capability to manufacture for multiple geographies, as required of MPP licencees. “Part of the reason for this is that multilateral procurement agencies don’t tend to favour procurement out of Africa,” says Nicolaou. He adds that having offtakes and procurement from international agencies is critical. “If that happens, then you will likely see more African companies applying for these licenses.”

Generic companies had until 15 November to submit an expression of interest to manufacture molnupiravir under a MPP licence, and have until 6 December to express interest for Paxlovid. According to Morin, after receiving expressions of interest from manufacturers, “thorough blinded assessment of received applications is made, which will be followed by sub-licensing agreements being offered to shortlisted candidate companies”.

Spotlight asked Adcock Ingram and Aspen Pharmacare whether they had or planned to apply to the MPP for licences. Kavitha Singh, corporate communications manager for Adcock Ingram, said: “At this point in time a decision has not been made.”

Nicolaou said Aspen Pharmacare would be likely to apply for both licences. “Aspen has not previously licensed medicines through the MPP… as the MPP’s focus is mostly on ARVs and Aspen has pre-existing relationships with ARV R&D-based companies through which we could access IP and licences directly. Antiretrovirals and antivirals are different molecules. They have a very different positioning therapeutically. We believe that the most efficient way to get licences for these products is to go through the MPP.”

When will molnupiravir and Paxlovid be available in South Africa?

Pfizer and Merck, as well as all licensed generic companies, will need to apply for regulatory authorisation before they can sell their products in South Africa. Once the originator products are registered, generic suppliers will be able to apply for authorisation through a more expedited generic approval pathway. GroundUp recently reported that South Africa’s medicine regulatory authority has not yet received any regulatory applications for either drug.

Vuyo Mjekula, communications lead for MSD South Africa, told Spotlight that MSD (Merck) “plans to submit an application for registration for molnupiravir to [the regulator] as soon as possible. However, we cannot speculate on how soon we will receive approval [from] the regulator.”

Willis Angira, Pfizer’s external communications manager for East and southern Africa, says: “Pfizer has submitted data… as part of its ongoing rolling submission to the US FDA for Emergency Use Authorisation (EUA). We are also initiating rolling submissions or regulatory reviews in several other countries and working with the World Health Organization (WHO) to progress their assessment… We cannot speculate further on regulatory timing.”

Aspen’s Nicolaou says: “No one can really tell you when their product will be available until they have a drug approved. We are aware of the market need for these products, particularly on the African continent, and so we will try to respond as swiftly as possible.”

In addition to regulatory approval, the medicines must be reviewed and recommended by the National Essential Medicines List Committee on Covid-19 Therapeutics for use in South Africa’s public sector. Representatives of the committee did not respond to requests for comment on when reviews of and recommendations on the new medicines would be made. DM/MC