Formula 1 success was built by people such as Frank Williams, says Ecclestone 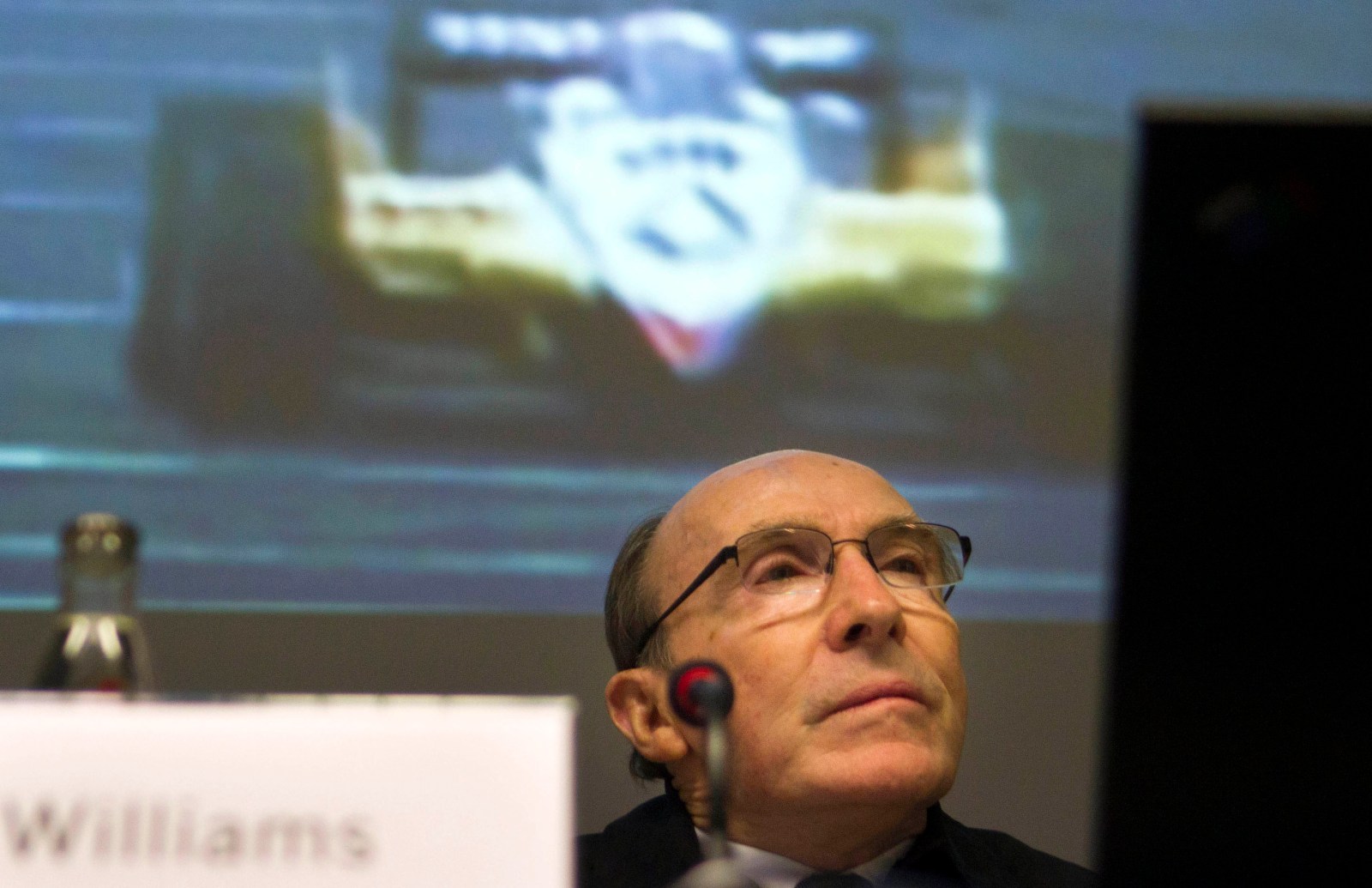 epa02573703 Company founder and head of the Williams team Sir Frank Williams at the stock exchange in Frankfurt Main, Germany, 10 February 2011. Williams is to become the first Formula 1 team to list on the stock exchange, the team said on 09 February 2011. The team is offering up to 2.74 million shares at a price of between 24 and 29 euros (32.70 and 39.50 dollars) and is hoping to raise 80 million euros. Team principal Sir Frank Williams said the future as an independent team would be guaranteed by the listing, which is due to take place in early March. EPA/FRANK RUMPENHORST

Former Formula 1 supremo Bernie Ecclestone paid tribute to the late Frank Williams as a pioneer who helped to build the modern sport and without whom it might have ceased to exist.

Williams had been paralysed since 1986 when, at the age of 43, his rental car crashed as he was speeding away from the Le Castellet circuit in the south of France where his team was testing. He died on Sunday at the age of 79, his family said.

The eponymous team he founded, still the second-most successful in terms of constructors’ championships and third-oldest, was sold to US-based Dorilton Capital in 2020.

Williams came from an era where title-winning teams were run by their founders, men such as Enzo Ferrari, Ken Tyrrell and Lotus boss Colin Chapman, who are all long gone.

“Without those types of people I doubt whether Formula 1 would have still been going now. Probably Ferrari would have stopped and that would have been it,” Ecclestone (91) told Reuters.

“There’s not many of the old timers floating around now – those that were with the teams when they started.

“You could buy an engine and a gearbox (in those days). You didn’t need to have multi, multi billions and have 1,000 people working for you.”

Ecclestone, who took over and ran the Brabham team in the early 1970s, recalled Williams as an old friend who got over life’s financial and physical obstacles with charm and determination.

“Frank was a little bit special as a person. And that sort of showed in the way he kept going,” he said. “Things were never really bad as far as Frank was concerned, he never complained about things. He got on with things the best way he could. And that’s the reason he was so successful. He was a racer through and through.”

Ecclestone recalled the obsessive physical fitness fanatic who before his accident would run for kilometres before dinner but also showed a keen eye for style.

“He was always ahead of the game. He knew about cashmere sweaters when I’d never heard of cashmere. That was Frank,” said the British billionaire.

“He’d talk about whatever and then just before he went he’d say, ‘I wonder if you could help me? Do you think you could lend me £2,500? I’ll pay you back in 10 days.’ And that’s how we worked with Frank. I would trust him with my life.”

Ecclestone also recalled sitting in hospital, after Williams had been flown back from France to London, with Formula 1 doctor, Professor Sid Watkins.

“I said, ‘How long’s this going to last?’ and he (Watkins) said, ‘I think he’ll be here for six months looking at the ceiling’. I said, ‘Is he going to survive all this?’ and he said, ‘I don’t think so’. And Sid really knew (the science).

“As usual Frank proved everyone wrong. They don’t grow them like Frank anymore.”

The sport’s chief executive, Stefano Domenicali, a former boss of rivals Ferrari, paid tribute to the Englishman and said the F1 family had lost a ‘much-loved and respected member’.

“He was a true giant of our sport that overcame the most difficult of challenges in life and battled every day to win on and off the track,” the Italian said.

“His incredible achievements and personality will be etched on our sport forever.”

One of the longest-lived quadriplegics, he responded to the physical obstacles by steering his team to ever greater success as he watched from his wheelchair in the team garage.

“As I see it, I have had 40 fantastic years of one sort of life,” he told his late wife Ginny after the accident. “Now I shall have another 40 years of a different kind of life.”

In 2012 he handed over the day-to-day running of the team to his daughter Claire, even if she was always officially deputy principal.

He was admitted to hospital on Friday and the British-based team said he “passed away peacefully this morning surrounded by his family”.

Under his leadership, the team won nine constructors’ championships and seven drivers’ titles, most recently with Canadian Jacques Villeneuve in 1997, and 114 Grands Prix – the last in 2012.

Australian Alan Jones, in 1980, was the first to win a drivers’ title in a Williams and he was followed by Finland’s Keke Rosberg in 1982.

Brazilian Nelson Piquet took his third title with the team in 1987, Britain’s Nigel Mansell celebrated his one and only in 1992 before Frenchman Alain Prost chalked up the fourth of his career in 1993.

Damon Hill, who led the team on track after the death of triple champion Ayrton Senna in a Williams at Imola in 1994, won the title in 1996 before Villeneuve completed the list.

“Sir Frank gave me such a chance in my lifetime that I am indebted to him forever,” said Hill. “He was a very important person to my career and also a huge contributor to our sport.

“His record will stand for a very long time. As an individual team owner, as a team founder, there won’t be another one again,” Hill told Sky Sports. “The only person I could compare him to is probably Enzo Ferrari.”

“What he achieved in this sport is something truly special. Until his last days I know he remained a racer and a fighter at heart. I have utmost respect and love for this man, and his legacy will live on forever,” said the Mercedes driver.

Williams entered the sport in 1969, providing a Brabham for compatriot Piers Courage to race, and set up Williams Grand Prix Engineering in 1977 with co-founder Patrick Head.