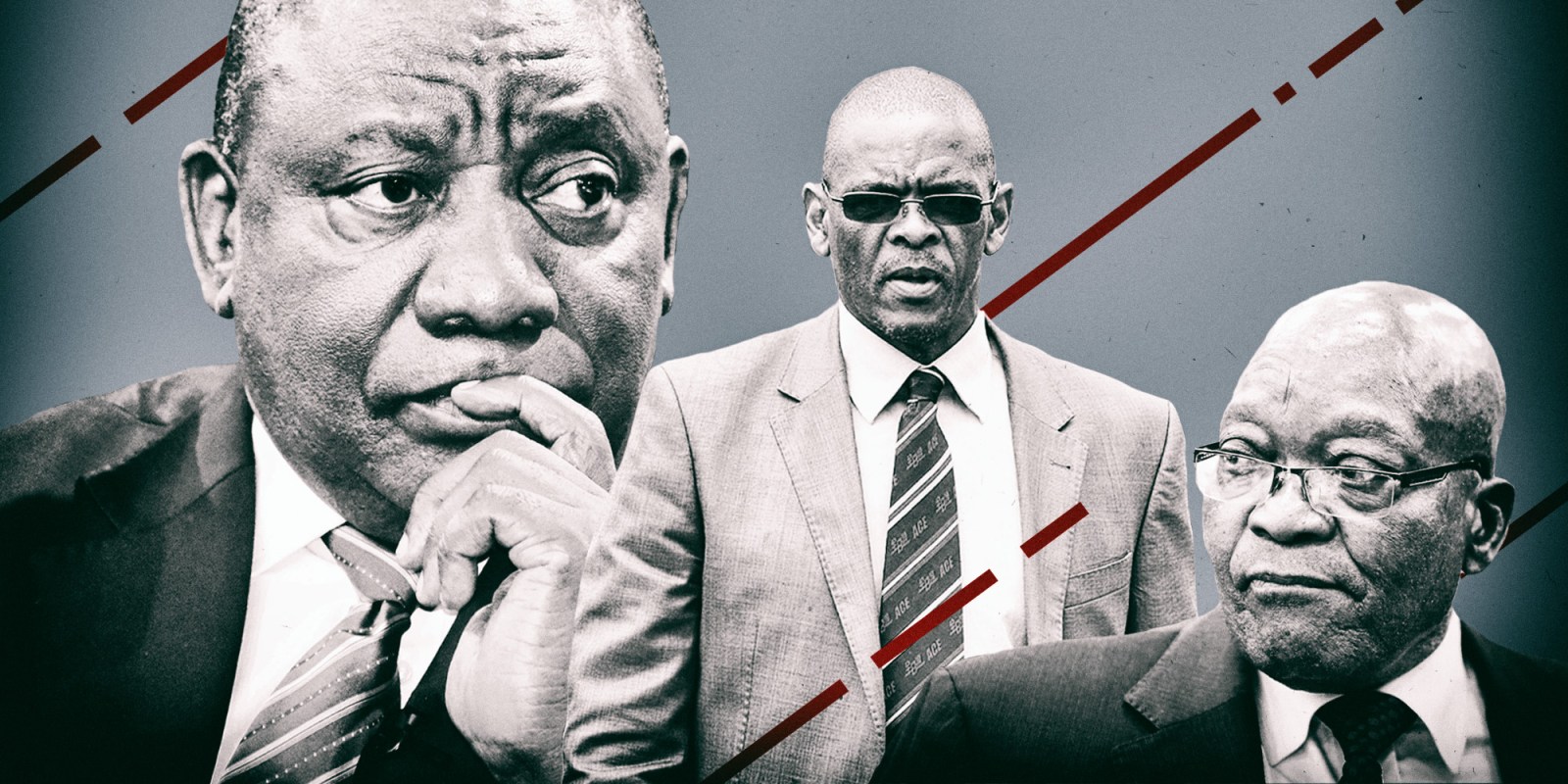 Coming ahead of what will be crucial national elections in 2024, the lost control, revenue and patronage opportunities will surely have a major impact on the ANC. In particular, it may finally bring to finality a long-evolving splintering process.

While it may be some time before all the consequences of the past two weeks in SA politics are fully appreciated, there can be no doubt that the ANC of Cyril Ramaphosa will suffer greatly from the loss of metros it thought it would control. The gap between the factions might soon become too wide to bridge.

One now needs to understand what is likely to be the real reason for Julius Malema’s decision to use the votes of EFF councillors to prevent the ANC from governing in important metros.

It is not clear, however, whether there is any candidate who could properly loosen Cyril Ramaphosa’s grip on the ANC presidency.

However, what does appear to be almost certain is that the ANC’s hold over the country, its automatic dominance, the way it has been able to control the outcome of processes, is now severely damaged, perhaps permanently.

While there are many dynamics at play, and our political situation is growing increasingly complex, it does now appear undeniable that the ANC is going through a process of splintering. That is to say, it appears that the party factions are pulling in their own, often opposite, directions.

Consider how often ANC members in provinces simply disobey orders from above.

Last week in Mamusa, North West, ANC councillors voted for an EFF speaker, before the voting process for mayor was stopped.

Similarly, in Nkomazi, Mpumalanga, ANC councillors also voted with opposition parties, electing an independent councillor as mayor; something similar appears to have happened in Mkhondo.

This is on top of the very public divisions on policy at higher levels. It is well known that the ANC’s national executive committee contains people who support and oppose Ramaphosa, people who want a market economy, people who espouse communism and the occasional liar and a crook.

There is no secret to this. Last year, former Ekurhuleni mayor Mzwandile Masina tweeted that he agreed with Malema that people should “let the white economy collapse” during the pandemic. He was publicly rebuked by Luthuli House for his comment. In 2017, he had said that he would resign if Ramaphosa was elected ANC leader, which has not happened.

Despite this, he was selected as the ANC’s candidate for mayor in Ekurhuleni this year (after being interviewed by a panel that surely included Ramaphosa). And thus the EFF had to encourage his “resignation”.

One of the dynamics that has held the ANC together is money. It is hard to doubt this, considering the evidence of corruption in the party (almost all of the Zondo Commission proceedings were testament to this; the way in which people make money from tenders in local government is obviously an essential component of this dynamic; the Digital Vibes scandal is another example, and there are so many others).

One of the biggest consequences of the 2021 local elections’ results, and thus Malema’s actions in denying the ANC power in Ekurhuleni, Joburg and Tshwane (where the ANC did not put up a candidate against the DA, presuming that it was going to lose anyway) is to deny the party both positions and patronage opportunities.

There are simply fewer positions for people in the ANC to occupy, which cuts off the supply of salaries and opportunities to make more money.

The importance of this cannot be overstated.

On Thursday, just after his election as eThekwini mayor, Mxolisi Kaunda had a picture taken with Zandile Gumede, who is facing corruption charges linked to her role as mayor. In a radio interview on SAfm, Kaunda refused to distance himself from Gumede and conveniently parroted the ANC line that people are “innocent until proven guilty”.

This shows how important these networks are, and how some in the ANC still seemingly do not connect their “alleged” corruption with the party’s poor results in these elections.

Malema claimed on Thursday that the EFF was “not here to revive the ANC, we are here to bury it”. By voting in the way he has, he may well have contributed significantly to that.

However, there is an important caveat to all of this.

As things stand, there are in fact no administrations in Joburg, Tshwane, Nelson Mandela Bay, Ekurhuleni, eThekwini and most councils. There are only mayors and speakers. The administrations have not actually been formed yet.

This is just one indicator of their fragility. Thus it may not be long before some of these administrations fall, enabling the ANC to move back into power, this time leading new coalitions in these metros.

What is important here is how long the ANC is out of power and whether it can come back at all.

After 2006, it was unable to get the DA out of Cape Town. But after being voted out in Joburg in 2016 it was able to win power again in 2019. If it can do this in these metros, then obviously the consequences of this week’s developments will be limited.

But this will depend both on developments within the ANC, the DA and the EFF, and sometimes even tiny parties. It is hard to make any predictions about if or when this could happen.

As mentioned before, Malema makes decisions that help those in the RET faction of the ANC. He continually makes claims against Ramaphosa (often without evidence), has had tea with former president Jacob Zuma, supported Public Protector Busisiwe Mkhwebane and suggested Western Cape Judge President John Hlophe would be a good chief justice.

Malema’s decisions will almost certainly lead to more pressure on Ramaphosa, thus making it harder for him to remain in power as the leader of the ANC, and as SA president.

The argument could well go like this: Ramaphosa has cost the ANC more than any other leader, it has lost most metros and is on track to lose power in national government — why should he remain?

This may have some basis. But it still does not answer the question: who in a badly damaged ANC could replace Ramaphosa and improve on his performance?

Also, while the ANC is already splintering under his leadership, it is likely that any serious challenge to him at the ANC’s presumably scheduled conference next year would only speed up this process.

Considering how close the ANC came to breaking up at Nasrec (particularly over the issue of land expropriation, which was serving as an avatar for the bigger factional fight for control of the party) it is entirely possible that a contested leadership race would lead to a high risk of the party splitting.

It is likely that the events of this week have actually significantly increased the chances of the ANC not surviving its next conference and that removing Ramaphosa would merely speed up the splintering process.

For some, this could indicate Malema would somehow come back to lead the ANC under these circumstances. But what would be left to lead? An ANC led by Malema, or anyone closer to him than Ramaphosa, would surely have even less support than it does now. As a leader of a supposed “anti-corruption party”, Malema’s appeal is severely limited. He will not become more palatable should he take over South Africa’s leading party — quite the opposite; he could end up dragging the ANC even further down.

Considering the stakes in 2024 and the possible, or even likely, introduction of coalition governance at national level, this might be a risky move.

Meanwhile, there is another indication of how badly the ANC has been weakened.

It seems unlikely now that the entire country will come to a halt again just because of an ANC national executive committee meeting. No longer will these gatherings have the power they did, because the ANC no longer has the power it once had.

No longer can the party bully private companies or banks because of public campaigns it undertakes (such as it once did with FNB). It may also have permanently lost the ability to bully the public broadcaster into reporting anything less than the facts.

All of this is an indicator of how it has lost power, in so many different ways.

For the moment, it appears that this process may well be one that is impossible to stop. DM