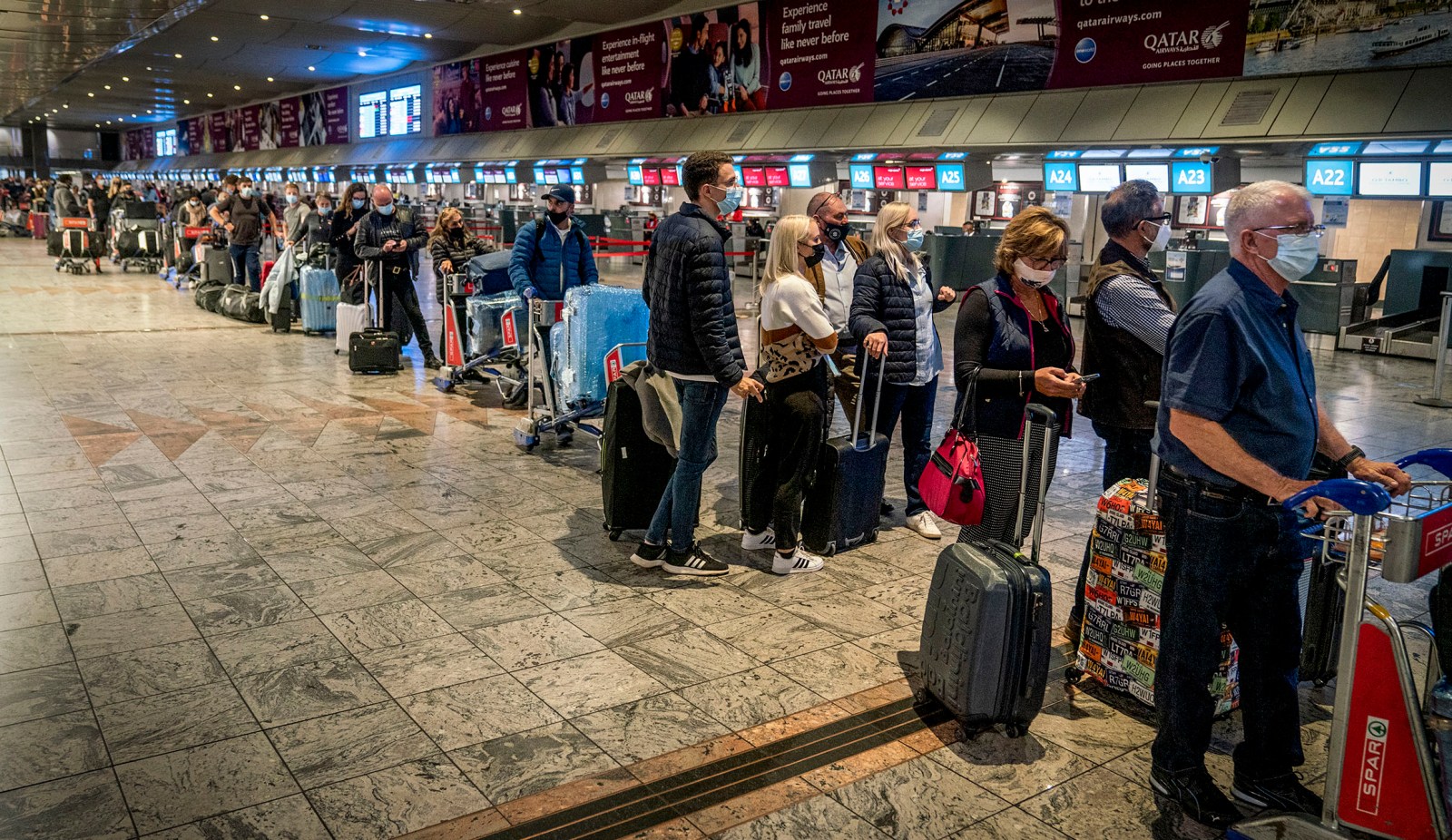 Stranded passengers at OR Tambo Airport international departures in Johannesburg on Saturday, 27 November. Several airlines announced the suspension of flights in reaction to news of the Omicron coronavirus variant. (Photo: Shiraaz Mohamed)

‘Nobody told them anything,’ said a security guard. ‘These people didn’t know anything. They just came here to find their flights were cancelled.’

It is Friday afternoon at Johannesburg’s OR Tambo International Airport and screens in the international boarding area announce that flights to Heathrow are cancelled. This follows the announcement of the Omicron variant of the coronavirus.

The UK has suspended all flights to and from South Africa and there are no staff at the British Airways boarding gates.

Not very far away, women dressed in red Virgin Atlantic uniforms are stationed behind their computers. Their male colleague, dressed in black, holds up a sheaf of papers with the Virgin Atlantic logo – alerting passengers to the travel ban. He talks to a woman; she seems perplexed. Her travelling partner stands less than 2m away, both are glued to their phones a few moments later.

At the viewing deck, a man holds a bunch of proteas. He is waiting for his wife to land.

“Considering the state of the world at the moment, it’s better to be safe than sorry,” he says.

“With new variants, we don’t know what the repercussions are. We don’t know if the current vaccines are good. It’ll keep us safe enough. So I don’t blame them for [halting travel to and from SA]. That being said, I hope we can learn about the new variants fast so that we can open up travel to be able to go there again.”

However, another man said: “With the pandemic we are all facing the same problem; to just disconnect one country from entering the UK is not fair. We were told that we would be allowed to enter a country on presentation of a negative Covid test. This is really not fair.”

Back inside the boarding area, a huge crowd waited in a line that stretched for a few hundred metres at the Turkish Airways gate. Among them was Celeste Richard, who said she was hoping to get into the UK from Turkey and that she was employed to look after two elderly women in the UK. She was due to start work on Monday.

“I am hopefully going to be boarding now. I’ve heard that the gates close on Sunday at 4am. It’s heartbreaking, people are devastated. Just before Christmas, it’s really sad. I hope I will be able to get on board.

“But if I can’t get on board now my mom will have to come and fetch me and I will be unemployed, waiting to go back to the UK.”

On Saturday, more airlines suspended flights to and from South Africa. The international departures area seemed busier than the previous day.

“Nobody told them anything,” said a security guard. “These people didn’t know anything. They just came here to find their flights were cancelled.”

He pointed at the arrivals and departures screen. “Look, that is how they found out, and they are not yet fully updated.”

One would-be traveller said it was unprofessional of Emirates not to inform passengers of the flight suspensions. She said people in her group had travelled from as far as KZN and Cape Town and had to return home after learning their flights had been cancelled.

People formed a line that stretched out for a few hundred metres as they waited to find alternative flights. Said Elena, a Spanish citizen: “I feel so frustrated because there is nothing I can do. I need to get to Spain via Germany and because I am not a German citizen I cannot fly to Germany.

“They [the airline] said you can queue here and see for alternative flights or where we can send you, but everything is fully booked. You cannot buy a new ticket. I have to wait here until they say where I can fly to. There is nothing else I can do except wait.”

She spent the night in a hotel and was able to leave South Africa on an Ethiopian Airlines flight the following day.

A group of people waited outside the Swissport ticket sales office in an attempt to get tickets. One of them, Jacque de Wet, was visibly upset.

“I need to get to America as soon as possible, otherwise I might be stuck in South Africa till February,” he said.

“I personally feel South Africa should stop DNA sequencing on the viruses, because every time we do that and we tell the world about a new variant they shut us down even though the variant is in other countries.”

Maria Sandu from Romania stood outside the Turkish Airlines gates after being told passengers were unable to board.

“We were supposed to fly today. They cancelled the flights, but changed it to repatriation flights, so only Turkish citizens are allowed to check in.”

Sandu and her children were on a three-week holiday in South Africa.

“We tried other airlines,” she said, “but they are fully booked and the prices are so expensive. Lufthansa wants R22,000 and a flight to Addis Ababa is R33,000. We need to fly to Addis and then Istanbul before flying to Romania. It is a 23-hour flight.

“I don’t know what we will do. I think we will have to make another hotel reservation. We don’t know for how long though.”

At the Emirates check-in desk, flight attendants and pilots waited to be checked in.

“We are travelling as passengers,” said a pilot as he waited behind a group of flight attendants to check in.

“We are fortunate. We are getting on the last flight out of South Africa. But I do hope that by next week all of this is over and we will be able to return.”

On Sunday afternoon Sandu sent a WhatsApp message reading, “Hi there, we are still here.” It was accompanied by a crying face emoji.

She said the Romanian government was trying to get a flight for her family and other Romanian citizens (about 39 of them), and hoped to leave South Africa by Tuesday.

She was still looking for flights and shared a screengrab from the Air France website showing the cheapest flight to Bucharest cost  R23,746.

“As I told you yesterday, the prices are crazy,” she messaged. DM