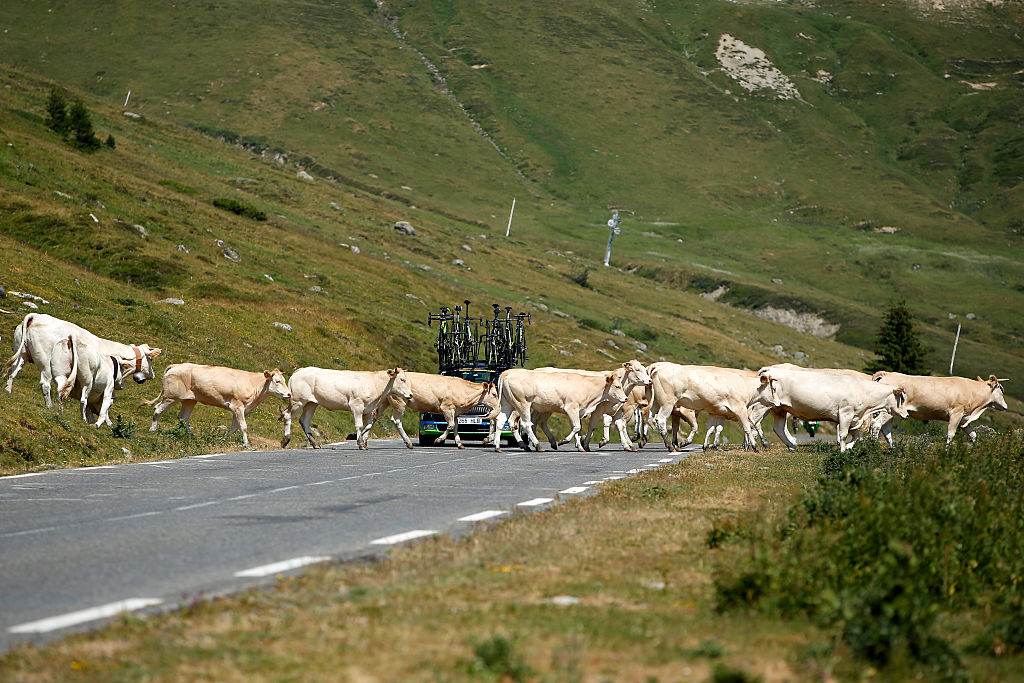 Cows cross the road and block a team car on the descent of the Col du Tourmalet during stage eleven of the 2015 Tour de France, a 188 km stage between Pau and Cauterets, on July 15, 2015 in Cauterets, France. (Photo by Doug Pensinger/Getty Images)

When world leaders gathered for the COP26 summit in Glasgow, there was much talk of methane emissions and belching cows. The Global Methane Pledge, led by the US and EU and now with many country signatories, aims to reduce methane emissions by 30% by 2030. This is seen as a “quick win” to reduce global warming and will have major implications for livestock production.

Livestock have become the villain of climate change. Some researchers claim that 14.5% of all human-derived emissions come from livestock, either directly or indirectly. There have been widespread calls for radical shifts in livestock production and diet globally to address climate chaos. But which livestock, where? As a new report I co-authored argues, it is vitally important to differentiate between production systems.

Not all milk and meat is the same. Extensive, often mobile, pastoral systems – of the sort commonly seen across the African continent, as well as in Asia, Latin America and Europe – have hugely different effects to contained, intensive industrial livestock production.

Yet, in standard narratives about diet and production shifts, all livestock are lumped in together. Cows are misleadingly equated with polluting cars and beef with coal. The simplistic “all livestock are bad” narrative is promoted by campaign organisations, environmental celebrities, rich philanthropists and policymakers alike. Inevitably, it dominates media coverage. However, a much more sophisticated debate is needed.

Our report delves into the data and highlights the problems with using aggregate statistics in assessing the impacts of livestock on the global climate.

Some types of livestock production, especially those using industrial systems, are certainly highly damaging to the environment. They generate significant greenhouse gas emissions and cause serious water pollution. They also add to deforestation through demand for feed and expanding grazing areas, for example. And, reducing the amount of animal-source foods in diets, whether in the global north or south, makes much sense, both for the environment and for people’s health.

But industrial systems are only one type of livestock production. And aggregate emission figures do not pick up the nuances of this reality. Looking across life-cycle assessments – a technique widely used to assess the impacts on climate change from different agri-food systems – we found some important gaps and assumptions.

One is that global assessments are overwhelmingly based on data from industrial systems. A frequently quoted paper looking at 38,700 farms and 1,600 processors only focused on “commercially viable” units, mostly from Europe and North America. However, not all livestock are the same, meaning that global extrapolations don’t work.

Research in Kenya, for example, shows how assumptions about emissions from African animals are inaccurate. Such livestock are smaller, have higher quality diets due to selective grazing and have physiologies adapted to their settings. They are not the same as a highly bred animal in a respiration chamber, which is where much of the data on emission factors comes from. Overall, data from extensive systems are massively under-represented. For instance, a review of food production life cycle assessments showed that only 0.4% of such studies were from Africa, where extensive pastoralism is common across large areas.

Another issue is that most such assessments focus on emissions impacts per animal or per unit of product. This creates a distorted picture; the wider costs and benefits are not taken into account. Those in favour of industrialised systems point to the high per animal methane emission from animals eating rough, low-quality forage on open rangelands compared to the potential for improved, methane-reducing feeds in contained systems. This misses the point: a wider, more integrated systems approach must encompass all impacts, but also benefits. For instance, some forms of extensive grazing can potentially increase soil carbon stocks, adding to the already significant store of carbon in open rangelands.

Then there’s the fact that methane and carbon dioxide have different lifetimes in the atmosphere and are not equivalent. Methane is a short-lived but highly potent gas. Carbon dioxide sticks around in the atmosphere effectively forever. Reducing warming can be addressed in the short term by tackling methane emissions, but long term climate change needs to focus on carbon dioxide. It therefore makes a big difference how different greenhouse gases are assessed and how any “global warming potential” is estimated. Simply put, cows and cars are not the same.

It also matters what baseline is used. Pastoral systems may not result in additional emissions from a “natural” baseline. For example, in extensive systems in Africa domestic livestock replace wildlife that emit comparable amounts of greenhouse gases. By contrast, industrial systems clearly generate additional impacts, adding significant environmental costs through methane emissions from production, the importation of feed, the concentration of livestock waste and fossil fuel use in transport and sunk infrastructure.

Animal-source foods are also vital for nutrition, providing high-density protein and other nutrients, especially for low-income and vulnerable populations and in places where crops cannot be produced.

Across the world livestock – cattle, sheep, goats, camels, yaks, llamas, and more – provide income and livelihoods for many. The world’s rangelands make up over half the world’s land surface and are home to many millions of people.

As countries commit to reducing methane emissions, a more sophisticated debate is urgently needed, lest major injustices result. The danger is that, as regulations are developed, verification procedures approved and reporting systems initiated, livestock systems in Africa and elsewhere will be penalised, with major consequences for poor people’s livelihoods. DM/ML

Ian Scoones is a professorial fellow at the Institute of Development Studies.