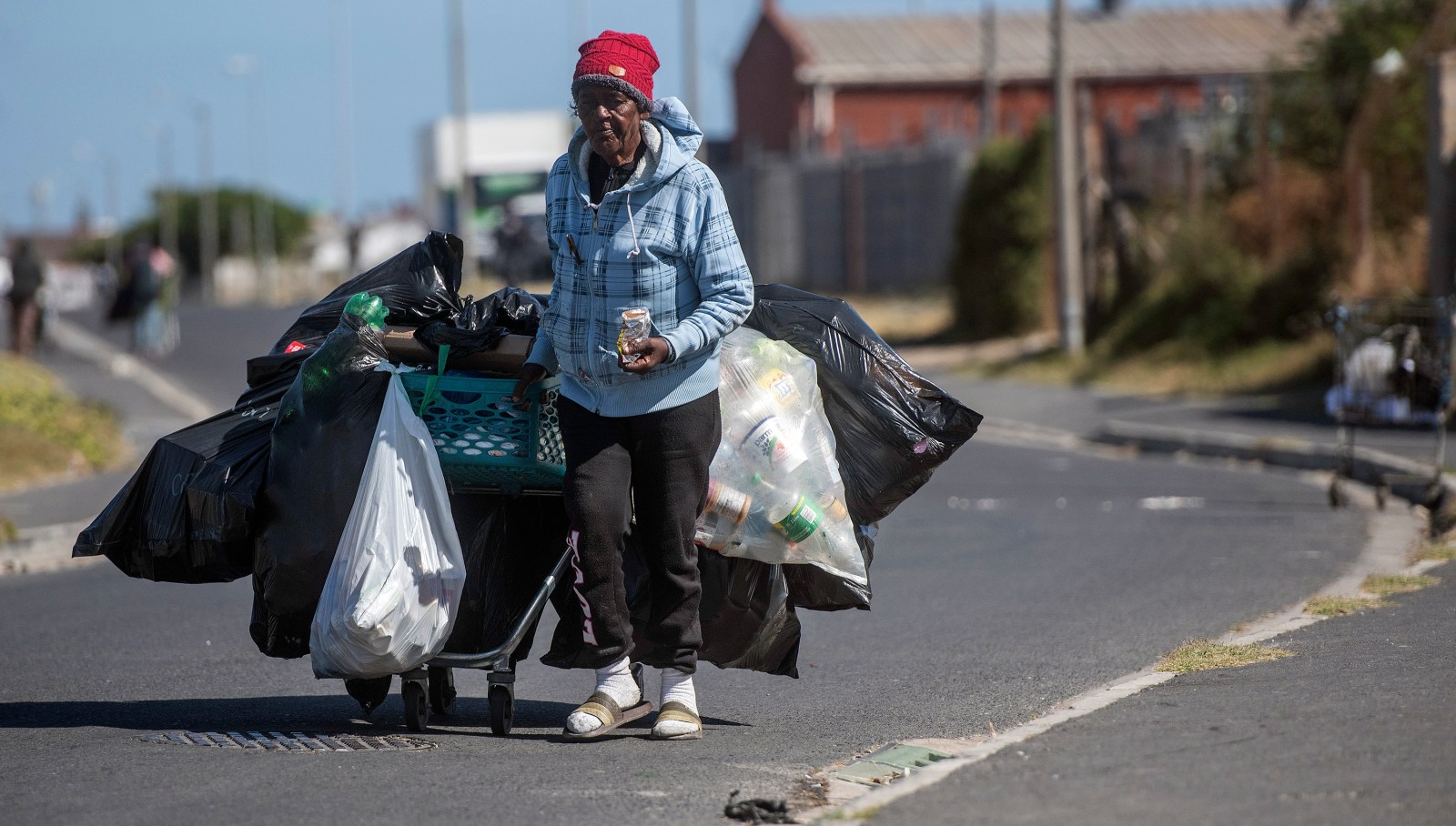 Louise Africa (62) on 22 November 2021 has been on the streets for more than 30 years. She said skarreling is dangerous after being hit by a car while pushing a trolley filled with recyclables. (Photo: Brenton Geach)

Skarreling, as Carlos Mesquita from the Rehoming Collective explains, is 'whatever activity a homeless person decides upon to earn his or her keep'.

Outside MK Recycling in the Cape Town suburb of Retreat, a long line of waste pickers has gathered, pushing trolleys laden with recyclables from their daily skarrel.

Among them is 62-year-old Louise Africa, who began collecting items at 5.30am. Her only source of income is the plastic bottles, tin cans and other scrap materials she brings to the yard to exchange for cash.

Each day, she walks to a different suburb to collect her wares. On this day, her search takes her to nearby Grassy Park.

Getting there was extra laborious for the elderly woman, who was the victim of a minor hit-and-run when she was pushing her trolley across a busy road last month. She says these are some of the risks of being a skarreler, but the R105 she can earn on a profitable day is worth her troubles.

“I must be clean, I must eat and I must smoke my cigarettes,” Africa says.

Anything she collects, she delivers to the recycling depot on the same day. “I never stop, I’m always working,” she says. “Only holidays and Christmas I rest.”

Skarreling, as Carlos Mesquita from the Rehoming Collective explains, is “whatever activity a homeless person decides upon to earn his or her keep”. This includes waste-picking (skarreling from bins), washing and guarding cars, doing handy work, and other odd jobs.

A report by the Inkathalo Conversations, a public participation process commissioned by the City of Cape Town to explore the problem of homelessness in the metro, found that the skarreling economy can place as much as R1-million a week in the hands of homeless people in the larger metro.

“We skarrel until 11 o’clock until we go to sleep at night time,” he says. “Sometimes we must work through the night.”

Inkathalo estimates that waste-picking generates about R2.2-million a month for the Cape Town’s skarreling community. On average, that’s R1,100 per waste picker a month (at R50 a day for 22 working days).

Waste-picking has also proven beneficial for the recycling industry.

Nationally, the United Nations Industrial Development Organization (Unido) estimates that South Africa has about 60,000 waste pickers from both the formal and informal sectors who are responsible for up to 90% of the country’s recycling output. Without them, the industry would likely collapse.

The CSIR estimated that, in 2014, waste pickers saved municipalities R749-million in landfill space.

Skarrelers are often viewed as a nuisance, dirty, drug addicted and often associated with criminal activity.

Mesquita, who lived and skarreled on the streets of Sea Point for five years, admits that a portion of the money he earned from selling repaired electronic items in the CBD went towards feeding his drug habit.

“I would do the drugs, which is what would keep me going through the night so that I would go and skarrel some more,” he tells DM168.

For Mesquita, skarreling helped him maintain his dignity when he was living on the streets. “I never had to beg, never had to steal and I never had to borrow because I always had money from trading in the bin business.”

Twenty-five-year-old Shane Jacobs says skarreling keeps him “out of trouble” and helps him provide for his family.

“This keeps you safe from gangsterism, the gunshots and knife stabbings,” he says.

Wilma Piek, the social development manager for the Voortrekker Road Corridor Improvement District (VRCID), says law-enforcement officers complain that waste pickers often have stolen goods in their possession or steal trolleys to use for skarreling.

Piek says that, although criminals do infiltrate the waste picker community at times, the narrative that “they are all criminals” is not true.

“Of course, they are also victims of the criminals because they will recycle stuff and also get robbed,” she says.

The VRCID has introduced two initiatives to formalise skarreling activities in Bellville. The first is a car-guarding project at a local shopping centre where they limit the number of street dwellers who can operate there. Each person is provided with a bib, on to which their photo is printed. Car guards are required to have an ID (they assist those without to apply for documents) and to undergo a criminal background check.

The second initiative is a trolley and recycling project in Bellville, which is now managed by the Greater Tygerberg Project.

After complaints from business owners that waste pickers were stealing their trolleys, the project provided some homeless people with their own, which were donated by Petco.

Businesses are also encouraged to keep all their recyclables for the waste pickers. Between July and October this year, more than 11 tonnes of waste were recycled through the project and waste pickers earned R14,217.

Skarrelers often knock heads with law-enforcement officers who confiscate their goods in an attempt to enforce the city’s by-laws or if they suspect the goods are stolen.

During the Inkathalo dialogues, it was alleged that valuable stock was taken during raids by law-enforcement officers.

A trading permit is required to sell goods through a stall or booth. Obtaining one is often a challenge for people living on the street, who are hindered by red tape and by not having documents.

Inkathalo found that law enforcement confiscated homeless people’s goods if they were trading without a permit or that the officers would destroy their stalls.

Where street dwellers are able to obtain permits, storing their goods is an additional challenge. The City of Cape Town does not provide storage for informal traders and goods are often stored at other business premises at high premiums.

Business owners and homeowners were another obstacle. Inkathalo found, in some instances, that homeowners would deliberately hide dangerous items – such as broken glass – in their bins to injure skarrelers.

In Sea Point, there were alleged incidents of homeowners commanding their dogs to attack skarrelers, or private-security companies blocking off access to suburban roads.

“You’re up against residents who don’t want you to be in their bins and so they basically lock their bins, but there are those that do decide to put out their bins to lure you and then they throw bottles at you from their verandahs two storeys up,” says Mesquita.

People outside the homeless community have realised that skarreling can be lucrative. Mesquita notes that employees on waste removal trucks will sometimes block skarrelers from scratching in bins that they suspect may contain valuable items.

Caretakers and security guards at building complexes sometimes also go through bins to claim high-value items before they place the bins out on the street.

“There is so much competition at the moment,” Mesquita says.

For Sharlene George, who struggles with back pain, skarreling leaves her feeling exhausted. But waste-picking is still worthwhile as it helps her to feed her eight children and put them through school.