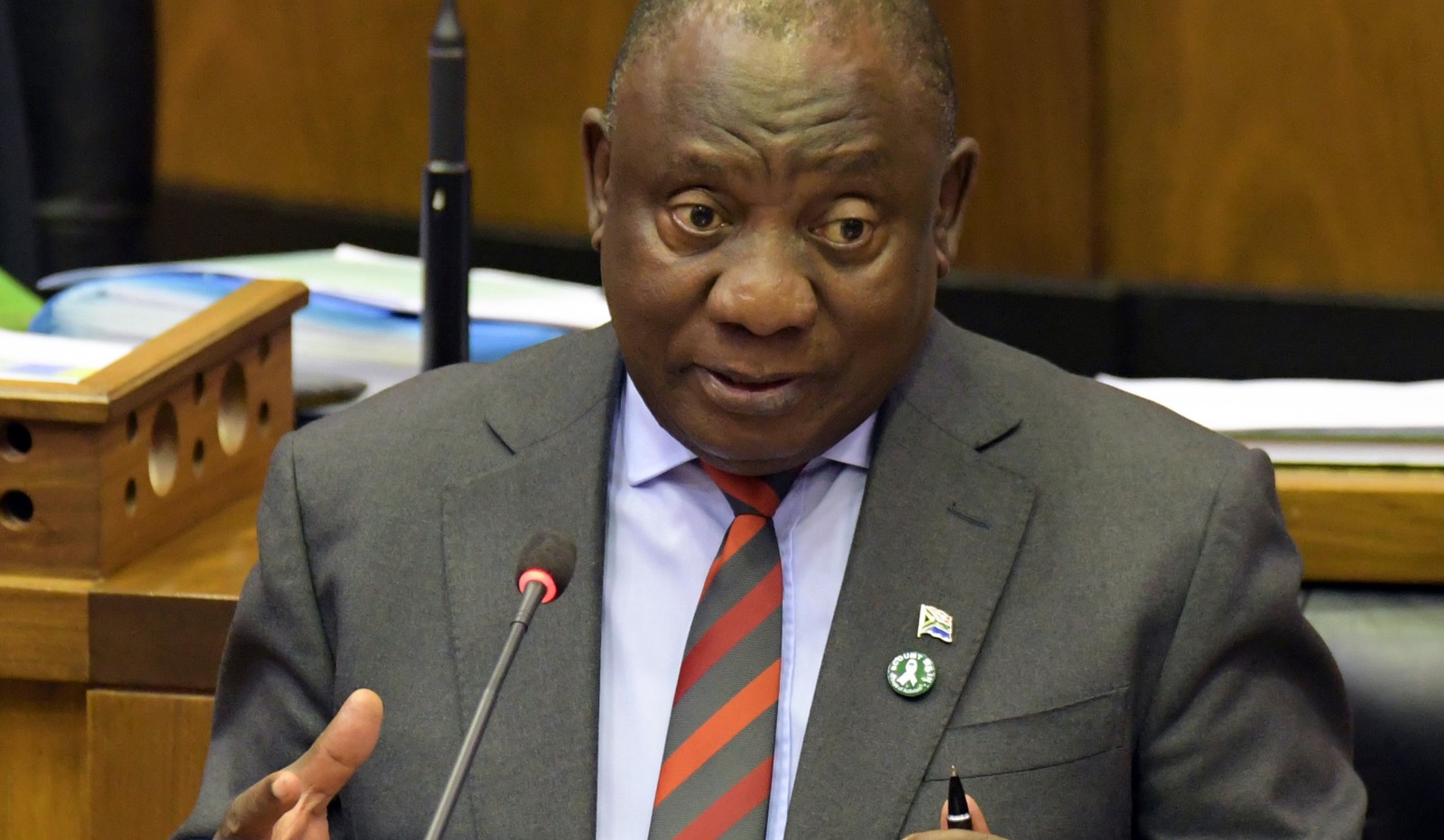 President Cyril Ramaphosa has told Parliament that the R131bn commitment from developed nations ‘does not mean that we need to accept… the offer or any unfavourable terms, especially in the financing arrangements’.

Answering questions in Parliament on Thursday, President Cyril Ramaphosa reaffirmed the government’s intention to pursue a just energy transition, saying that his administration would not surrender their sovereignty or compromise the public purse as they welcome multilateral financing agreements to accelerate South Africa’s decarbonisation agenda.

Daily Maverick previously reported that a partnership of the European Union, Germany, France, the UK and the US pledged R131-billion over the next three to five years in the form of grants, concessional loans and investment and risk-sharing instruments, including mobilising private sector funding for South Africa’s accelerated transition from coal to clean energy.

Responding to a question by the leader of the Economic Freedom Fighters, Julius Malema, Ramaphosa explained the context of what he called an “initial commitment” by the developed nations.

“We now have a climate that is changing, but the unfortunate part of it is that it is changing for all of us. They [developed nations] damage the climate and we are now paying for the damage… and its effects are being felt by those who participate least in effecting that damage.

“We now have strange climatic phenomena that have an effect on our own continent, in our own region… floods that even our forebears never saw before, droughts that go on for years and years…

“And the damage is not only — if you like — on the landscape of our country… the health conditions of many of our people, particularly in our coal mining areas and electricity generation areas is just continuously at risk because of reliance on fossil fuels.”

A recent leaked Council for Scientific and Industrial Research (CSIR) study obtained by Reuters showed that “…more than 5,000 South Africans die annually in the nation’s coal belt because the government has failed to fully enforce its own air quality standards… nearly a quarter of households in the region, where 3.6 million people live, have children with persistent asthma”.

“Here too they’ve been dilly-dallying and not being too willing to make real commitments,” said Ramaphosa of developed nations most responsible for causing the climate crisis.

“We must make sure that they live up to the commitments they have made,” he said, “and in doing so… we should not short-change ourselves.

“We should not enter into agreements that are going to be detrimental to our own developmental path. If, for instance, in addressing the transition, say for instance of an Eskom in a power station town, we must make sure that the workers’ situation is looked after and the communities as well. The livelihood of communities must also be factored in.

“We will want to approach this whole process in a holistic manner so that our people benefit and they are not left behind.”

In a prepared response to a tabled question, Ramaphosa said that “…climate change is an existential crisis that we face — as many other countries are facing around the world — as a country.

“We are — we should remind everyone — a signatory to the Paris Agreement to combat climate change and such. We do have obligations as South Africa to contribute our fair share to reducing greenhouse gas emissions.

“The Paris Agreement places an obligation on developed economies that are responsible for some 76% of historical emissions, to provide support to developing economies to adapt to the effects of climate change and transition to a lower-carbon future.”

The United Nations Framework Convention on Climate Change notes that the Paris Agreement “calls for financial assistance from Parties with more financial resources to those that are less endowed and more vulnerable” in accordance with the principle of “common but differentiated responsibility and respective capabilities”. 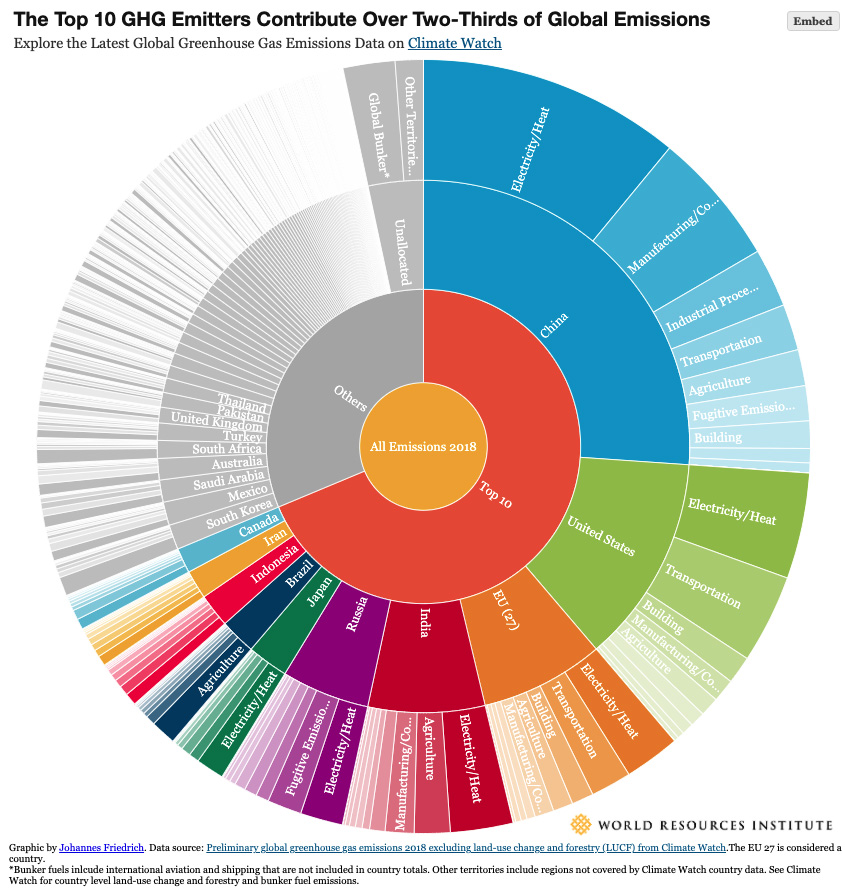 Ramaphosa continued that, “This is an initial commitment, and it is an offer that has just been put on the table, which may increase as discussions progress and further funds are identified.

“This commitment from the international partners does not mean that we need to accept firstly the offer or any unfavourable terms, especially in the financing arrangements.

“The pace and extent of decarbonisation in South Africa will be determined by the financial support that will be available and will take account of our own country’s social and economic challenges.

“A significant portion of funding is expected to be used for Eskom’s just transition plans, which includes the decommissioning of some of the power stations whose life has come to an end. And ordinarily, they would have been decommissioned and that would have been the end. The town would close…. With funding, we will be able to recalibrate those power stations, repower them, repurpose them.

“More importantly, the declaration recognises that a transition to a lower-carbon economy must also address the needs of workers as well as the needs of communities that reside in areas where our power stations are.”

Advocate Thabo Mokoena, director-general of the Department of Mineral Resources and Energy, in a recent opinion piece, said that a just transition is part of South Africa’s energy masterplan — the Integrated Resource Plan.

“We believe that retrofitting existing coal-powered plants with nuclear systems and/or natural gas feedstock is cost-effective and would ensure continued economic development in areas where the current majority of South Africa’s electricity sector depends on those installations. It would also reduce the need for rapid expansion of grid infrastructure,” Mokoena wrote.

“Through this plan, Eskom seeks to continue utilising the transmission infrastructure to generate electricity while continuing to extend economic opportunities to the communities that have hosted Eskom’s and South Africa’s industrial development over the past 100 years.”

The president continued, in his answer to Parliament, that: “Funding offered through the political declaration will be used for targeted programmes of rescaling, of upscaling, creating employment and providing other forms of support to ensure that workers, women and young people are the major beneficiaries of our shift to a greener future.

“Now this is where our key role-players, trade unions, business, communities, now have to buckle down and properly design what this transition is going to be and what the key elements of that transition should be so that out of this transition we should be able to leave no one behind.”

Of the offer of the R131-billion, he said that, “A joint negotiations team will be established. We will have top-class financial people from both the public sector as well as the private sector and will include trade union representatives as well who are going to buckle down and make sure that all these elements of this transition are properly negotiated.” DM/OBP