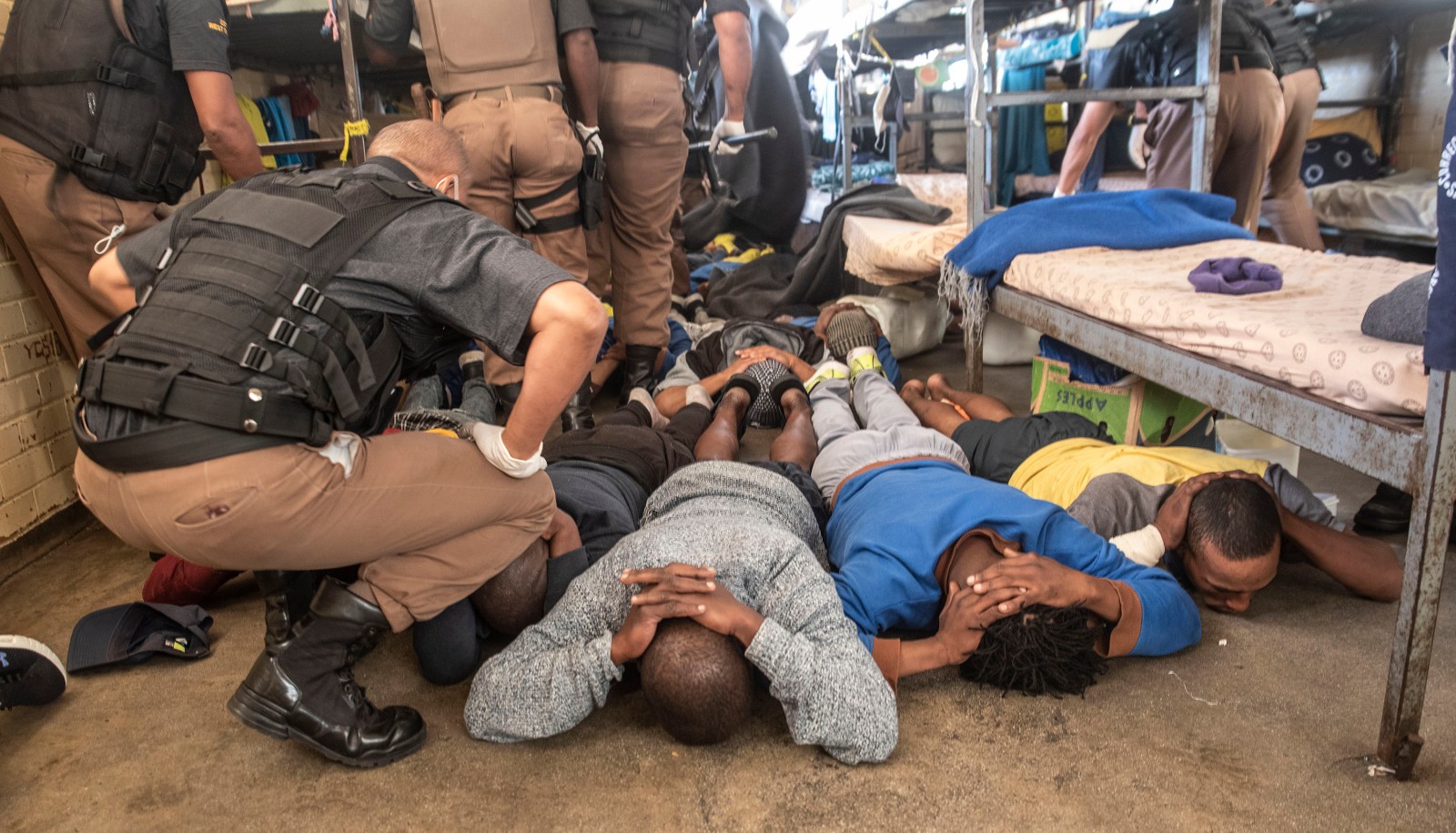 At 5am on 26 November 2021, correctional services officials confiscated a variety of knives, weapons, drugs and cellphones while searching cells for contraband at Pollsmoor Prison — the largest prison in the Western Cape.

At the time of writing, Singabakho Nxumalo, spokesperson for the Department of Correctional Services, could not confirm how much contraband had been confiscated as officials were still consolidating the information.

Pollsmoor Prison has about 8,000 inmates and is notorious for overcrowding and gang violence.

During the raid, inmates lay down outside their cells with their hands on their heads and their masks on. Inmates were instructed not to speak to one another while the search was conducted.

The raid took place a few hours before the official launch of the Department of Correctional Services’ Festive Season Security Operations (FSSO) at the prison.

The FSSO launch was held at an open field on Pollsmoor’s grounds, where Department of Correctional Services officials congregated in tents.

An exhibit of about 50 confiscated items was placed on display, including scissors, spoons, forks and cellphones.

The launch was punctuated with music by correctional service and SAPS members, while inmates played marimbas before the formalities began.

Thobakgale said that the festive season marked a period of increasing crime in South Africa. “This is the time that those who want to take the opportunity of committing crime heighten their activities,” said Thobakgale.

Thobakgale added that on the day before the raid, officials visited parolees in different communities in Cape Town to ensure that they were complying with their parole conditions, said Thobakgale.

Thobakgale said that Friday’s raid, which was conducted over several hours, forms part of the Department’s “standard operating procedure”.

“Our facilities are not supposed to have illegal substances and dangerous weapons that are used to intimidate, assault and interrupt rehabilitation,” said Thobakgale.

“Those found with contraband will be disciplined within the facilities’ code of conduct and we will make sure that they are brought to book,” said Thobakgale.

Thobakgale stressed that although cell searches are important in ensuring that inmates weren’t in possession of dangerous items and illegal substances, it was also important for officials to be routinely searched.

“This morning, we also conducted searches on our own officials when they were coming in for work. This is also a stark reminder that we should self-introspect and serve as the best example here and for our communities,” he said.

During the Covid-19 lockdown of 202, when inmates were denied visitors, an inmate at Pollsmoor lodged a complaint claiming officials had been receiving “special treatment”, enabling them to sell contraband and cellphones to inmates.

Among the accused was the area commissioner at Pollsmoor prison, Ntobeko Mketshane. Mketshane was suspended following a disciplinary hearing.

Nxumalo confirmed that Mketshane is currently still on suspension.

Speaking at the event, Hlophe gave a message of support to the Department of Correctional Services, saying that it was everyone’s duty to ensure we live in a safer South Africa but to also remember that “criminals are getting wiser and wiser”. DM