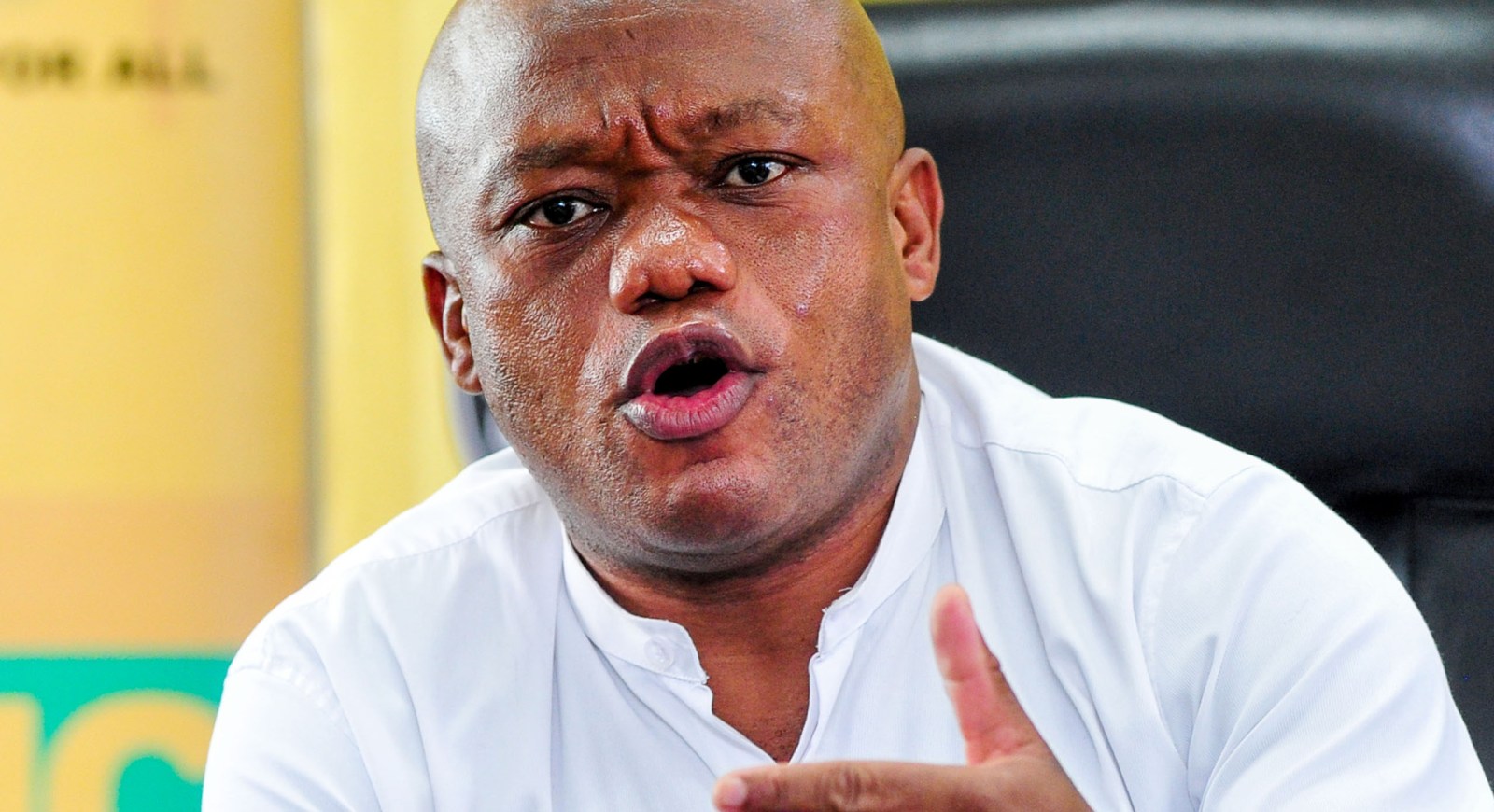 KZN premier Sihle Zikalala told the SAHRC that government had to rely on social media as a means of intelligence during the July 2021 riots across the province. (Photo by Gallo Images/Darren Stewart)

Giving testimony, Sihle Zikalala said the state relied on social media and mainstream media reports in order to comprehend the scale of looting and unrest in the province. He also pointed to the jailing of former president Jacob Zuma as being the catalyst for the mass anarchy.

KwaZulu-Natal premier Sihle Zikalala told the South African Human Rights Commission (SAHRC) on Friday that the provincial government was caught completely off guard by the escalation, spread and scale of the deadly July riots, and that the South African Police Service (SAPS) and other law enforcement agencies had not offered any early warnings of such.

Assessments had been done by law enforcement and shared with him about the possibility of unrest in Nkandla associated with the sentencing and arrest of former president Jacob Zuma, said Zikalala, but there was no forewarning of the wider violence that spiralled from that.

“Before the outbreak, there was no information received from any crime Intelligence structure (State Security Agency or other) on the imminent threats in KwaZulu-Natal indicating its extent, nature and the need to prepare the security cluster response accordingly.

“This means that while the premier ordinarily receives regular security briefings, no briefing had ever warned of the impending largescale events that took place during July 2021. It is also worth reporting that the province did not at the time have a head of SSA.

“As leaders of government we too relied on social media and mainstream media reports for updates and through a pamphlet that called for a planned shutdown,” said Zikalala.

When asked by evidence leader Buang Jones if he had met with former president Jacob Zuma about possible unrest at the former president’s home, the premier said he had. “[I met with him] on the Saturday of the week leading to his incarceration, at his Nkandla homestead”.

The two had “engaged” and their take as “leaders” was that “we should try to ensure there was no bloodbath”.

Hundreds of Zuma’s supporters had gathered outside his Nkandla homestead days prior to his arrest on contempt of court charges, where they were open about how they would defend the former president with their lives from any attempts at incarceration. Social media platforms were also awash with messages of support for Zuma, and open threats were made that there would be hell to pay if he was arrested.

At this time, he had “engaged through the media” with KZN citizens, said Zikalala, calling on Zuma’s supporters to desist from illegal gatherings or protests, and urging calm.

Asked Jones: “Would you agree that following the sentencing of the former president, an opportunity was missed by the police to conduct a thorough threat and risk assessment which could have prevented the unrest and looting?”

“I believe so,” replied Zikalala. “The police and others within the security cluster should have done so.”

Zuma was speedily transported by his presidential security unit to Estcourt Correctional Centre in the early hours of 8 July, and by late that evening, media had already started receiving reports of trucks being attacked on the N3 highway, along with reports of other sporadic incidents of violence throughout the province.

The torching of trucks in KwaZulu-Natal along the Mooi River toll plaza stretch of the N3 is not uncommon, but is usually associated with local drivers who belong to the ANC’s Radical Economic Transformation faction. They are known to torch and loot the long haulers in protest of foreign nationals being employed as drivers.

The provincial government has been “engaging” with the local drivers for years to “address their concerns” and try and quell the violence, but it is yet to stop.

On 9 July, at least 20 trucks were looted and torched along the Mooi River stretch.

Jones asked Zikalala if he thought SAPS could have handled the protests that started with truck attacks on the night of 8 July better, given that the modus operandi of the protestors would have been known.

“Yes,” said Zikalala, “but I must qualify, we were of the view we were dealing with the situation [as we thought it was the truck drivers again]. The issue of the arrest of the president took us [by surprise] as [we were told] it would only affect Nkandla and surrounds. I think while police should have focused on Mooi River, the more concentration was unfortunately around Nkandla.”

It was only when messages were posted to social media that the provincial government realised that the attacks on trucks were linked to the jailing of Zuma, Zikalala had said.

The “overwhelmed” police have been severely criticised for their absence during the riots and looting, which left communities in townships and suburbs having to defend themselves, their businesses and shopping centres via impromptu patrol groups. Such was the extent of the looting and the blockading of delivery routes — perpetrated by thousands — that the province suffered shortages of food following the unrest.

Earlier in proceedings, Zikalala had termed the eight days of turbulence as “one of the most embarrassing moments in the history of our province, having led to the massive destruction of infrastructure, and the erosion of many of the gains in the economy over recent years”.

“The burning of trucks may have taken place after the former president entered the gates of Estcourt prison, but tensions had already been building up since 29 June after the decision by the Constitutional Court ordering a custodial sentence,” Zikalala had said.

The SAHRC has set up office at the aha Gateway Hotel in Umhlanga to investigate the violence, with commissioners Andre Gaum, Chris Nissen and Philile Ntuli hearing testimony from witnesses that include alleged victims of the violence, police and ministers, and the CEOs of two of the biggest business chambers in the province.

As for the unrest being “planned”, Zikalala told Gaum while being questioned that he agreed with national police commissioner Khehla Sitole — who testified earlier in the week — that it was.

“Yes, I think it was planned, orchestrated with the mobilisation around Nkandla to say the former president must not be arrested, but it escalated, so I would say it was planned.”

Asked Gaum: “What are the indicators for you that indicate it was planned?”

“Well firstly, in as far as the incarceration of the former president, there were people [at Nkandla] guarding trying to ensure that they formed what they called protection for him. I would say the social media, the way it was used, it showed there were people that just issued messages around.”

“And the escalation?” asked Gaum.

Zikalala said that he and economic development MEC Ravi Pillay had viewed media from a private security company that showed how one person, for example, had broken into a business or store, and only after entrance was successfully gained, did other looters pour into the premises.

Gaum asked about the alleged 12 instigators of the violence, and said that after police had announced they knew the names of the instigators, “not much else has been heard”.

“Do you know by now who…” Gaum started asking, but Zikalala interrupted him, saying “No, I don’t know, and the minister [of police] has not given me anything.”

Some of those alleged instigators — whose names are in the public domain — have been arrested or handed themselves over to police. Only one has been denied bail — Ndumiseni Khetha Zuma — who faces charges of contravening the riotous assemblies act relating to the torching of the Brookside Mall in Pietermaritzburg.  Zuma is one of three alleged instigators from KwaZulu-Natal that used social media platforms and messaging to incite looters.

The eight days of disgrace also affected parts of Gauteng province, but KwaZulu-Natal was by far the hardest hit as thousands of looters — many armed and drunk — invaded malls, bottle stores, businesses and industrial business parks.

Zikalala told the commission that he did not have an exact number of the people who died during the unrest, but could find out and make it available to the commission. Police minister Bheki Cele, however, during an appearance at the NCOP shortly after the violence, had placed the number of deaths — the vast majority in KZN — at 359.

Zikalala had said via a statement just prior to the looting that the deaths were in the main the result of looters being crushed while scrambling for goods, or attacking each other in fights over stolen goods.

KwaZulu-Natal suffered a loss of R20-billion (at conservative estimates) as a result of the destruction.

Gauteng premier David Makhura is expected to testify later in the day, followed by defence minister Thandi Modise. Both will be sharing information via virtual platforms. DM