LETTER TO THE ANC 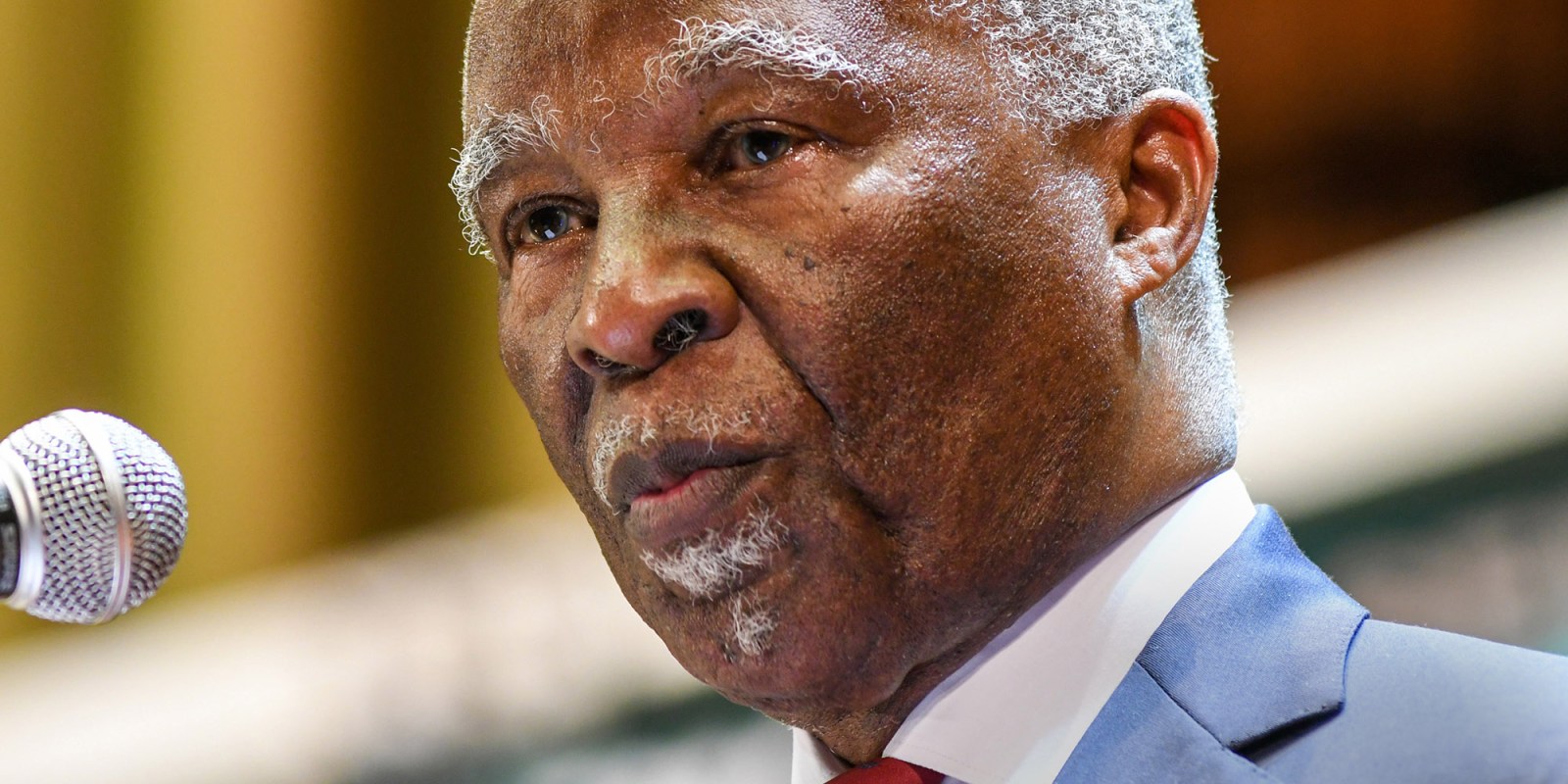 Thabo Mbeki recommends some introspection, and his quotes from party documents seem to suggest that nothing from the era of former president Jacob Zuma holds sway anymore.

Mbeki penned an unsolicited eight-page letter to ANC Deputy Secretary-General Jessie Duarte, which emerged one day after the date on it, 24 November 2021, in which he warned that the outcome of the 1 November local government elections “represents a serious reversal for the progressive movement and a significant advance for the right-wing forces”.

He continued: “I would like to believe that all of us in the ANC have fully taken on board the hard and incontestable truth that we carry much of the blame for this outcome.”

His analysis of a serious reversal wasn’t quite shared by the party’s head of organising, Nomvula Mokonyane, who at a press conference on Thursday night said the election results, compared with 2016, don’t show a decline but rather that “in actual fact the ANC has not grown, we remain at the same level that we were in the past elections”.

But she did admit that the serious contestation and infighting for positions had something to do with the party not growing, while the party’s head of elections, Fikile Mbalula, laid much of the blame too on the problems the campaign encountered with perceptions. Some of this was due to the way the media highlighted certain problems, he said.

“People would sit in an RDP house and say, ‘We don’t vote for the ANC because they are stealing,’” he said.

Part of the reason parties campaign before elections is to sway perceptions, but best not tell the ANC’s head of elections that. He was already complaining that the Constitutional Court gave parties only 42 days to campaign when it ruled on elections during a pandemic, while the ANC needed three months.

What he neglected to say was that all parties were in the same boat, and despite the upheavals created by the Covid-19 lockdown, some, like the IFP, the EFF and the FF Plus still managed to grow their share of the vote.

New kid on the block ActionSA, which has existed for a longer time under lockdown than it has outside, even managed to get enough seats in some of the metros it contested to become key players in the coalition talks.

Mbeki in his letter recommends some introspection, and his quotes from party documents seem to suggest that nothing from the era of former president Jacob Zuma holds sway anymore. It could also be that he one day accidentally recycled everything written from 2007 to just before the 2017 Nasrec conference.

“It is obvious that if nothing changes with regard to the conditions and factors which helped to produce this outcome, and certainly if matters get worse, this will certainly lead to a strategic defeat of the progressive movement and a historic victory for the right-wing,” he wrote.

It is not clear whether by right-wing he means the DA and the FF Plus or the populism of the EFF, or perhaps both, but further down in the letter he refers to the “alert” sounded in the 1997 version of the party’s Strategy and Tactics document, which talks about “counter-revolution”.

He quotes from the document as follows: “The networks used by the regime, especially in its ‘dirty war’ both within and outside South Africa remained intact, either burrowed within the state machinery, or concealed in front companies and other private enterprises.”

The objective of “these counter-revolutionary forces is to disorganise, weaken and destroy the ANC, the vanguard of the NDR [National Democratic Revolution], both from within and from outside its ranks.

“Uppermost in the immediate objectives of these counter-revolutionary forces is to disorganise, weaken and destroy the ANC, the vanguard of the NDR, both from within and from outside its ranks. It is in the interest of these elements that the masses of the people should be left leaderless and rudderless, and thus open to manipulation against their own interests.”

This is perhaps one way of interpreting EFF leader Julius Malema’s words at the party’s press conference on Thursday: “We are here to bury the ANC.”

The EFF and ActionSA resolved to vote in support of DA mayors in a number of metros with the sole aim of ousting the ANC, which saw its support drop to under 50% in most of the biggest metros.

Mbeki, who during the ANC’s elections campaign said the party was “too big to fail”, identified “Four (4) Urgent Tasks” in his letter, namely:

The renewal of the ANC includes making good on where the ANC has lost touch or where there is factionalism and corruption.

On this, Mbeki quotes the Communist Party of China saying: “The quality of its members is the core element for the Party’s long-term development. If those who neither perform the member’s duties nor qualify [for] the member criteria are not timely eliminated from the Party, the overall impression of the people about the Party will be damaged.”

Mokonyane, in the briefing, touched on a similar aspect when she said the party would not only look at rebuilding itself, “but will also look at the character of the members of the ANC” and at cadre development.

Mbeki wrote that the party’s Veterans’ League had offered to help the National Executive Committee with the task of renewal. “It is perhaps time to take up this offer if it is still in place,” he wrote.

With regards to his admonitions on election promises, there was perhaps one small irony from the man who, as president, at times appeared to have been in denial about the growing crime problem in the country.

He said: “One of our commitments in all our manifestos is seriously to fight crime and therefore radically improve the safety and security of all our citizens. This must be done!”

Mbeki also urged that the ANC “constitute the necessary municipal governments as quickly as possible” to focus on its historic mission of bringing about transformation in society.

“The ANC has never existed for itself or simply to perpetuate its own existence,” he wrote. “This means that during the democratic era it cannot be that it exists merely to access power and remain in power.”

Mbalula, however, has only one focus. Referring to the upcoming general elections, he said: “2024 we must win.” He promised that the party would look at challenges without playing a blame game.

It would do a “thorough review” on the polls based on an elections report that was submitted to the NEC. There were many external factors that contributed to the ANC’s poor performance, such as the fact that the elections were on a Monday and not a Wednesday as usual, but, ultimately, Mbalula said “we must blame ourselves”. DM