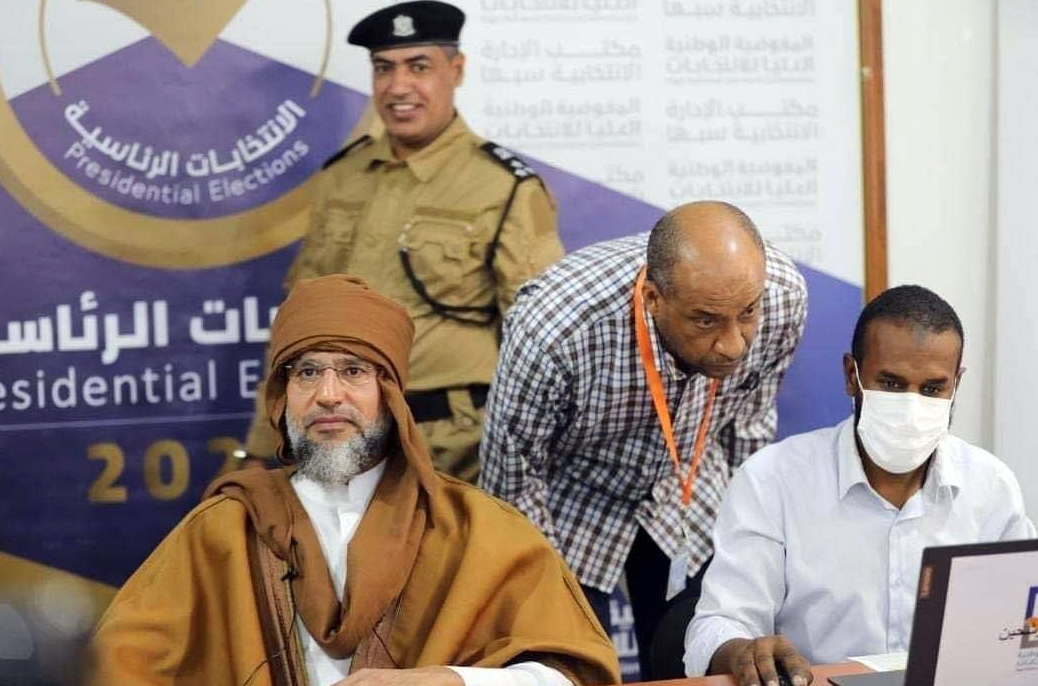 Saif al-Islam Gaddafi’s ambitions in Libya may not materialise, but his move shows the international court’s limits.

It’s almost 10 years to the day since the streets of Tripoli rang out to a rally of celebratory gunfire by Zintani militiamen. After several false sightings, Saif al-Islam Gaddafi, the fugitive son of late ruler Muammar Gaddafi, had been captured in the south of Libya.

Now, after six years of being held by tribal militias and in defiance of an International Criminal Court (ICC) arrest warrant, he has declared his intention to run for president. Libya’s election commission may derail his move with a ban on Gaddafi and 24 other candidates from standing. This could however be overturned on appeal.

The man once considered a reformer was indicted by the ICC for crimes against humanity — particularly his alleged role in the brutal crackdown by Libyan state security on protesters ahead of the 2011 uprising.

Gaddafi is also not the only man eyeing the presidency despite charges hanging over him. Warlord and former head of the Libyan national army, General Khalifa Haftar, faces both civil and criminal charges. These include committing or presiding over acts of torture during the 2016 Benghazi siege. Like Gaddafi, who was sentenced to death in absentia, he’s also wanted by Libya’s domestic courts, which Libya analysts say is far more likely to influence voters than the ICC indictments.

Many commentators consider Gaddafi’s (for now) thwarted bid for the presidency to be symbolic and even a sinister reminder of the violent legacy associated with the Gaddafi dynasty. But what does it say about the state of international justice?

The audacious move by the younger Gaddafi is a reminder of Uhuru Kenyatta’s case at the ICC. He bid for the Kenyan presidency in 2013 while charged by the international court with five counts of crimes against humanity, following the post-election violence that ripped Kenya apart in 2007/8. The charges were subsequently withdrawn in 2015.

But unlike Gaddafi, Kenyatta wasn’t the subject of an arrest warrant and ‘cooperated’ with the ICC just enough to avoid censure. And while Kenya is a signatory to the Rome Statute and must work with the court, Libya hasn’t signed up — and has barely hidden its disdain for the ICC.

The country was one of only two ‘situations’ the United Nations Security Council (UNSC) referred to the ICC under UNSC Resolution 1970 in 2011. The other was Darfur in Sudan. At the time, Libya’s allies said the UNSC was encroaching on the country’s sovereignty. Still, the resolution passed — driven by the responsibility to protect principle and fears of a humanitarian crisis. The assumption that the ICC could deter future atrocities or influence Libya’s conflict hasn’t come to pass.

In one of her final acts as chief prosecutor of the ICC, Fatou Bensouda warned the UNSC that “the failure to execute arrest warrants” was “blocking efforts to ensure justice for the victims of serious crimes perpetrated during a decade of conflict and strife.” She said her office continued to receive reports of “disappearances in Libya and arbitrary detention, murder, torture and sexual and gender-based violence.”

The fact that in 10 years “not a single person in Libya has been prosecuted by the ICC is scary,” says author and international justice scholar Dr Mark Kersten, a Senior Consultant at the Wayamo Foundation. While he concedes the ICC has no relevance for most people in Libya, he sees an opportunity for the court to pivot.

In his view, charges issued by the ICC shouldn’t “raise expectations of immediate action.” Instead, Kersten says these should be seen as “placeholders for potential justice … but justice that requires a constellation of actors to come together.” Put simply, the ICC needs to matter domestically for it to have influence.

The pledge by political rivals of Sudan’s Omar al-Bashir that the former leader will be handed over to the ICC is perhaps an example of this. Whether political opportunism or realpolitik, it underscores Kersten’s point.

The relationship between the ICC and the domestic context mattered in Kenya. In 2013, opposition to the ICC became an election campaign issue for Kenyatta, as he sought to galvanise support against a “neocolonial court”. An active civil society and truth commission helped keep the alleged crimes the ICC was pursuing in the public domain. That pressure — despite the eventual collapse of the Kenyan cases — arguably led to numerous domestic cases through Kenya’s civil courts.

In Libya the situation is different, argues Kersten. “Once the civil war ended, so did the pressure to pursue atrocity crimes. Civil society just does not have the same voice inside Libya and the pressure for accountability had largely come from outside.”

The Libyan and Kenyan experiences offer a lesson to the ICC — to better frame the court’s function as a driver of deterrence. The ICC’s primary role is to provide justice and accountability, even if it results in domestic courts pursuing cases, such as with Gaddafi’s former spy chief Abdullah al-Senussi.

Despite al-Senussi being indicted by the ICC, he was tried by a Libyan court. Both he and Gaddafi were sentenced to death. Al-Senussi is still in jail following a trial that drew criticism that due process wasn’t followed.

The ICC may have to exercise some strategic patience and fine-tune its messaging. Its prosecutors know that the court doesn’t exist in a political vacuum. Only if it suits domestic agendas, as seen in Sudan, will the ICC recover some strength, symbolically rise from the ashes and find favour among those committed to international justice. DM