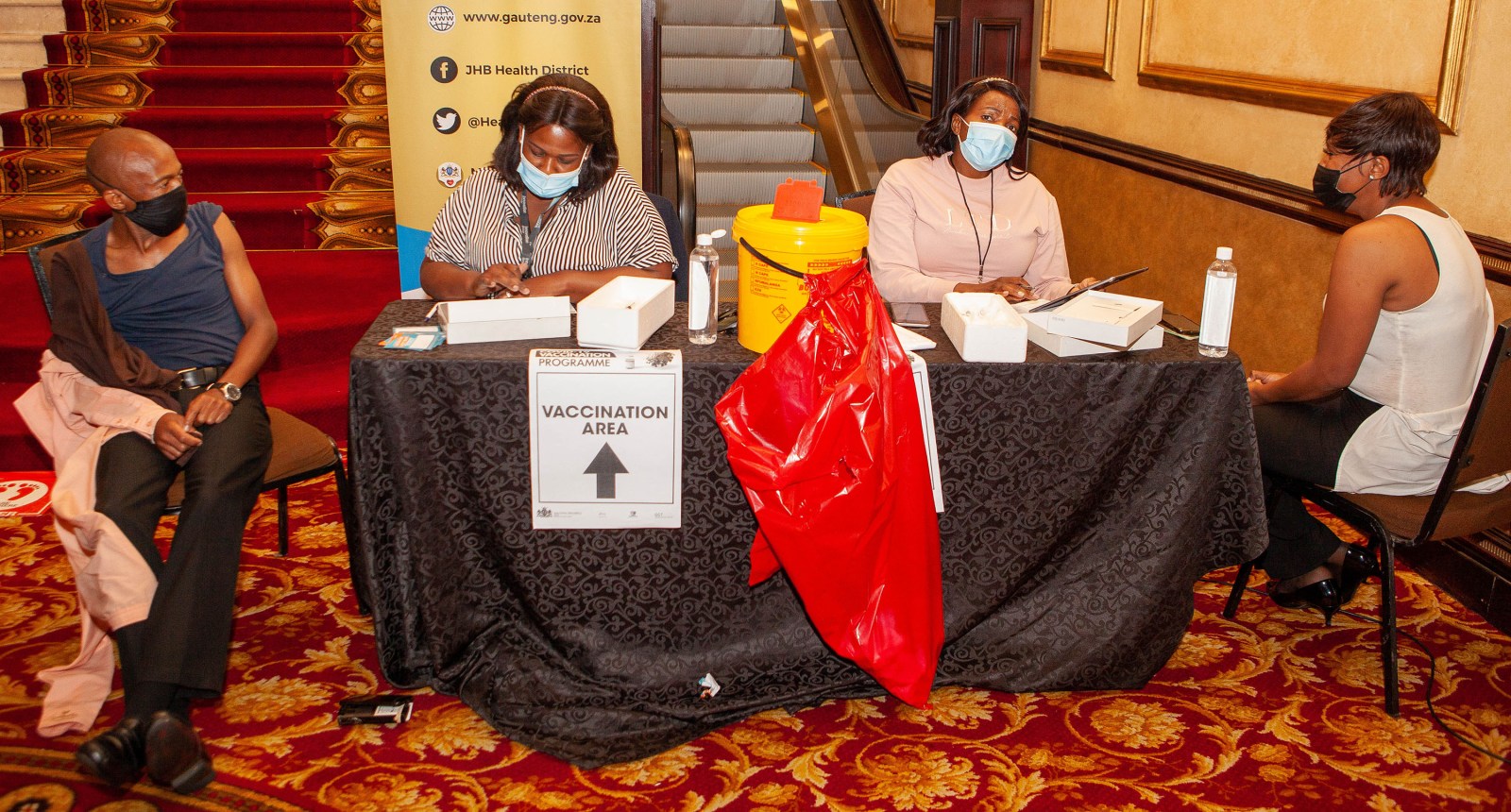 The European Union’s drug regulator has recommended the Pfizer-BioNTech vaccine for children aged five to 11. Separately, the EU plans to limit vaccine validity for travel purposes to nine months, signalling the need for boosters. Germany passed 100,000 Covid deaths, with new infections still rising and hospitals in some cities becoming overwhelmed.

Governments around Europe, the pandemic’s epicentre again, are considering reintroducing measures to curb the resurgence of the virus, including compulsory shots in Germany, restrictions for unvaccinated people in Italy, and mask mandates in Denmark. Portugal will require remote working after the holidays.

Scientists in South Africa are studying a recently identified new coronavirus variant of concern, stoking fears the country may face a potentially severe fourth wave that could spread internationally. 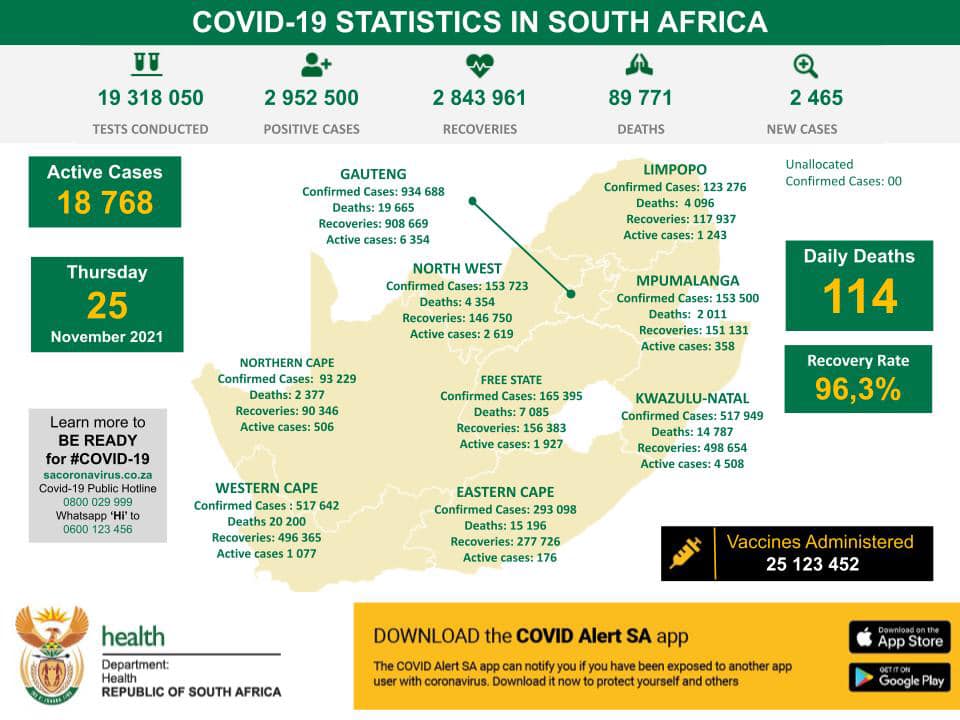 France will strengthen rules for incoming travellers who aren’t vaccinated or are coming from countries with high rates of Covid-19 or virus variants, Health Minister Olivier Veran said on Thursday in a TF1 television interview.

The government earlier announced booster shots would be made more widely available and masks mandatory. Veran also said health passes and testing would be required at ski resorts in a bid to keep them open this season after lifts were shut for part of last season.

France has reported a surge in new daily cases in recent weeks, reaching 33,464 on Thursday.

The Portuguese government said remote working will be mandatory in the week of January 2-9 as it tries to prevent a spike in coronavirus infections after the Christmas and New Year holiday break.

Schools will reopen on January 10, a week later than previously planned, Prime Minister Antonio Costa said on Thursday at a press conference in Lisbon. Until that first week of January, remote working will be recommended when possible.

From December, the use of masks will become mandatory in closed spaces, digital certificates will be needed to access restaurants and negative tests will be required for nightclubs and bars. Masks are currently already required on public transport.

Scientists in South Africa are studying a recently identified new coronavirus variant of concern, stoking fears the country may face a potentially severe fourth wave that could spread internationally.

The new discovery, called B.1.1529 until a Greek letter is assigned, carries an unusually large number of mutations and is “clearly very different” from previous incarnations, Tulio de Oliveira, a bioinformatics professor who runs gene-sequencing institutions at two South African universities, said at a briefing on Thursday.

“Here is a mutation variant of serious concern,” Health Minister Joe Phaahla said at the same media event. Virologists have detected almost 100 cases linked to the variant in the country to date.

The outgoing Czech government tightened social-distancing measures to stem a record spike in Covid-19 infections but refrained from declaring a hard lockdown imposed in neighbouring Austria and Slovakia.

The Cabinet ordered restaurants, clubs and bars to close at 10pm and imposed limits for attendance at public events, Health Minister Adam Vojtech said on Thursday. As some hospitals are already overrun with patients, Vojtech expects new coronavirus cases to continue rising and sees the current wave culminating at around Christmas.

The Moderna and Russian Sputnik V Covid-19 vaccines both edged the version from Pfizer and BioNTech in effectiveness in a large-scale study of five different immunisation shots conducted by Hungarian researchers.

Moderna’s vaccine was 88.7% effective in protecting against coronavirus infection and 93.6% effective against Covid-related mortality, compared with 85.7% and 95.4%, respectively for Sputnik, according to the paper published on Wednesday on the website of the Clinical Microbiology and Infection medical journal. Pfizer came in third with 83.3% and 90.6%, respectively.

Singapore reported the lowest number of cases found in the community since September 25, according to the Ministry of Health. The city-state detected a total of 1,275 new infections as of noon on Thursday, down from 2,079 on the previous day.

An outbreak at a Vermont nursing home has infected 70 people and left two dead, the Bennington Banner reported. More than 186,000 residents and staff at US long-term care facilities have died since the start of the pandemic, according to AARP, though vaccines have considerably slowed the spread among the elderly.

Belgium’s federal and regional governments will meet on Friday for an evaluation of virus restrictions enacted less than a week ago, Prime Minister Alexander De Croo told lawmakers in Parliament in Brussels on Thursday.

Health Minister Frank Vandenbroucke said in Parliament he will plead for immediate measures in schools, in people’s private life and in industries, without elaborating.

Denmark opens boosters to all adults

Denmark has expanded its official guidelines to include re-vaccination of all adults, the Danish Health Authority said on Thursday. Every Dane over the age of 18 will now be invited to get a booster shot, six months after receiving the second shot. The invitation had until now only been given to people above the age of 65, health staff, people with chronic diseases and those who initially were vaccinated with the Johnson & Johnson shot.

Finland’s government is preparing to stop alcohol sales after 5pm in bars and restaurants, telling them to close at 6pm, unless the establishments require patrons to provide a Covid certificate. Cafes and fast-food restaurants could operate without requiring the corona passport.

Vaccine in pregnancy showed no effect on babies

The rate of stillbirth or low birthweight in babies born to the more than 24,000 vaccinated mothers who delivered between January and August was the same as those in unvaccinated women, according to data released by the UK Health Security Agency on Thursday. The number of premature births was also similar.

Babies born to women vaccinated against Covid-19 in England showed no difference in birth outcomes, bolstering the safety profile of the shots during pregnancy.

The EU’s drug regulator approved use of the Pfizer-BioNTech vaccine for children aged five to 11, saying the benefits outweigh the risks. The two-shot regimen for younger kids is one-third the dose that’s given to those 12 and older.

The current wave of the pandemic in Europe has increasingly affected children, either because they’re directly infected or because of school and day-care classes sent into quarantine. Though Covid doesn’t usually hit children as hard as it does adults, it can spread via children to more vulnerable people.

It will probably take a few weeks to ship the lower-dose shots for children, Germany’s health minister said earlier this week, before the agency’s recommendation.

France recommends boosters for all adults

France is rolling out booster shots to all adults as it seeks to tackle the epidemic wave, Health Minister Olivier Veran told a news conference in Paris on Thursday.

The length of time between primary vaccination and a booster shot will be shortened to five months from six, in line with recommendations from the country’s health authority.

Daily coronavirus cases are surging in France, rising above 30,000 for the past two days. “This fifth wave will be unquestionably stronger and longer than the fourth wave,” Veran said, but no new lockdowns or curfews are planned.

China’s financial hub Shanghai reported three local Covid-19 infections. Three residential blocks have been classified as medium-risk areas, just after the country had managed to quell the widest outbreak of the virus since it emerged two years ago.

The latest flare-up, the first in Shanghai in about three months, may raise questions about whether China’s Covid Zero approach will be sustainable in the long run.

People vaccinated with the Pfizer-BioNTech shot start losing immunity about three months after their second dose, according to a study conducted in Israel and published Thursday in the British Medical Journal. The findings confirm the waning of protection, which is why many countries now advise boosters.

The European Union will recommend a nine-month time limit for the validity of Covid-19 vaccinations for travel into the bloc and also propose prioritising vaccinated travellers.

Member states should continue welcoming all travellers inoculated with shots approved by the bloc, according to a document seen by Bloomberg. It also calls for countries to reopen as of January 10 to all those who have used vaccines approved by the World Health Organization.

The proposed updates suggest that boosters will be needed beyond the nine-month period.

Germany passed the threshold of 100,000 Covid-19 deaths, with the latest wave of the pandemic still pushing new infections higher and hospitals in some hotspots under severe pressure.

Since the pandemic took hold at the beginning of last year, 100,119 people have died from the virus, according to the latest data from the RKI public-health institute. RKI also reported a record 75,961 new Covid-19 cases.

Germany’s death toll is still lower than in the UK, France or Italy, which each passed 100,000 some time ago. The US has recorded the most fatalities with more than 770,000, followed by Brazil with over 610,000, according to the Bloomberg Covid-19 Tracker.

Earlier, Olaf Scholz, who will succeed Angela Merkel as chancellor, said his coalition government would consider vaccine mandates for people who work with vulnerable groups. DM