(Bloomberg) --Airline shares tumbled the most since the early days of the Covid-19 pandemic, after European countries banned flights from South Africa to slow the spread of an emerging virus strain.

The U.K. will halt flights from South Africa and several neighboring countries for two days, and require a 10-day hotel quarantine for those who arrive starting Sunday. Germany said Friday it will only allow airlines to transport German residents back into the country, while European Commission President Ursula von der Leyen proposed an “emergency brake” on air travel from South Africa.

The Bloomberg EMEA Airlines Index sank as much as 12%, the biggest decline since March 2020. British Airways parent IAG SA was down 11% as of 9:08 a.m. in London, while while Deutsche Lufthansa AG Ryanair Holdings Plc and Air France-KLM registered drops of similar magnitude.

The border clampdowns mark a further blow to an airline industry whose recovery has been stalled this month by a fourth wave of coronavirus cases that triggered fresh lockdowns in Europe. Restrictions in Austria and elsewhere have cast a pall over popular ski getaways, while dampening enthusiasm for year-end holiday travel, according to Ryanair Chief Executive Officer Michael O’Leary.

“This is the worst early Christmas present that the airline industry could think of,” said Nick Cunningham, an analyst at Agency Partners in London. “To quote Yogi Berra, this is déjà vu all over again.”

Airlines, one of the industries hardest hit by the Covid-19 pandemic, have been slowly building back capacity since June, with a focus on shorter regional flights as countries started to lift border restrictions.

Long-distance travel also got a boost when the U.S. reopened its borders to European visitors and others this month, but that progress was already starting to wane. 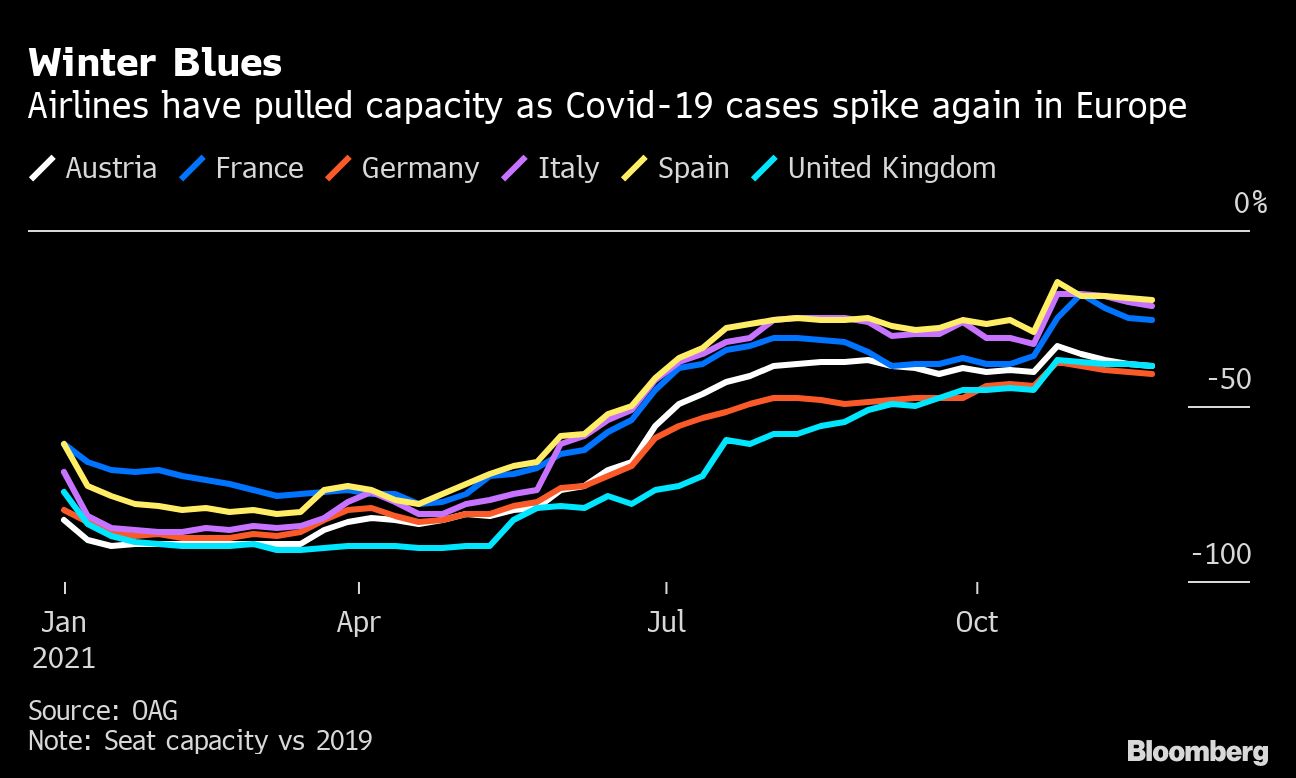 Carriers had also started to bring back flights to countries like South Africa, a popular winter sun destination. British Airways was set to restart daily services to Johannesburg by mid-December, while ramping up flights to Cape Town.

“We’re working through plans for our customers and colleagues currently in South Africa and those due to travel from the U.K. in the coming days,” British Airways said in an emailed statement.

Neighboring Botswana, Eswatini, Lesotho, Namibia and Zimbabwe were also placed on to the so-called red list, with a two-day flight ban starting midday Friday. After Sunday, arriving travelers are subject to an expensive 10-day hotel quarantine.

The measures mark the biggest change in the U.K.’s Covid travel rules since the so-called traffic light system was overhauled earlier in the autumn to ease border crossings.

Virgin Atlantic Airways Ltd. had a London-bound flight from Johannesburg in the air when the news of the red-list came through Thursday night, a spokeswoman said. Officials instructed people coming off the overnight flight to self isolate, a spokeswoman said.

A planned relaunch of Virgin Atlantic flights to Cape Town on Dec. 17 is likely to be put on hold, the spokeswoman said. Services to Johannesburg went daily on Nov. 8 and links are likely to be maintained to allow Britons to fly home, albeit under strict quarantine conditions on their arrival.

Between 500 and 700 people daily arrive in the U.K. via South Africa on flights, a number that would normally be expected to increase in the next four to six weeks due to seasonal travel.

The real test for airlines will come after generally slow winter months, according to Davy analyst Stephen Furlong.

“Airlines, in the main, have excess liquidity and will wade out the winter period,” he said. “Key will be booking profile in early 2022 for the summer 2022 season, really Easter onwards.”

–With assistance from William Wilkes.