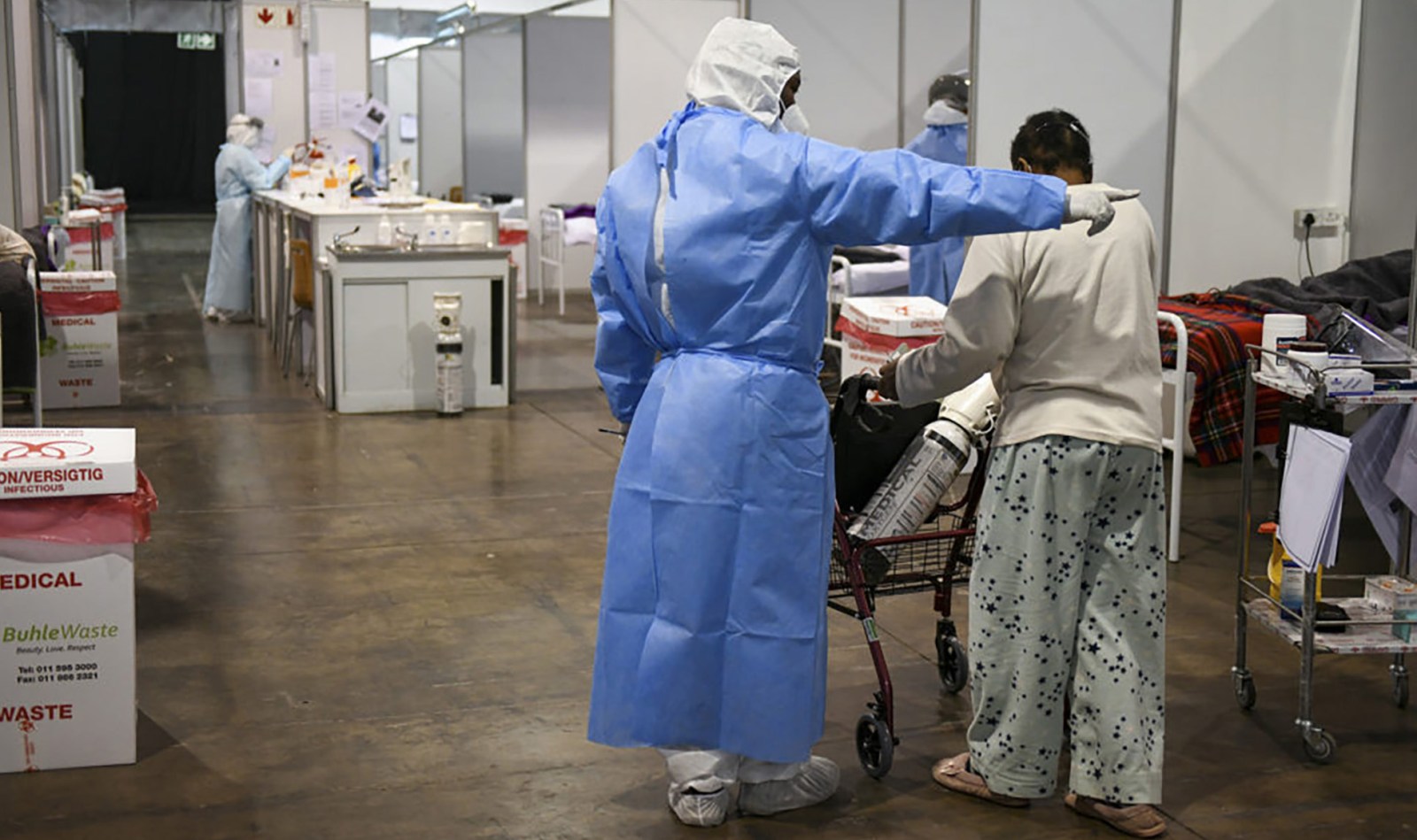 Clinical associate Oupa Mofokeng helps a patient with a mobile oxygen unit to the bathroom at the Covid-19 Nasrec Field Hospital in Johannesburg. (Photo: Chris Collingridge)

From wastewater surveillance and analysis, all the signs are clear that South Africa is heading for a fourth wave of Covid-19 in December 2021 with Gauteng in the lead, although the scale and extent cannot be predicted.

The WRC reported a sudden surge and exponential increase in SARS-CoV-2 RNA fragments detection at one of its sentinel wastewater treatment plants serving a large area of the eThekwini Municipality. This input by the Durban University of Technology was an early warning at least four weeks in advance of the rise of confirmed clinical cases. This was the beginning of the third wave. In retrospect, a rapid response with robust interventions would have lowered the intensity of the third wave.

The WRC, in partnership with the South African Local Government Association (SALGA), launched a special programme on surveillance of Covid-19 in wastewater, sanitation and health. The commission continues to fund the initiative which is coordinated by the National Institute for Communicable Diseases (NICD) with the partnership with several other partners. The main aim of this programme is to share knowledge, stimulate research and innovation on water quality, sanitation and health in support of the government’s initiatives aimed at curbing the spread of SARS-CoV-2.

The programme consists of planned, interrelated activities aimed at achieving the defined objectives, by producing specified outputs. The aims and objectives of the programme are being achieved through the following initiatives:

* Pilot and full-scale implementation of wastewater surveillance as a non-invasive approach for monitoring the spread of SARS-CoV-2 in communities;

* Research work and capacity building on SARS-CoV-2 in relation to water, sanitation and health; and

* Knowledge dissemination through webinars and workshops.

The South African science community continues its work under the umbrella of the SACCESS network. The concept of screening municipal wastewater and environmental water quality as an epidemiological tool for viruses is not a new concept and is used to help inform broader infectious disease control efforts such as the Global Polio Eradication Initiative. Environmental surveillance is also used and recommended for other infections, such as typhoid, early warning of hepatitis A and norovirus outbreaks, as well as for antimicrobial resistance, with modelling techniques used to assist both the design and interpretation of those efforts.

Wastewater-based surveillance deals with a remnant nucleic acid particle of the SARS-CoV-2 virus and not a live virus, hence the procedure is safe. The detection of SARS-CoV-2 in sewage does not pose a risk of disease spread, but has potential to determine the presence of infected individuals in a community. SARS-CoV-2 RNA screening in raw sewage water using Rt-PCR (reverse transcription polymerase chain reaction) can therefore be used as a tool to measure the virus circulation in a defined population, for example a city or a smaller municipality feeding to the same wastewater treatment works.

The WRC-supported initiative has continued sampling many of the sentinel strategic wastewater plants since the beginning of this programme. As resources become available, we are adding more plants to the surveillance network, and this is beginning to complement the many other initiatives by the government and municipalities.

This WBE programme is passionately driven and coordinated by a team at the NICD, who produce weekly reports on the testing of wastewater samples at plants around the country, covering most of the metros and many other towns and cities. As early as week 45, the week of 15 October 2021, the NICD report started to highlight signs of increases in the SARS COV-2 RNA signals in the samples. Most of these increases were prominent in the Gauteng areas. This trend and the spikes continue to consistently increase by threefold as per the graphs of week 46 (16 November, source: NICD). The clinical reported cases during this period are not yet picked up in this trend.

The NICD reports indicated that in week 45 in most of the wastewater treatment plants in all provinces, wastewater levels of SARS-CoV-2 continue to decline or remain at constant low levels, corresponding with the low levels of clinical cases reported across South Africa.

There is, however, a need for increased clinical surveillance in the areas draining into the following Gauteng wastewater treatment plants as the SARS-CoV-2 levels in wastewater are increasing:

*  The City of Johannesburg: Two successive increases have been observed in Goudkoppies. Authorities should strengthen surveillance for clinical cases in these areas; and

* The levels in Ennerdale in the City of Johannesburg and Ekurhuleni North (Hartbeesfontein and Refilwe) may be increasing, requiring close monitoring and more samples for confirmation. 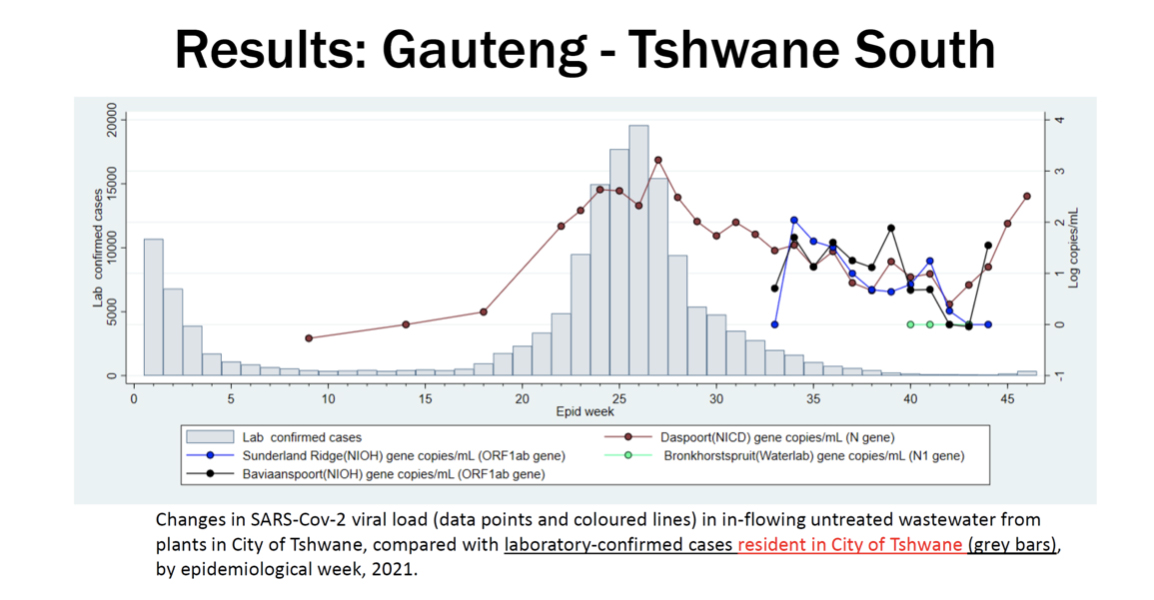 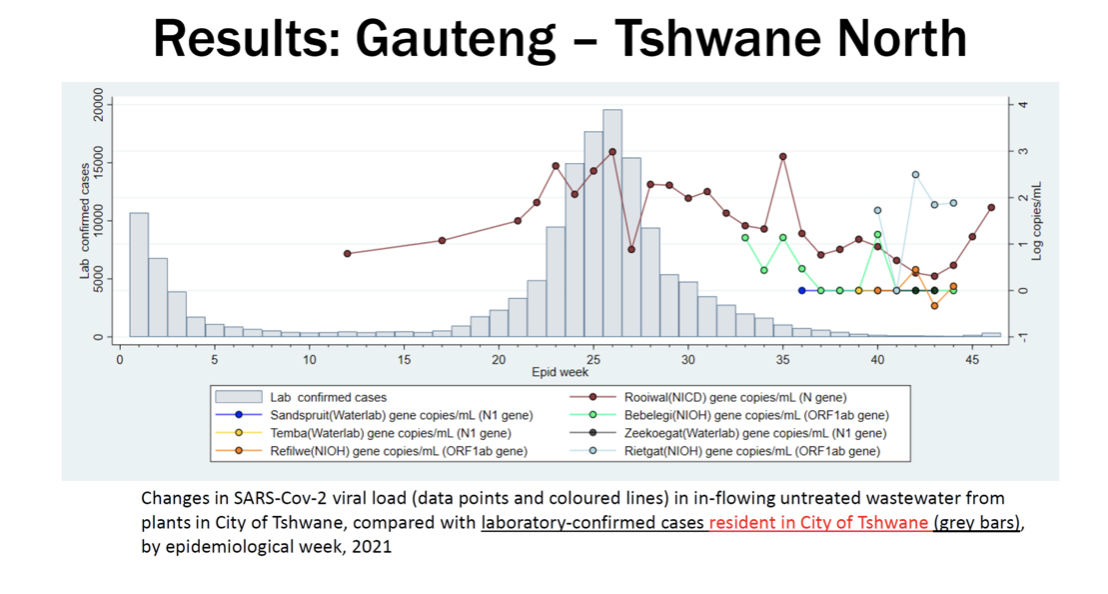 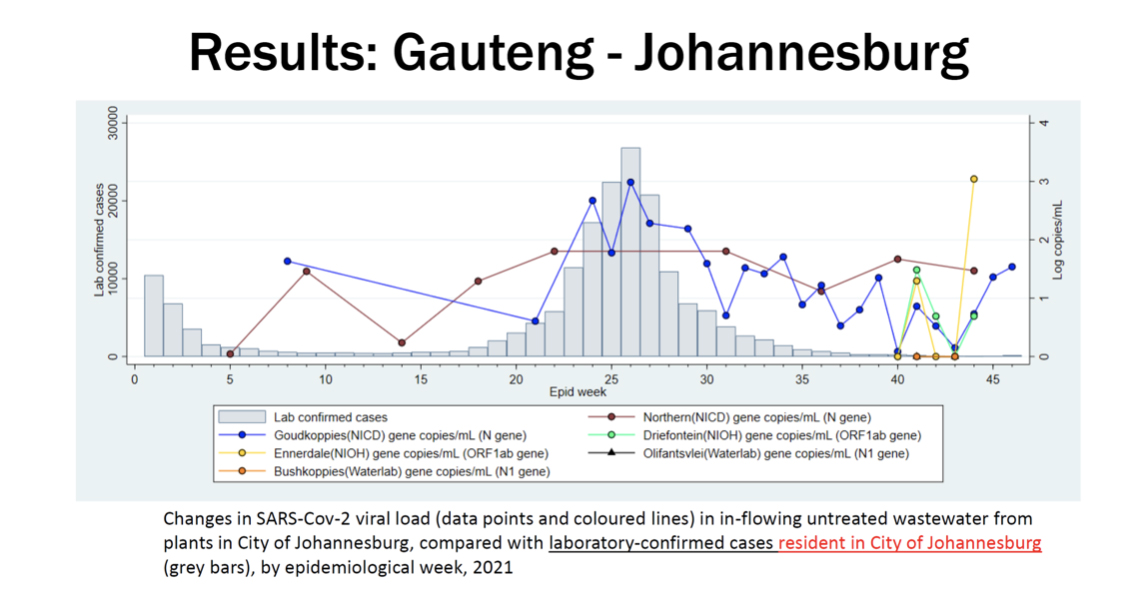 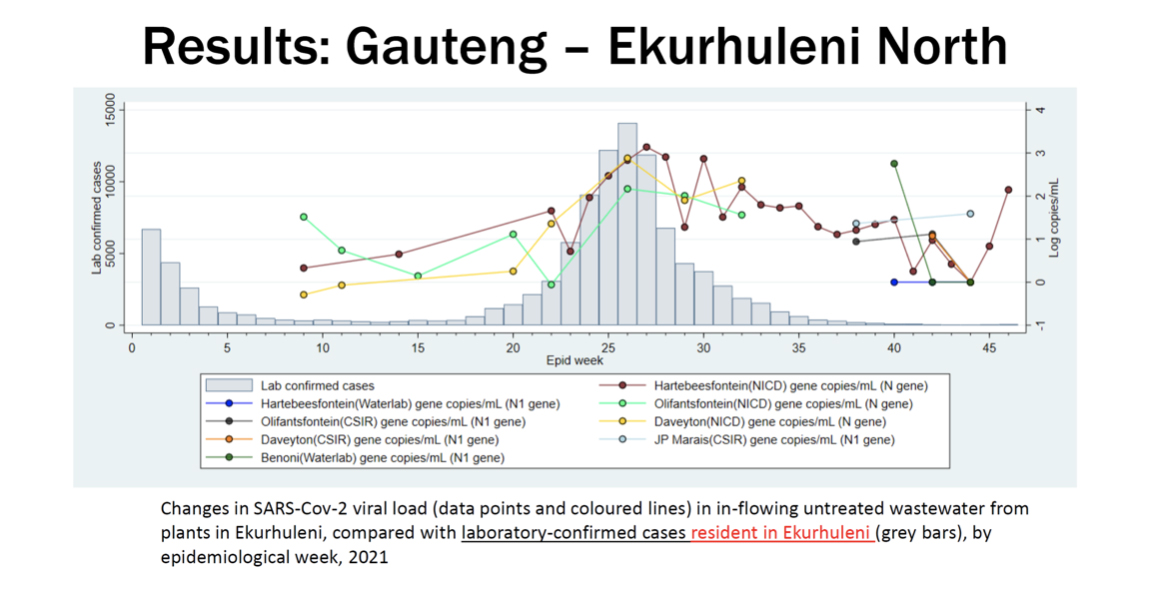 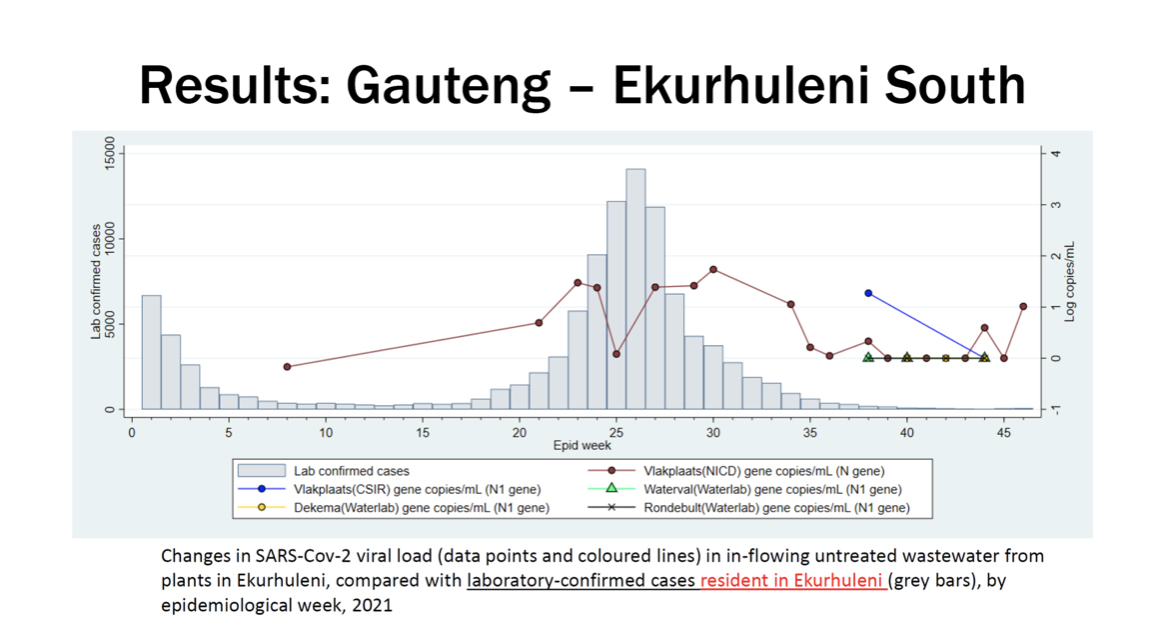 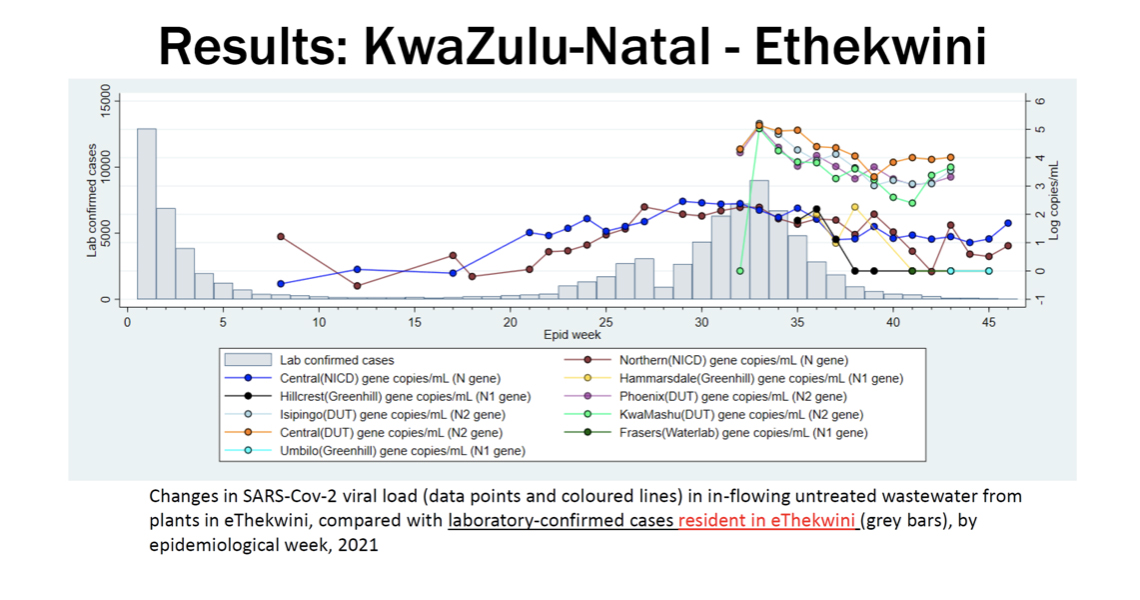 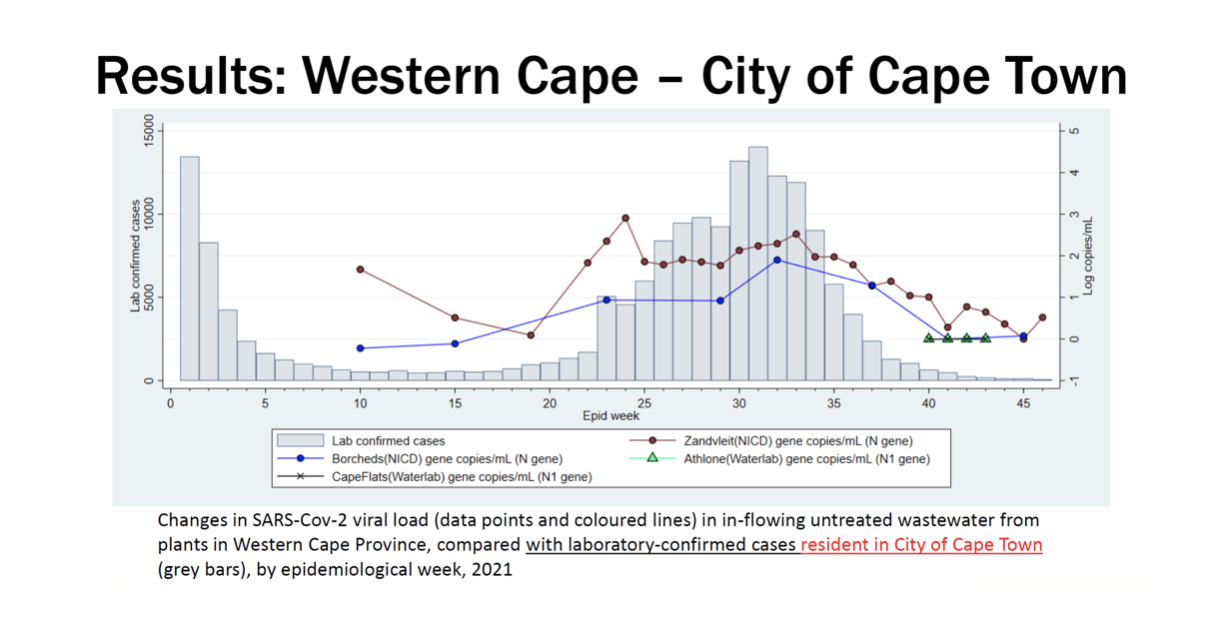 Yes, all signs are clear that we are heading for the fourth wave towards December 2021 with Gauteng in the lead. However, the scale and extent cannot be predicted. The peak can be minimised and reduced if we put into action all the necessary measures like hand washing, wearing masks, physical distancing and ensuring more people get vaccinated. Through this we can avoid similar peaks like in the previous waves. Let us, as South Africa, work together. DM

Jay Bhagwan is the Executive Manager of the Water Use, Wastewater Resources and Sanitation Futures Key Strategic Area at the WRC and led the WRC/SALGA/NICD/SACCESS National Wastewater-Based Surveillance programme of COV-2 virus. He acknowledges the work of the NICD and the SACCESS teams.