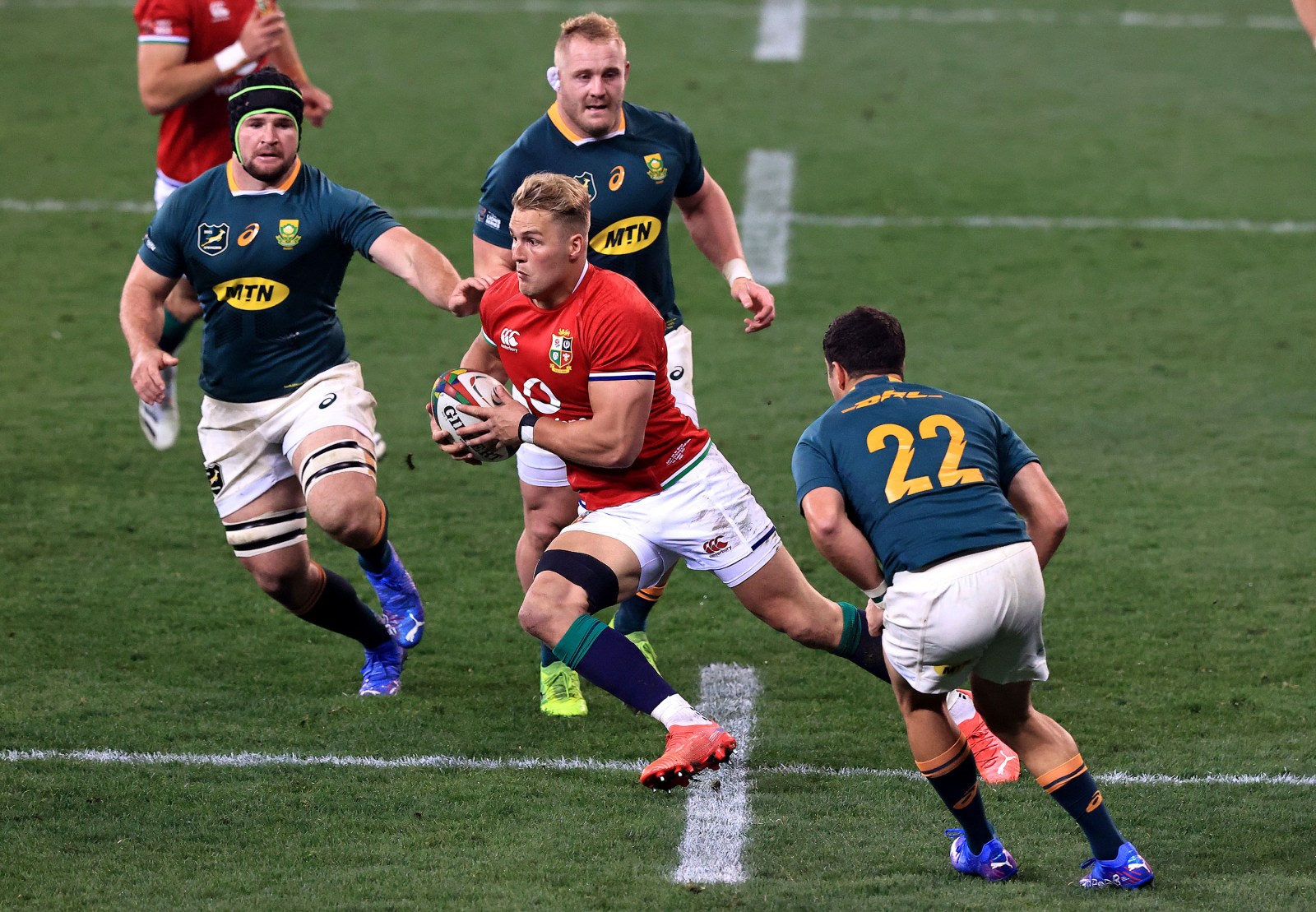 World Rugby’s amendment of Regulation 8, which guides its national eligibility rules, could have unintended consequences for the international game.

It’s unlikely, but — thanks to an eligibility rule change by World Rugby — possible that Scotland and British & Irish Lions wing Duhan van der Merwe could turn out for the Springboks in future.

South Africa born and raised Van der Merwe, who played for SA Schools and the Junior Boks, is just one of dozens of players who could benefit from the revised regulation.

Van der Merwe (26), who played in all three Tests for the Lions against the Boks this year, and was impressive for Scotland against the country of his birth just a few weeks ago, is one of many South Africans who could fulfil childhood ambitions of wearing the green and gold.

France lock Paul Willemse, Scotland prop Pierre Schoeman and Van der Merwe are just three players who could use the loophole in the future if they choose to. It’s not to say they would want to, but the option now exists after they chose to pursue their careers elsewhere when they felt their path to the Boks was blocked.

This week World Rugby amended its long-held policy that once a player was capped for one country he was ineligible to play Test rugby for another.

In fact, it even reached a stage where national unions designated a second team, such as the Junior Boks or the senior “A” side to “capture” players. Once they had turned out for those teams, they were also ineligible to play for another country.

But from 1 January 2022, in order to transfer from one union to another under the revised Regulation 8 (eligibility), a player will need to meet the below criteria:

Essentially if Van der Merwe, Willemse or any other South African capped by another country wants to have a shot at being a Springbok, he would have to give up Test rugby for three years.

While that sounds like a long time, there are many players who will qualify almost as soon as the new regulations kick in. The change has been met with much joy in the Pacific Islands of Tonga, Samoa and Fiji, where a slew of former All Blacks will be eligible for those countries when the regulation amendment becomes policy next year.

“We did it,” proclaimed the Twitter feed of Pacific Rugby Welfare (PRW), which campaigned for the change under the hashtag #LetThemPlay.

PRW chief executive Daniel Leo thanked the World Rugby Council for making the change. “World Rugby, this goes a long way to restoring many peoples’ faith in the sport and the values we hold dear,” the former Samoa lock tweeted.

“Great news for all the Pacific Nations. Can’t wait to get going with the brothers. For the people,” former All Black centre Malakai Fekitoa, who could also play for Tonga next year, posted on social media.

All Blacks Charles Piutau and Vaea Fifita will be eligible for Tonga for Rugby World Cup 2023 and Julian Savea, Victor Vito and Steven Luatua could turn out for Samoa at RWC 2023.

Other former All Blacks such as Waisake Naholo, Seta Tamanivalu, George Moala, Augustine Pulu, Ngani Laumape and Francis Saili are all going to be eligible for various Pacific Island teams within months.

“Approval of this landmark regulatory change is the culmination of detailed and widespread modelling and consultation across the game,” World Rugby chairman Bill Beaumont said.

“We have listened to our membership and players and sought to update the regulation recognising the modern professional rugby environment without compromising the integrity of the international game.

“Any player who wishes to transfer will need to have a close and credible link to their new union, namely birth right or parent or grandparent birth right while meeting strong criteria, including a 36-month stand-down period.

“We believe that this is the fairest way to implement progressive change that puts players first while also having the potential to support a growing, increasingly competitive international men’s and women’s game.”

But not all role-players view it as a positive development.

“I understand that there are special cases on an individual basis, especially some young players who were ‘captured’ by the previous system when they were 18 or 19. But philosophically I’m not sure it’s sending the right message,” Eugene Henning, head of MyPlayers, the South African rugby players’ union, told Daily Maverick.

“The change has been widely welcomed in the Pacific Islands. But I wonder if it will receive the same praise if say, Van der Merwe tries to qualify for the Springboks when Scotland have put so much into his development?”

There have been very few non-South African players to have represented the Springboks. Zimbabwean-born and schooled Tendai “Beast” Mtawarira was the highest profile, but the Sharks put tremendous effort into his early development.

It’s all about perspective though, and players with Pacific Island heritage retain strong bonds to their ancestry, even if playing professionally in New Zealand and France and for the All Blacks and Les Bleus has brought them fame and fortune.

Current All Black loose forward Ardie Savea, who skippered the team this year, has said in the past: “Heart and soul, I still love the All Blacks jersey, and what it’s provided to me and my family. But man, the heart and the soul goes back deeper. My Samoan blood goes back thousands of years.”

Samoa coach Seilala Mapusua was happy with the news and will benefit from the amended regulation. Former All Black flyhalf Lima Sopoaga, who played the last of his 16 Tests in 2017, is now eligible to switch allegiance.

“We don’t have a lot of resources in the islands, but this is one small change we can tap into,” Mapusua told New Zealand’s Stuff Media.

“It’s not going to mean that we’re going to win every Test match, but it does go a long way in terms of strengthening our team. The main thing is being competitive, and we had some quality players that have been sitting on the sidelines just watching for the last few years.”

World Rugby vice-chairman Bernard Laporte added: “We have listened to our membership and honoured our pledge to undertake a wide-ranging review of this important regulation.

“We have consulted, sought feedback from our unions, regions and most importantly to players’ representatives, before making a recommendation to the Council.

“This change to how international rugby operates will provide transformational opportunities to players with dual backgrounds, providing they meet the key criteria set out in the Regulation 8.” DM