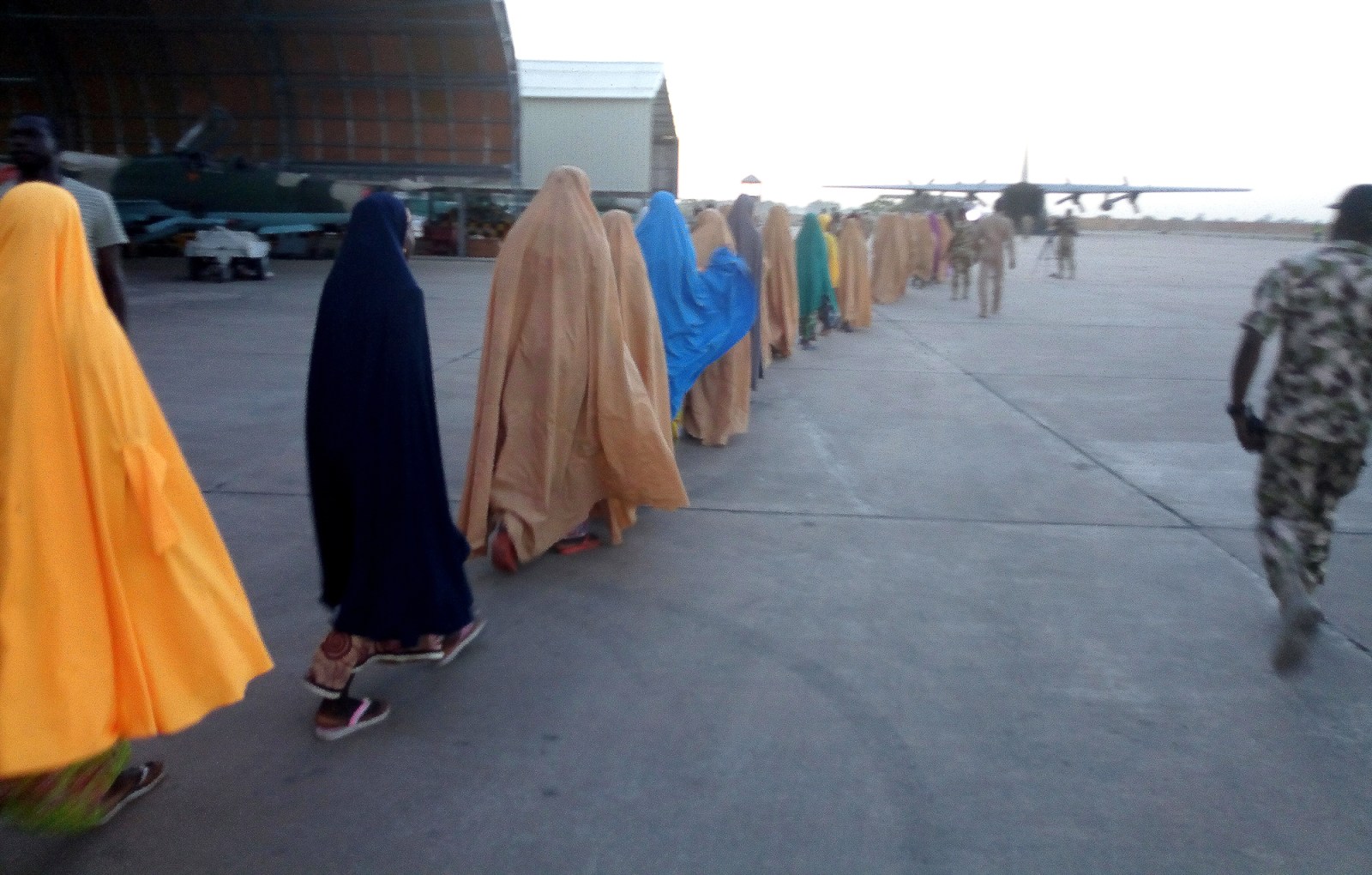 Military and government officials supervising the airlift of the rescued girls at Maiduguri Airport, Nigeria, late Wednesday 21 March 2018. Boko Haram released more than 100 of the schoolgirls it abducted in February 2018. (Photo: EPA-EFE/STR)

Focus on girls’ schooling from an early age is essential for building their resilience and financial independence.

Research has shown why women join violent extremist groups in Africa, but much less attention is given to those who leave or don’t enlist at all. What makes some women resist recruitment? And why do those who join sometimes disengage?

The Institute for Security Studies (ISS) has recently explored the circumstances that allowed women to reject or cut ties with Boko Haram in Niger’s Diffa region and Katiba Macina in Mali’s Mopti and Ségou regions. Understanding these factors is key to women’s safety. It will prevent their association with armed groups and reduce their exposure to extremist violence.

In Mali and Niger, women have mostly escaped recruitment by fleeing areas where the groups are active. Some end up in camps for internally displaced persons, while others take refuge with relatives who live far away or send their children to family members in safer parts of the country. Women interviewed in Niger took refuge there after escaping areas occupied or under attack by Boko Haram in Nigeria.

Those who didn’t flee avoided places where the groups were active, and refrained from publicly criticising them. Interviewees said terror groups often targeted people who openly opposed them. Others said they knew of the group’s activities in their area but didn’t encounter them.

Some women in Niger said their knowledge of Islam and the Qurʾān stopped them from joining Boko Haram. In Mali too, women said they weren’t convinced by Katiba Macina’s religious discourse and could deconstruct and identify inconsistencies in recruiters’ rhetoric.

This means that governments should invest in girls’ education from an early age — including religious education — and remove the many socio-cultural, religious and security barriers that obstruct their access.

Another factor preventing recruitment for some women in Mali was that they didn’t have a death to avenge. In both Mali and Niger, women have joined terror groups after witnessing or experiencing atrocities by defence and security forces in the name of counter-terrorism. They gave their allegiance to violent extremists to avenge the deaths or abuse of loved ones at the hands of those meant to protect them.

Other women decided not to enlist for fear of being arrested or killed by the soldiers fighting Boko Haram and Katiba Macina. This was especially true in Niger, where most women associated with Boko Haram live in the group’s camps. Those abducted by Boko Haram or forced to collaborate with Katiba Macina said a military presence could have prevented their enlistment. In Niger, some women saw military offensives against Boko Haram as a chance to escape.

Military responses could improve women’s safety but must be accompanied by measures that deal with the root causes of violent extremism. Such responses must also be mindful of human rights and tackle impunity by state and non-state armed actors.

Financial security is another reason women don’t join extremists. Women in Mali told ISS researchers they had an acceptable form of income and one that Katiba Macina’s activities didn’t directly threaten. Others had regular financial support from relatives in the diaspora.

In both countries, for men and women, the fear of family or community rejection and the influence of relatives and local leaders kept them from collaborating with terror groups. Some were dissuaded by their parents (especially mothers and grandmothers), who sometimes threatened to curse or disown them if they did. In Niger, women said they were influenced by the experience of their peers who had joined Boko Haram but had become disillusioned.

Others were influenced by prominent local figures (community and traditional leaders, imams, marabouts, etc) who advocated against association with violent extremist groups. Religious leaders and social networks play an important gatekeeping role by filtering and dissecting the disinformation spread by recruiters.

For those who fled the areas where Boko Haram or Katiba Macina were active, having a chance to rebuild their lives in a safe environment was vital. But interviews conducted with women in refugee or displaced persons camps revealed that poor living conditions in the camps tested their resilience, leading some to consider enlisting with the terror groups. This means that humanitarian and development approaches are vital for managing refugees who have fled violent extremists.

For those who decide to leave terror groups, reintegration programmes must meet their needs to prevent them from rejoining. Some women who left Boko Haram in Niger said dashed expectations around reintegration made them consider going back. To work, these initiatives must be gender-sensitive and actively engage the communities women will return to.

The decision to not enlist in a violent extremist group isn’t a linear process. Some women who intended to join Boko Haram backpedalled after a family member intervened. In others, women who resisted recruitment were coerced or abducted by the groups. Some women who joined Boko Haram ended up fleeing to escape forced and abusive marriages and harsh living conditions.

Long-term responses to preventing violent extremism must involve reinforcing women’s resilience to the groups involved. This, in turn, requires a sound understanding of the many and often interconnected factors that influence women’s decisions about both recruitment and resistance. DM

This article is made possible with support from the International Development Research Centre (IDRC), the UK Conflict, Stability and Security Fund (CSSF) and the Government of Denmark.