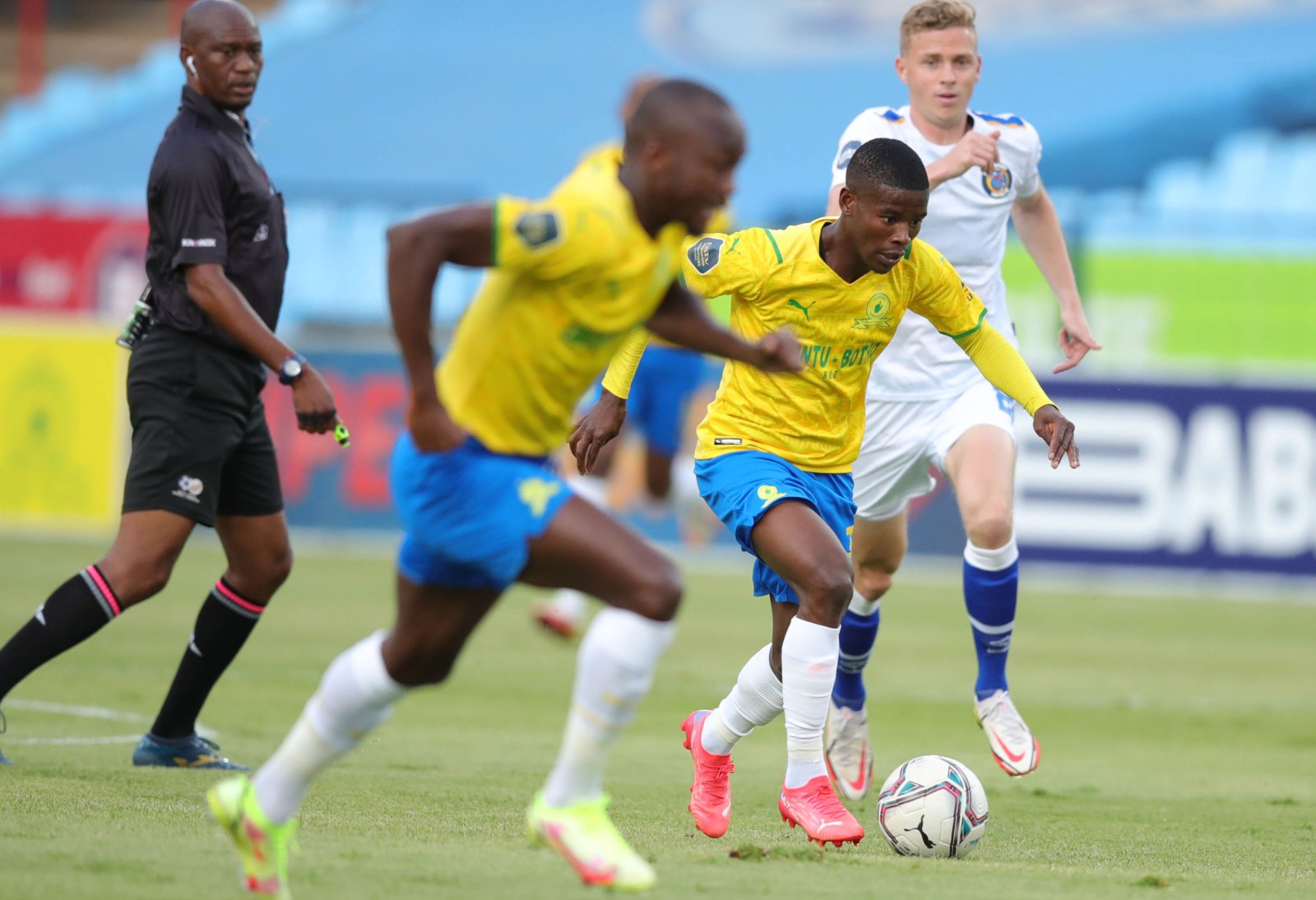 After going 10 games without conceding at the beginning of the 2021/2022 DStv Premiership season, Mamelodi Sundowns were finally broken down in a tantalising Tshwane derby.

Mamelodi Sundowns’ record run of consecutive clean sheets, which lasted 13 games, dating back to the tail-end of last season, finally came to an end during an exciting Tshwane derby.

Masandawana played out to a 2-2 draw against their neighbours SuperSport United at Loftus Versfeld on Wednesday.

The defending DStv Premiership champions would have been extremely confident coming into this game.

In 36 head-to-head matches preceding this encounter, Sundowns had won 2o to Matsatsantsa’s seven. This latest result became the tenth draw in 37 matches between the two sides.

There were early signs that there would be goals in the game as SuperSport forward Thamsanqa Gabuza rattled the crossbar within a minute of the match kicking off.

Later, the on-form Peter Shalulile smacked a powerful strike against the lip of the crossbar. It turned out to be a warning shot which Ronwen Williams failed to heed in the SuperSport goal.

With halftime on the horizon, midfielder Neo Maema curled what is likely to be one of the contenders for goal of the season past Williams to hand the home side the lead.

The Brazilians, with their solid defence in mind, looked to have wrapped up the game when Shalulile scored his ninth league goal in 11 games to make it 2-0 four minutes into the second half.

However, United mounted an impressive comeback, helped by two errors from the usually reliable and rock-solid Denis Onyango in the Sundowns goal.

The Ugandan spilled a long-range strike from midfielder Jamie Webber into the path of fleet-footed Zambian winger Ghampani Lungu, who duly stroked the ball past Onyango to hand his team a lifeline.

Matsatsantsa made good use of that lifeline as Bafana Bafana star Tebogo Mokoena scored a stunning free kick from distance to level matters 10 minutes from time.

Despite applying ample pressure in the dying moments and swinging at a Sundowns side teetering against the ropes, SuperSport could not land a knockout blow and the match ended in a stalemate.

Monkey off our back

Coming into the match, Sundowns coach Manqoba Mngqithi had said that his side’s clean-sheet record was stifling the team and preventing them from executing certain things as well as they usually can.

“That’s my concern at this stage with these clean sheets, as much as it’s exciting, but on the other side, I get a feeling that it is derailing our freedom of expression, which ultimately makes us perform better and have better results,” said the 50-year-old coach.

Following their defences finally being breached, Mngqithi’s colleague Rulani Mokwena bemoaned his side’s display, but added that they were relieved that the burden that came with the record of not conceding had now been alleviated.

“Not a very good performance throughout. A performance we can never be happy with,” said Mokwena.

“They [SuperSport] had the better chances. We are not a team that gives a lot of chances to the opposition, hence the clean sheets. But today we allowed them to create a lot of chances. We were never performing today. We played too fast and we had no control of the game.

“We move. We take a point and no crying. We’ll just soldier on; it’s still a long season. The good thing is that the monkey is off our back now. We can’t talk about not conceding any more. The pressure is off the players.”

There was also no joy for second-placed Stellenbosch as the Cape Town side was thoroughly thrashed 3-0 by Orlando Pirates at home.

A goal in each half from Namibian international Deon Hotto, with a Collins Makgaka strike sandwiched between them, saw Pirates cruise to victory after failing to do so in their past two games. It was the first time Steve Barker’s men had lost a match this season.

The Buccaneers’ arch-rivals Kaizer Chiefs could only manage a one-all draw against AmaZulu, leaving the coaches of both teams unhappy with the application of their players.

“We’ve got absolutely nothing. We don’t look like a team that will create and win the game because we’re passive. And then we concede the softest goal. Now you’re chasing the game unnecessarily,” said AmaZulu coach Benni McCarthy.

“There’s not much I can do. Because you do what you’re supposed to do on the training pitch. Then you expect that the players will show something and step up. But then you get these dismal performances.”

Elsewhere, Marumo Gallants were held to a 0-0 draw by 10-man Maritzburg United. DM