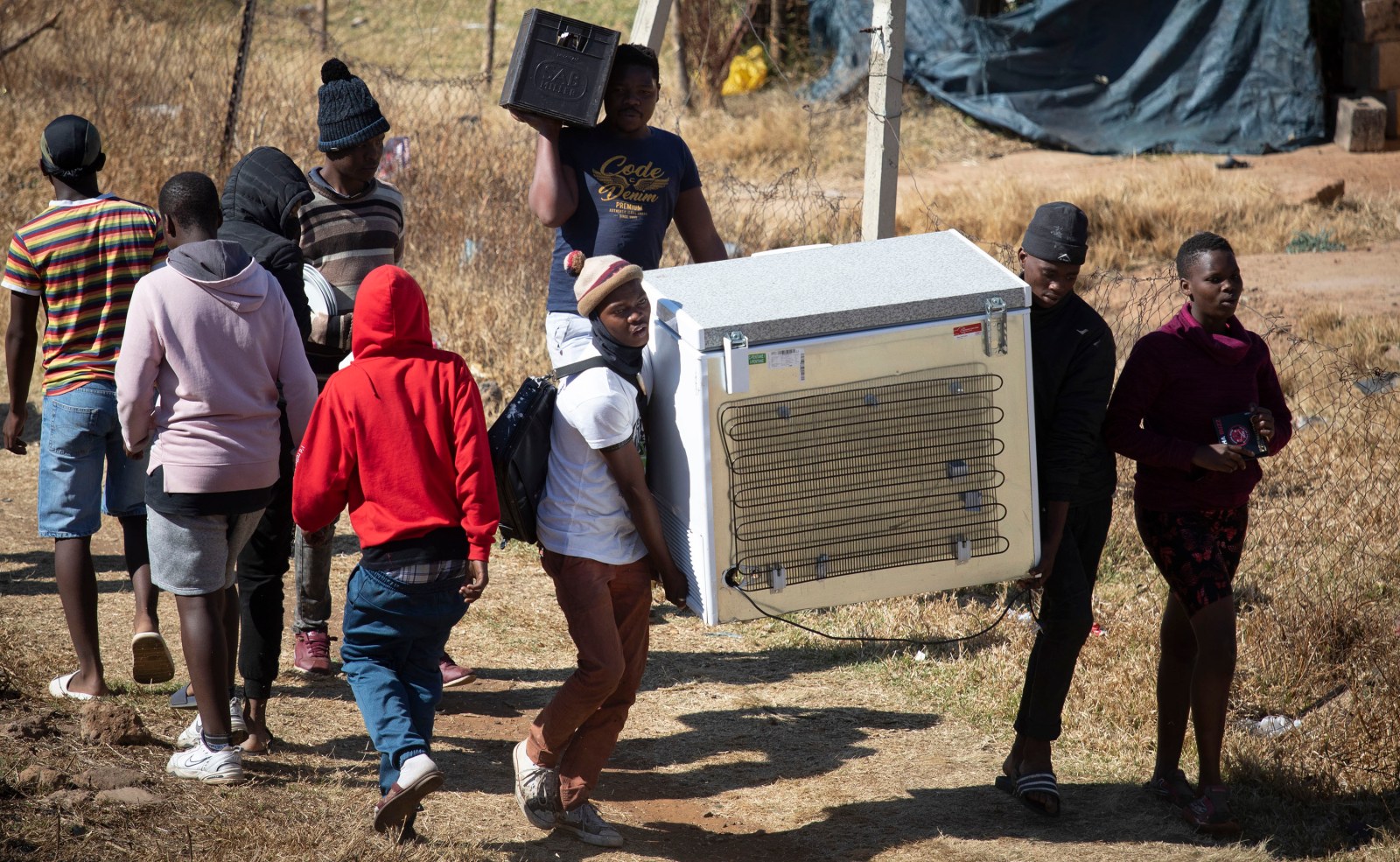 As Parliament’s police committee hearings into the July public disorder look set to start only in 2022, at least some oversight and accountability work is being done by the SA Human Rights Commission in its investigative hearings.

Bongani Mkhize can no longer do his job – drive a bus. He was shot in the back on 14 July when he ran from vigilantes’ bullets after his car was stopped by a security company at Wentworth, eThekwini. Unable to get up after being shot, and hiding, he repeatedly phoned his brother to come help him. Eventually the brother reached him with a metro police escort, the South African Human Rights Commission (SAHRC) heard on Tuesday.

Mkhize was taken to a public hospital by 8pm, but was told a doctor would see him only the next day because of the “heavy workload”. He thought it was a joke. But he was left lying for 17 hours with a bullet in him.

“Nurses kept giving me pills and told me the doctor will only come the next day,” he testified.

“[The bullet] was poisoning because it was scattering in the abdomen,” he testified in isiZulu through an interpreter. “They told me one of my intestines was damaged and they would have to put in something called a stoma that will help me with bowel movement.”

Mkhize has another appointment at the public hospital on 31 January 2022 to determine whether the stoma can be removed.

No update has come from police on the complaint Mkhize laid at Wentworth police station; no police official came to the hospital.

When he called the investigating officer, he was informed there was nothing to report because the case docket, one of many, had not yet been studied. The case also included the vandalism of his car, which when finally recovered had been trashed, with both windscreens smashed, seats and tires “stabbed” and the roof damaged.

It was Day 7 of the SAHRC’s investigative hearings into the July public disorder and looting in KwaZulu-Natal and Gauteng that erupted after ex-president Jacob Zuma went to jail for contempt of court for snubbing the State Capture commission. He served some two months of the 15-month sentence before being released on medical parole on 5 September.

“I would like the culprits to be punished. And I’d like for the government to come on board in terms of giving us support because some of us lost jobs,” Mkhize said.

“I was very saddened. However, because I have my family that gives me great support, I have accepted the situation. I realise it will not help me to carry on being sad.”

Mkhize’s testimony brings home the devastation, and continuing impact on individuals, families and communities from those eight days in July.

It stands in stark contrast to the government’s emphasis on its support to businesses and its special risk insurer, Sasria; of quantifying the economic impact as having shaved off almost one percentage point from South Africa’s gross domestic product; of briefings to assure investors and diplomats; and of haphazard police responses amid lack of intelligence.

That stance again emerged in Parliament – over two days in different Houses.

“We could have done more. We have learned our lessons,” was Deputy Police Minister Cassel Mathale’s reply on Wednesday in the National Assembly.

And that meant putting police on standby to deal with threats doing the rounds, as IFP Chief Whip Narend Singh put it, of possible looting over this special deals weekend starting with what’s dubbed Black Friday.

Mathale also named the arrests of 17 so-called instigators – all but one are out on bail – as part of the SAPS’s action.

“The investigations are continuing. The possibility of additional arrests is not ruled out.”

As far back as 19 August, the parliamentary justice committee was told of a total of 857 cases with 1,549 accused in relation to the July violence.

When the July public disorder and violence was last discussed in Parliament in mid-August, following a spate of committee visits to both provinces, the sessions were mired in politicking and blame-shifting.

While Parliament’s police committee discussed draft terms of references for hearings into the July public disorder on 17 August, these have yet to be finalised. Never mind hearings to be held, Parliament is set to rise for its year-end recess on 10 December.

While the July unrest was of “great concern” to the government and South Africans, “it is not the first time the country experienced riots. Under apartheid we had terrible riots. This does not ameliorate what happened [in July]”.

Responding to IFP MP Mkhuleko Hlengwa’s concern that this period showed an “undesirable” merger of political considerations to a judicial decision, Pandor said she had no proof of such a link.

“I do not have an investigative report that establishes a seamless link,”she said.

A day earlier, in the National Council of Provinces (NCOP) ministerial briefing on economic consequences, Trade, Industry and Competition Deputy Minister Nomalungelo Gina highlighted how the department had paid tens of millions of rands to support businesses, and how a total of 40,215 jobs were saved through targeted interventions.

No, she could not comment on whether ANC factionalism was behind July’s public disorder, nor on the arrests or deaths.

“Let us wait for the processes to unfold. On the matter of consequences, we are still waiting for SAPS,” said the deputy minister.

But the policing front is sending mixed messages at best.

While on 22 July the then minister in the Presidency Khumbudzo Ntshavheni provided a death toll of 337 – 79 people killed in Gauteng and 258 in KwaZulu-Natal – on Monday SAPS National Commissioner Lieutenant-General Khehla Sitole told the SAHRC he could not give a death toll.

“What is delaying us coming up with a final number, [is] the inquest processes have different time frames.”

He said the SA Police Service was “overstretched”, pointing out how that had been the intention of those who organised the deadly July public disorder.

“It would be correct to say we did not do enough,” said the police national commissioner.

But the SAPS did have sufficient resources to put up 11 roadblocks. That emerged in Gauteng Provincial Commissioner Lieutenant-General Elias Mawela’s testimony.

He told the SAHRC that the police regarded leaking of information as a “threat”, citing how details of the 11 roadblocks emerged in social media, amid claims they were set up to stop people heading to Nkandla as the clock was ticking down to the 7 July deadline for Zuma to start his jail term.

“That was not correct. The objective was to address the Covid regulations whereby we need to put roadblocks to manage interprovincial movement,” testified Mawela. At the time, rising infections meant the reimposition of travel restrictions focused on moving in and out of Gauteng.

Mawela also told the SAHRC that no warnings of possible disturbances had been received, even though the provincial intelligence coordinating committee of crime intelligence and state security issued early warning reports daily, risk and threat analysis monthly and weekly intelligence overviews.

Just as KwaZulu-Natal was without its permanent provincial SAPS commissioner – Lieutenant-General Nhlanhla Mkhwanazi was on paternity leave – Gauteng also had an acting commissioner. Mawela had been on sick leave from 14 June to 16 August.

Some of the fudginess seemed to go all the way into Cabinet.

When concerns over the SAPS conduct were raised with Police Minister Bheki Cele it was left up to him to deal with it, according to former defence minister and head of the Cabinet security ministerial cluster, Nosiviwe Mapisa-Nqakula, now National Assembly Speaker.

“I think he [Cele] was embarrassed. I didn’t think it was necessary to hammer. It was enough to say the reception wasn’t good,” she testified at the SAHRC hearings.

Cele was to have testified on Monday, but sent apologies as he is attending the Interpol General Assembly held from 23 to 25 November in Istanbul, Turkey.

It’s expected he’ll get another date with the SAHRC, whose investigative hearings will lead to a set of recommendations and directives.

While Parliament’s police committee discussed draft terms of references for hearings into the July public disorder on 17 August, these have yet to be finalised. Never mind hearings to be held, Parliament is set to rise for its year-end recess on 10 December.

And that means ordinary people like Mkhize, and who knows how many more, only have the human rights commission to ensure they are not left out in the cold – and on their own. DM