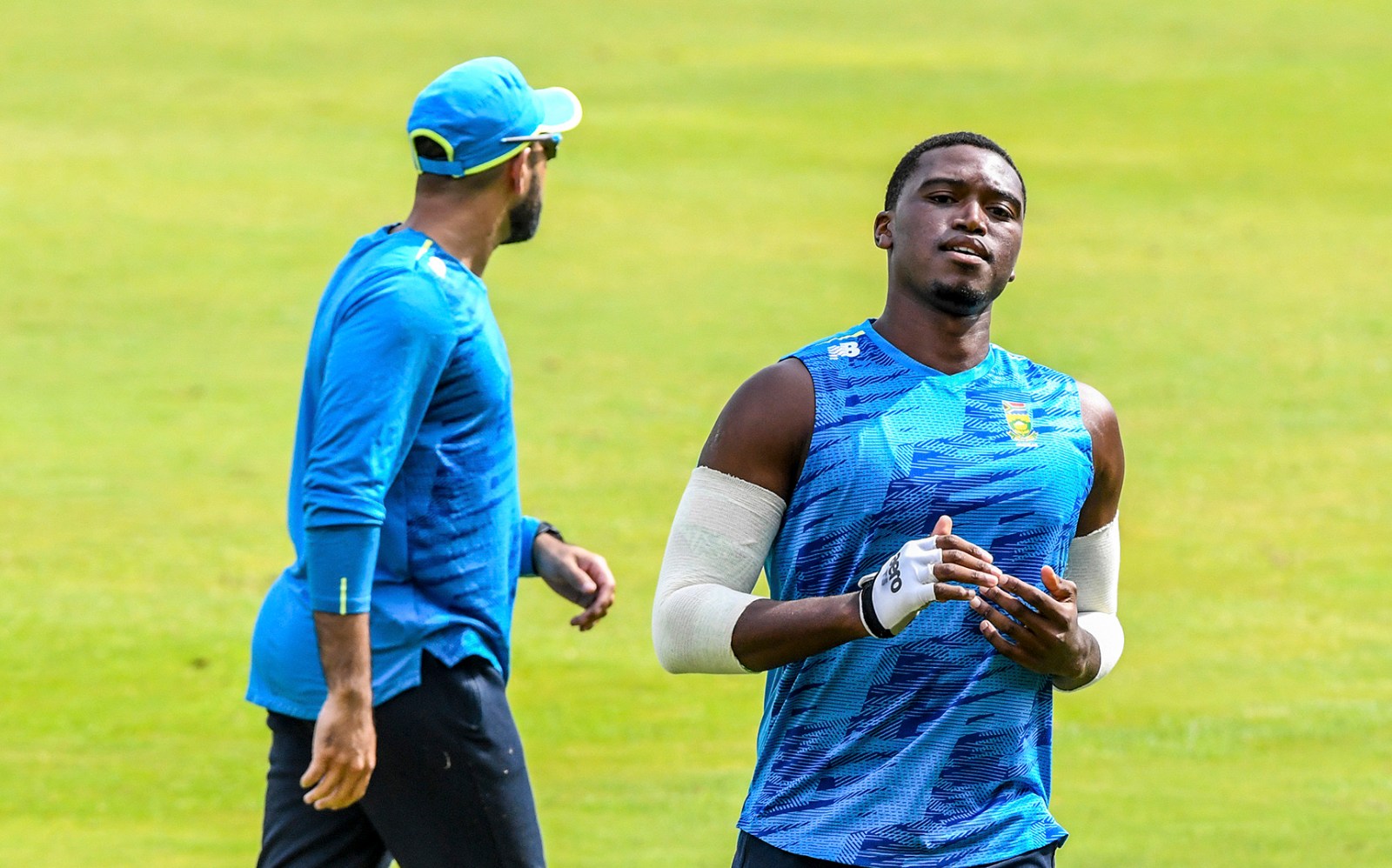 Lungi Ngidi of the Proteas during the South Africa national cricket team training session at SuperSport Park on March 31, 2021 in Pretoria, South Africa. Ngidi was ruled out of the first-ever three-match white ball series against the Netherlands after testing positive for Covid-19 in November 2021. (Photo by Sydney Seshibedi/Gallo Images)

The Proteas’ first assignment of a bumper home summer of cricket started on a sour note with the fast bowler ruled out of the series against the Netherlands with Covid.

It wouldn’t be fitting with the Proteas’ 2021 season if there weren’t a little drama to start off what is going to be a long, packed summer of cricket. And some drama there was.

Fast bowler Lungi Ngidi was ruled out of the first-ever three-match white ball series against the Netherlands after testing positive for Covid. He was immediately placed in isolation after routine testing when the squad regathered for the first time since the T20 World Cup.

According to Cricket South Africa (CSA), Ngidi “is well and in good spirits.” There wasn’t such good news for fellow fast bowler Lizaad Williams who has been ruled out of the Netherlands series with an intercostal muscle strain. Junior Dlala has been called up to the squad.

Although the Netherlands is the appetiser to a summer that includes series against India and New Zealand, there won’t be any complacency from a Proteas team desperate to start the domestic season on a positive note.

As an associate team in the International Cricket Council (ICC) structure, the Netherlands do not carry full Test status. They are among the second-tier nations of world cricket, but the sport is well established in Holland and the Dutch team has been competing on the international stage since 1996.

Current batting coach Ryan ten Doeschate is considered the greatest batter to have come out of the associate nations. Ten Doeschate was schooled in Cape Town before making his name with Holland.

The Netherlands cricket team has played One-Day Internationals in South Africa before, but never against the Proteas, although they have met South Africa four times in other venues around the world.

The Dutch were last in South Africa in 2009 for a World Cup qualifier against Ireland. They also played in a tri-series against Bermuda and Canada in 2007 and most famously competed at the 2003 World Cup hosted in South Africa.

The Dutch won one of five matches at the 2003 tournament. Their solitary win on that occasion was against Namibia in Bloemfontein.

For the Proteas, this series is part of a longer-term plan to be a factor at the 2023 Cricket World Cup. After so many near misses, the Proteas are desperate to finally win some international silverware in the white-ball game.

“Our progress has been a bit slow, but I think there is a plan to everything,” stand-in skipper Keshav Maharaj said this week.

“By 2023, I think we’ll be the finished product and the reason why some results haven’t been going our way is because of the combinations we’ve been trying.

“It’s all about building towards the bigger picture, but we also do need the points to ensure the qualification comes along. However, there is some method to our madness.”

The first hurdle for the Proteas is ensuring they are ranked in the top eight of the ICC’s ODI Super League table to automatically qualify for the 2023 tournament.

To that end, taking a 3-0 series win over the Dutch is essential with a tougher assignment against India to come later this season.

“It’s really important that we do well in this series. There are Super League points at stake,” Maharaj said. “We need to qualify for the World Cup, so every series is important from here on from a points perspective.

“As much as we have rested our regular players, we’re not going to take the series lightly and we’ll try to get as many points from it as possible.”

Speaking of squad depth, the selectors showed that they are serious about reintegrating former Kolpak players in the Proteas setup. Since Brexit ended, several Kolpak players — those who were signed as foreign professionals in English cricket under the European Union Kolpak law and were ineligible for the Proteas — are available to South Africa again.

Left-arm seamer Wayne Parnell has been included in the squad to face the Netherlands after four years away as a Kolpak player in England. Others such as Rilee Roussouw and Duanne Olivier fall into the same category as Parnell.

“I didn’t set out my store to say I am coming back into South African cricket and I want to play for the Proteas again,” Parnell told a media conference.

“I was quite happy coming back to Western Province and trying to add value to their environment. But then it led to these bigger things. For me, I don’t have any expectations.

“He (Victor Mpitsang, convener of selectors) asked me if I was interested in playing international cricket and I said I cannot turn down my country. I am fully committed to the path going forward.

“I haven’t spoken to anyone else besides Victor in terms of where do I fit in, am I just filling in a gap or is there an opportunity to take this forward,” Parnell said. “Once we get into camp, I will have to sit down with Mark (Boucher) to understand what the thinking is. But I am available.”

Parnell has represented several teams since his departure from South Africa following the 2015 World Cup, and he believes he has learned and improved as a player and person through his travels.

“In England, when it comes to white-ball cricket, every team is dangerous and that was the thing that took me by surprise initially,” Parnell said.

“When you are playing international cricket, it’s a little bit different because I don’t feel there is a lot of helping each other because I am fighting for my spot.

“Other players are fighting for their spot, so when there were more senior players the transfer of information and knowledge wasn’t as forthcoming, whereas my way of looking at cricket now, is completely different.

“I know what I can do and I feel comfortable with what I can bring to any team and that’s been my biggest focus over the last couple of years — focusing on myself and not focusing on the next guy.

“I’ve always seen myself as a leader within the team,” he said. “Maybe I haven’t been given enough responsibility in the past but when the opportunity came up at Western Province and it was something I grabbed with both hands.

“It’s something I really wanted to do. I really enjoy helping people, helping the younger guys and trying to get them to the next level, trying to pass on the knowledge that I have picked up in years of playing.” DM