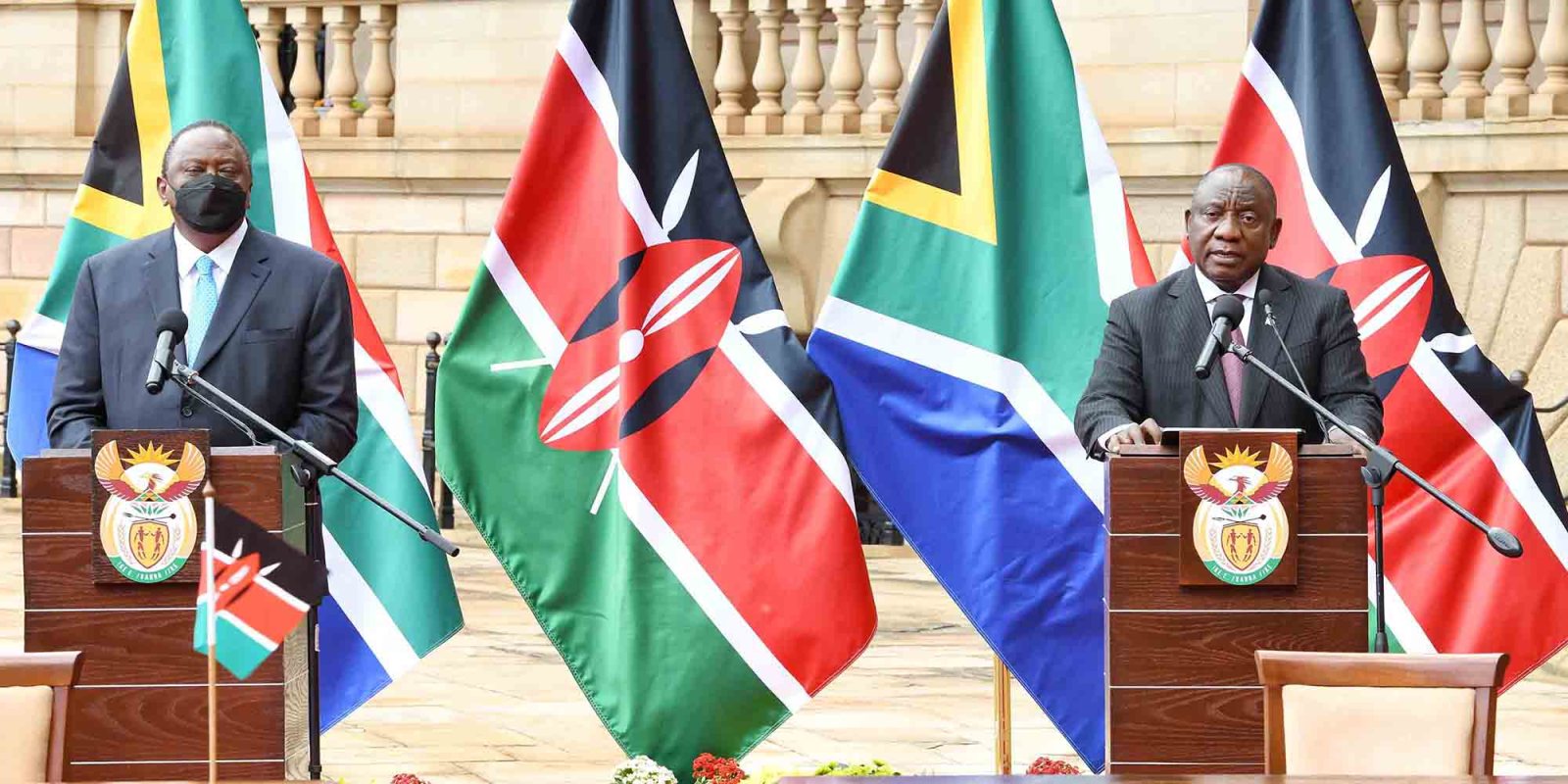 ‘The threat by insurgents should never be seen as localised, as just focusing on one country,’ Ramaphosa said. ‘They cooperate, all these groupings that come in different names. They coordinate their activities.’

President Cyril Ramaphosa says Islamist insurgents who have been attacking countries in Africa such as Mozambique and Uganda could find their way to South Africa too.

“But they will find us ready as well,” he said, at a press conference in Pretoria with visiting Kenyan President Uhuru Kenyatta.

The Islamic State – to which insurgents in Mozambique, Uganda and eastern Democratic Republic of Congo are affiliated – warned last year that it would retaliate against any country which sent troops to fight the insurgency in Mozambique’s northern Cabo Delgado province.

In July this year troops from South Africa and other regional states did enter Cabo Delgado to tackle the insurgency as part of a military intervention force of the Southern African Development Community (SADC).

Kenya has suffered several terrorist attacks on its soil in retaliation for its military intervention into Somalia to fight the Islamist insurgent group al-Shabaab after the group attacked and killed foreign tourists in Kenya.

Ramaphosa and Kenyatta agreed that the different insurgencies across the region were all working together and that the governments of the region needed to cooperate to combat the insurgents’ threat.

“The threat by insurgents should never be seen as localised, as just focusing on one country,” Ramaphosa said. “They cooperate, all these groupings that come in different names. They coordinate their activities. They are in constant communication.

“And we therefore need to respond in a coordinated manner as the continent and as various regions on our continent… in sharing information, sharing intelligence and… working together to withstand and resist and go after them.”

Ramaphosa said that the member states of SADC had already found that working together was “bearing a great deal of fruit and success in the Mozambique theatre. But that theatre can spread very quickly and easily… as Uganda is now bearing the brunt of all of this.”

Ramaphosa said South Africa was cooperating closely with Ugandan President Yoweri Museveni in tackling the threat and Uganda had also shared information on an ongoing basis with South Africa.

“And we as South Africa and also as the SADC stand ready to give assistance as we also get assistance from friendly sister countries like Kenya, Uganda and many others.”

He said insurgents would always want to flee countries where they were feeling the heat put on them by governments.

Kenyatta said some of the insurgents fighting in Mozambique were from Uganda or Tanzania and vice versa. Though the insurgencies had different names, they were all working together.

“And therefore we as governments need to work together, to defeat this enemy of the people,” he said, noting that he and Ramaphosa had discussed the problem. “Today it will be Uganda, tomorrow it will be elsewhere.”

Ramaphosa said at the press conference that he had raised with Kenyatta the issue of the “so-called accreditation” of Israel as an observer to the African Union (AU). This move annoyed South Africa, which had publicly expressed its “disquiet” at the decision, as Ramaphosa put it on Tuesday.

But Kenya has close ties to Israel and is believed to have been one of the states behind the admission of Israel to the AU.

Ramaphosa said he and Kenyatta had agreed that the matter “could have been done better” and it would be fully examined and properly discussed at the next AU heads of state summit in February.

Kenyatta said it was important to carry all African states along on such an important issue.

“And, unfortunately, this didn’t quite happen. It should have allowed discussion, because what we want is for Africa to speak with one voice.” DM