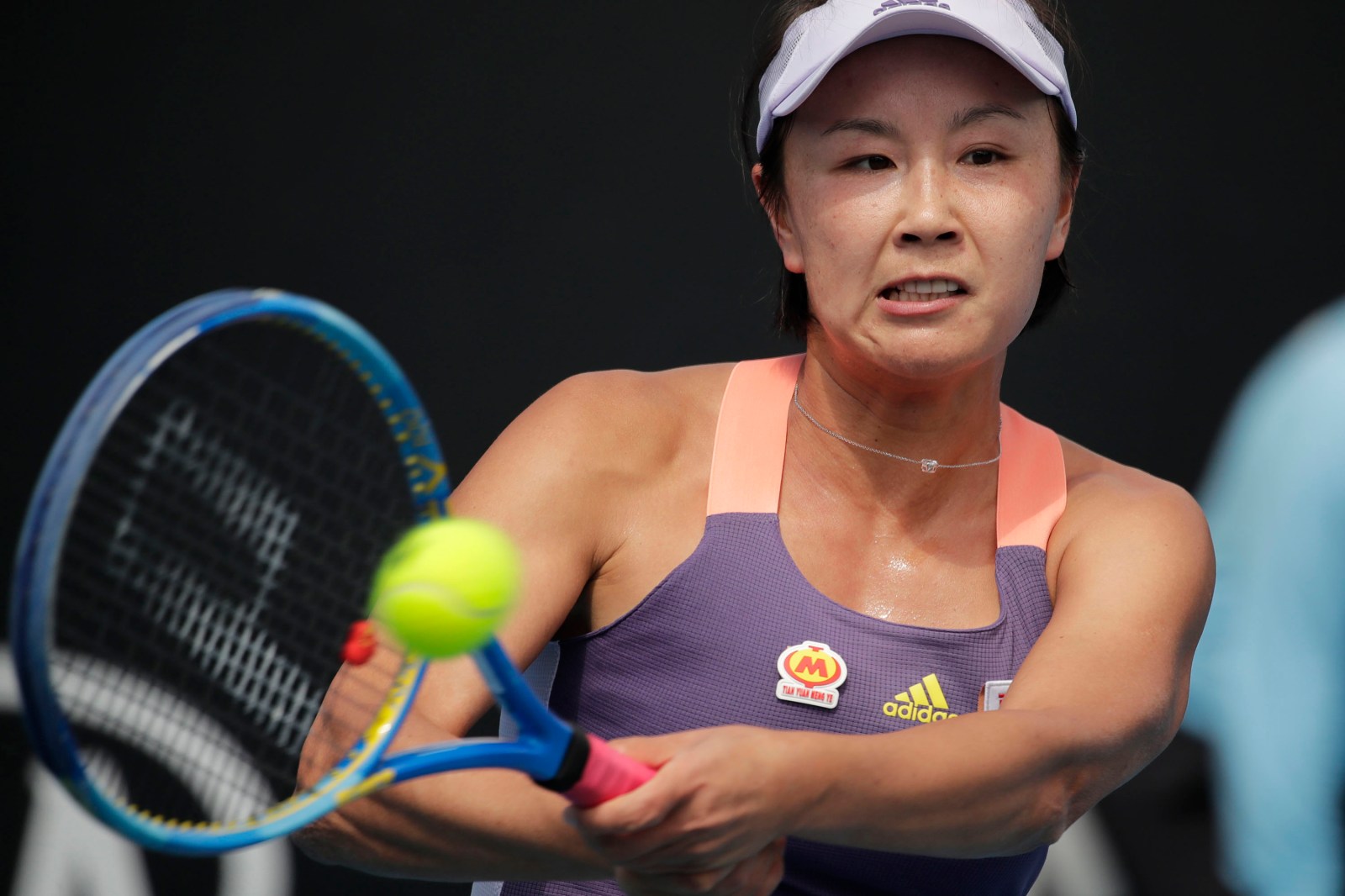 Peng Shuai of China during her first-round match against Japan's Nao Hibino at the Australian Open in Melbourne on 21 January 2020. (Photo: EPA-EFE/Francis Malasig)

The well-being of the Chinese tennis player, after she made claims of being sexually assaulted by a leading member of the country’s government, is still unclear despite China’s efforts to diffuse the story.

Tennis star Peng Shuai’s sexual assault allegation and its aftermath have brought the realities of China’s censorship and secrecy around its leadership to global attention just as Beijing prepares to host the 2022 Winter Olympics.

Peng, who was not publicly heard from for nearly three weeks after alleging that former vice-premier Zhang Gaoli sexually assaulted her, told International Olympic Committee (IOC) president Thomas Bach on Sunday by video call that she was safe and well.

The Women’s Tennis Association (WTA), which has led calls for an investigation into her allegations, remained unconvinced. Some Western governments and top current and former tennis players have called for reassurance that Peng is safe.

While the international furore has been awkward, experts say the priority for an increasingly confident Beijing is avoiding embarrassment at home for the ruling Communist Party and President Xi Jinping, an approach it will likely stick with even as the Olympics puts it on the global stage.

“For some years now, China has responded to negative global attention either by giving an unconvincing explanation, or by stoically pretending the criticism isn’t there,” said Zhang Ming, a retired professor of politics at Renmin University.

Beijing’s censorship machine has allowed it to suppress the scandal domestically in China’s tightly controlled cyberspace. Censors quickly deleted Peng’s post on the Twitter-like Weibo platform on 2 November, and the topic remains blocked from direct online discussion, forcing people to use linguistic trickery to work around it.

But its attempts to control the narrative have jarred overseas audiences, and the case of Peng — a former Olympian and doubles world No 1 — has added fuel to calls from rights groups and politicians in some countries for boycotts of the Winter Games in February.

Efforts by Chinese state media journalists to allay concerns on Twitter, including the posting of a purported email from Peng saying “I’ve just been resting at home and everything is fine”, were criticised by the WTA and some rights groups as unconvincing. Twitter is blocked in China and these journalists have not posted the same content on Chinese social media platforms.

Officials in China often speak about how the country must “tell China’s story well” on the global stage, said David Bandurski of the China Media Project, a research organisation in Hong Kong.

“In a single stroke, the Peng case has exposed the bankruptcy of these ambitions,” he said.

China’s State Council Information Office did not immediately respond to a request for comment.

China’s foreign ministry has said, when asked, that Peng’s case was not a diplomatic question, despite the concerns raised by the UK, United States, and France.

On Tuesday, Chinese foreign ministry spokesman Zhao Lijian urged “certain people” to stop the “malicious hyping” and “politicisation” of the issue of Peng.

‘The thing people talked about’

While the Chinese government has been silent on Peng’s allegations, Global Times editor-in-chief Hu Xijin, a prominent state media journalist, has continued to comment on the case on Twitter, serving as de facto messenger to the world outside.

He has not mentioned Zhang, the former vice-premier, referring only to “the thing people talked about”.

“Those who suspect Peng Shuai is under duress, how dark they must be inside. There must be many, many forced political performances in their countries,” he tweeted on Sunday.

But the episode is adding to calls for an Olympic boycott from rights groups and others already critical of Beijing over its policies in Hong Kong and the treatment of minority Uyghurs in the western region of Xinjiang.

President Joe Biden has said the United States is considering a diplomatic boycott, meaning no US officials would attend the opening ceremony.

On Monday, the Global Times published an editorial accusing “anti-China forces” of trying to make trouble ahead of the Olympics and said it was “not worthy” for China to expend energy on the matter. It did not mention Peng.

Temporary disappearances from public life following a scrape with authority are not unheard of in China.

Alibaba founder Jack Ma disappeared from view for three months after blasting Chinese regulators in a speech last October. Fan Bingbing, an A-list movie star who appeared in the “X-Men” and “Iron Man” franchises, vanished from the public eye for four months in 2019 with no reason given until she was fined over $120-million by Chinese authorities for evading taxes.

A Chinese #MeToo movement took off in 2018 and spread to universities, NGOs, media and other industries but was largely stifled by authorities, with no cases involving any official approaching Zhang’s rank.

The episode also demonstrated the extreme secrecy surrounding the country’s ruling elite, with few details of their personal lives publicly available. Zhang, who retired from public life in 2018, has not commented on the situation.

China’s foreign ministry said this week that “certain people” should stop the “malicious hyping” and “politicisation” of the issue of tennis star Peng Shuai, as foreign governments and organisations continue to raise questions around her wellbeing.

“This is not a diplomatic matter,” Chinese foreign ministry spokesman Zhao Lijian told a regular press briefing on Tuesday.

“I believe everyone will have seen she has recently attended some public activities and also held a video call with IOC President Bach. I hope certain people will cease malicious hyping, let alone politicisation.” Reuters/DM