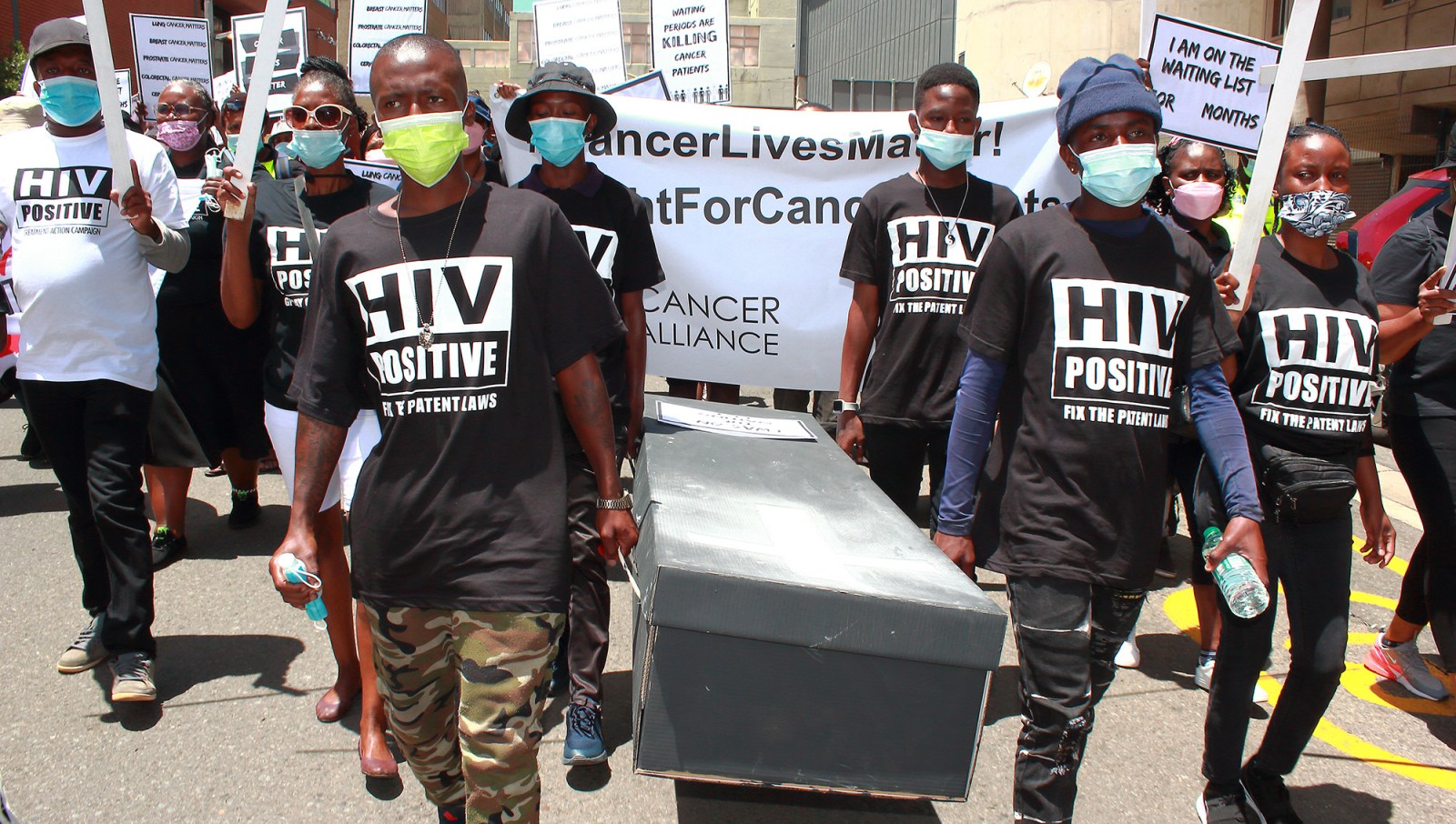 Jeanette Nkabinde pulled her prosthetic breast from her bra and placed it on the black top of a mock coffin left at the steps of the Gauteng Department of Health’s head offices.

She said she wanted the government, represented by Gauteng Health MEC Nomathemba Mokgethi, to really see cancer patients — people like her failed by a collapsed healthcare department that is made up of officials who fob off patients by putting them on treatment waiting lists. Some patients die before they get treatment, activists have long warned. Nkabinde has been on the waiting list for 12 months.

She was part of a Cancer Alliance and Treatment Action Campaign (TAC) march that made its way from Beyers Naude Square to the Gauteng Department of Health’s office in Newtown on Tuesday morning to highlight the cancer crisis in South Africa.

Dressed in black, marchers carried a mock coffin and white crosses to represent the growing number of people affected by and dying from cancer.

The WHO’s International Agency for Cancer Research 2020 put the total number of new cancer cases for that reporting period at just more than 108,100 in South Africa; the number of prevalent cases over a five-year period stood at around 263,000, and deaths in the reporting period were close to 57,000 people.

The Cancer Alliance’s Cost of Cancer report released in August 2021 predicts a doubling of cancer cases by 2030 with at least R50-billion needed by then to address a looming medical and human crisis.

But before the decade is out and before future budgets are thrashed out, the protesters’ immediate call is for the Gauteng Department of Health to stop denying the years of crisis that have beset the oncology unit at Charlotte Maxeke hospital.

Tuesday’s march was prompted by the longstanding crises at the hospital, which has one of only two radiation treatment facilities in the public sector for Gauteng.

The devastating fire at the hospital in April was just another addition to a list of problems that includes staff shortages, staff on go-slows because of salary disputes, and specialised equipment that has not been replaced or maintained.

The oncology unit came back on stream in the past few weeks, but is still functioning at suboptimal levels — even as the patient waiting list grows. There is greater population demand for treatment, with one reason being that cancer is not detected early enough, especially in the public sector. Later-stage diagnosis means intervention by chemotherapy and radiation becomes critical. According to the Cancer Alliance, the current backlog for radiation treatment at the hospital is more than 2,000 patients.

“I put my prosthetic breast on that coffin because I wanted to send a message. This is our lives, the situation is very painful for us — the government must know that they are killing patients by keeping us on waiting lists, then sending us home to die and not fixing hospitals or employing the right people to run the services,” Nkabinde said.

“It’s very sad and it makes me angry when we know that we have to send patients home to die,” she said.

Zuziwe Mdlulwa feels the same way. The breast cancer patient was diagnosed in 2010. She beat cancer that time round, but in 2019, the cancer returned and has now spread. She’s been on a waiting list since 2019.

“Sometimes I am scared to go to sleep because I don’t know if I will wake up. When you get a headache you worry; you think it’s the cancer. I used to go to a support group and there some of the women would say they don’t even take their painkillers any more because they are just given Panado by the hospital staff when they need real cancer treatment,” said Mdlulwa.

TAC’s national chairperson, Sibongile Tshabalala, slammed government officials in her address for playing politics and focusing on trying to win votes every five years instead of delivering on health services and upholding the Constitution.

She said hospital infrastructure had been allowed to crumble and facilities had not been properly managed for years — “the government is not even trying”.

She said: “We are unable to access services because of corruption. I am angry as hell that, for government, if you cannot afford medical aid, if you can’t buy your own medicines then you must die. That’s why we are not here to beg for services, we are here to demand that patients be heard.”

Teboho Tenyane, provincial TAC chairperson, was equally scathing, calling out officials for ignoring patients’ cries and MEC Mokgethi for being out of touch with the people she has vowed to serve — Mokgethi was flanked by two bodyguards and a phalanx of police officers and metro police to receive a memorandum at a peaceful protest.

Tenyane slammed cadre deployment that has put untrained and incapable people into positions where expertise and commitment are necessary to fix ailing healthcare systems.

He also pointed out the shameful legacy of health MECs in the province, those who have been linked to corrupt dealings, fraud and poor decision-making, including what led to the Life Esidimeni tragedy.

He said that senior implicated politicians had been protected and rewarded by the ANC shuffling them into different positions, “even as our mothers, sisters, fathers and brothers are dying — this government does not care”.

Meyer called for the government to release radiation equipment supposedly purchased, but still not installed in hospitals; to settle salary parity disputes at Charlotte Maxeke hospital; and to accelerate the training of specialised oncology staff.

The memorandum handed to the Gauteng Department of Health also calls for proper communication with each patient on the treatment waiting list, as well as the establishment of a task team that must include civil society and technical experts to advise, oversee and fast-track the procurement of radiation equipment and services in the province. This task team must also implement an integrated plan by World Cancer Day on 4 February 2022. DM/MC