NOT A DROP TO DRINK 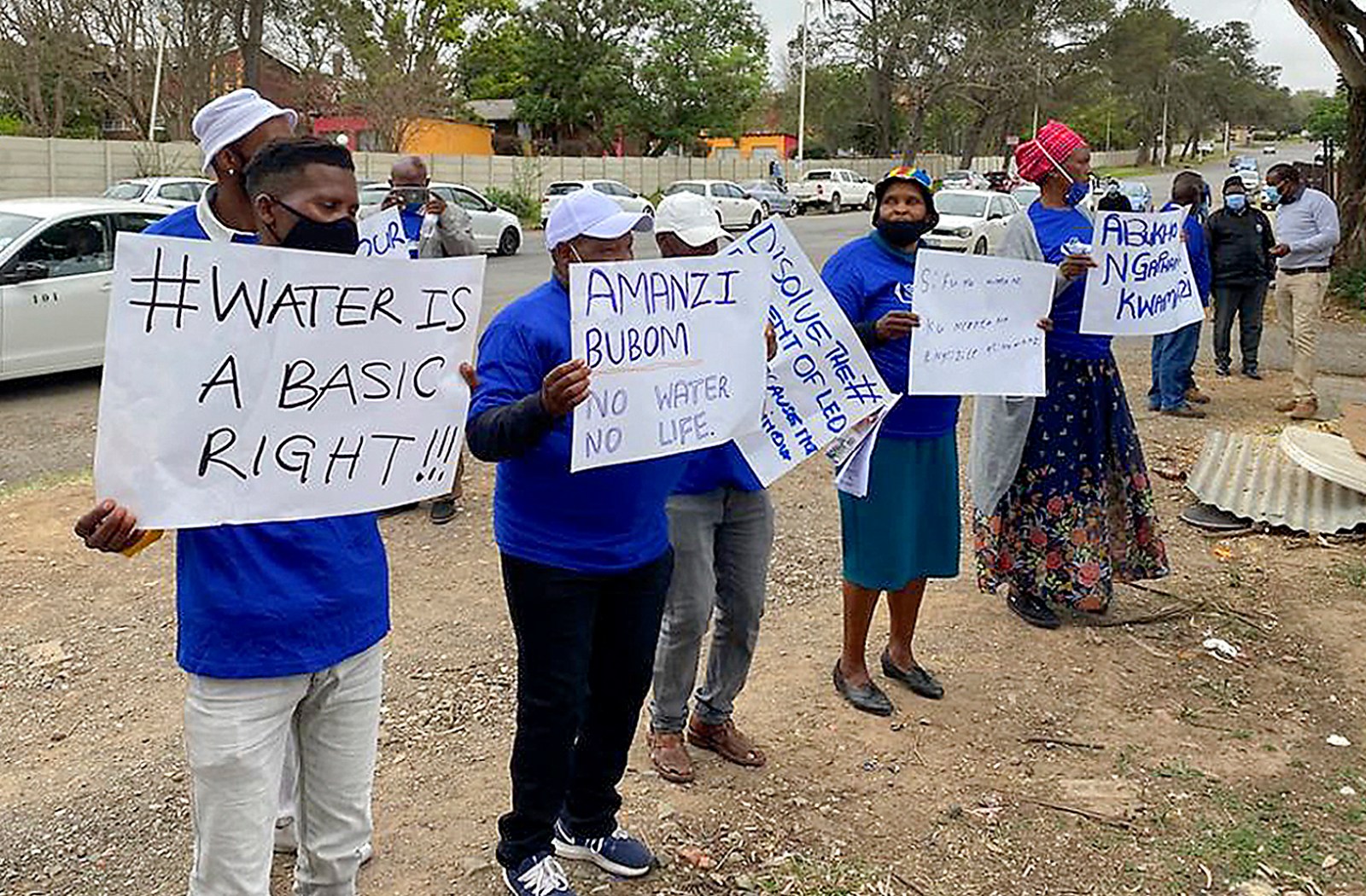 Villagers from Centane in the Eastern Cape protest about a critical lack of water. (Photo: Supplied)

Municipal failures have left rural residents in the Eastern Cape high and dry since 2018. Since then, community members, including the elderly have had to resort to collecting contaminated water from the nearby Nqusi and Nxaxo rivers. This is the tale of two pensioners from Centane.

Two pensioners from Centane in the Eastern Cape are leading the fight for the high court to force the national and provincial governments to be held accountable for a desperate water situation caused by municipal failures in their villages. The court has ordered the municipality and both the provincial and national governments to file plans on how the issue will be addressed. So far only the Amatole District Municipality has filed a plan.

The Amatola Water Board said it was still working on a deal to insure the drivers of water trucks who are not employed by the board, but added its assistance will be for only two months.

Nosisa Sogayise from the Water Board said the board signed a memorandum of understanding with the municipality on 16 November.

“Amatola Water is now working on the logistics to release the trucks to the municipality for operation, however amendments to the insurance have been made to cover the truck drivers [who] are not Amatola Water Board employees.”

The court gave the authorities until the end of the month when it will make its own order if the situation has not been resolved.

Communities have already appointed their own water monitors to make sure that the plans are carried out, but now they are in limbo.

The villages last had water in 2018. This was their evidence before the Mthatha high court:

Mentani Mkalitshi is 64 years old. She, her daughter and her cousin live on her old age grant. They try to make ends meet by growing vegetables but a prolonged drought in the Eastern Cape has made this very difficult. Their closest borehole is a 45-minute drive away but they do not have a car. They use a pit toilet.

“We had taps between 2008 and 2018 but then they ran dry. There are two rivers near my house. The Nqusi River is closest but there is a big hill. The Nxaxo River is further but it has no hill. We collect water three times a day … The water is very dirty. We always boil it first. If you don’t boil it, it will make you sick. To boil it we need electricity.”

She said people use the river to wash themselves, their clothes and to allow their livestock to drink. Sometimes people throw used nappies in the river.

“We have no choice. We have to drink this water,” she said.

Mikalitshi bought a water tank in an effort to ensure a water supply for her home. “It is completely useless when there is no rain.”

A man in her village asks R850 to collect 2,500 litres of water for the tanks and if they have the money they pay it.

“If you take a death certificate to the municipal offices they will send a water truck for the funeral. Sometimes. But the water will only be for the family who is having the funeral.”

She said after a meeting with traditional leaders their water was reconnected between September and November 2020 but then the water stopped again.

Harvey Ntsoko (72) was one of the community leaders who were arrested during the hard lockdown in April for “calling a meeting about water”.

He was later acquitted.

Ntsoko has six children: four boys and two girls. His family must use a pit toilet.

He said they used to have six taps in his village, Nomanjana, but they all ran dry within a month of being installed.

His family now collects water from the Kobonqaba River, a 90-minute walk away. Because they can collect 40 litres of water at a time, they must go twice.

They go early, Ntsoko said, because it was imperative to get to the river before the livestock did.

“It is painful to see people going through these hardships because of a lack of access to water.”

He said that the municipality had been telling them since 2018 that it was “fixing the problem”.

Ntsoko said a number of villages in the Centane area received a single water tank during the rollout of emergency water in April 2020. “It was filled only once.” DM168