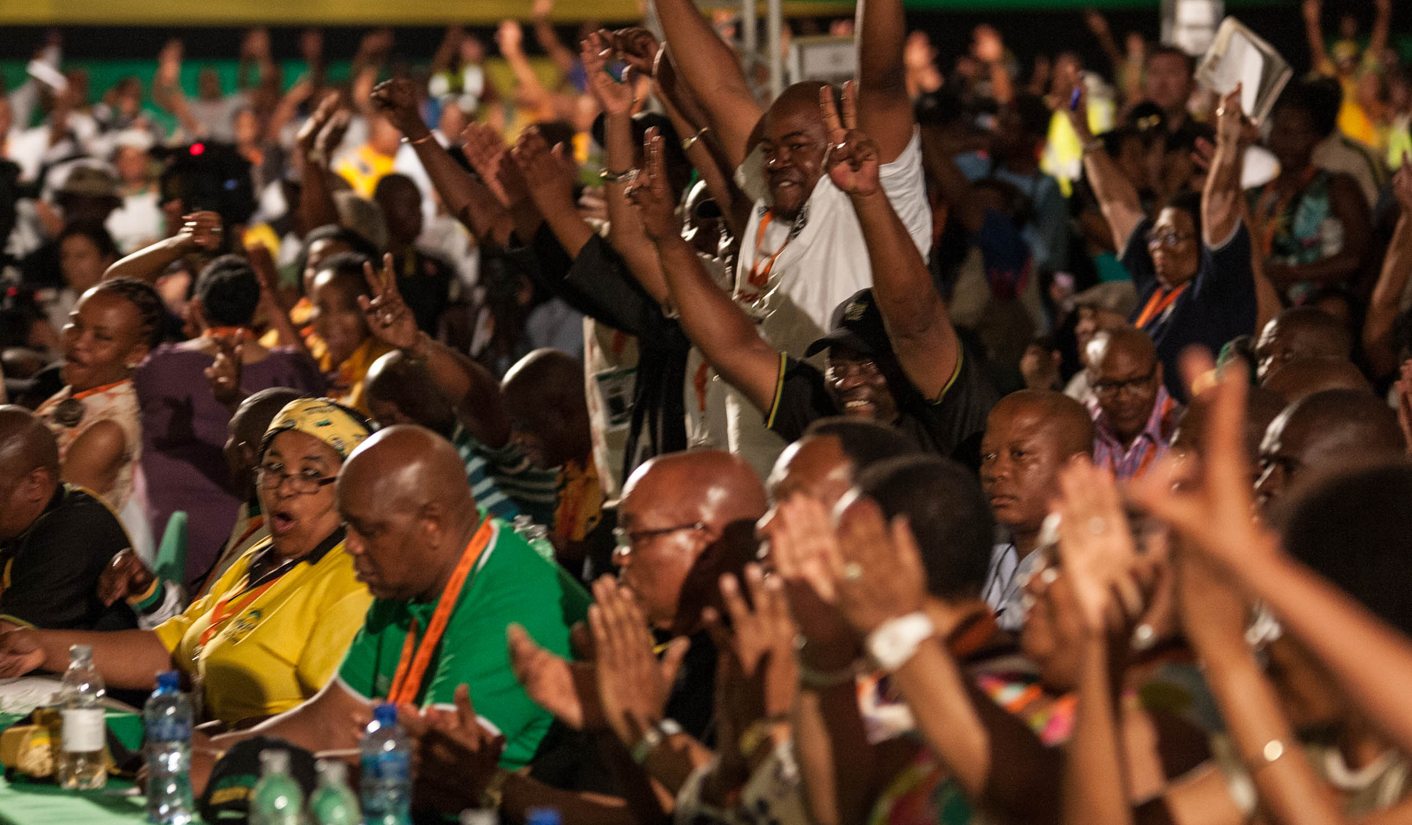 The imminent arrest of at least three top Crime Intelligence cops implicated in several heists of public funds in Jacob Zuma’s interest is a tiny green sprout in the fight against SA Police Service corruption.

On 14 December 2012, Sally Evans, in the lead-up to the ANC’s 53rd elective conference in Mangaung and writing in the Mail & Guardian, remarked that the Free State town was awash with Crime Intelligence (CI) operatives.

A source told Evans that the deployment had not been to ward off any “threats” to Jacob Zuma (none had been found) but to ensure at “all costs” that his faction won.

The contender, former president Kgalema Motlanthe, was a walkover. His presence was more a sign of protest than any real challenge to the rock-solid 100% Zuma cult.

Nine years later and Daily Maverick has learned of the imminent arrest of Major-General Obed Nemutanzhela, who, as head of the Secret Service Account (SSA), allegedly signed off a hot cash budget for a rogue CI unit to splash at the ANC’s 53rd elective conference at Mangaung.

The major-general was also named as a key enabler and suspect in attempts to thwart an Independent Police Investigative Directorate (Ipid) investigation into former acting national commissioner Khomotso Phahlane, now himself facing criminal charges over corruption.

Back in 2012/13, the aim of the about 30-person unit — made up of a rag-tag bunch of moonlighting Military Intelligence operatives and CI members, recruited (with the promise of promotion) by CI’s notorious Captain Morris “KGB” Tshabalala — was that Zuma triumphed.

Tshabalala was a convicted criminal at the time, but what the heck. He was loaded with R50-million prepaid from the slush fund to go round — or so he boasted.

The life and times of Tshabalala can be conjured by a simple Google search, but it is a rabbit hole that we warn might cost you your sanity.

Nemutanzhela had been thrice charged departmentally by suspended and then unsuspended CI head Lieutenant-General Peter Jacobs.

But the major-general stuck around, like a blackjack on a picnic blanket.

So much so that as recently as between 31 May and 21 June he was the actual overall boss of the Crime Intelligence Division.

This was in the absence of the recently appointed Major-General Yolisa Mokgabudi (to replace Jacobs), who was elsewhere engaged — though we are yet to understand where.

Then in July 2021 came the “Nine Lost Days” when a well-planned and orchestrated attack on the country broke loose in KwaZulu-Natal and Gauteng.

Flames grew and licked, knives and machetes slashed and the sound of gunfire filled the nights as Zuma was hauled off to serve a 15-month sentence. One for which he has since, thanks to Arthur Fraser, received medical parole.

Zuma today is a free man and still walks, talks, tweets and stalks the hills and valleys of the Radical Economic Transformation terrain, both real and imagined.

President Cyril Ramaphosa finally emerged from the ruins and smoke to admit that “an insurrection” had indeed taken place.

More than 300 people died, businesses lost billions. Infrastructure was sabotaged and destroyed. It took weeks for South Africa to mop up.

We are still busy. The SA Human Rights Commission’s inquisitorial hearings are taking place as we speak.

Nemutanzhela had been appointed to act as head of CI for 21 days by the now conveniently late (as we say in South Africa) Lieutenant-General Sindile Mfazi.

Mfazi, who died on 8 July and was buried in the Eastern Cape, has since been exhumed after allegations that he may have been poisoned. Months later the SA Police Service (SAPS) has left the public and presumably the family in the dark.

Pause here and rewind for a moment to December 2017 and the ANC’s elective conference at Nasrec.

This time it is down to the wire as the Zuma faction’s preferred candidate, Nkosazana Dlamini Zuma, faces off against Ramaphosa.

Ramaphosa is up against a mighty adversary with flights of acolytes, praise singers and vicious minions with seemingly unlimited, and criminal, access to taxpayers’ money, both through the State Security Agency (as evidence to the Zondo Commission revealed) and the SAPS Crime Intelligence, Secret Service Account.

Daily Maverick has learnt that Ngcobo’s arrest too is imminent.

In November, with a month to go, Zuma appointed Khehla Sitole as SAPS National Commissioner.

Sitole and two of his deputies, Francinah Vuma and Lebeona Tsumane, were found by a court in January 2021 to have breached their duties by refusing to hand over to Ipid, classified documents relating to a R45-million “Nasrec grabber” grift which went down days before the ANC conference.

In Vuma’s court papers in the Ipid matter, she set out how Ngcobo had driven the purchase of the grabber surveillance device at an inflated price from a supplier who was in business rescue at the time. She suggested that he in turn had been alerted by a “minister in the security cluster”.

A “threat to national security” had been cooked up as justification, while the SSA’s own risk assessment found no threat, apart from ANC members themselves, that is.

Sitole remains in his job for now, with the threat of an inquiry into his fitness to hold office hovering over him.

Jacobs, before his suspension by Sitole, had ordered an investigation (on 14 August 2020) into alleged misconduct by Moodley.

Galawe’s report, which Daily Maverick has seen, concluded that enough evidence existed to warrant “an expeditious process in terms of Regulation 9 of SAPS Disciplinary Regulations” against Moodley.

Moodley has also been accused of using taxpayers’ money to fund a personal road trip to Durban and a stayover in a luxury beach hotel. It is also alleged that Moodley registered a black VW Golf GTI registered to CI in his own name and pimped it with blue lights and police sirens.

Further allegations are that in 2016, Moodley and a colleague used a house that belonged to a colleague as a “safe house” and had claimed between R40,000 and R50,000 a month for this.

At this stage, we have not been able to confirm the exact charges the three above-mentioned police officers will face after their arrest, but we are, it is clear, spoiled for choice.

The Mail & Guardian’s Khaya Koko reported on Friday that “high-ranking generals” would soon be rounded up.

The Nasrec grabber is just one CI procurement that has been highlighted. The other relates to equipment ordered to monitor the #FeesMustFall student movement, but that was never delivered.

While it might be tempting to despair at this precise moment in the ongoing flushing of the system, these imminent arrests are hugely significant.

They are a result of years of relentless and often thankless work by a few out-of-public-view Ipid and SAPS officials who are keeping the organisation together as it tips dangerously towards falling apart.

There are more to go, but this elephant has been significantly consumed. But it still stands, rogue, wounded, with access to public funds. The sooner the deep root canal treatment happens, the better for us all. DM