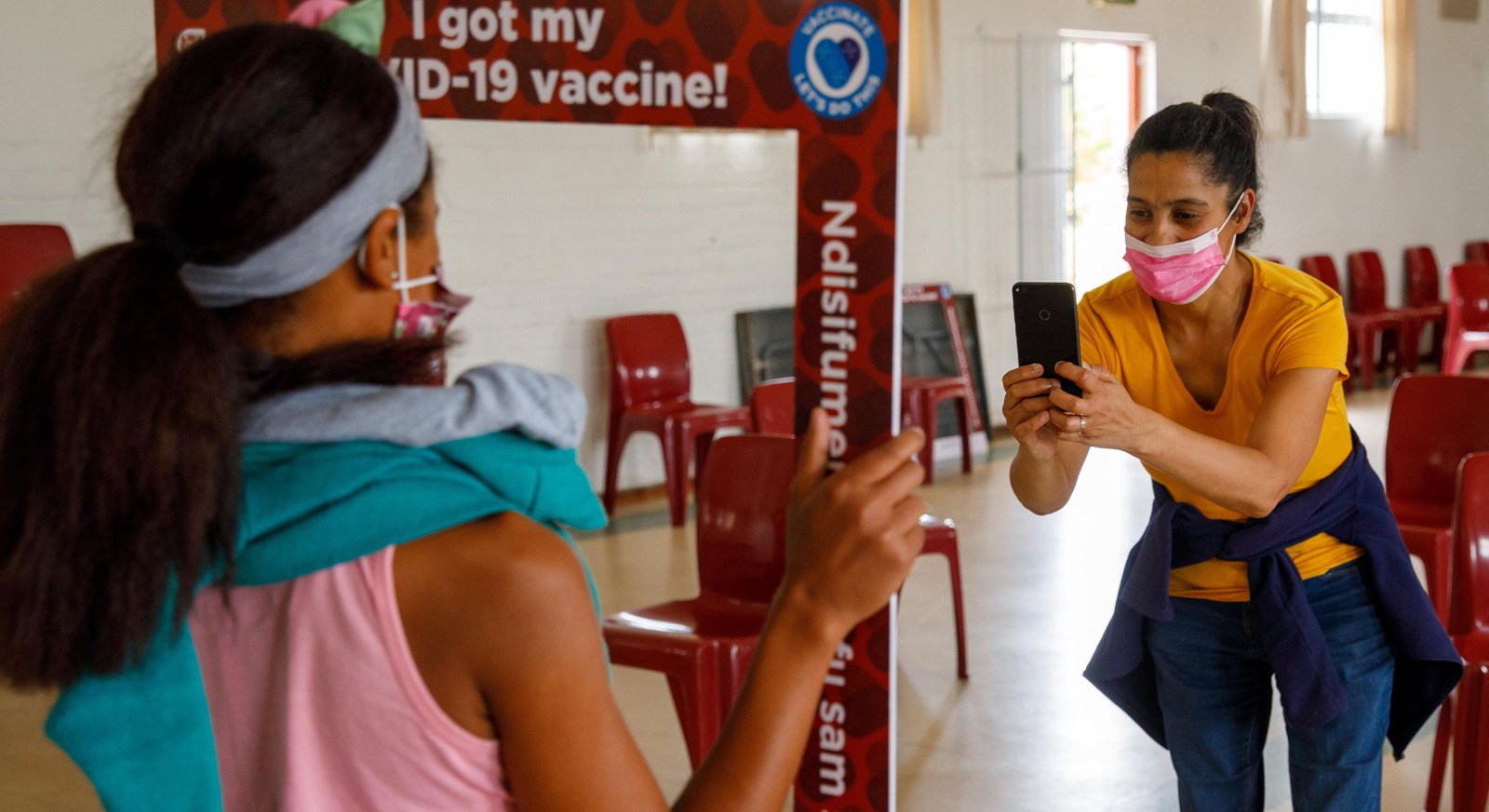 Germany’s latest surge in Covid-19 infections is worse than anything the country has experienced so far, Chancellor Angela Merkel said, calling for tighter restrictions. Austria, which went into its fourth national lockdown on Monday, is threatening fines of up to $4,000 for people who refuse a shot once mandatory inoculations kick in next year.

Pfizer-BioNTech said their vaccine demonstrated 100% efficacy against Covid-19 in adolescents aged 12 to 15 in a longer-term analysis, with no serious safety concerns identified. New Jersey reported a spike in cases at schools across the state.

In Hong Kong, JPMorgan Chase offered to reimburse employees up to $5,000 to compensate for their quarantine stay as the financial hub sticks to its zero-Covid policy. Australia will allow students and overseas workers to enter from the start of December, and New Zealand will shift to a new alert system as it moves away from the use of lockdowns. 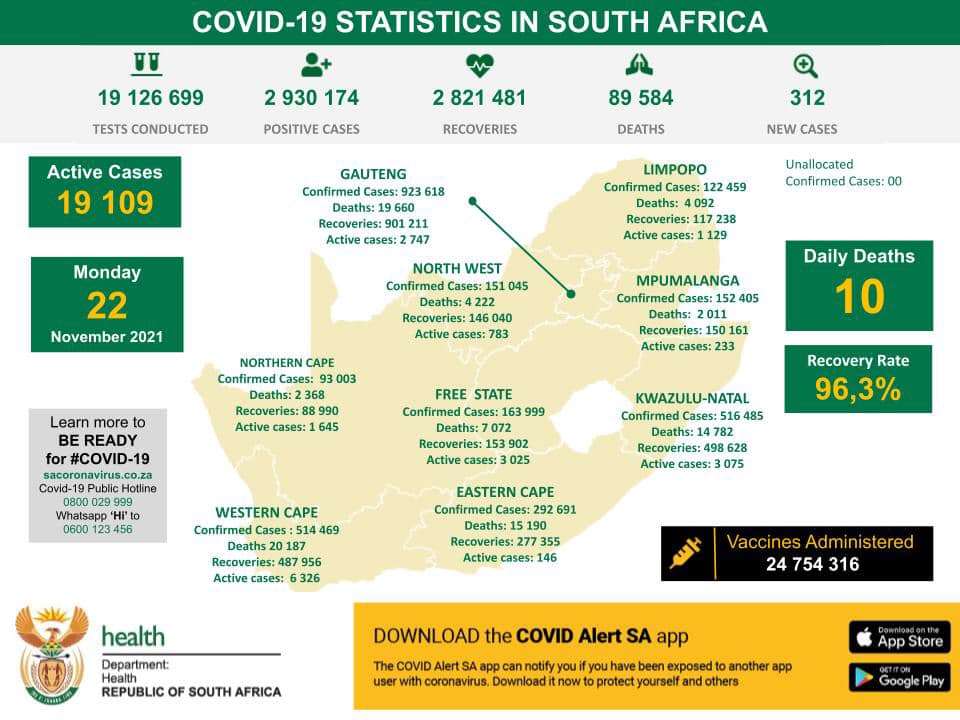 Schools in New Jersey are seeing an increase in Covid-19 cases in students and staff since the second week of November, according to Governor Phil Murphy and Health Commissioner Judy Persichilli.

This surge in cases comes as the statewide transmission rate increases to 1.23, signalling an outbreak. More than 87,000 children aged five through 11 are now vaccinated. In the last reporting period, schools reported 85.2% of staff were fully vaccinated, Persichilli said.

“We are concerned about cases in students and staff and among the general public increasing with gatherings for Thanksgiving and the upcoming holidays,” said Persichilli.

Idaho said it is winding down hospital care rationing rules, known as crisis standards of care, with the exception of its northern panhandle where anti-vaccine sentiment runs high.

“While the number of Covid-19 patients remains high and continues to stress healthcare systems, the surge is no longer exceeding the healthcare resources available except in north Idaho,” the Idaho Department of Health and Welfare said.

“For the rest of the state, healthcare systems are generally using contingency operations, which means they remain stressed with an unusually high number of patients,” the department said. “It will be some time before healthcare systems return to full normal operations.

New York City plans to be more aggressive in pushing vaccinations as the weather turns colder and people gather indoors.

New York City hospitalisations for Covid-19 haven’t seen the recent surges taking place in other parts of the state. The city’s seven-day average positive-test rate remained below 2% as of November 20, while the Finger Lakes and Western New York regions have rates of more than 8%.

More than 811,000 New Yorkers had received a booster as of Monday, a jump from over 630,000 a week ago, when the city opened up boosters to all adults a few days before the federal government backed an expansion of eligibility. About 15% of children aged five to 11 have received at least one dose of the vaccine; the rate is 75% for all New York residents.

Slovakia, a European Union member state, is mulling the possibility of declaring a three-week full lockdown, a move that would mirror steps taken by neighbouring Austria to curb the rise of coronavirus-related deaths and new infections.

Premier Eduard Heger is “intensively” considering this option for the country, which is currently among the most hit in new cases in the world on a per capita basis, his office said in an emailed statement on Monday.

Slovakia’s inoculation rate is below the EU average, driven partly by conflicting messages from politicians. Former premier Robert Fico has publicly decried the use of face masks and participated in protests against coronavirus-related measures last week.

Singapore reported a total of 1,461 new cases as of noon on Monday, compared with 1,670 cases the day before, according to the Ministry of Health. It was the fifth straight drop as the country moves to relax some restrictions. Singapore will allow five people from different households to sit together at restaurants as it also increases the limit on social gatherings to five people from two.

The European Union will this week discuss updating its digital Covid-19 certificates and its approach to travel within and outside the bloc as member nations take varying steps to counter the latest wave of the pandemic.

Booster shots will be a topic of conversation when European affairs ministers meet in Brussels on Tuesday, along with a debate over whether to change the length of time during which a vaccine certificate is valid, according to EU diplomats, who declined to be named on confidential preparations.

The ministers, who have the task of preparing the next EU leaders’ summit on December 16-17, will also discuss vaccine hesitancy, which has fuelled sometimes violent street protests in several member states in recent days, one of the diplomats said.

Germans are feverishly snapping up Covid-19 test kits at drug stores and pharmacies as the country buckles under soaring infection rates and the government tightens the rules to access shops, restaurants and gyms.

Home-use infection tests that provide a rapid read-out via a nasal swab were hard to get in recent days. Major drug stores like Dirk Rossmann GmbH and DM Drogerie Markt GmbH had temporarily sold out online, and many pharmacies said they’ve been overrun by unprecedented demand for the kits, which usually retail for as little as €1.50 each.

Chancellor Angela Merkel said the latest surge in Covid-19 infections is worse than anything Germany has experienced so far and called for tighter restrictions to help check the spread.

Merkel told officials from her CDU party on Monday that the situation is “highly dramatic” and warned that hospitals would soon be overwhelmed unless the fourth wave of the virus is broken, according to a person familiar with her remarks.

A longer-term review of trial data showed that the Pfizer-BioNTech Covid-19 shot remains highly safe and effective in adolescents aged 12 through 15, the companies said in a statement on Monday. They will use the updated data to seek full regulatory clearance for the vaccine in those ages in the US and elsewhere, according to the statement.

The updated analysis involves 2,228 trial participants, with data collected between November 2020 and September, the statement said. The results come amid heightened scrutiny over how often the shot – as well as another messenger-RNA vaccine from Moderna – lead to heart inflammation problems. These rare events are listed as potential side effects of both products.

Austria, which woke up on Monday to its fourth national lockdown since the start of the pandemic, is threatening fines of up to €3,600 for people who refuse shots once mandatory inoculations kick in next year.

The drastic measures are aimed at trying to curb a surge in infections that has left the government scrambling for solutions. Through mid-December, Austrians will only be allowed to leave home for work, essential shopping and exercise. Restrictions may last longer for the unvaccinated. The lockdown is meant to put a brake on infections before mandatory vaccinations kick in from February. That would be the first such policy in Europe, where governments have mostly kept inoculations voluntary.

Pockets of violence were seen across Europe over the weekend, from Belfast to Zagreb, in response to various anti-Covid measures taken by governments desperate to put the pandemic behind them. Police in Brussels turned water cannon on protesters to disperse an unruly crowd.

Thailand gets more doses from the US

The US donated one million Moderna vaccine shots to Thailand. The latest delivery comes on top of the 1.5 million doses donated to the Southeast Asian nation in July.

“While the first tranche of vaccines helped Thailand contain the Covid-19 outbreak, this second tranche will help Thailand reach its goal of vaccinating 70% of the population by January, paving the way for the country’s economic recovery,” Michael Heath, the US charge d’affaires to Thailand, said in a statement on Monday.

Iran’s daily deaths fell below 100 for the first time in more than seven months, the latest health ministry data showed.

The country reported 97 fatalities from the disease over the last 24 hours, the lowest since April 1. The number of cases rose by 5,427 to more than six million while the total death toll reached 129,053.

Denmark’s consumers turned pessimistic for the first time in seven months in November after the Nordic country reintroduced some restrictions to fight rising infections.

Daily infections are up by a factor of about 10 since the country, which has been among the most resilient to the pandemic, ended restrictions in September.

Kenya will require people seeking government services to be fully vaccinated against the coronavirus from December 21 as authorities move to increase inoculation before the year-end holiday season.

The government will restrict in-person services at the revenue, transport, ports, immigration and education agencies, Health Secretary Mutahi Kagwe said. The state will also limit access to hospitals, prisons, game parks as well as hotels, bars, restaurants and businesses that attend to 50 people or more in a day, Kagwe said. DM