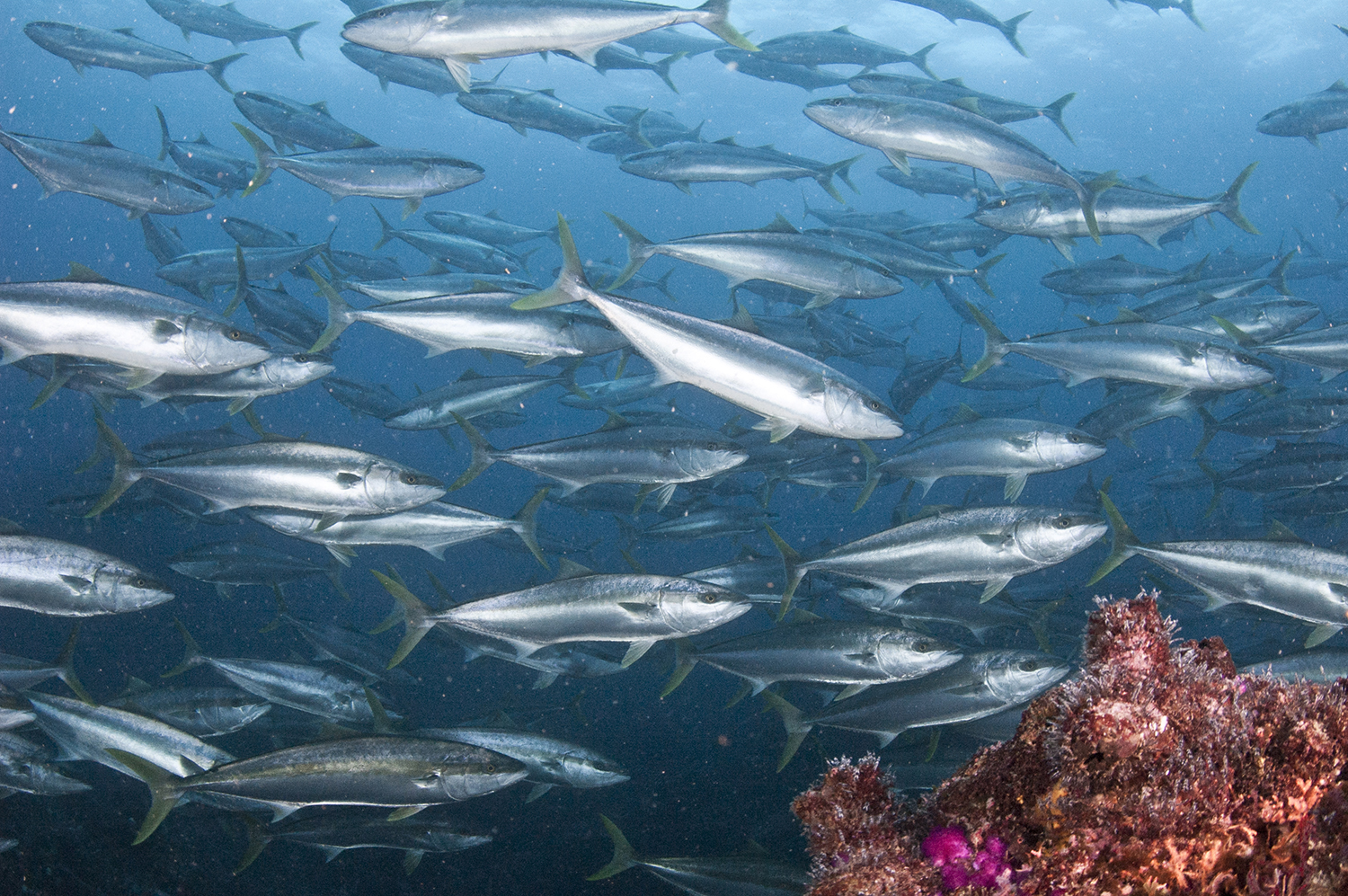 A school of yellowtail in the De Hoop Marine Protected Area in the Western Cape. (Photo: Steve Benjamin)

The country needs a new conservation movement in which its coastal and marine areas are governed, managed and conserved by custodian indigenous people and local communities.

Protected areas, according to the International Union for Conservation of Nature, are clearly defined geographical spaces set aside to conserve nature, ecosystem services and cultural values. They are important to reduce biodiversity loss and protect sources of food, clean water and medicines. They also offer protection from the impacts of natural disasters.

The recent Protected Planet 2020 report found a 42% increase in protected area coverage between 2010 and 2019. This includes a 68% increase in coastal and marine protected areas over the same decade. But the Living Planet Report 2020 shows that biodiversity is still being lost at alarming rates. It notes an average decrease of 68% in global population sizes of many species in the past 50 years. Not surprisingly, the same report states that “our relationship with nature is broken”.

The central challenge facing conservation is that it’s not only an ecological, but also a social issue. If the local context and priorities of those who most directly rely on natural resources for their survival aren’t considered, conservation efforts will continue to fail. Therefore, many have called for a new conservation movement which incorporates the interests and priorities of local and indigenous people. This is what the Post-2020 Global Biodiversity Framework recognises and strives for.

Recent research has emphasised the importance of community-conserved areas. These are protected areas governed, managed and conserved by custodian indigenous people and local communities. But so far, while about 8% of the global marine environment is currently protected, only 1% of these protected areas involve custodian indigenous people and local communities.

The barriers and enablers

In a recent paper, my colleagues and I explored what prevents and enables community protection of coastal and marine areas in South Africa. We reviewed global and South African literature to identify common factors in these types of initiatives. We then refined this list based on interviews with a variety of people involved in conservation in South Africa.

We found that local communities can conserve areas when:

* They have secure rights and decision-making power;

* The state provides technical and financial support; and

* There are streamlined processes to legally declare community-conserved areas.

The success of community-conserved areas requires self-motivated local champions who can get things done and get people involved. It also takes good communication. Initial and ongoing support from the state, non-governmental, private sector and civil society partners is essential, too.

A potential barrier to success is the relationship between communities and partners – especially the government. In South Africa, strained relations stem largely from the “people-free” conservation approaches taken during the colonial and apartheid regimes. Under apartheid, black people were denied access to and use of land and resources. Many communities were even evicted in the name of conservation.

Therefore, a key enabler will be improving community perceptions and support for conservation by providing redress for these communities. Also, where needed, cultural institutions must be revitalised. These include cultural rules and practices that regulate the use of natural resources, and respect for and effectiveness of traditional leaders to enforce this. If this is achieved, and communities can receive a source of income or livelihood from conserved areas, they are more likely to protect them. But it’s important to monitor initiatives to prevent the capture of benefits by a few local elites.

Reducing biodiversity loss and sustainably meeting the needs of people means having stronger enablers in place and reducing constraints. Conservation should empower communities to be valued and effective in decision-making and management activities.

Technical and financial support should be present from the outset. Madagascar, which has 178 locally managed marine areas, is a great example of what happens when local communities have recognition and power. Here conservation delivers both social and ecological benefits.

South Africa has the potential to do something similar to Madagascar. It has laws that recognise communities to establish and manage conservation areas. But the country is yet to declare a community-conserved area in the coastal and marine realm.

Our respondents highlighted a need for greater government support – most notably, a more streamlined approach to establishing these initiatives. It needs greater efficiency in concluding land claims and land-use plans. The government needs to recognise that local communities can contribute to both social and ecological objectives.

Other countries in the region have shown how conservation can be more inclusive. And a recent report found community-conserved areas useful in South Africa, especially in areas of high biodiversity.

Wayne Stanley Rice is an interdisciplinary conservation social scientist at the University of Cape Town.