Gqeberha follies: The absent councillor, the close vote and the dramatic collapse of coalition talks 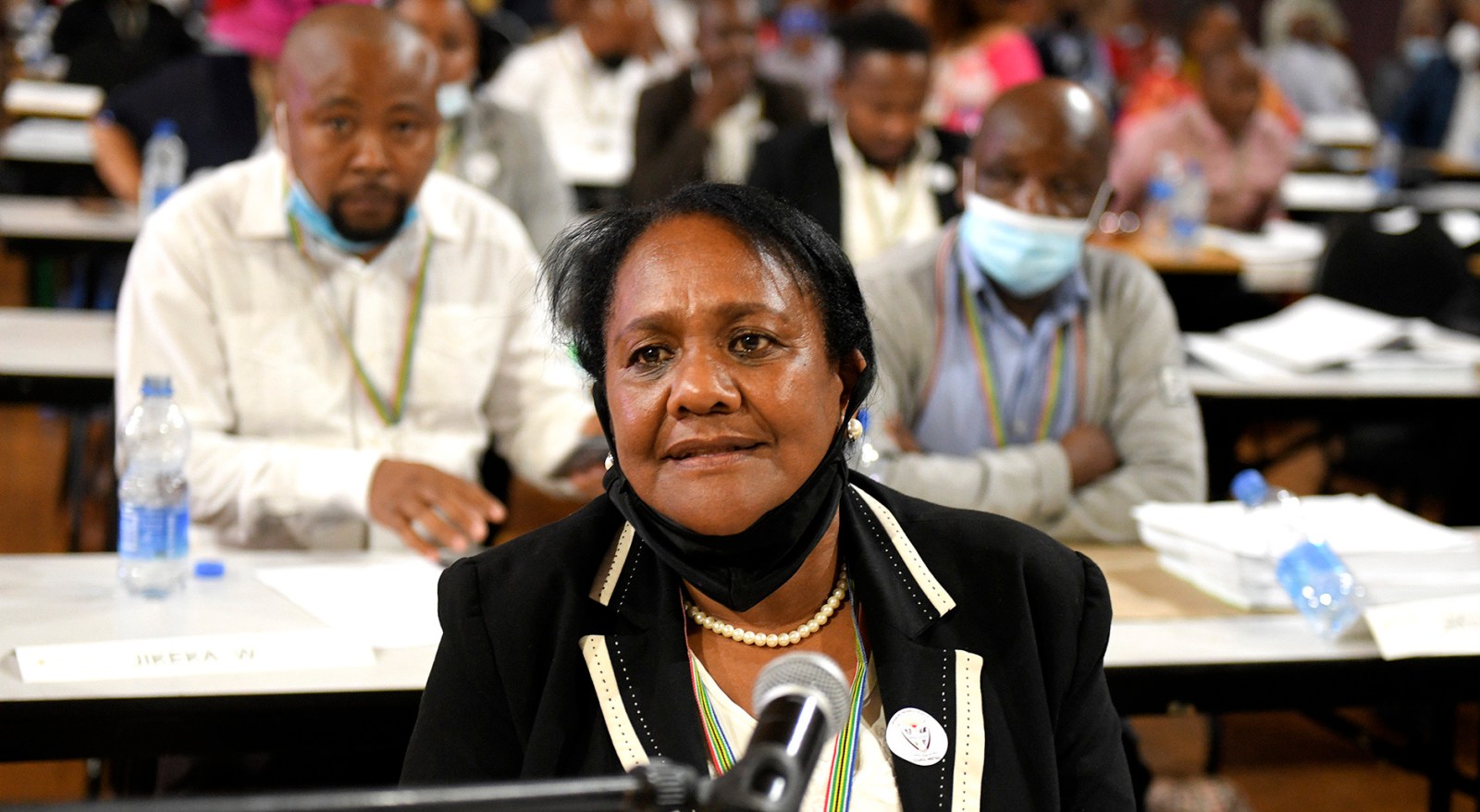 Eugené Johnson of the ANC has been elected as Executive Mayor of Nelson Mandela Bay Metro. (Photo: Supplied)

Somewhere between collapsing late-night talks and the absence of a DA councillor, amid the daunting prospects of a hung council, the ANC managed to scrape together a majority coalition for Nelson Mandela Bay, with the party’s Eugené Johnson becoming mayor of the metro.

On a dramatic day in the Nelson Mandela Bay council, the daunting prospect of a hung council was narrowly avoided, by a single vote, leading to an ANC mayor being elected for the city.

Eugené Johnson, who has decades of experience as an activist, has served on the National Economic Development and Labour Council of South Africa, the national executive of the South African Civic Organisation and is a director of Excelect.

Her most recent position was as a consultant on urban development and human settlements for the Swedish-funded NGO Ubutyebi Trust in Nelson Mandela Bay.

“Nothing is ever predictable in Nelson Mandela Bay politics,” an insider in the metro’s turbulent political setup said.

Last week it had appeared that the DA was ready to form a coalition government, but the inaugural council meeting was postponed by the MEC for Cooperative Governance and Traditional Affairs, Xolile Nqatha, after he raised his concern that the contract for the acting city manager, Anele Qaba, had not been extended properly, making him unable to call the first council meeting.

On Monday, a director in the Department of Cooperative Governance and Traditional Affairs, Charity Sihuno, presided over the election of a Speaker.

Over the weekend a number of parties that held a combined 10 seats joined the ANC in a coalition government. These parties are Good, the African Integrity Movement, the United Democratic Movement, the Defenders of the People, the Northern Alliance and the Pan Africanist Congress.

The bloc combined its 10 seats in the council with the ANC’s 48.

The Patriotic Alliance has two seats and has partnered with the ANC nationally.

The president of the Northern Alliance, Gary van Niekerk, was elected Speaker by a single vote and then presided over the election of Johnson as mayor — by a single vote — and other elected positions. The DA did not nominate any further candidates.

It is understood that the DA was confident of forming a coalition government until Sunday, when “talks collapsed” with all other parties except for the Freedom Front Plus and the African Christian Democratic Party — mainly due to a long list of demands that the party found itself unable to meet, including an insistence by smaller parties that they took control of service delivery portfolios including public health, finance and infrastructure.

“We didn’t have the numbers to form a stable majority coalition,” said DA leader Nqaba Bhanga. “A minority coalition was never an option. It is just not sustainable.”

The numbers in the metro are perilously close, with the ANC and its partners holding 60 votes and the DA and its remaining partners holding 60, but on Monday Retief Odendaal, a serving member of the provincial legislature who was on the provisional councillor list as he was to take up the portfolio of city finances if the DA formed a government, declined the position of councillor.

Bhanga said he took the decision not to ask Retief to resign from the legislature.

Bhanga said they received advice that Odendaal had to be sworn in as a councillor before he resigned and as such he was considered absent on Monday.

“We could have hung the council, but it would have been devastating for the city,” Bhanga said. “It would mean that there would be no ward councillors, no political leadership for months and we are running out of water.”

It is understood that a rerun of the local elections in the metro would have taken up to six months.

Bhanga said if the DA had retained power, he would have wanted Odendaal to serve as the mayoral committee member for finance as he had vast experience in local government

“We did receive advice from the Electoral Commission that they could not declare a vacancy before the councillors were sworn in,” he said.

“It was clear that we were not going to win this round. The smaller parties wanted all the key positions. They even wanted finance — and proposed a person who had no background in it.

“It is a democratic process. These positions belong to the people. Now a government has been elected. It is now up to them to deliver services — and nothing else. That is the expectation from the people.

“We didn’t want a government at all cost that would have collapsed the city. My conscience is clear. I was not going to watch the city collapse under my hand.”

In her inaugural speech, Johnson said one of her main focus areas was the creation of an environment conducive to economic development, support for SMMEs and the creation of jobs.

“The main catalyst to economic development is to make sure that the lights are on, there is running water, and the city is clean and safe. If we master this, we would have done a bigger part of our work. Critical to economic development is rooting out corruption and all its manifestations. The biggest challenge we are facing is unemployment, we need to deal with it,” Johnson said.

She pledged to create an environment that would lead to more jobs, especially for young people, women and the “special sector” through the city’s Economic Development Directorate.

Johnson flagged the water crisis as an emergency facing the city and its potential to grow economically.

“At the current water levels, we need to drastically decrease water consumption. On our side as the city, we must move fast to fix water leaks and save every drop. We need to keep water coming from our taps and support our industry.”

She skirted around the failures by the Amatola Water Board to keep the Nooitgedacht Phase Three project — which could provide lifesaving water to a metro that is projected to run dry in the next few months unless there is significant rainfall — instead blaming the drought. Before vacating his office Bhanga had declared a dispute with the national government over this issue.

She also expressed her concern at the levels of crime in Nelson Mandela Bay.

“We need to work with the law enforcement agencies and the people of this metro to create a safe city for our children and the already stressed economy. We must do it for the future of this city.”

Other members of the mayoral committee are:

Infrastructure and Engineering will be headed by Stag Mitchell from the Northern Alliance; Thukela Zumani from the Defenders of the People will head the Treasury; Safety and Security will be led by Lawrence Troon from Good; Electricity and Energy will be headed by the United Democratic Movement’s Luxolo Namette; Public Health by Thsonono Buyeye from the African Independent Congress; and Sport and Recreation by Basi Kamana from the PAC.

Roads and Transport will be headed by Bongani Mani; Corporate Services by Makhi Feni; and Human Settlements by Itumelang Ranyele, all from the ANC.

“As this collective of capable persons, we need to hit the ground running. There is no time to rest; our people expect an uninterrupted service delivery,” Johnson said.

Former Nelson Mandela Bay Speaker Buyelwa Mafaya, from the ANC, was elected as the deputy mayor.

Speaker Gary van Niekerk said he wanted to thank everyone who voted for him. “For those who have not voted for me, I will be your Speaker as well.”

Quoting from Proverbs in the Bible, Van Niekerk said:  “Speak for the people who have no voice, for the rights of all who are down and out. Speak out for justice. Stand up for the poor and the destitute.

“Let us remember that, councillors, today and going forward over the next five years.”

Julie Stanworth, a spokesperson for the Electoral Commission, explained why it was not possible to automatically replace Odendaal with the next person on the party’s proportional list.

“He needed to be a councillor officially before he could vacate a seat. He cannot vacate something that he has not occupied,” she said. DM/MC