Austria back in lockdown ahead of mandatory vaccine pol...

Austria back in lockdown ahead of mandatory vaccine policy

Austria back in lockdown ahead of mandatory vaccine policy

(Bloomberg) --Austria awoke on Monday to its fourth national lockdown since the start of the pandemic.

Through mid-December, Austrians will only be allowed to leave home for work, essential shopping and exercise, measures intended to put a brake on infections that have quadrupled in a month. Restrictions may last longer for the unvaccinated.

The Central European nation is also about to become a testing ground for overcoming vaccine skeptics, with mandatory vaccinations due to kick in from February. That would be the first such policy by a country in Europe.

As part of the lockdown, restaurants and most shops will be shut, along with the traditional Christmas markets. Museums, gyms, symphony halls and operas closed as of Sunday night. Grocery and some food stores will remain open.

Locals scurried to work Monday morning in the streets around St. Stephen’s Cathedral in Vienna. The masses of tourists that had recently returned to the capital were almost completely absent, highlighting the measure’s impact on the key tourism industry.

Once the vaccine mandate is implemented, fines could reach 3,600 euros ($4,060), and 1,500 euros in the case of booster shots, according to Minister for the Constitution Karoline Edtstadler. Authorities will only impose the penalty if an offer for a vaccine appointment is rejected.

The government’s moves sparked furious protests in Vienna, where an estimated 40,000 people, led by the right-wing Freedom Party, took to the streets on Saturday. Banners and placards demanded “Freedom” and “Hands off our children.”

Another protest in Linz — the capital of Upper Austria, which along with Salzburg currently has the highest seven-day Covid rate in Europe — drew thousands more on Sunday. 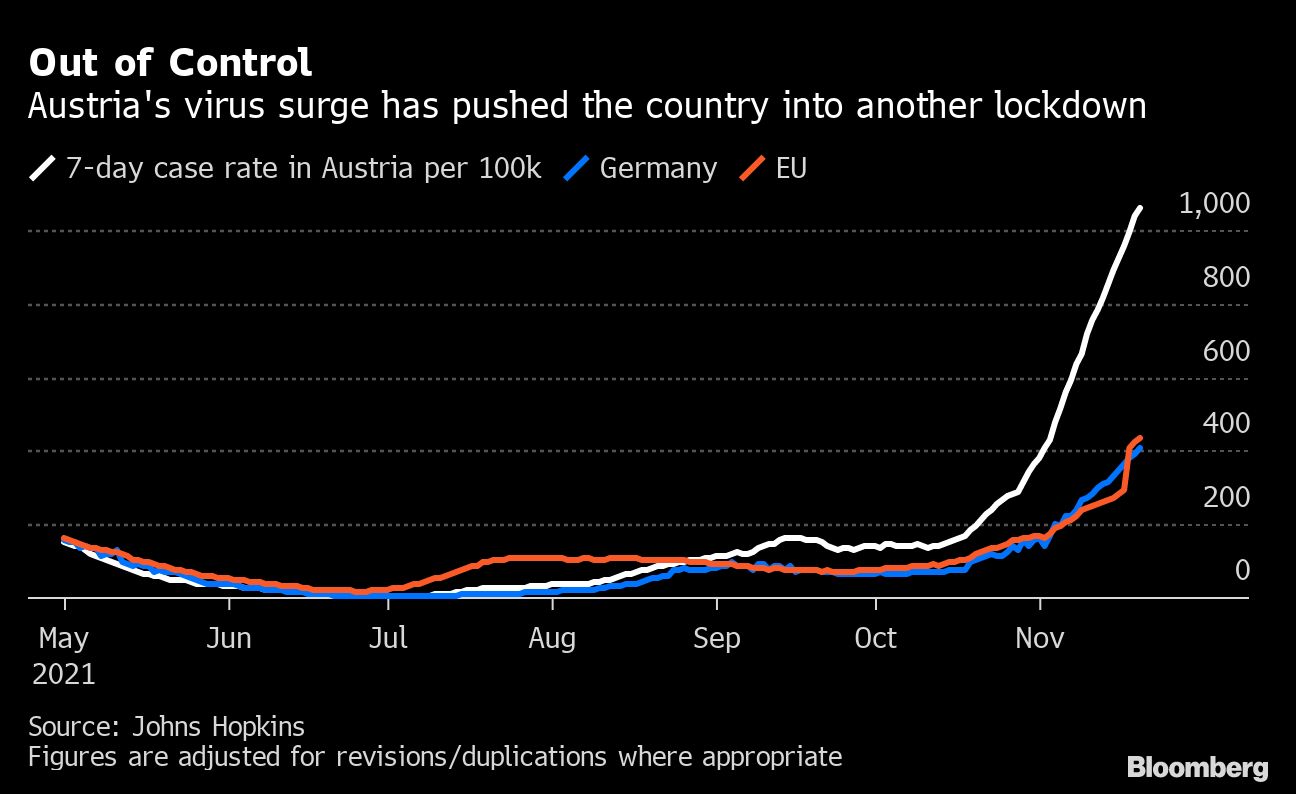 Pockets of violence were seen across Europe over the weekend, from Belfast to Zagreb, in response to various anti-Covid measures taken by governments desperate to put the pandemic behind them. Police in Brussels turned water cannon on protesters to disperse an unruly crowd.

Austria’s vaccine program stalled after a fast start in the spring. Short of 66% of people are fully inoculated, among the lowest rates in Western Europe.

“When people in a free and pluralistic society continuously ignore responsibility, it needs to become an obligation,” Chancellor Alexander Schallenberg said in an interview with the Kurier newspaper published on Sunday.

Chancellor for less than two months, Schallenberg faces multiple difficulties in persuading vaccine skeptics and eventually navigating the country of about 9 million out of the pandemic.

More may soon side with the Freedom Party and the recently-formed virus-skeptic MFG group, which is looking to capitalize on protest sentiment.

The other challenge is political.

While most parties have united behind the government’s policy, Schallenberg is largely untested after being propelled to the top job while his predecessor and influential People’s Party leader Sebastian Kurz tries to rid himself of corruption charges.

A governing coalition with the Green Party is as fragile as ever, and the lockdown represents a hard U-turn for a government that had declared the pandemic all but over. The largest opposition group, the Social Democratic Party, has edged ahead in some polls.

Austria may provide a blueprint for countries to its east where vaccination rates are even lower and virus deaths have been surging. But it will also be an example of the risks of doing crisis management too late, said Thomas Hofer, a political analyst and consultant in Vienna.

“Leadership and Austrian politics don’t wash well together,” Hofer said by phone. “They didn’t do it in a moment of strength but in a position of real weakness.”