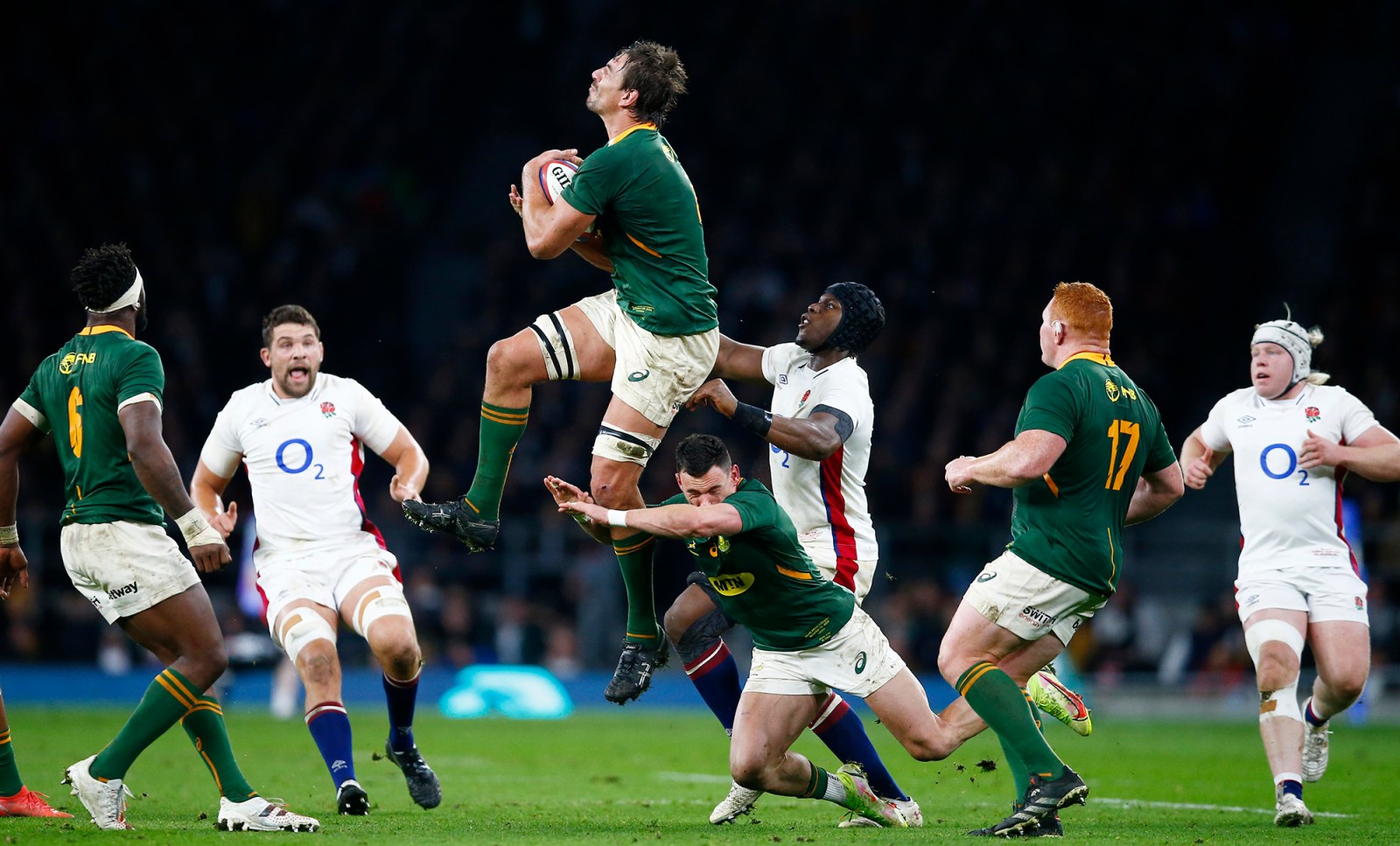 Ending the season as the top-ranked team in the world is a considerable achievement, but the Springboks feel they should have done better during a tough 2021 season.

There will be some satisfaction in ending the 2021 season as the world’s top-ranked team, but Springbok coach Jacques Nienaber knows that 2022 is going to be a crucial year in solving some personnel issues and evolving tactics for an assault on Rugby World Cup 2023.

The Boks’ last-minute 27-26 loss to England at Twickenham on Saturday was a disappointing way to end an incredibly tough year, which involved a total of 18 weeks in biosecure environments for the squad and the attendant stresses and claustrophobia that lifestyle manifests.

Defeat to Marcus Smith’s 80th-minute penalty was the third time this season the world champions have lost a Test with virtually the final kick of the contest.

The season’s record reads: played 13, won eight, lost five. It could easily have read won 11, lost two with a bit more luck. But the Boks also won two matches – the deciding third Test against the British & Irish Lions and the second meeting against the All Blacks at Gold Coast with the final penalties of the contest.

In terms of winning percentage, the season could have been much better, but it could have been much worse too. As it was, it was still a very good year. The major priority in 2021 was firstly staging the Lions series amid the peak of the Delta variant Covid-19 wave, and then winning it.

They passed on both counts, and an away victory over the All Blacks added some gloss. Retaining the No 1 ranking, thanks to New Zealand’s 40-25 loss against France at the weekend, was probably the least the Boks deserved in such a tough year.

The Boks certainly have the power to unsettle any side and that is a platform they can build just about any house on. The pack, and the players off the bench are formidable in the set piece and on defence. When you consider Pieter-Steph du Toit missed the bulk of the season and RG Snyman didn’t feature at all, there is still a lot more to come from these Boks.

But they need to address attacking shortcomings and depth issues at flyhalf, centre and scrumhalf with a view to Rugby World Cup 2023.

“That’s the third time this year that we have lost the game when we’ve been leading by one or two points at 78 minutes, so it’s very disappointing,” Nienaber said after the match.

“It’s something that we’ll have to look at and improve on.

“I told the team in the change room afterwards that they’re better than our winning percentage this season [62%], which is skewed by the loss of those close games.

“This year was one where we always knew that we’d be finding out where we were after missing out on 2020.

“I think we can definitely improve and we’re not where we want to be. I don’t want to go into detail but there are things that we want to work on – our execution of opportunities can be better for one.”

England scored three tries to the one of the Boks and all of them were well executed plans that beat the Boks’ vaunted “press” or rush defence.

After being rocked back by two clever England first-half tries, from centre Manu Tuilagi and fullback Freddie Steward, that came from creating acres of space out wide through clever running lines and accurate passing from Marcus Smith and Henry Slade, the Boks were on the back foot.

“We usually only concede an average of one try per match so conceding three doesn’t sit well with us,” Nienaber said.

“They played well and made it a proper Test match for their home crowd, but it is very painful to have lost at the death once more.”

Those tries gave the home side a 17-12 halftime lead, but the Boks roared back into the contest by completely dismantling the England pack after the break.

The power of the Bok eight saw their scrum and breakdown win numerous penalties and their maul keep England’s eight in reverse. It was a game Nienaber will ponder deep into the night about how they lost after such a brutal forward display.

The Boks edged ahead late in the game and were in total control. But the problem with being in control of the momentum of the game, but not fully in control of the scoreboard, is that the dominance is fragile. The Boks worked hard to sneak ahead, but they missed chances to break the game open and put England away.

And while the home team were in touch with the Boks on the scoreboard, they retained belief, even as they were shoved backwards at yet another scrum. Eventually that grim determination to keep the scores tight paid off. And once again, the game came down to tiny margins.

Captain Siya Kolisi’s late yellow card for mistiming a leap in a contest for the ball, was decisive. It was a case of missing his jump by half a second. Had he been slower, he might have checked his run and made a legal tackle.

As it was, Kolisi fell a fraction of a second into that grey area and leapt for the ball from a poor position and clumsily clattered into wing Joe Marchant to concede the penalty.

From the ensuing kick to touch and lineout, England inevitably moved the ball through several phases before winning another penalty right in front of the posts, giving Smith the chance to secure victory, which he took with composure.

It was a bitter way to end a tough year for the Boks, but it’s how they internalise and return from these setbacks that will determine if these close defeats have been in vain, or ultimately, have they been invaluable in their progression and development as a team?

“Results-wise, we’re not happy or proud because I believe this team can achieve so much more and we hold high standards for ourselves,” Kolisi said after the match.

“But I think effort-wise and mentally, this team really is strong. To go through what we went through and still be able to pitch up, and I don’t think our intensity has slacked off in any way, I’m proud of that.

“In so many ways it was a successful year, but our sport is all about results and we will work hard on that come next year. There are no excuses about being in isolation or whatever .… we don’t make excuses. No matter what we went through, we’re still not happy with where we are.

“We know where we are and we know we can improve. The number of games we have lost by one or two points is really tough, but hopefully when we come back we know exactly what to work on and what to fix.”

It’s been a good November for the northern hemisphere teams with none of the best from the south able to go undefeated on tour. The Wallabies lost twice and so did the All Blacks while the Boks stumbled once.

The Wallabies also lost 29-28 to Wales in Cardiff to end a miserable weekend for the three southern hemisphere giants.

After the All Blacks’ 29-20 loss to Ireland a week earlier and the Wallabies’ 32-15 defeat against England last week, it is a clear sign that the difference between the top six teams in the world is marginal.

But Saturday’s string of results was significant because the last time the three southern hemisphere giants were all defeated by northern hemisphere opposition on the same weekend, was 19 years ago, on 9 November 2002.

On that particular Saturday, the All Blacks went down 31-28 to England in London, the Boks lost 30-10 to France in Marseille and the Wallabies were beaten 18-9 by Ireland in Dublin.

The fact the margins have been so tight between the teams is a good sign that RWC 2023 will be less predictable. It also underlines that the Boks’ series win over the Lions was a massive result considering the collective strength of northern hemisphere rugby at the moment.

And in a broader context, it adds value to SA Rugby’s decision to move its best provincial team into northern hemisphere club competitions. The standard is as good, if not better, than anything they will encounter in the south. DM