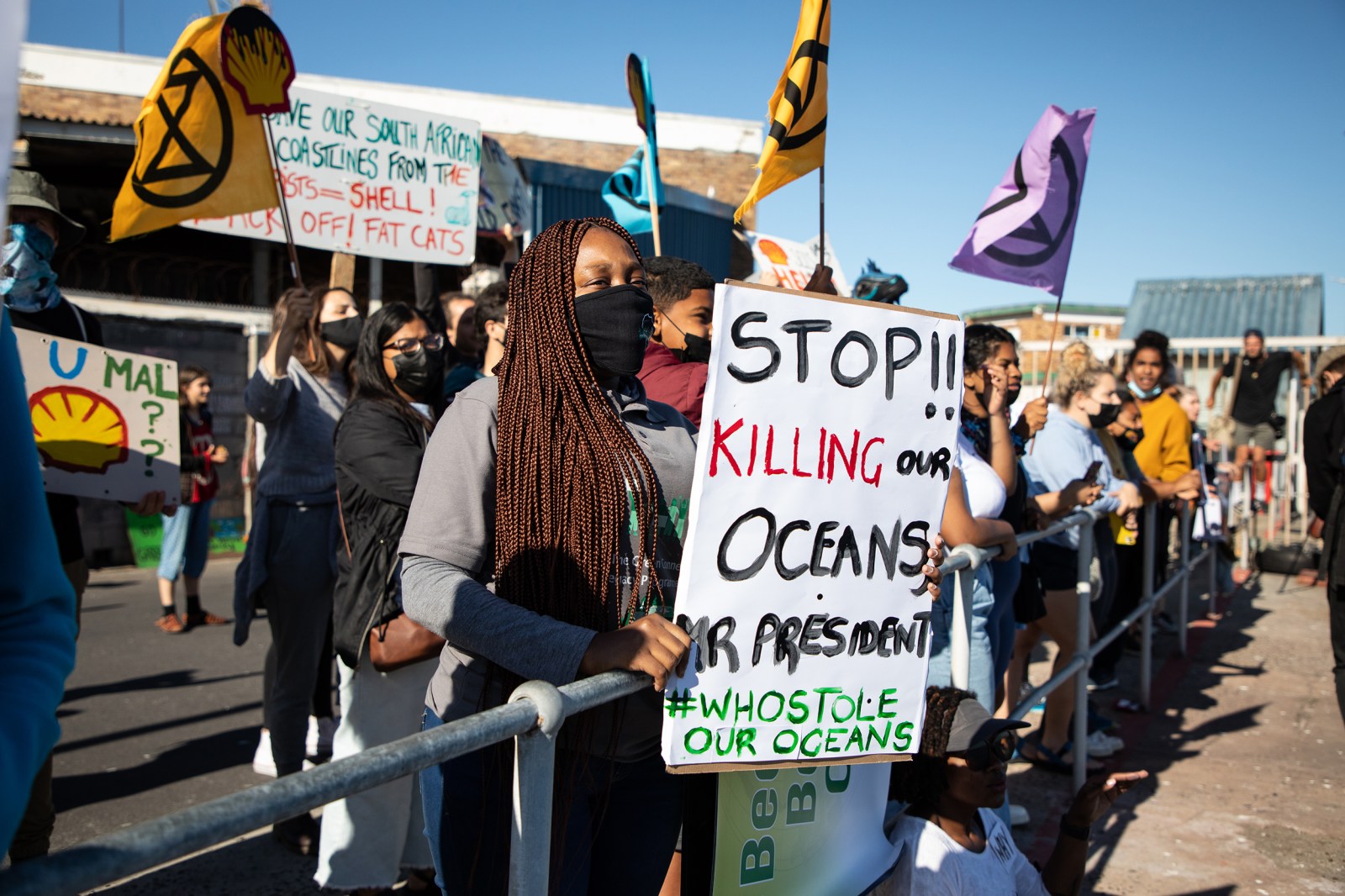 Activists protest against Shell’s offshore exploration plan off the Wild Coast and the arrival of the Amazon Warrior at the Waterfront in Cape Town on Sunday, 21 November 2021. (Photo: Victoria O’Regan)

‘Hell no, Shell must go’ — activists protest against the arrival of the Amazon Warrior in Cape Town on Sunday. This is the ship’s last stop before it carries out a seismic assessment in search of oil and gas off the Wild Coast, starting on 1 December.

Waving banners, beating drums and chanting, an array of protesters — including members of Extinction Rebellion Cape Town, Oceans Not Oil and the Green Connection — awaited the arrival of the Amazon Warrior, a 130-metre seismic blasting vessel hired by oil giant Shell, at Cape Town Harbour on Sunday morning. From the outset, their message was clear: “Shell can go to hell”.

“Hell no, Shell must go!” the protesters chanted. Placards with defaced Shell logos on them bobbed above the crowd.

Shell has appointed Shearwater GeoServices to conduct the survey, which will last from four to five months, and cover more than 6,000km² of ocean surface. The survey area is located more than 20km from the coast, with its closest point in water depths ranging between 700m and 3km, Daily Maverick reported.

During this time, the seismic airgun blasts will increase the cacophony of sounds in the ocean, adding to those made by whales, dolphins and other marine life. Scientists and environmentalists alike have raised serious concerns about the “disastrous effects” of seismic assessments on the marine environment.

Climate activist organisation Extinction Rebellion (XR) Cape Town has said that there is increasing evidence that seismic blasting harms marine life. “Environmentalists are extremely concerned that seismic blasting of this scale will hurt our whales during breeding seasons, possibly separating mothers from their calves. But also fishing communities are sounding the alarm since the shockwaves will also scare off and harm their catch for unknown periods,” said XR Cape Town press coordinator, Michael Wolf.

In a statement on Saturday, XR Cape Town demanded that President Cyril Ramaphosa urgently intervene and withdraw the exploration licence from Shell and its partners, and send the Amazon Warrior home.

Shell’s announcement has spurred widespread public outrage and ignited a petition campaign to stop the survey.

The Oceans Not Oil coalition started a petition calling on Environment, Forestry and Fisheries Minister Barbara Creecy to withdraw approval of Shell’s application to probe for oil and gas off the Eastern Cape shoreline. By Sunday morning, the petition had received more than 147,500 signatories.

About 100-150 protesters and activists were at the Clock Tower at the V&A Waterfront when Daily Maverick arrived at around 5.30am on Sunday. From there, the demonstrators marched through the Silo District, eventually arriving at the edge of a pier near Shimmy Beach Club.

For about three hours the protesters waited to “unwelcome” the Amazon Warrior to Cape Town. The ship eventually arrived in the bay at about 8.15am, but remained outside the harbour.

“The reason why we’re here today is because we’re telling Shell to go to hell. We do not approve of their want to do seismic activity across the Wild Coast because it will not only affect marine life but will affect individuals and marginalised communities,” protester and youth coordinator at the African Climate Alliance, Gabriel Klaasen, told Our Burning Planet.

Klaasen said Shell’s plans for the Wild Coast will not only affect marine life, but will have social and economic impacts on communities in the area.

“This needs to come to an end if we want to make sure our marine life is secure for future generations to benefit from. The ocean is one of the biggest carbon sinks in the world and if we don’t protect it, we are screwing humans over,” he said.

Addressing protesters on Sunday, strategic lead for the Green Connection organisation Liz McDaid said that while there are currently groups of environmental lawyers trying to find ways to stop the project, public pressure on Shell is the way forward.

“It’s us on the ground who have the best chance of public pressure building to stop them and to shut them down,” said McDaid.

McDaid said Sunday’s action was the first in a series of rolling actions planned before 1 December. There have been protests along the Wild Coast and pickets outside Shell petrol stations across the country, she said.

A silent march from Muizenberg to Kalk Bay harbour to raise public awareness also took place at midday on Sunday.

“What we are also planning to do — if we can raise the money — is hire a research vessel to shadow and monitor” the Amazon Warrior’s activity on the Wild Coast, said McDaid.

“What we also think will put public pressure on Shell is to call on all the holidaymakers who are driving around to boycott Shell,” she said.

“We were at the Paradise Motors Shell garage yesterday and it was very inspiring to see people look at the posters, drive in and then drive out without getting petrol,” she said.

“As long as we can resist and they know we are resisting, it makes their lives harder.” DM/OBP