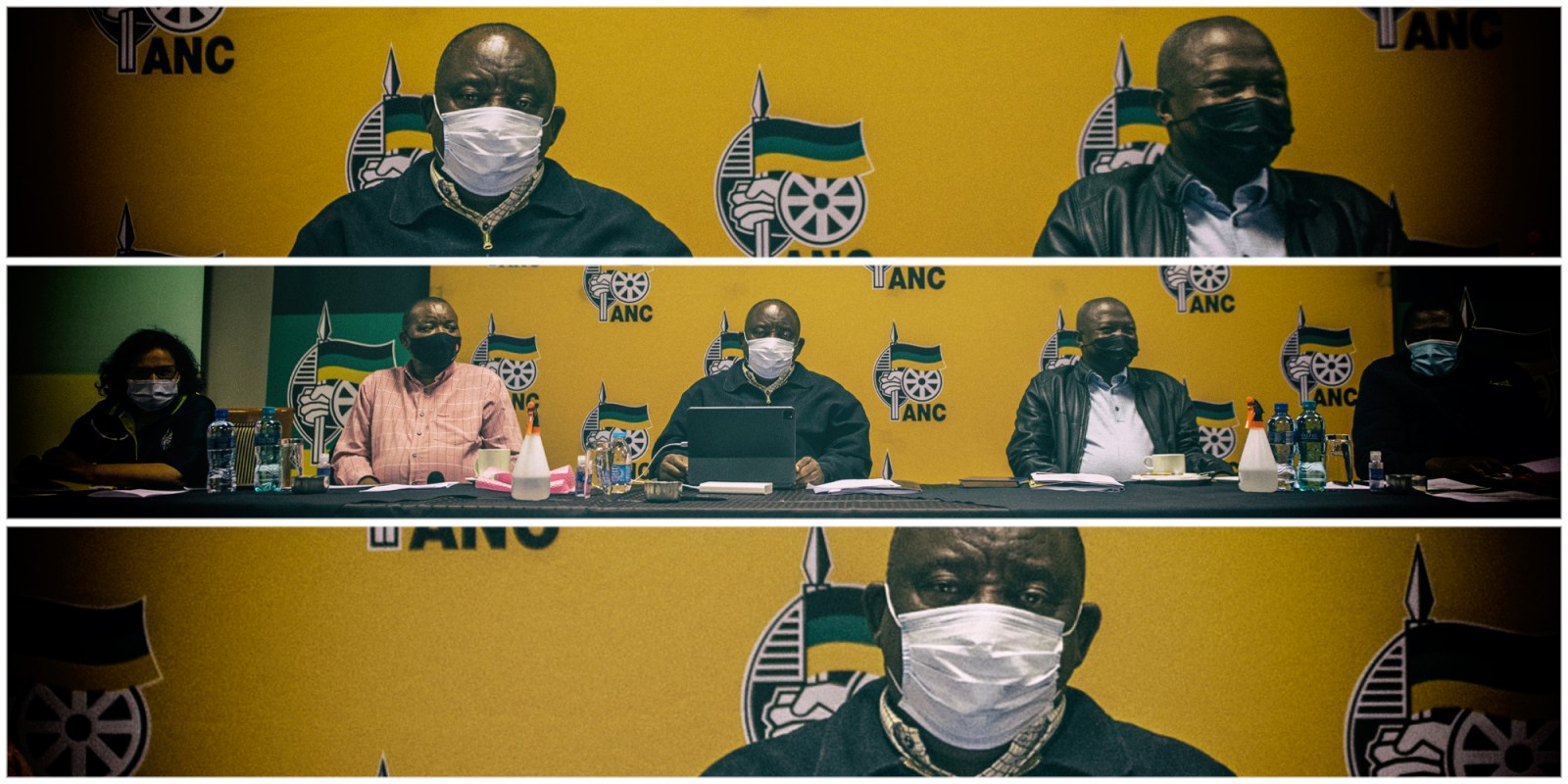 President Cyril Ramaphosa during a photo opportunity for The African National Congress special meeting of its National Executive Committee at the St George’s Hotel in Irene, Tshwane, on Sunday, 21 November 2021. (Photo: Alet Pretorius)

Failure late last week by opposition parties to form coalitions that could oust the ANC presents a chance for the governing party to form minority governments in Johannesburg, Ekurhuleni and Nelson Mandela Bay, and also to take Tshwane.

The ANC’s National Executive Committee (NEC) has resolved to set up a “political management committee” to deal with issues that might arise in hung councils where parties have not managed to negotiate majority coalitions.

It also nominated mayors for all the metros except Cape Town, where the DA has an outright majority.

Failure late last week by opposition parties to form coalitions that could oust the ANC now presents a chance for the governing party — despite a bad electoral performance on 1 November — to form minority governments in Johannesburg, Ekurhuleni and Nelson Mandela Bay, and also to take Tshwane.

While the DA and ActionSA said they wouldn’t work with the ANC, the ANC has in turn refused to work with the EFF, which has put forward demands related to the nationalisation of the Reserve Bank and of land in exchange for its support in councils.

President Cyril Ramaphosa’s lobby in the ANC would find these demands difficult to yield to, as they are similar in many respects to the demands of the anti-Ramaphosa faction in the party which were rejected by just over half the delegates at the party’s 2017 national conference at Nasrec.

The ANC’s statement made no mention of the next steps the party would take in the Kannaland Local Municipality, where convicted child rapist Jeffrey Donson from Icosa was voted mayor with the ANC’s help. It is possible that this is one of the issues that will be delegated to the political management committee to decide on.

Following “a rigorous screening process and interviews by the ANC national officials” of close to 600 candidates for 206 councils, the party nominated incumbents Mpho Moerane in Johannesburg, Mzwandile Masina in Ekurhuleni, Xola Pakati in Buffalo City, and Mxolisi Kaunda in eThekwini, the statement read.

Johnson is the only female on the ANC’s list for metros. At least one of the three names set forward as possible candidates in each municipality should be a woman’s. Forty-six percent of the ANC’s mayoral candidates are women.

The ANC’s NEC, which met at the St George’s Hotel in Irene, invited both its alliance partners, the South African Communist Party and trade union federation Cosatu to the meeting. Among the “comprehensive criteria” adopted by the meeting for its mayors, speakers, and other political office-bearers are that they should understand municipal finances, administration, the regulatory environment of local government, and have an ability to unite, steer and inspire the leadership of the municipality and serve communities.

“Above all, the ANC expects our deployees to be leaders in good standing: honest, people with integrity and high ethical standards, no criminal record, no pending corruption charges, and they must be rooted and grounded in the community where they reside,” the statement read.

The 26 interview panels which made the decisions consisted of ANC national officials, NEC members and members from alliance partners and leagues and “other ANC cadres with experience in local government and development”.

The statement made no mention of the party’s failure to pay staff salaries due to being out of pocket. Several staff members, including NEC members Nomvula Mokonyane and ANC Women’s League President Bathabile Dlamini, picketed outside the meeting to draw attention to their plight.

ANC spokesperson Pule Mabe, who wore the hats both of unpaid ANC staffer and NEC member, said the party would meet disgruntled staff members about the matter on Tuesday.

The ANC and the DA seem to be taking a longer view on their coalition decisions this year after some bad decisions five years ago led to a loss of support at the ballot box. Instead of concentrating only on what a fractured voting base wanted in the 1 November elections — mindful that more than half of them didn’t bother to turn out to vote any way — parties are looking ahead to the 2024 general elections.

The DA’s Federal Council Chairperson, Helen Zille, for example, in a Facebook retort on Sunday morning to a complaint by ActionSA’s Herman Mashaba that he felt “double-crossed” by the DA, said the party did not seek to repeat its “disastrous failures of 2016” when it relied on the EFF’s support to stay in power.

“Our experience of this arrangement was that the coalition became beholden to the EFF and betrayed the voters,” she said.

Mashaba, whose ActionSA is a potential kingmaker in the Johannesburg and Tshwane metros, had hoped to become mayor in Johannesburg in exchange for his party’s support for a DA mayor in Tshwane.

Zille said in her Facebook post that the EFF’s strategy was to get a mayor in Johannesburg who is “beholden to them” and “will do their bidding”. This would place the party in a good position to say who should get certain administrative positions, which, in turn, would put the EFF in a position to have a say about tenders and contracts even while it was sitting in the opposition benches.

This is somewhat different from the DA’s coalition aims in 2016 when it was keen to replicate its 2006 Cape Town successes by getting into government to demonstrate what it was capable of doing.

This strategy didn’t work so well in the unstable coalitions in Johannesburg and Tshwane, where the party worked with the EFF and where it was punished in the end for actual governance failures, possibly even more than it was punished for its confused stance on race.

Tuesday is the deadline for councils to convene meetings and elect mayors and office-bearers. Failure to do so might lead to election reruns in these municipalities. DM