This week we’re listening to:  A love letter to the streets of Los Angeles 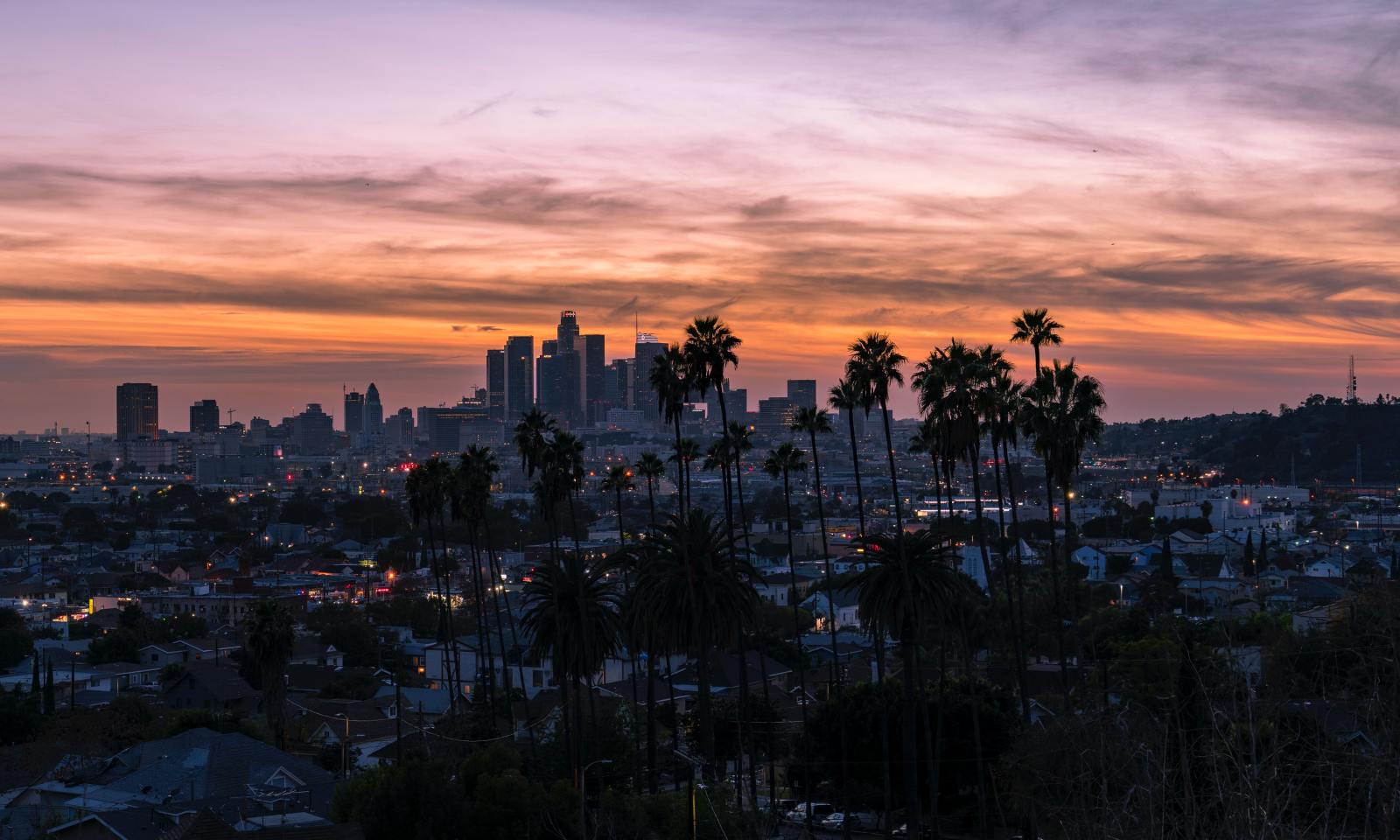 Walter Thompson-Hernández’s podcast ‘California Love’ embraces the complexities of community, identity and family while serving as a living history of Los Angeles from the eyes of those who grew up on its streets.

New York Times writer and author Walter Thompson-Hernández is a masterful storyteller and multimedia journalist, and for California Love he has moved into the podcast space with enchanting ease.

His photography is vibrant and rich with heart — there is no doubt he is practised at telling visual stories — but to translate the visual into audio is no simple feat. Yet California Love is just as vibrant, the sound waves alive with echoes of bustling streets, footsteps and horseshoes on pavements, and the cries of birds overhead.

In California Love, Thompson-Hernández brings the listener along as he returns to Los Angeles after years of living and working away, walking down the streets he grew up on that are brimming with memory.

“As I grew, and changed, LA, I heard, was also changing. Friends were being forced out of homes that they had lived in for years… The places that I grew up loving were all closing down,” he says.

His story is deeply personal, yet intertwined with so many others. As he recalls his own childhood in Los Angeles, he speaks with people he grew up with, letting their stories and experiences settle within the narrative. There is a feeling of community in these reflections, paying homage to how other people shape and mould one life while situated within the realities of growing up in Los Angeles. Thompson-Hernández’s one voice is amplified in these stories, but it is also one voice of many — something that he leans into as he draws on the power of community to reflect on his own past.

Describing himself as a “Blaxican”, the son of a Mexican mother and a Black American father, Thompson-Hernández pieces together the complexities of identity, using his own background to comment on issues like race, migration and family.

As he laments to Los Angeles:

“You’re really flawed. You’re not a perfect city. There’s so many things that you have to work on. Like how you treat your homeless. Access to public transportation. Providing more affordable housing. How we treat people of color in this city.”

And Thompson-Hernández tackles these issues by setting his own personal views against the backdrop of broader events, showing how the decisions of politicians and authorities directly impact ordinary Americans. The policies are no longer vague and separate, and he wants to show how you cannot look at politics from a distance, the consequences are real and shape people’s lives.

The first episode tells the story of graffiti in Los Angeles, and the experiences that were mixed into the paint of its artists.

Artists like Sight, a local graffiti “legend” who Thompson-Hernández tagged with.

“I existed when I did graffiti. I existed, and that’s why I started doing it, that sense of awakening, rebirth,” Sight explains.

“Graffiti was a lot of things for me. It was an outlet — a way for me to take out the rage, pain, and the hurt I was experiencing at home. The streets and walls, they were basically my therapy,” Thompson-Hernández echoes.

“Joe was definitely a villain. It felt like he was our villain.”

But when Thompson-Hernández sat down with Connolly, he told a different story.

Connolly says he scrubbed out graffiti to give artists a fresh space, a clean canvas, to work on.

“Graffiti has to start with all these tags, and then it moves to a throw-up and then it can be a mural, then it can be a burner, it can be a production… and so only a small amount of people are gonna be able to get the art side of it, the real art side of it, whatever that might be and then make a living at it, and that’s cool. But if they aren’t allowed to tag, they won’t get there, and the world would really suck if we didn’t have graffiti,” he explains.

“It has to go up, otherwise the artist can’t emerge, and they should be entitled to emerge.”

This, says Thompson-Hernández, “all sounds like bullshit to me, too.”

The host’s ability to present complex topics holistically and powerfully is seen throughout the podcast. One episode, Parrots: A Parable stands out, told not from Thompson-Hernández’s perspective but from the eyes of a green parrot from Mexico.

These birds have built their homes in Los Angeles after being torn from their trees in Mexico and smuggled across the border by poachers. How they escaped is steeped in myth and urban legend, but they sit on electricity lines across the city and fill the sky to green.

“We sat, in near silence, seeing nothing but the reflection of our fear in each other’s faces,” the protagonist says, as they are carried in a truck by night towards the US.

Another parrot tells the group that these creatures, humans,  who have taken them are no strangers to evil.

“It isn’t just the animals they put in cages. They do it to their own. Even the young.”

It’s just about parrots, right? Yet as former president Donald Trump’s voice comes through the speakers, it is no longer just about birds, perhaps it never was at all.

The city belongs to us all, and humans cannot be illegal.

Woven within these stories and memories is a steady heartbeat of Los Angeles, accompanied by a stellar soundtrack that fades in and out of the host’s narrative.

“’Cause would it be LA without Mexicans?
It’s black love brown pride and the sets again”

Only in Cali where we riot, not rally, to live and die
In LA we wearin’ Chucks, not Ballys (yeah, that’s right)

Let me serenade the streets of L.A
From Oakland to Sac-town, the Bay Area and back down
Cali is where they put their mack down; give me love!

“I began to feel an obligation to tell real LA stories,” Thompson-Hernández says, as he reflects that the city is not the same as it was when he grew up there.

“Your streets don’t really look like they did anymore. There’s a lot more white people and less people who look like me here…”

The resulting podcast serves as a record of times gone by, the good and the bad all enmeshed and inseparable; this is the nature of human life. It is a coming of age story, it is a story of a mother’s love for her son. It asks critical questions about migrancy and race while acknowledging the tensions and differing perspectives. Each episode leans into the connection as a way of unpacking stigma and forging a living history so that stories of ordinary people are never forgotten.

“Every place I travelled to I praised you, showed you love, and spoke highly of you, LA. You were supposed to withstand gentrification but instead you embraced it.

“I know it’s complicated but there’s nowhere else I’d rather be. And I’m not the only one who feels this way about you… Because even though you sometimes feel like a stranger to me — I still really, really, love you. I do. And I want to show everyone why.”

As the show wraps up in the final episode, the past lingers, and the future looms, and that teenager who felt seen and heard when he was tagging in the streets of Los Angeles is now sharing his story with the world.

“This show is a collection of stories from people and communities who mean the world to me. That’s not an exaggeration. These stories are sacred and are so personal to my life,” Thompson-Hernández explains.

“For people from LA though — it really feels like we’re a dying breed sometimes, caught between nostalgia and an unpredictable future. I hope something in this show reminds us of how beautiful this city is.

“I always envisioned this more like an audio archive for my friends and my family, for those who have been forced to leave. And, for those who have fought to stay, it’s an ongoing memory. This show is a reminder that people of colour…like many of the voices that you’ve heard in these episodes, are beautiful, special, and that our lives matter. That black lives matter. And, that our city does, too.” DM/ML