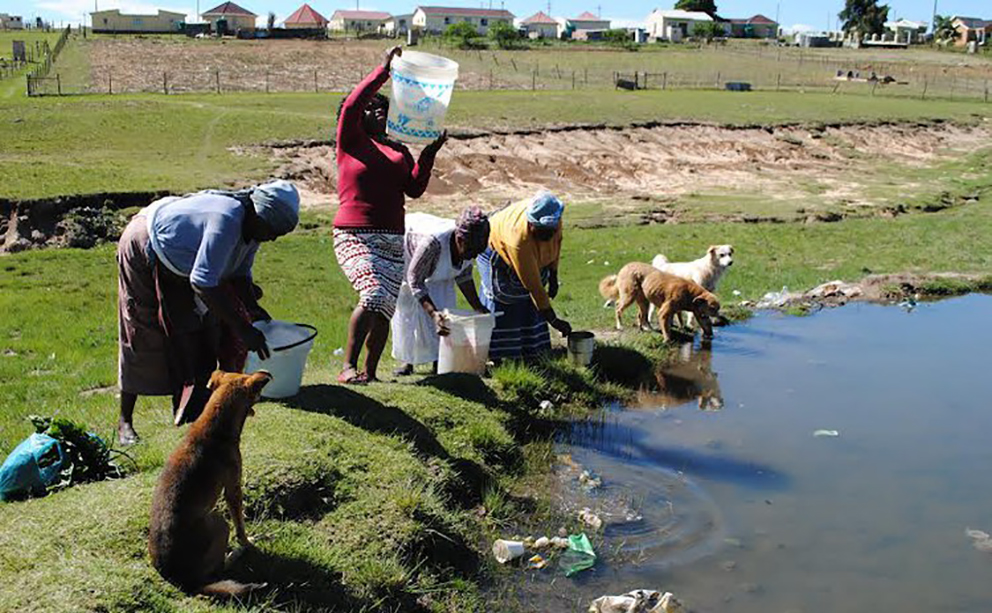 Villagers whose taps have run dry have to share dirty water with lifestock and dogs. (Photo: Mkhuseli Sizani)

The Post Office, SASSA office, library and community centre have all closed down in Qunu, while unpaid electricity bills and armed robberies have collapsed the village's multi-purpose community centre.

Life in Qunu, famously the childhood home of Nelson Mandela, has been getting steadily harder in the past decade. On 15 November, we reported how taps have run dry in Qunu eight months ago and people share water sources with animals.

Now we report that the villagers no longer have a postal service, Sassa cash payments and other social services, Home Affairs, a library or a computer school. And the local community sewing project has ground to a halt.

Much blame lies with the King Sabata Dalindyebo Municipality (KSD) which has failed to pay Eskom since October 2020 for electricity for the Thusong-Qunu Multi-Purpose Community Centre. The electricity was cut off in July. But there is more to the story.

The only service remaining is a preschool. The grounds are now home to grazing goats, sheep and pigs.

The centre was donated by AECI in 2001 in order to bring government services closer to the people. An article in 2012 by News24 extols the vital role the community centre was playing. An 84-year-old cousin of Mandela is quoted saying how much better life had become in Qunu since 1994 — “Before, we had no water, we used to get water from the dam and streams with the pigs,” she said.

Ntombi Ntondini, centre manager since September 2016, said the computer school, which used to offer morning and afternoon classes, was shut down because of a labour dispute. The computers were apparently forfeited to cover the settlement. The space is now the preschool.

She said the Department of Social Development left in 2013 because it was no longer able to transport staff to work.

The Post Office was robbed in January and again in May during the payment of Sassa Covid relief grants. Staff said they would not return until there was security. Ntondini says the centre cannot afford armed security guards. The Post Office remains closed.

Home Affairs closed in 2014, after a burglary in which its computer was taken. But it continued to pay rent, until the March 2020 lockdown.

Ntondini said that without electricity, the library and the community sewing project have now also shut down.

The library serviced three wards and nine schools, and people came from as far away as Elliotdale, Dutywa and Mqanduli, to avoid the overcrowded Mthatha facilities. The photocopy facility at the library was especially vital for the community.

Now, the centre can’t even pay her salary. “Since September 2020, we have not received our stipends. We have been writing several times to the municipality asking for it to take full responsibility for the running of our centre.

“We are a staff of four, consisting of two caretakers, a cleaner and myself. The R15,250 rent was for paying our stipends and also used to buy cleaning materials. But Home Affairs’ rent stoppage has left us with nothing,” said Ntondini.

She said they want the municipality to pay the staff, provide armed security and maintain the building.

Qunu resident Nothemba Baraza, 61, now has to collect her pension in Bityi or Mqanduli or Mthatha. “We spend between R28 and R50 on taxifare to reach these areas,” she said.

“We stand in long queues for many hours and we are exposed to robberies because everybody knows our pay days for social grants,” said Baraza.

Andile Ndzandza, of the Qunu 67 Minutes Arts and Craft project, says the lack of electricity has left its six members impoverished.

“Madiba is a world icon. I left Komani with a hope to get a better life in his home village. But I am very disappointed because we were able to make ends meet only when he was alive,” said Ndzandza.

“Children used to get blankets and toys at this centre during his [Mandela Day] 67 minutes. We also got food parcels. Tourism was booming and tourists were buying.

“But now I am unable to provide for my two children and sister because there is no income. Our designs are gathering dust, while during this time of the year we should be busy selling traditional outfits and beads for the festive season,” he said.

Eskom confirmed the disconnection. It said, “Eskom advised the customer [KSD] of the status of the account before the termination of services. The account was handed over to debt collectors.”

Sonwabo Mampoza, spokesperson for the King Sabata Dalindyebo Municipality, has not answered our questions sent a week ago.

Fumanekile Vinjwa, board chairperson of the Qunu Multi-Purpose Community Centre since 2020, blames previous board members and municipal officials for the current problems.

“The centre is owned by the community. We have a board of nine members for a term of five years. But if we are happy with the board we re-elect it for a second term.

“Graca Machel handed over the centre to us on behalf of Nelson Mandela. She said the failure and success of this centre was in our hands.”

“The National Development Agency (NDA) in East London sponsored us with R500,000 a year … We received this money for three years. We also had an Isuzu bakkie.”

Vinjwa said the mismanagement and lack of record-keeping led to the NDA ending its funding of the centre.