Democracy by instalments: Public pressure mounts for Somalia to complete elections ahead of December deadline 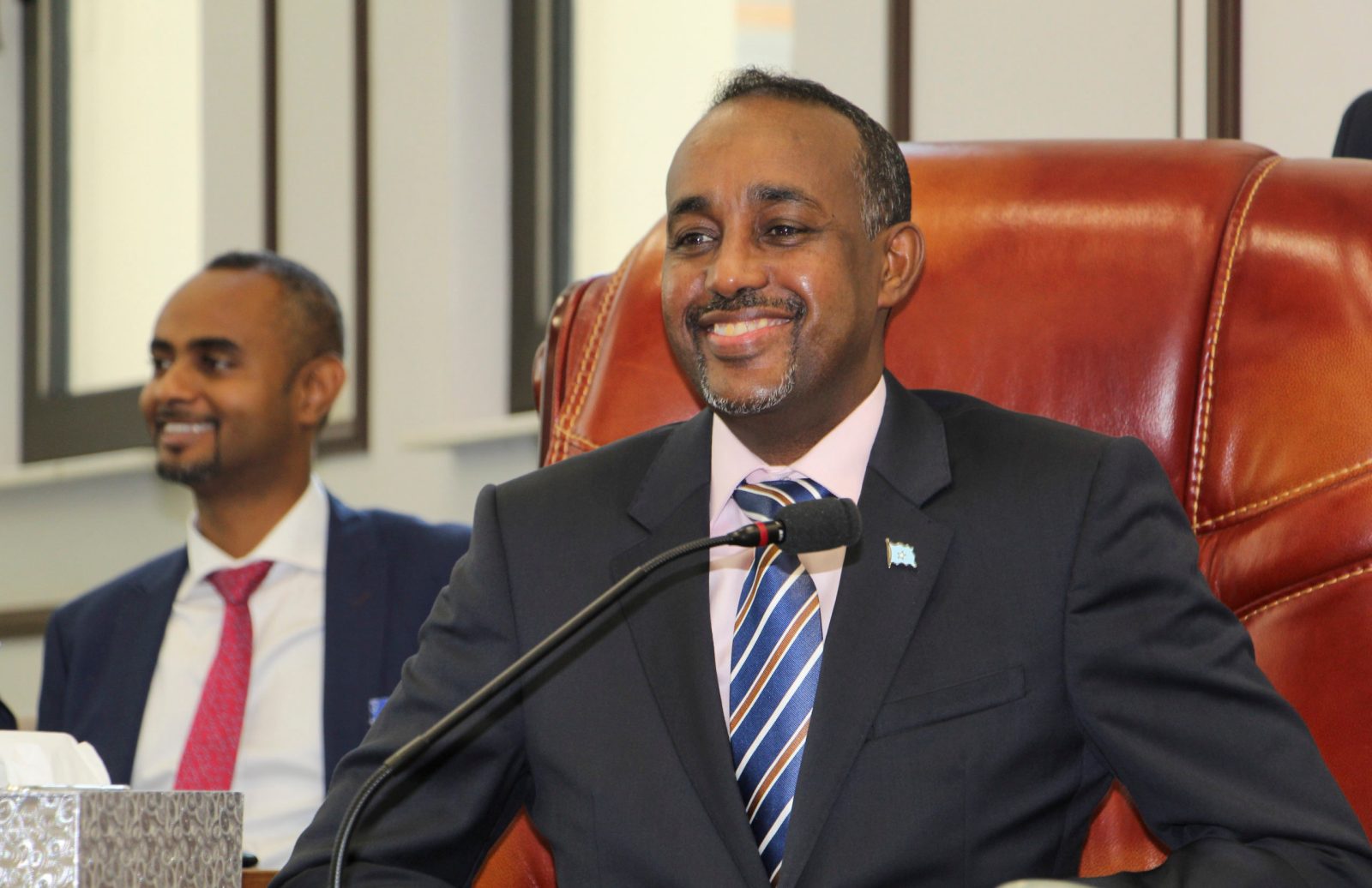 Somali Prime Minister Mohamed Hussein Roble, a Swedish-trained civil engineer, speaks in parliament in Mogadishu, Somalia, 10 February 2021. Somalia is in the midst of a political impasse between the central government and federal states seeking an agreement over elections and the president's mandate which expired on 8 February 2021. Somalia's presidential elections were meant to have taken place before President Mohamed Abdullahi Farmaajo's four year term expired. (Photo: EPA-EFE/SAID YUSUF WARSAME)

Long-delayed Somali polls have started, but their end is not in sight as some leaders continue to play for time.

Somalia this week elected two Members of the Lower House of Parliament in polls delayed by a year, mainly by political infighting. That means it still has to elect 273 more seats by 24 December, and those elected MPs must in turn vote for a president for the ‘democratic’ transfer of power to be complete. Meanwhile the entire Upper House of Parliament — chosen by the member states of the Somali federation — has now just been elected.

United Nations (UN) Special Representative for Somalia James Swann welcomed this progress in a briefing to the UN Security Council on 17 November. But he added that Somalia’s political leaders would have to redouble their efforts to complete the elections as soon as possible “so that all effort can return to the key governance, security, and development priorities in Somalia.”

Another positive was that last month federal President Mohamed Abdullahi Mohamed (Farmajo) and Prime Minister Mohamed Hussein Roble agreed to bury the hatchet after a year-long bitter power struggle that almost led to violence between them.

One of their main disagreements was over the election, which was supposed to take place by February so that Farmajo’s first term could end constitutionally. Roble has been pushing hard for the elections to take place ever since. And last month the two agreed to proceed with the polls within weeks. The delayed elections had already sparked protests and violent clashes with security forces.

Omar Mahmood, Senior Analyst for Somalia at the International Crisis Group, believes it’s too early to say the democratic process is back on track. Many logistical and political issues haven’t been fully addressed. He notes that even if Roble is pushing for the Lower House elections to be complete by 24 December, meeting that deadline requires the political elite to be on the same page. That is the federal state presidents, plus Roble and of course Farmajo.

“I don’t think the political will across the board is there yet to finish this in a timely manner,” Mahmood says. So meeting the December deadline is unlikely.

Mahmood notes that the two MPs elected on 1 November represent Somaliland — a self-declared independent state that Somalia claims but doesn’t control. So the elections were relatively straightforward as the number of electors — being ‘diaspora’ Somalilanders — was small, and all were in Mogadishu. For the remaining 273 MPs, the electoral process remains more uncertain.

Some in Somalia had hoped for direct elections by now. But continuing insecurity — with the ferocious al-Shabaab extremist insurgency still controlling most of the countryside and frequently launching attacks in cities — meant the polls remained indirect. Clan elders and civil society are selecting some 27,000 delegates who in turn elect the MPs for their districts.

The fact that no specific election date could be agreed on, as in conventional elections, speaks volumes about the fragmented politics of Somalia. The relatively small numbers of voters involved, though, has at least enabled the elections to proceed in unpredictable instalments with each federal state holding its polls when convenient.

So what next after the Somaliland elections last week? Mahmood thinks the other votes will happen in dribs and drabs. “Every time you get a few out, then the pressure drops, it buys you a few more weeks. I think it’s going to drag out like that for a couple of months.”

The pace will be dictated by the tension between the leaders who want to move forward to show progress and momentum, and those who want to take a few small steps to buy time.

If Roble leads the hurriers, Farmajo leads the stallers. The longer the delay, the longer Farmajo remains in office, and although he is entitled to run for a second term, victory is far from certain. He is likely to face two former presidents and a former prime minister, probably as a few dark horses — as Farmajo himself was when he won in 2017.

Mahmood says the delay camp also includes some federal state presidents close to Farmajo. It also comprises some member states holding out in the hope that changes are made in the electoral process, to their advantage.

The danger according to Mahmood is that if there is no new Parliament in place by the start of the new year, this could aggravate frustrations and provoke protests by the political opposition. These could turn violent as they had done already this year. Confrontations resulted in protesters being shot dead by government forces, while different security units also clashed with each other.

“Eventually you’ll have a presidential vote which will be still quite contested but I think everyone is looking to see the completion of this process to get back to some level of normality. Which is really needed as other priorities aren’t being addressed right now, such as security, such as some of the state-building tasks, the economy can start getting back on track.”

One of the major security worries that has been put on the backburner by the election delay is the future of the African Union Mission in Somalia (Amisom) that’s been helping keep al-Shabaab at bay. Its mandate is supposed to expire on 31 December, but the UN, the African Union and a distracted Somali government have been unable to agree on its future.

There is however general agreement that at least for the immediate term, the Somali security forces cannot do without Amisom. Not a good time for democracy by instalments. DM