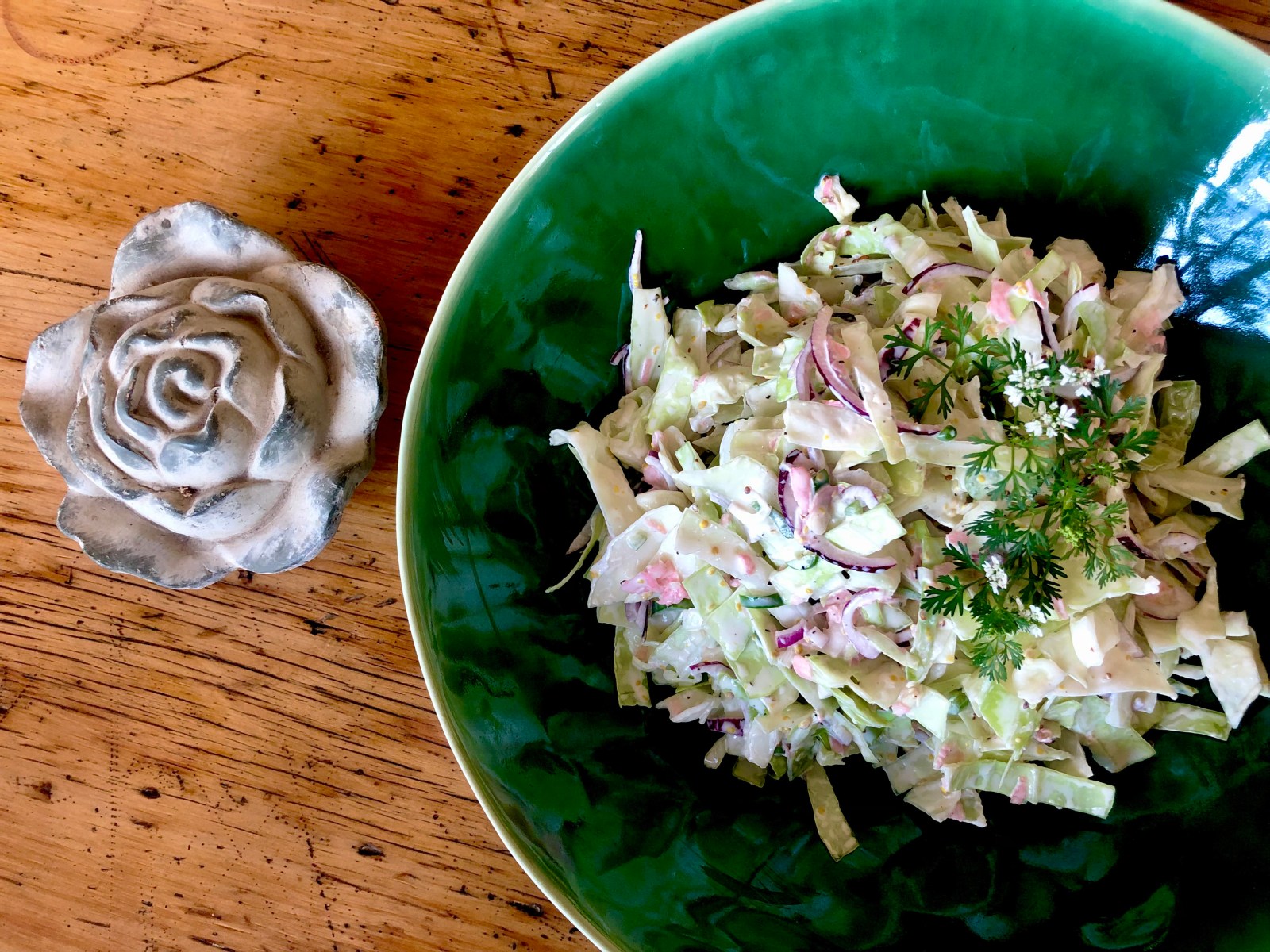 The Afrikaans word for cabbage gives us a clue: kool. Because coleslaw originates in the Netherlands, where it was known as koolsla as early as the 17th century. In food, everything has a story. Even coleslaw.

If Americans think of coleslaw as “theirs”, it’s understandable, but its origins lie far from there. The Dutch brought the dish with them to New York City, where the English took to calling it “cold slaw”, from which “cole” derives, but the provenance of this famous salad goes deeper than that, all the way to Ancient Rome if some pundits are to be taken at their word.

The only constant in coleslaw is cabbage. If cabbage is the hero of salad, it’s coleslaw. Yet there have been occasions when coleslaw has even been served hot, even though it obviates the first half of its name.

A recipe for koolsla appears in a Dutch tome from 1669 called De Verstandige Kok (The Sensible Cook: Dutch Foodways in the Old and the New World). Wikipedia attributes it to “the author’s Dutch landlady, who mixed thin strips of cabbage with melted butter, vinegar, and oil. The recipe for coleslaw as it is most commonly prepared is fairly young, as mayonnaise was invented during the mid-18th century”. So the original version had no mayo; it hadn’t been invented yet.

There are variations on a cabbage salad theme from Germany (krautsalat though cabbage there is called kohl) and Poland to Ukraine and Russia, via Sweden (perhaps) but not Italy, whose insalata capricciosa Wikipedia lists as a variant but, since it often does not even contain cabbage, it is not, even if it does contain lots of lettuce and other vegetables, and mayonnaise. The Wiki entry for what they term Sweden’s ​​kålsallad is also suspect, since even the online encyclopaedia observes that in Sweden the recipe is “reserved for cabbage salad with carrots and mayonnaise-based dressing, and is typically seen [in Sweden] as part of the American cuisine”.

Is there an argument for coleslaw having Ancient Roman origins? This has often been posited because Romans of the day enjoyed a supper of cabbage with eggs, vinegar and spices. That’s a slim argument, even as slim arguments go.

Americans like to think of many things as “American” and coleslaw is one of them. But, as the Los Angeles Times observed in 1991, “Coleslaw is one of those all-American dishes that was, of course, invented somewhere else – in this case, Britain or Holland or Germany, depending on whom you ask, gets the credit”. It also explains that cole is Old English for the German “kohl”, which makes perfect sense. The newspaper added, however, that “many early American cookbooks referred not to cole slaw but cold slaw”.

Florence Fabricant wrote in the The New York Times in 2001 under the headline Slaw Without Cabbage: Is Nothing Sacred?: “But now cabbage is just a starting point. The colors, flavors and textures of a whole farmer’s market give slaw a new personality. For the slaw lover, the possibilities are almost infinite. Crisp vegetables that can be shredded easily are best for slaw. What first comes to mind, in addition to cabbage (green, red, savoy and Chinese or Napa), are carrots, parsnips, cucumbers and radishes (especially long white daikon). Celery, celery root, onions, zucchini, yellow squash, fennel, white turnips, bell peppers, kohlrabi, asparagus, jicama and radicchio are excellent.”

So there is no law, as such, that decrees that coleslaw must contain mayonnaise, or carrot, or anything else other than cabbage. With this in mind, I set out the other day to create a coleslaw recipe that suited my palate. I wanted it to have crunch, which is the easy part, because fresh cabbage has that. And this cabbage could not have been fresher. It had been pulled from the ground an hour before on a neighbour’s farm, and brought to town on the back of his bakkie while delivering a load of braai wood to my house. I paid Oom Jannie 10 bucks and he handed me a giant cabbage as fresh as morning dew.

I used only a small part of it for the salad that follows, to which I added not carrot, but pickled ginger (that sweet, pretty pink pickle you buy in jars from the Asian ingredients shelves of the supermarket), red onion, and green chillies. But it’s in the dressing that the rest of the flavour comes: Hellmann’s mayonnaise, whole grain mustard, the pickling liquid from that same jar of pink ginger, and salt and pepper. The mayo plays a smaller role than you might normally expect, so that the other flavours can come to the fore. We both thought it was the most delicious coleslaw we could remember eating in ages. Note the relatively large quantity of wholegrain mustard.

Mix the dressing ingredients – the mayonnaise, mustard, pickling liquid, salt and pepper – in the bottom of a salad bowl. Liquid from the pickle jar adds flavour but also stretches the mayo and makes for a runnier dressing to help coat all the hard ingredients.