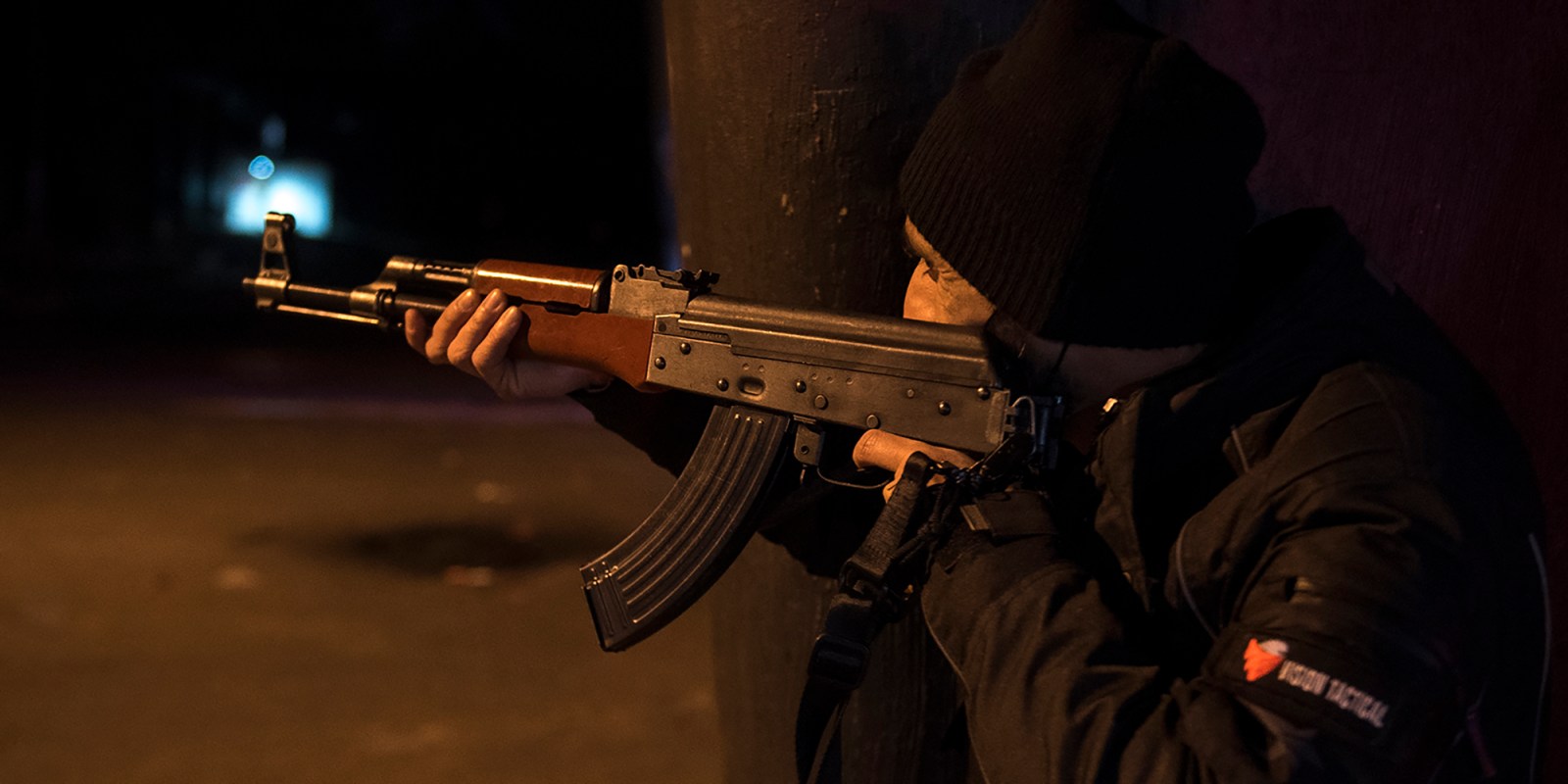 A member of a private security company points his rifle at a taxi after pushing back protesters in Jeppestown, Johannesburg on 12 July 2021 during the eight days of looting in violence in KwaZulu-Natal and Gauteng. (Photo: Shiraaz Mohamed)

South Africa has a 560,000-strong private security industry, but death or injury at the hands of security officers is not routinely recorded or made public. This is set to change after the President signed the Private Security Industry Regulation Amendment Act into law, in the wake of the July 2021 killing of 36 people in Phoenix.

In the wake of the looting that wrecked parts of KwaZulu-Natal and Gauteng in July 2021, the actions of several private security companies in KZN’s Phoenix, which left 36 people dead, are now under investigation. While incidents like this bring the risks and challenges of excessive force by private security to the fore, there are probably many more that go unnoticed.

Across the 560,000-strong industry that provides armed services from asset and VIP protection to guarding and armed response, death or injury at the hands of a security officer is not routinely recorded and made public. Unlike SAPS or Metro Police officers, who are bound by law to report deaths to the Independent Police Investigative Directorate (IPID), which investigates and reports the number of instances to Parliament, cases involving private security simply become part of the SAPS caseload.

While the details might be described in the docket, the occupation of the suspect investigated is not part of the statistical categorisation provided. The rate of instances of death or injury as a result of private security force action is thus unknown except through difficult and expensive research.

But this will change. On 8 October 2021 the President finally signed into law the Private Security Industry Regulation Amendment Act, eight years after it was introduced into Parliament in 2013. Under the new law the Private Security Industry Regulatory Authority (PSIRA) must report quarterly to the police minister on instances in which firearms were discharged by a security officer in the performance of his or her duties causing death or injury.

It is a small step towards making the industry more accountable where regulation over the years has focused mainly on professionalisation and the protection of labour rights. The current regulatory instruments are almost exclusively concerned with the regulation of employers; the registration of employees; enforcement of minimum working conditions; and ensuring training standards are met. They provide little oversight of the conduct of individual security officers.

The current regulatory system is largely a business regulation model rather than a model of public service governance, hence the challenge of state regulatory systems to deal with incidents such as the aftermath of the Phoenix violence.

Again, the June 2021 images of private security protecting infrastructure from looting and of the SAPS not responding at the time and excusing themselves by saying they thought these facilities were under the protection of private security, should dispel any myths about exactly how interlinked state policing and private security in South Africa have become. Higher levels of accountability for the actions of individual private security members and the companies that employ them are entirely appropriate.

The provision to report on firearm-related deaths and injuries begins to recognise that this is no ordinary industry and that oversight and compliance need to extend beyond the administrative compliance placed on companies to register with PSIRA and to ensure its employees are properly trained and accredited. The actions of individuals, not simply as private citizens but as members of the private security industry, need to be held to account.

According to the provisions, PSIRA will need to report to the minister by the end of the year on all deaths or injuries by firearms at the hands of the private security industry over the past three months. It will be a very interesting process. Not only will we finally get a sense of the extent to which lethal force is being used by the industry, but its comparison to our knowledge of the SAPS incidents will also be very telling. If cases of inappropriate use of force are significantly lower than those revealed by IPID of police conduct, it would be important to establish and understand how this is achieved.

How PSIRA will go about compiling these statistics will also be interesting. Most likely it will need to include introducing a system of SAPS reporting on cases involving death or injury at the hands of employees of private security companies to PSIRA. For this, an amendment to the SAPS Act will be needed with concomitant sanctions for non-reporting by companies.

IPID and the Civilian Secretariat of Police Service provide vital information to the public on the functioning of the SAPS. The misconduct of a single police officer is not only a matter between the offender and the victim, but is an issue of public interest, as in any democracy. It is an indicator of the effectiveness of systems and policies and the extent to which rights are being upheld and protected.

This should be no different for the private security industry. DM