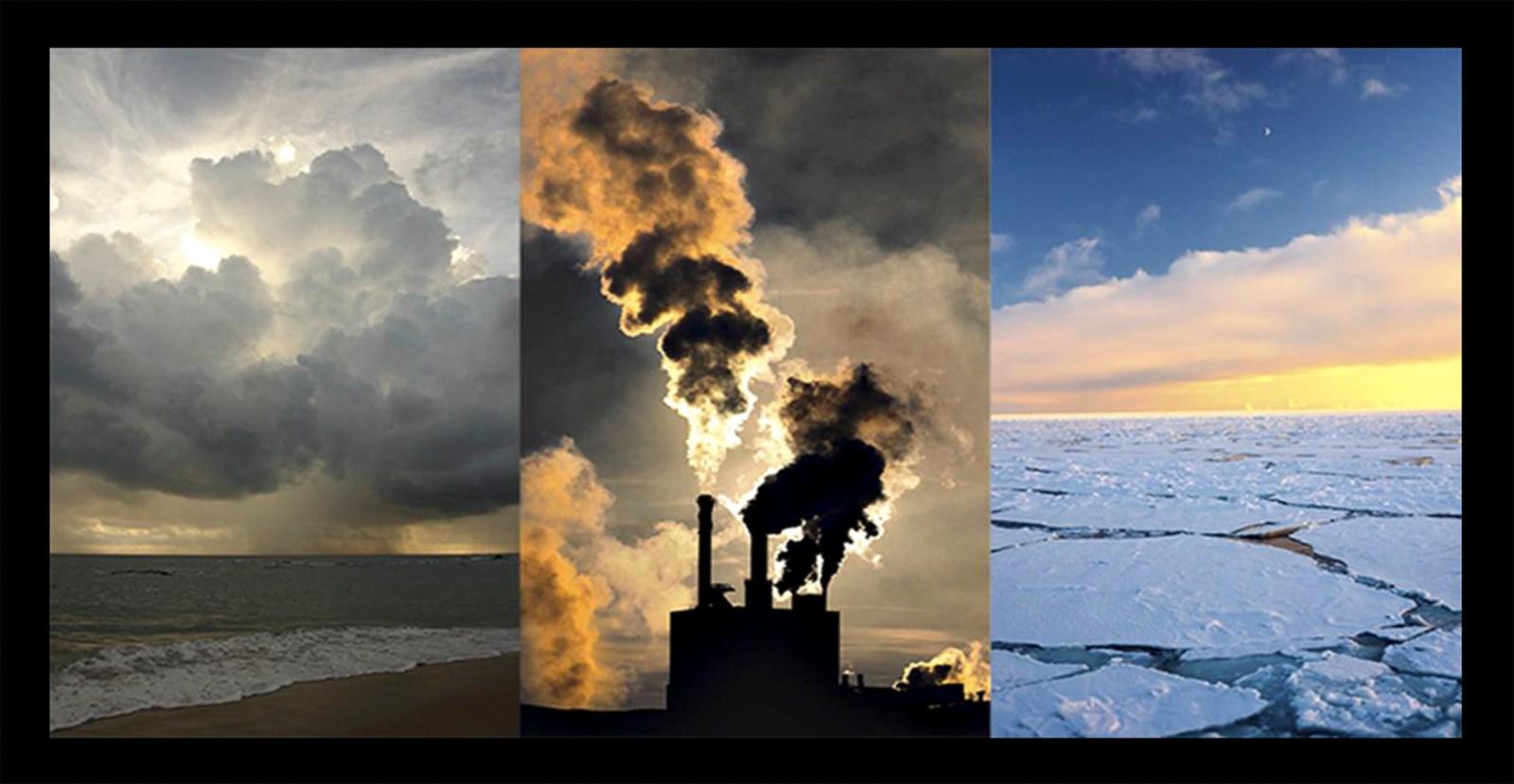 The government and business cannot ignore the evidence anymore: we need a more deliberate action to address the climate crisis. (Photo: climate.nasa.gov/Wikipedia)

The Presidential Climate Commission is premised on pioneering a social compact for a ‘just transition’ in response to the climate crisis. It has much work to do to get some consensus.

‘The climate transition is something that affects every South African and we all need to be part of its design and implementation. … There is broad support among social partners for an ambitious, realistic and, most importantly, just transition.” From the desk of President Cyril Ramaphosa, 21 Oct0ber 2021

Over the past two weeks much of the world’s attention has been focused on the negotiations taking place over the climate crisis at COP26 (the 26th Conference of the Parties to the United Nations Framework Convention on Climate Change).

Particular attention has focused on the need to drastically reduce carbon emissions that are driving global heating. There is urgency to this: in southern Africa scientists believe that global warming will take place at twice the rate of the global average.

Where do we start in assessing the measures South Africa is taking to mitigate the climate crisis? One obvious place is the Presidential Climate Commission (PCC), established by President Ramaphosa in December 2020. Its purpose includes making recommendations to the government on strategies and actions to address the climate crisis.

The PCC is a weighty and top-heavy body. It is made up of 10 Cabinet ministers and 22 commissioners drawn from other social sectors, including leading climate and environment activists in civil society. It is chaired by the president, but its de facto convenor is its deputy chairperson, veteran activist and former minister of environment and tourism, Mohammed Valli Moosa.

According to its website the PCC’s mandate includes: providing independent expert advice on SA’s climate change response; facilitating a common vision for a net-zero and climate resilient economy by 2050, and mapping pathways to get there; monitoring progress with emissions reduction and climate adaptation goals, as well as the achievement of a just transition linked to broader development objectives.

The PCC has a secretariat of 10 people and a budget of R20-million (and rising) a year. The Climate Bill, which is expected to be passed by Parliament in 2022, will make the PCC a statutory body. It has contracted Trade & Industrial Policy Strategies (TIPS), an independent think-tank, to prepare research papers on different topics related to achieving a just transition. This, it says, is “providing an evidence-based foundation for the new framework”.

Moosa says the PCC has cut a new path of transparency and inclusion; its plenary meetings have all been open and its documents and deliberations are accessible although its minutes and resolutions are not.

Bobby Peek, an environmental activist of many years standing, is one of the commissioners. Peek welcomes the openness but also stresses that digital inequality means that the people and communities most affected by climate change are still inadvertently kept out of the room.

This, Peek says, has to change urgently. For him, the place to forge a just transition is in the most vulnerable communities by ensuring health, livelihoods, mass public transport, and so on. This will be where the PCC’s rubber hits the tar (or not).

The challenge of building consensus

The PCC’s mission is to “develop consensus between social partners around the core components of a social transition” away from carbon. However, because of SA’s deep inequality, vulnerabilities to global heating differ by class, race and gender. Vital and urgent decarbonisation means closing down coal power and this will affect the employment and livelihoods of the working class and poor. This makes gaining consensus on the modalities of a just transition as difficult at a national level as it is at an international level.

As part of its consensus building, the PCC has held a series of policy dialogues on issues such as water security, financing a just transition, employment and livelihoods, and the coal value chain.

But beyond talk, what has the PCC achieved so far? One of its first practical tasks was to assist the government to decide South Africa’s Nationally Determined Contribution (NDC) to the global reduction of carbon emissions. This led to a recommendation being handed to the President on 1 July 2021, which, Moosa says, contributed to the Cabinet’s decision to revise and adopt more ambitious targets “in line with recommendations by the PCC”.

Thus, in September, the Cabinet announced a more ambitious NDC: “to limit greenhouse gas (GHG) emissions to 398-510 Metric tonnes of Carbon dioxide equivalent (MtCO2e) by 2025, and to 350-420 MtCO2e by 2030”. In plain language, this means reducing the amount of coal burnt by our power stations and therefore the amount of carbon dioxide injected into the atmosphere.

Our new targets were welcomed by the Climate Action Tracker, which called it “a good example of how governments can increase their mitigation ambition over time”, while noting that, “despite being a step in the right direction, the updated target is not yet Paris Agreement compatible”.

However, the PCC says that in making the NDC and other recommendations it is essential “to develop an approach that is socially just, evidence-based and ambitious”.

It is a delicate balancing act, as the out-of-kilter advocacy for using our fossil fuels of Gwede Mantashe, minister of mineral resources and energy, demonstrates.

At the time that it made its NDC recommendation, the PCC argued that the greater ambition “opens up the prospect of greater levels of international finance support”. In October, President Ramaphosa seemed to agree with this when he wrote that the government is “engaging with our international development partners on a just transition financing facility to support our decarbonisation” and referred to “a window of opportunity to mobilise additional climate finance”.

This seems to have been borne out in the much-vaunted R131-billion financing agreement announced at COP26, and “cautiously welcomed” by civil society organisations, such as the coalition Life After Coal.

Civil society – in and out

A PCC paper written by TIPS, titled Towards a Just Transition, A Review of Local and International Policy Debates, recognises that “there is little clarity in South Africa regarding the need for a transition or the aims of a just transition in that context”. It warns that: “Without consensus on the parameters of the concept it is hard to imagine how progress across a diverse spectrum of stakeholders will be achieved.”

This conclusion is borne out by a survey by Afrobarometer that reveals very low levels of understanding of climate change among the population at large.

This makes the collaboration with and mobilisation by civil society a vital part of the PCC’s formula for a just transition.

In this regard the TIPS document notes that much of the discussion on the climate crisis “continues to take place between a small number of parties that have already bought into some version of the need for a just transition”.

This is why it’s important that the PCC has included civil society and labour movement activists among its commissioners.

Despite this there are some civil society organisations that question whether the PCC is going to be a help or a hindrance.

Vishwas Satgar, one of the coordinators of the Climate Justice Charter Movement (CJCM), the broadest coalition of activists and organisations campaigning on the climate crisis, said: “We are extremely dissatisfied with the PCC’s ‘climate modernisation’ approach.” He described its NDC target as “underwhelming” and criticised “the ‘net zero’ idea as locking us into 2050”.

Satgar also lambasts, what he calls Environment Minister Barbara Creecy’s “appropriation of ‘climate justice’”, which, he says, “is about legitimising this narrow finance, markets and technology climate modernisation approach”.

As a result, says Satgar, the CJCM has, up to now, not engaged with the PCC. Instead, it has chosen a path of mobilising communities around a Climate Justice Charter, which has been endorsed by 260 organisations. On 9 November it held a demonstration outside Parliament to condemn the “carbon criminals” in the government, Eskom and Sasol.

Moosa’s response is that  “we must accept, expect, conduct and encourage robust debate on this question”. He said: “The Commission must be the place for everybody to come and put forward their views and debate. And try to influence the national direction.” Moosa said he would invite the Climate Justice Charter movement to present the Charter to and debate its proposals at the PCC.

So, in conclusion, in the words of Peek, the jury is probably still out on the PCC. Its structure, composition and staffing are full of promise. But as global heating continues, largely unchecked by all the bombast of Boris Johnson and his ilk at COP26, an inevitable baptism of fire awaits structures like this as they are tested by the realities of a crisis that is not going to wait patiently as we get our house ready for the coming storm. DM168