Environmental racism: COP26 failed the indigenous people of the world 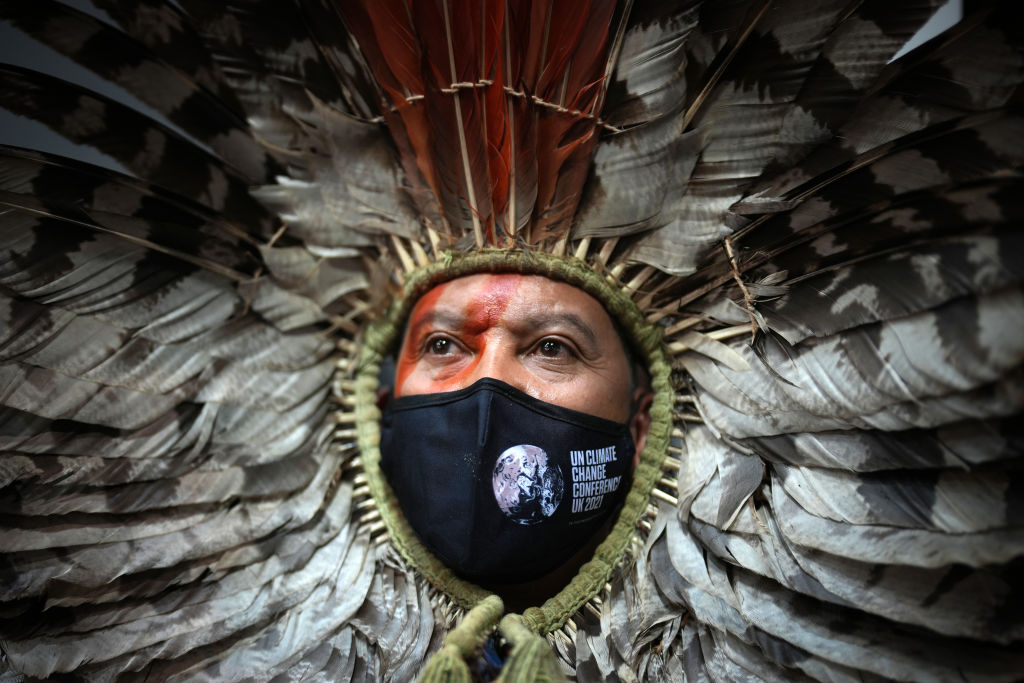 A member of the Minga Indigena indigenous delegation at COP26 in Glasgow on 3 November 2021. The Minga Indigena, a group of indigenous leaders, took part in official and alternative events at the summit, to promote awareness of their struggles to achieve territorial, economic, social and cultural rights in the context of the climate crisis. (Photo: Christopher Furlong/Getty Images)

Despite the 26th Conference of the Parties in Glasgow being touted before the event as the ‘most inclusive’ COP yet, indigenous leaders feel their voices have once again not been heard.

‘The first challenge for me around COP was deciding whether I should actually be there. And for a couple of weeks I went back and forth; should I go or not – is it worth it?”

As the executive director of Natural Justice, an indigenous and environmental rights group based in Cape Town, it wasn’t as if Pooven Moodley was being coy with this admission. A leading African activist with major victories to his name – famously, in 2019, his organisation had been instrumental in scuppering China’s plans for a coal-fired plant in Kenya’s Lamu Archipelago – Moodley knew better than most what the stakes were.

Still, there he was, speaking to us from the 26th Conference of the Parties (COP26) in Glasgow, Scotland. On the day of our interview, the developing story in the mainstream press was the number of fossil-fuel reps at COP26 – 503, which if Oil Land were an actual country would render it the largest delegation at the event. And yet, if stats like this were exactly what Moodley was expecting, why did he decide in the end to go?

“I finally made the decision that governments couldn’t be there with only their friends in big business,” he said. “It seemed really important to do my job by supporting the other voices, like civil society and indigenous communities, so that the power bloc could be held to account.”

Once the issue had been settled in his conscience, however, Moodley was confronted with a set of obstacles that applied to many of the activists from the Global South: shifting Covid-19 travel restrictions; potential red lists and enforced quarantines; skyrocketing accommodation prices.

“Driving these unrealistic prices,” he explained, “which were five to 10 times the normal rates, was the fact that people from Europe could book well in advance, sometimes even a year in advance, knowing that they wouldn’t need visas and could definitely attend. In that sense, I’m talking Covid and affordable accommodation in Glasgow, it has really limited the number of people from indigenous and local communities.”

As for the grassroots activists who did make it to Glasgow, particularly those from Africa, Asia and Latin America, it was clear from the second day that they were up against the hypocrisies of entrenched global capital. Many of the pavilions at COP26, said Moodley, were sponsored by multinational corporations – “The South African pavilion, as an example,” he added, “had Sasol as its key funder.”

For every COP back to the first one in Berlin in 1995, such has been the status quo: the scientists sounding the alarm on rising carbon emissions and imminent climate collapse; the politicians talking left in sound bites to the media while walking right in backroom deals with Big Oil. But COP26, somehow, was supposed to be different.

Since COP25 in Madrid, the wildfires, floods and hurricanes have only grown more frequent and devastating, with the damage visited mostly on the world’s poor and marginalised. In that time, while unprecedented weather events have likewise delivered chaos to towns in Europe, Australia and North America, trillions of gallons of meltwater have flowed into the oceans from Greenland and the poles. Disregarding the fact that COP25 had been deemed a failure precisely because the United States had blocked a fund for “loss and damage” to the small-island states, did it not matter that climate collapse was now knocking at the Global North’s doors?

“When looking at the big plans that are being discussed here,” said Moodley, “like the push for net-zero carbon emissions by 2050, what one finds is that a lot of these models and schemes are largely influenced by companies. And when you start trying to unpack what that actually means, firstly there are no details about how the negotiators arrived at their points, so these are just empty pledges and promises.

“The year 2050 is a long time in the future, and when you take into account what the indigenous communities are saying about the four-year gap that we have to transform the way we live on this planet, plus what the [Intergovernmental Panel on Climate Change or IPCC] is saying about the 10-year window, all we’re doing is postponing the urgent shifts that need to happen now.”

Not only that, but with countries refusing to commit to drastic cuts in emissions at COP26, the major targets appeared to be drifting further away. Suddenly, instead of a 50% drop in emissions by 2030, as demanded by the scientists on the IPCC, emissions looked likely to rise 16% by the end of the decade. This, as the United Nations had warned in the days leading up to COP, would put the planet on track for a 2.7°C rise in temperature by the end of the century.

It was, as Moodley said, the “worst-case scenario”. Prior to the event, Glasgow had been touted as the “most inclusive” COP ever – in the press material that had gone out to the world’s newsrooms, there appeared to be an understanding that negotiations would fail if indigenous voices weren’t heard. But on 6 November, with COP26 in full swing, the message from indigenous leaders was that they had been shut out.

“It is not possible to make decisions without consulting those of us who have been violated by the destruction of these territories,” stated José Gregorio Díaz Mirabal, the coordinator of one of the largest indigenous activist groups in the Amazon. “The leaders gathered at this COP cannot boast a success that leaves indigenous people out.”

South Africa’s Tasneem Essop echoed this sentiment of distress. As the executive director of the Climate Action Network, which represents more than 1,500 organisations in 130 countries – including youth groups, trade unions and indigenous people – Essop’s censure packed a huge punch.

“Civil society voices are critical to the outcome of COP,” she stated, “but we’ve not been able to do our jobs. If participation and inclusion are the measure of legitimacy, then we’re on very shaky grounds.”

By all accounts, then, the news coming out of COP26 was that the promises had all been empty. Although the 2015 Paris accords had legally recognised the role of traditional knowledge in tackling the climate crisis, the momentum of profit via the exploitation of the Earth’s natural resources was simply too strong. It was a scenario that Naomi Klein had articulated in her seminal essay Let Them Drown: The Violence of Othering in a Warming World, in which she memorably laid out the link between climate justice and racial justice:

As for Moodley, he was coming home more convinced than ever that the world was leaderless. Would he be at COP27? Probably – because grassroots activism, like indigenous knowledge, remained the only way through. DM168

Environmental racism: COP26 failed the indigenous people of the world