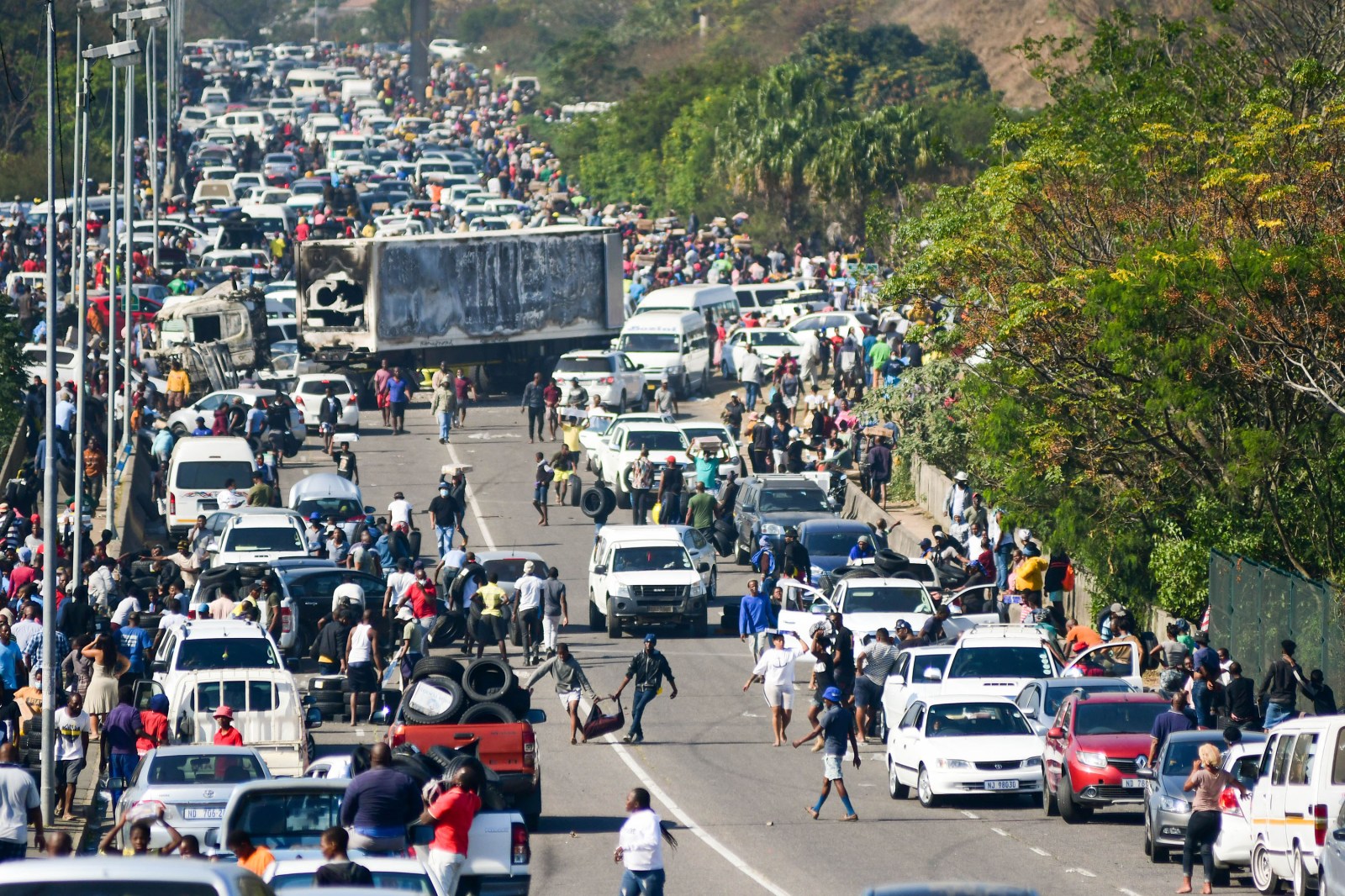 The violence that engulfed the Khan Road Corner informal settlement in Pietermaritzburg came under scrutiny on Monday at the start of the South African Human Rights Commission investigation into the deadly and economically devastating July 2021 riots that brought KwaZulu-Natal, and to a lesser extent Gauteng, to a standstill for eight days.

The KwaZulu-Natal sitting is taking place at the Gateway Hotel in uMhlanga. The commission will hold hearings in Gauteng next week.

Khan Road Corner is in the suburb of Raisethorpe, which borders Northdale, both areas with large Indian populations. It is the alleged “racial profiling” of black residents as looters by Indian residents in KwaZulu-Natal that has become a sticking point among the commentariat, some members of the public and politicians.

Several of those charged with murder and attempted murder have come before courts in KwaZulu-Natal, but trials are yet to start.

The five witnesses that appeared before the commission on Monday all agreed that before the July unrest, the Khan Road Corner settlement was relatively stable, although the final witness, Rashan Jainath, conceded there had been tension between the formal and informal residents, and that much of that was fuelled by ineffective policing from the Mountain Rise Police Station and what seemed to be a lack of interest from the local municipality.

Jainath, a businessman and community activist, described Raisethorpe as “an area known for progressive people known to be involved in the struggle against apartheid”.

Zama Nguse, the aunt of the deceased Sibahle, was the first to take the stand, followed by Thobani Nguse, Sibahle’s brother Wandile Gumede, Sibahle’s friend Sipho Msiya, and then Jainath.

Zama laid out the details that led to her 17-year-old nephew’s death on 12 July, when “security officers” from two private security companies started beating down doors and allegedly threw teargas into shacks, presumably looking for stolen goods or those who had been setting tyres alight on the road adjacent to the settlement.

It was while Zama and Sibahle’s mother, who was six months pregnant, were fleeing their home that Sibahle was allegedly separated from the women.

“Sibahle wasn’t aware in which direction we were running,” said Zama. Soon thereafter, she said she was approached by a neighbour who told her the teenager had been shot. He was bundled into a car and rushed to Northdale Hospital, where doctors declared him dead in the early hours of the morning.

Zama described the bullet wound to Sibahle’s chest as “a small thing”, saying she was not aware such an injury could be so deadly.

It was while travelling back home to inform Sibahle’s father of his son’s death that Zama said she saw “chaos on the road”, just before 8am. It appeared that looters had broken into Singh’s Liquor, near to the settlement, and were running out with booze. Police were present and were firing rubber bullets in an attempt to stop the looters, said Zama.

That same morning, looters made their way into an auto spares shop and began stealing. According to Zama and the other witnesses, the looters were not from Khan Road informal settlement, but had used it as a thoroughfare to escape police.

It was in this confusion that “the Indians” — as Zama described the residents, business owners and security companies — allegedly descended on the informal settlement and started torching homes and firing shots.

“After the liquor store and spares shop were broken into, they had grouped up and were throwing explosives (from the description given, possibly petrol bombs) into houses and shooting”.

The commission heard later from Jainath that 62 shacks were destroyed in the violence.

Zama said she was shot while trying to retrieve her ID documents and the clinic cards of her two children from her shack. She wasn’t able to get medical attention, she said, because “everything was blocked”.

Zama also touched on the death of another resident, a woman who was allegedly shot by one Nicholas Moodley. Zama said she saw the killing taking place and recognised Moodley, as her common-law husband once worked for him.

According to The Witness newspaper, 35-year-old Moodley was arrested alongside Osman Dawood (57) and Sathasivan Athio (47) on charges of attempted murder, murder, arson and malicious damage to property. The three men allegedly went to Khan Road settlement on the morning of 12 July looking for people who had looted their businesses. It was allegedly during this upheaval that Nokuthula Noxolo was shot.

The Witness reported that the men had handed themselves over to authorities when they found out they were being sought for questioning, and that while being cross-examined for bail applications, the investigating officer in the case conceded that Moodley did not have a registered weapon and no weapon was found at his premises. The investigating officer also said he had not taken into account video evidence showing residents from Khan Road Corner leaving the settlement to loot businesses because this had not yet been authenticated.

The men were subsequently granted bail.

In his evidence on Monday, Thobani Nguse said he had also been shot during the violence at Khan Road, but was unable to seek medical attention so had attended to the wound himself. Thobani said the “second phase” of the attacks at Khan Road started after the looting of the bottle store and spares shop.

He said he was among a group of men who had confiscated liquor from the looters “so that the owners, when they were looking for it, we could give it back to them, because our thinking was, you can’t be an outsider and do criminality and bring it into the community”. The liquor that he confiscated was subsequently torched, he said.

Jainath, as mentioned previously the last witness to testify, told commissioners that of the 62 houses that had been torched at the settlement, the peace and development committee in the area, of which he is the convenor, had already replaced 45. The community had raised “about R700,000” for the development of the area, he said, which would include the procurement of chemical toilets.

Peace would not be possible without development, said Jainath.

Pietermaritzburg was one of several areas that came under attack in July as thousands of looters — many of them armed — broke into businesses, stole goods and vandalised and torched infrastructure, malls, ATMs, warehouses and bottle stores, with “overwhelmed” and under-resourced police unable to control the violence.

According to police minister Bheki Cele, speaking before the National Council of Provinces just after the riots, 359 people were killed, the vast majority of those being in KwaZulu-Natal. The province’s premier, Sihle Zikalala, has stated publicly that most of the deaths were due to the looters being crushed in the frenzy for stolen goods, or fighting among themselves for the goods.

Countrywide, according to Cele at the same NCOP meeting, 300 banks and post offices were vandalised and 161 malls, 11 warehouses, eight factories and 161 liquor outlets/distributors were “extensively damaged”.

More than 200 shopping centres were looted and more than 1,400 ATMs damaged. In KwaZulu-Natal, hundreds of schools were also vandalised and scores torched.

The eight-day looting spree is estimated to have cost the national fiscus more than R50-billion and led to the loss of more than 100,000 jobs, at a conservative estimate.

The commission will be conducting an in loco inspection at the Khan Road Corner informal settlement on Wednesday.

Witnesses to be called in the following days will include the KZN premier, academics, researchers and the journalists who authored Eight Days in July, a book on the riots. DM