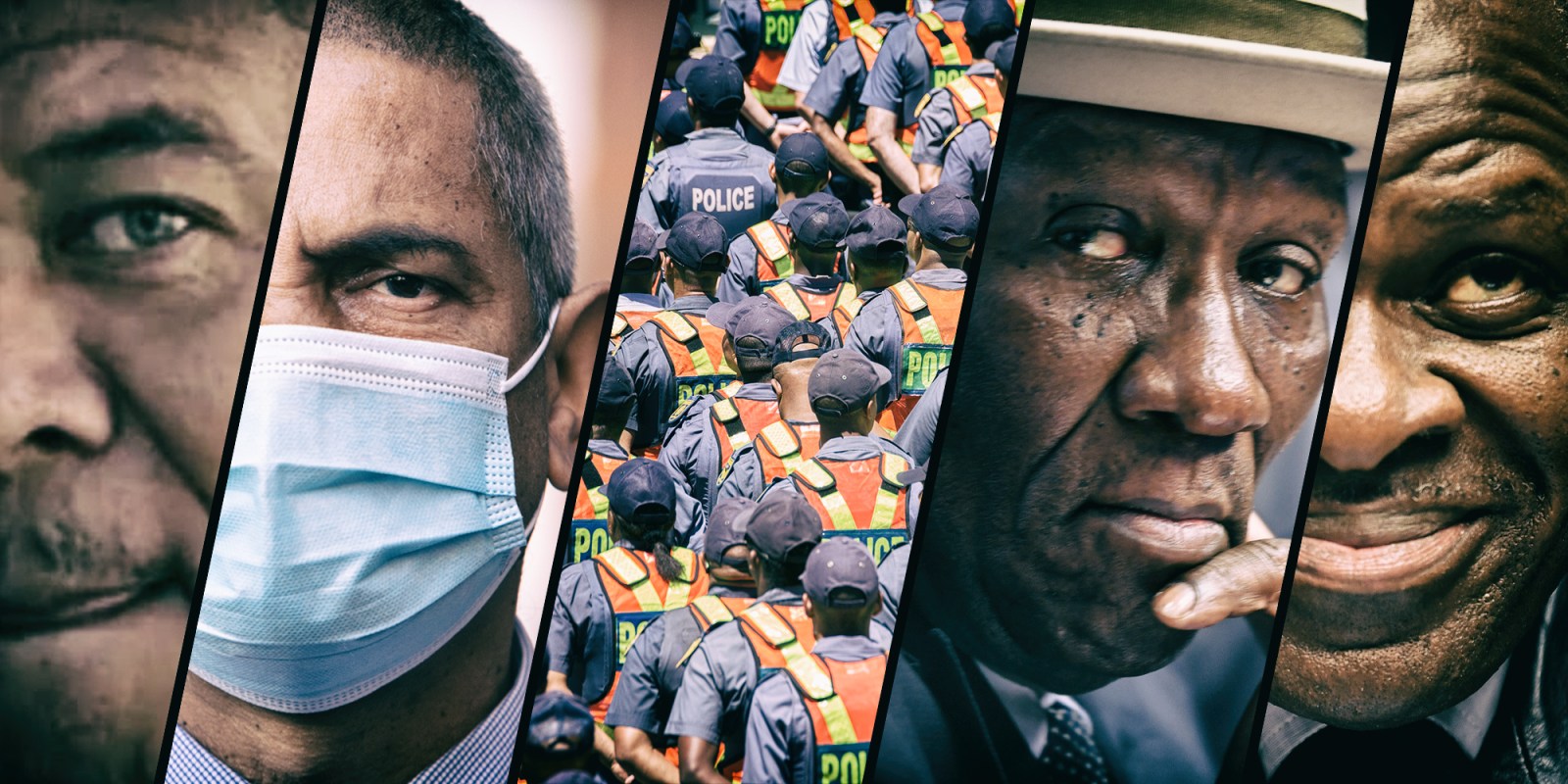 Hearty congratulations were heaped on police managers when the service’s annual financial records were discussed in Parliament this week, but a few ominous comments about snipers and their targets hinted at the reality beyond paperwork and just how badly fragmented South Africa’s policing is.

To try to get a sense of just how policing evolved over a year, DM168 analysed changes in the organisational structure of the South African Police Service (SAPS) management, from its previous 2019/2020 annual report to now. The situation is alarming.

There has been a web of high-level investigations conducted by police officers who, in some cases, have themselves been the focus of investigations.

On a more sinister note and as previously reported, an investigation was launched into the July death of top policeman Sindile Mfazi following suspicions surfacing that he was poisoned, while at a provincial level Lieutenant-Colonel Charl Kinnear was assassinated in the Western Cape in September 2020.

A gunman shot the cop involved in investigating other officers while he was in his car outside his Cape Town home in an incident that caught the attention of the country’s top police bosses.

All this has happened amid intense infighting and under the leadership of National Police Commissioner Khehla Sitole, who now faces possible suspension.

On 10 November, during a Portfolio Committee on Police meeting, it was reported that the SAPS’s 2020/2021 annual financial statements were unqualified with findings.

In between glowing praise for SAPS management because of this, Police Minister Bheki Cele acknowledged congratulations were in order, but also addressed underlying issues.

Speaking to some of South Africa’s highest-ranking police officers, including Sitole and Hawks head Godfrey Lebeya, Cele seemed to refer to criminal elements among cops.

“It’s a proud moment, but it’s also a fear moment because it’s cold there and it’s lonely up there, so when you keep going up you become a good target for snipers. The higher up, the more vulnerable [you are] to snipers,” Cele said, in reaction to the audit findings.

“These attacks could be both internally as an organisation and externally.”

Cele admitted that it was not all rosy in the police service and that “there are times when boxing really does take place”, leaving some with “bloody noses”.

His words, given the overall positive tone of the meeting, were somewhat out of place, but perhaps the most realistic.

During the virtual meeting, which saw power cuts resulting in some members being unable to remain online, Sitole also spoke.

He did not bring up his potential suspension and instead focused on what could be done to bolster police finance systems for improved audit outcomes.

He also said a cleanup campaign had been introduced to tackle corruption. His words, though, could be viewed as somewhat ironic because of his uncertain future.

At one point, when asked about police officers who had been fired and had successfully challenged this legally but had not yet been reinstated, Sitole said he did not want to fight court battles with members.

But for nearly a year his name has surfaced in several Labour Court cases driven by police officers who feel they are being unfairly targeted in the service.

Sitole did not escape the scrutiny of other meeting attendees wanting to know about the effects of his conduct.

He was served with a notice of suspension by President Cyril Ramaphosa and last month he filed papers with the president giving reasons why he should not be suspended.

The suspension relates to withholding information about Crime Intelligence’s allegedly unlawful attempted procurement of a surveillance device known as a grabber for the heavily inflated price of R45-million (the regular price was R7-million) before the ANC’s elective conference at Nasrec in 2017.

While this issue was not on this week’s meeting agenda, Ockert Terblanche, the DA’s Shadow Deputy Minister of Police, addressed “the elephant in the room”, that being Sitole’s possible suspension along with two other officers. Sitole himself did not respond to comments about it, but Deputy Police Minister Cassel Mathale did.

He said the situation relating to Sitole was “not affecting our ability to do work”.

While there were workplace challenges, Mathale said: “We want to [assure] South Africans we are doing what is necessary and expected of us.”

However, police will have to go above and beyond what they may deem necessary to repair trust in a clearly flailing service.

In-fighting aside, Covid-19 impacted on services.

“The underachievement was due to lower production levels, due to Covid-19, the evacuation of SAPS premises, due to positive Covid-19 cases, an outstanding service, resulting in non-operational equipment and machinery, as well as an outstanding maintenance, calibration and validation contract.”

However, the meeting did not address the issue of police officers involved in smuggling firearms or playing a role in enabling suspects to get their hands on firearms.

In October last year, two station commanders were arrested in Gauteng, bringing to 28 the number of suspects arrested in an alleged firearm-licensing syndicate scheme.

Seventeen of the 28 were police officers.

At the time Sitole said: “We are systematically identifying and rooting out corruption and corrupt members from the SAPS.”

DM168 has focused on messy issues, such as the cop arrests and related matters sprawling out from there that may not fit neatly into a meeting agenda in Parliament but that have affected policing in this country.

A quick look at an organogram of the police management shown in the 2019/2020 SAPS annual report shows that while some positions remain unchanged, the top structure is vastly different now compared with 31 March 2020 (the end of the previous financial year).

For example, in October last year, Deputy National Police Commissioner Bonang Mgwenya was arrested, according to a police press release, on “charges relating to corruption, fraud, theft and money laundering”.

She was fired the following month, when it emerged that, in an unrelated matter, national Crime Intelligence boss Peter Jacobs was to be suspended.

From there intricate fissures spread out.

As police officers were investigated and moved within the service, other officers were appointed to replace them, causing a ripple effect.

It turns out Jacobs knew of evidence allegedly showing gross abuse of the Secret Service Account by Crime Intelligence officers.

He went on to be suspended over allegations relating to personal protective equipment procurement irregularities, that he called baseless.

In March this year, Jacobs was transferred from Crime Intelligence to head the police’s Inspectorate, which some police officers aligned to him viewed as a demotion.

Questions remain about what happened, or what will happen, to the evidence Jacobs referred to, allegedly revealing corruption in Crime Intelligence.

Jeremy Vearey, one of Jacobs’s allies who headed detectives in the Western Cape, the province in which Jacobs was previously stationed, was fired at the end of May this year over a series of Facebook posts.

Vearey has challenged this decision and should know by the middle of November 2021 whether his dismissal may be overturned.

Vuma is also accused in the grabber saga with Sitole.

She also made a statement that cropped up in Vearey’s disciplinary action.

It said she had received threatening messages from various people, and she realised they were “serious about attacking her and [Sitole]”.

This week in the meeting of the Portfolio Committee on Police, chairperson Tina Joemat-Pettersson was full of praise, congratulating Vuma and Riet in relation to the unqualified audit.

She acknowledged they were often, instead, grilled in meetings.