WAKE UP AND SMELL LIFE 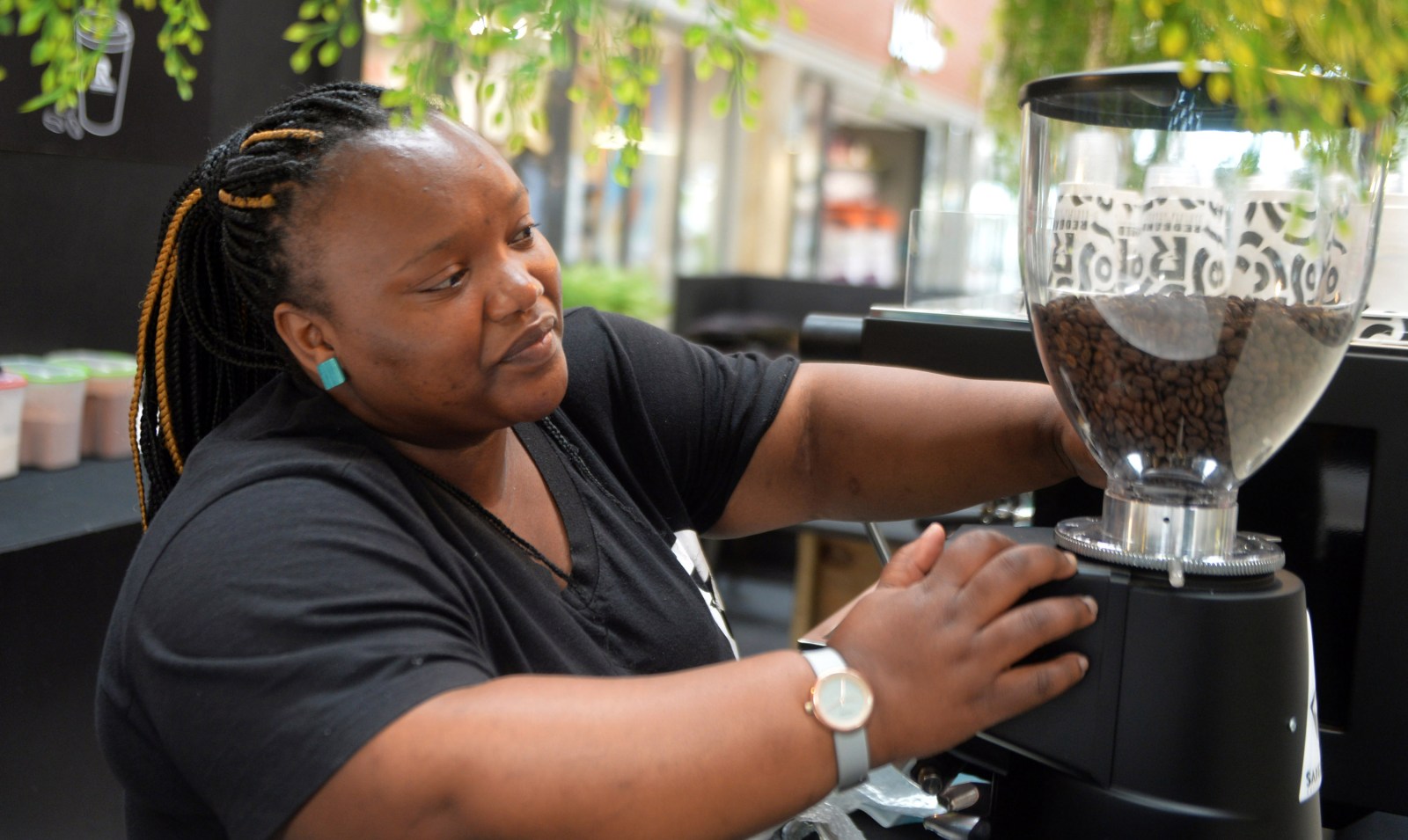 Babsie Mtya opened her own coffee shop in Kenako Mall, Zwide after graduating as a barista from the Red Band Barista Academy. (Picture: Deon Ferreira)

Barista Babsie Mtya went from being an unemployed graduate to owning her own coffee shop, fulfilling a dream and putting a kick in Gqeberha’s coffee scene.

Two weeks ago, 35-year-old Babsie Mtya finally realised her dream to take coffee to Nelson Mandela Bay’s townships when she opened her tiny coffee shop in the Kenako Mall in Zwide.

Running on caffeine and offering a heady mix of friendship, energy, matchmaking and peacekeeping – along with her favourite dirty chai cappuccinos – the new dynamo of Gqeberha’s coffee scene has even bigger plans for the future.

In 2018, Mtya joined the Red Band Barista Academy, which was set up to address unemployment among young people by training them to become baristas. Since then she has not given anybody a reason to overlook her.

“I wanted them to remember Babsie,” she explains.

Mtya, who has a diploma in public relations, managed to secure a few internships. But in 2018, like thousands of young people in the Eastern Cape, where youth unemployment is sky high, she found herself with nothing to do.

She laughs and says her gap year after matric became six years. She never wanted to find herself with nothing to do.

“I like to challenge myself – and let’s be honest, I also wanted to know how they make those hearts in the cappuccino,” she laughs.

The Red Band Barista Academy was launched in Gqeberha in 2014 when 50 new baristas were trained. In 2018, the programme expanded to George and Uganda.

In that year the academy also launched its enterprise development programme to equip baristas to become business owners.

The following year, new academies were opened in Durban, the KwaZulu-Natal Midlands and George, and the year after that, the first Cape Town academy was opened.

The academy now has seven coffee bars in Gqeberha and three in the Western Cape, George and Cape Town.

After graduating in 2018, Mtya worked at a few Red Band coffee bars.

“Training was hard but I am not someone who starts something and doesn’t finish it. We laughed a lot, even if it was difficult.”

She recalls how the baristas are first taught to work with milk by using dishwashing liquid. “We all know Sunlight. We can work with Sunlight. But then they give you milk and that is a whole other story. But now I know how to do it. I wanted to learn to make those hearts – and I did.”

She says that she has never been scared to ask questions. “I would ask and I would also watch how other people do things.”

Mtya explains that she was sponsored to participate in the Work 4 A Living programme. Participation in the programme is required for admission to the Red Band Barista Academy. “They teach a lot about your behaviour at work, how you must conduct yourself, how to budget and excellence in all you do.”

Now Mtya helps to train the students at the Red Band Barista Academy.

“I tell them to be clean first,” she says.

“I say you must wash your clothes and you must clean your machine and you must wipe the counters. If people come here and they see that you are dirty they will think that the coffee shop is dirty as well,” she explains. “Where I come from in Motherwell, we drank Ricoffy first. I never drank Frisco – it wasn’t strong enough. Then I started drinking Jacobs coffee and I thought I had it made. But I didn’t know much about coffee. I thought I knew what good coffee tastes like.

“When I go to a new coffee shop I first ask for an Americano. Sometimes the Americano is really great, but I can hear the barista isn’t doing a good job with the milk. Then I won’t order a cappuccino,” she laughs.

Something draws her attention away from the interview. “You know what? I am going to need a blender to make iced coffee in summer.”

Now her customers get free lessons in the art of coffee making, with their delicious coffees decorated with Mtya’s signature milk hearts.

“I am so proud of what I have achieved. I never thought I would be able to take real coffee to where I grew up.”

Her coffee shop opened two weeks ago and Mtya is already up to date with the gossip in the centre.

“This one [man] I helped because he had a fight with a co-worker.

“I made him a cappuccino with a heart to help him make peace. That one comes here in the morning. Those girls always want cappuccinos,” she says as her customers pass by, getting on with their day. “I tell them they can move on from a cappuccino. There is lots more to discover. I like a dirty chai cappuccino myself,” she says.

She says a group of former trainees from the Red Band Barista Academy still look out for each other and they ensure that everyone gets a job when they need it. “We are [a] family. If one needs a job, we will make sure we find one.”

It has not been an easy year for Mtya as the March 2020 lockdown left many baristas without work. Her mom died and her family moved to East London.

But the year is ending on a high for the bubbly barista. After only two weeks, she greets many people passing by her little shop.

“I am not so good with names but I am very good with faces,” she says.

“When I look at others who are looking for jobs, I tell them it is best to become an all-rounder. Do what you can. Always help. Start at the bottom. Nobody flies from the first day.

Shaun Aupiais, one of Mtya’s trainers at the academy, says she is a shining light in the industry.

“She has so much integrity, phenomenal honesty and morals. She exudes joy and is just such an amazing personality. All that love and joy and passion goes [into] every cup she makes.

“She goes out of her way for every one of her customers. She really is a person who goes above and beyond for every single person.”

He adds that they are particularly proud of her as she was the first person to advance from barista to business owner in their programme.

“We help with finance and to secure the funding. We bought the stand and equipment and we have concluded a rent-to-buy contract with her,” he says.

“We all absolutely love her plan to bring coffee to traditional black areas. We saw this trend in Soweto and Gugulethu, but in Gqeberha this is the first quality coffee shop that I know of.”

Ryan le Roux, the managing director of the academy, says they identify people who progress through the academy as potential business owners.

The academy then creates a mentorship programme for trainees, who are assigned to a senior manager. They then match trainees with a business coach to set up their own business.

Once these programmes are completed they issue the barista with a Red Band franchise licence.

“There is still very big interest in this programme. Students who complete the barista programme get a job very quickly. I constantly get calls from people looking for baristas,” he says. DM168