How real are the benefits of cold water swimming 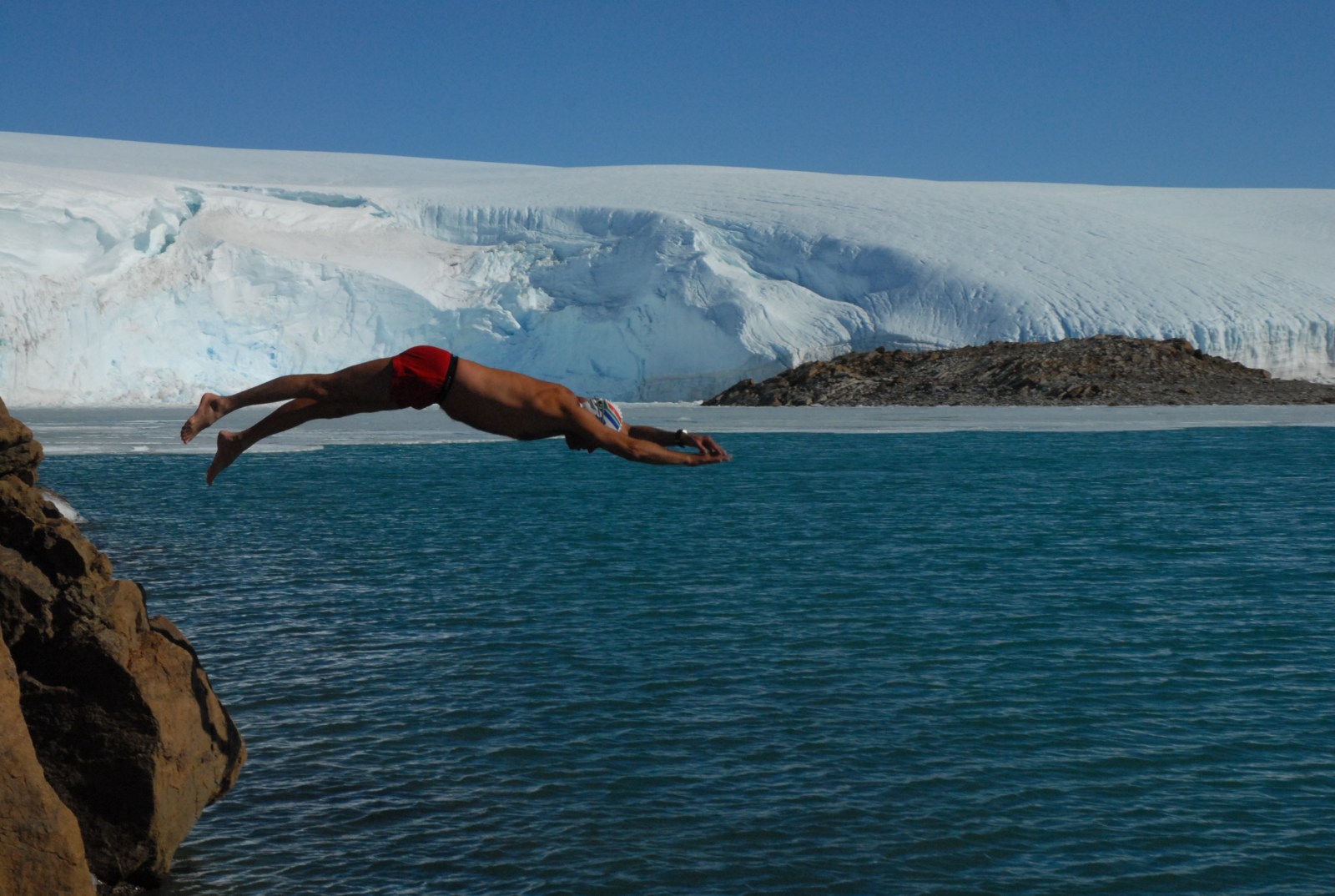 Cold water swimming describes swimming outdoors in cold or icy water and this form of endurance sport is becoming increasingly popular. It can be used as a general umbrella term for swimming in cold to ice-cold water. There is no strict definition of what the temperature should be, but the general consensus is that it be 15 degrees Celsius or less.

Ram Barkai, retired CEO of a financial planning company, is the founder of the International Ice Swimming Association, which he set up back in 2009. Barkai, a celebrated cold water swimmer was determined to establish swimming in icy waters as a recognised sport. Today, its growing membership includes swimmers from 73 countries.

Barkai describes cold water swimming as an extreme sport that takes place in water of 5 C or less. Swimmers only wear a standard costume, goggles and a cap. Yet, Barkai’s approach differs from that of the ice guru Wim Hof, behind the eponymous method. Whereas Hof focuses on cold water immersion, breathing exercises and meditation, Barkai emphasises swimming as a sport.

He has completed 12 ice kilometre swims, 11 ice mile swims and a zero ice mile.  In 2008 he was awarded a Guinness World Record for being the first person to swim in the Antarctic. Barkai has swum in several countries including Scotland, Siberia, and Iceland.

His love for ice swimming started at the age of 40 when he moved to Cape Town. He realised that if he wanted to swim in the Atlantic, he would have to adapt to the cold temperatures. Barkai says once he acclimatised to the cold water, he found it extremely exhilarating: the colder the water the more invigorating. He has inspired many swimmers through his positive approach to life and his ability to challenge norms; he also believes that in cold water swimming, the temperature is no longer a limiting factor. Cold water focuses his mind and forces him to concentrate on the basics such as breathing. He describes himself as an adventure seeker who loves to challenge his limits and explore remote places, explaining that a human’s potential to stretch the boundaries are beyond comprehension. Barkai hopes that ice water swimming will eventually become an Olympic sport.

His advice for beginners is that one should get educated about what one gets oneself into. He says cold water swimming is not only about showing grit. Careful planning and proper training are essential (the website also has some resources and links explaining more about hypothermia and how to prevent it). One needs to know how to navigate monster waves and rip tides. His experience has taught him not to panic because “we don’t die that easily”.

Another enthusiast, is the 53-year-old Ali Mo, a category manager for a short-term insurer. Mo explains that his love of cold water was a lifesaver during the dark days of apartheid; now, his regular swims at Sunrise Beach in Muizenberg gave him some sort of escape and release from the frustrations of those times.

Since then, Mo says “if I don’t get my weekly cold water fix, I have a bad week”. A few years ago he joined a swimming club at Camps Bay. He believes the cold water swimming boosted his immunity, helped him lose 30kg and beat his depression.

“Engaging with the ocean and the sea species around me transfers me into another realm. It is comparable to a spiritual experience. Once I am bobbing behind the breakers I repeat a Dhikr (mantra) which brings me closer to God”, he says.

He swims without a wetsuit, goggles, or a cap and says his friends call him the dolphin whisperer because he attracts dolphins. In addition to all the mental and physical benefits, it has also connected him to a community of like-minded friends. This has given him a new outlook on life. Next year, Mo plans to swim the Bosphorus Cross-Continental Swim race from Europe to Asia.

Yolandah Hall, a 36-year-old PhD student at the University of Cape Town, is also passionate about cold water swimming. Hall took it up while preparing for a triathlon recently. Since joining a swimming club she is hooked. She says although she is not very sporty, she enjoys a new challenge, adding, “The hardest part of cold water swimming is getting into the water. But after six minutes my body adapts”.

Hall recently did the Argus without doing much training. She believes the swimming gave her the necessary stamina and fitness to complete the race comfortably. Cold water swimming makes her feel energised and she no longer suffers from headaches; she also believes the salty water has great healing properties and that the vastness of the ocean reminds her of how vulnerable she is in God’s creation. Next year, she plans to swim the Freedom Day race. It takes place in the channel between Robben Island and Big Bay, where the average water temperature is usually around 13C.

What are the facts?

Dr Sean Gottschalk, a specialist emergency physician who has accompanied ice swimmers to Antarctica, the Himalayas and Mt Everest says swimming is one of the best exercises one can take up because it uses all the major muscle groups; it’s also weight free, almost injury-free and one can practice it well into old age.

The first claims of the benefits — and risks — associated with cold water swimming date back to 450BCE, according to a paper by Tipton, Collier, Massey, Corbett and Harper​​, dubbed ‘Cold water immersion: kill or cure?’. Gottschalk says that once one goes into water of about 13 degrees Celsius or less, many physiological changes happen.

As a beginner, the body goes into alarm mode. An increased adrenalin production causes blood to move away from the peripheral areas such as the skin and towards core organs such as the heart and lungs. The shock causes one to hyperventilate. The process is triggered by the vagus nerve responsible for the functioning of internal organs such as the heart; it activates certain reflex actions to protect them. To bring the hyperventilation under control, it is crucial to put one’s face in the water. This causes a diving reflex (DR) which is found in all mammals. The DR helps the body to save oxygen. It increases blood flow to the vital organs. Getting one’s breathing under control and breathing rhythmically counteracts the shock. Gradually the body starts to adapt and the heart rate and blood pressure lowers.

Experienced cold water swimmers learn how to do this instinctively. The closing down and opening up of blood vessels gives one’s body a good vascular workout.

The endorphins that are triggered when one’s body goes into shock, cause swimmers to experience what is called a “cold water high”. Swimmers say even after their swim they are literally “buzzing”. Swimming in cold water also burns more calories than swimming in warmer water for the same period — warming up and shivering afterwards, burn additional energy and calories.

Cold water swimming is not only for extreme sports athletes. Everyone can do it provided they are reasonably healthy. It is one of the few activities where a higher BMI is an advantage. Thin people feel the cold water more than those that are well covered and are more likely to become hypothermic. Fortunately, this rarely happens and only after more than 20 minutes in very cold water.

Although the optimum dose of cold water necessary to get the maximum benefits, has not been established, Gottschalk says it probably takes about 20 minutes in the water. This will, however, differ from one individual to another. The colder the water the quicker the benefits.

He adds that although cold water swimming is relatively safe, it is vital not to take unnecessary risks; Swimmers need a buddy system to ensure that there is support if things go wrong.

Many swimmers he has come across claim that cold water swimming healed depression, cured chronic muscle pain, eased osteoarthritis, improved their metabolism and reduced inflammation; it allegedly even made serious mental illnesses, such as bipolar disorder, sometimes more manageable. Gottschalk also witnessed how it helped a swimmer overcome addiction. But the research on many of these claims is ongoing and so far not fully scientifically proven. DM/ ML

Iza Trengove produced television current affairs talk shows and lifestyle programmes for SABC and kykNet for 24 years. She writes about health and fitness on her blog Health Noise – real or rumour, where she explores health trends and what is real and what is rumour. She has a Master of Business Leadership from Unisa and a Master’s in Journalism from Wits.