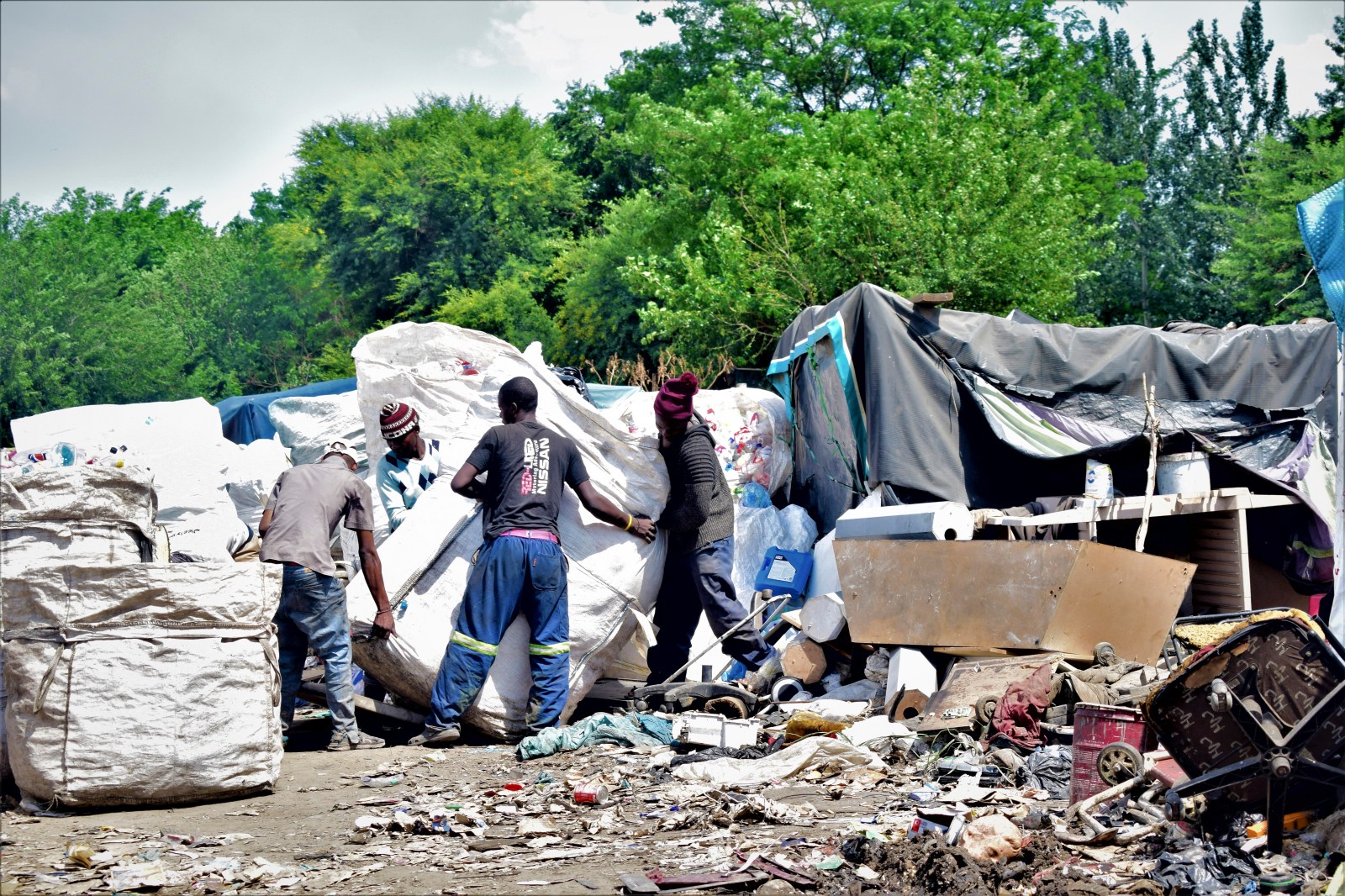 Informal waste reclaimers pick up recyclable waste at their back operations centre and place of stay in Mushroomville, Centurion, Gauteng, on 5 November 2021. (Photo: Michelle Banda)

A community of more than 180 waste pickers in Centurion are facing imminent eviction despite the fact that many have lived in the area for more than 10 years. They fear that not only will they lose their homes, but also lose their livelihoods. They are demanding that if the City of Tshwane does evict them, it provides them with a piece of land in the Centurion area where they can continue their jobs.

Mushroomville is the name given by a community of recyclers to the area they have made their home opposite the Centurion Supersport Cricket Stadium, next to the Hennops River. The name describes how their community mushroomed over time to more than 180 waste pickers who survive by informal waste picking, living in the shabby structures made of their recyclables on-site.

A private property developer wants the land for a hotel and the pending evictions follow a four-year court battle to secure their right to work and live in the area. Their plea for a delay of the eviction to give them a chance to sell all their recyclable material to avoid it being destroyed in the eviction process has been ignored.

The community is to be relocated to a piece of land in Sutherland Ridge for the next six months. They are worried about how they will survive there because it is far from the Centurion business centre where they collect recyclables.

Most of the Mushroomville waste pickers are Lesotho nationals who have come to South Africa to look for work and take care of themselves and their families back at home.

Mapulane Masamane, one of the residents, says: “The eviction will greatly affect our work because where we are being moved to is just for residence and without any means of income, many livelihoods are jeopardised. Many have abandoned crime to do this job but if they are also taking it away from us how does the municipality think we will survive? Not that I am condoning crime but many will be forced into it for survival.”

Lebohang Leroibaki says the recycling business has enabled him to take care of the 11 members of his family including himself. “Without it, we will die of hunger.”

Sipho Msiza, another Mushroomville community leader, says: “On numerous occasions, we have been threatened with evictions but it never went through. But now a court order has been issued stipulating this is private land and the owner wants us out. We are not disputing evictions as long as we are given a space where we can work from around Centurion.”

Stefan van der Westhuizen is Director of RubiconZA, a non-profit organisation that intervenes to protect basic human rights, improve the quality of life and facilitate sustainable opportunities for the marginalised. RubiconZA has proposed the city council and Mushroomville informal waste pickers find a holistic way to make it possible for the “bagerezi” (the colloquial name given to waste pickers) to work and live in a dignified way.

Van der Westhuizen says he has been working closely with the community of Mushroomville for almost six years, to try to assist them in formalising their trade. He says the Mushroomville waste pickers’ plight is about more than just evictions.

“It is a bigger struggle in the City of Tshwane for the formalisation of ‘bagerezi’.”

Van der Westhuizen has sympathy with their plight, recalling how he “witnessed the SAPS and Tshwane Metro Police Department harassing them, kicking over their shelters, burning some of their things and, I’m told, they also confiscated their cash and IDs”.

“When I approached and asked them what they were doing, they said they were on a joint operation and told to clear out the open piece of land which is council land.

“I asked them where these people should move to? Because I understood that the Constitution guaranteed everyone a safe space to sleep and the right to work. They said they could not care where these people were, as long as it was not on that piece of land.

“When they said this, I again asked the officers to point out where these people were supposed to go. One of them pointed to the other side of the Hennops River.

“After that, the workers left the council land and moved to the other side of the river. From 2015 until 2017 nobody came around to bother them. During that time, I started working on a plan to get them to organise into a worker cooperative. I also did research and worked on a proposal that would see a public and private partnership between the city and the workers.

“I gave this proposal to the local DA ward councillor [Gert Visser]. I trusted him to be the representative who facilitates dialogues between the city and the community. He never actioned this. Instead, he was making other plans to get rid of what he called ‘the river people’.

“Sadly, the city is still functioning on the apartheid spatial planning ideology where poor black people must be removed to the fringes of society, far away from the product they have collected,” concludes Van der Westhuizen.

Vanessa Pillay, programme coordinator at Women in Informal Employment: Globalizing and Organizing, has also been helping residents of Mushroomville with getting legal representation by putting them in touch with Lawyers for Human Rights.

Pillay says: “With the help of the human rights lawyers, we tried everything to argue for the workers’ rights to secure housing and the freedom to pursue their livelihoods. We went through several rounds of court proceedings at Pretoria High Court. Eventually, the Constitutional Court dismissed the case without even hearing it. Last year during the lockdown, it all came down to the workers being defeated. Then, an eviction order was granted for 8 November 2021.”

Louise du Plessis, the human rights lawyer who has been representing the Mushroomville community in the court battles, told Maverick Citizen that it’s always been possible to get evictions even in level five of the hard lockdown and the community has had an exceptional circumstance.

“The courts are now granting evictions as if there is no state of disaster. The court order is wrong and the fact that the Constitutional Court doesn’t take the matter is concerning. In a country like ours, to have to go to court to fight for the right of reclaimer workers is pathetic.”

It is not clear whether the relocation site in Sutherland Ridge is ready or not for the Mushroomville community.

According to Du Plessis, they are in talks with the municipality and are going to meet each other on Sunday to make sure the Sutherland Ridge area is ready and there is compliance with the court order.

“On Monday the municipality must help the community move but they are not allowed to take their recyclable materials. Should they resist, a sheriff will be sent. But we are fearing that there is going to be some violence because the waste pickers haven’t had enough time to sell their materials and that means they have lost an income to send home for the festive season,” said Du Plessis.

The City of Tshwane confirmed the eviction. However, Sipho Stuurman, spokesperson in the mayor’s office, said the eviction was now scheduled for 15 November 2021. He said this is because the city is still preparing the temporary accommodation. DM/MC