Rugby, nutrition and sunny skies bridge the gap for a day in Cape Town’s Lavender Hill 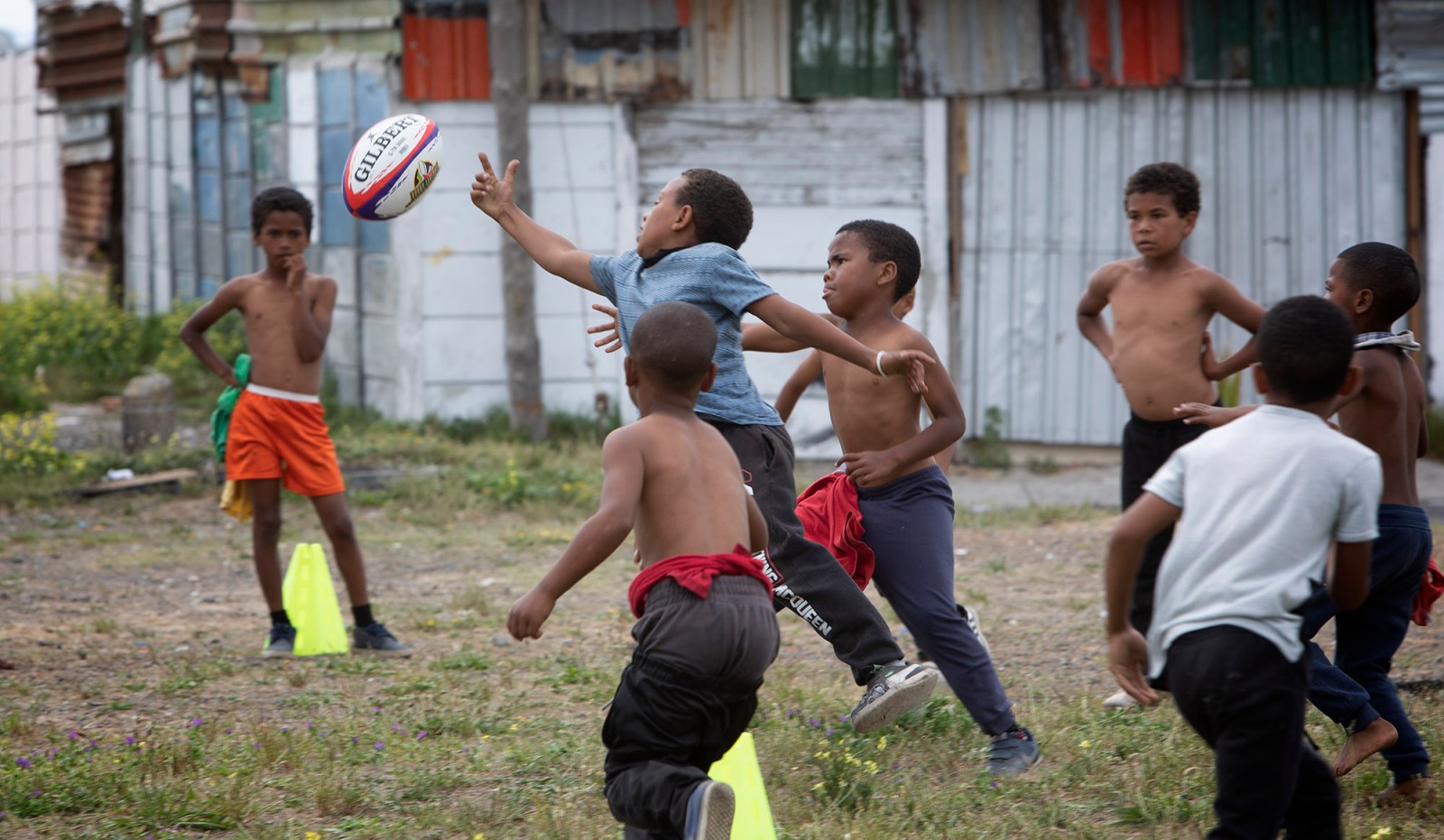 Children in Lavender Hill, Cape Town, on 13 November 2021 are treated to a rugby clinic through the Rugby Legends South Africa development project, Vuka, which focuses on young players in disadvantaged communities who have traditionally been excluded from structured rugby training and grassroots level competition. (Photo: Leila Dougan)

Lavender Hill residents in Cape Town were treated to sports stars, entertainment and a nutritious meal on Saturday, 13 November 2021, celebrated as World Kindness Day internationally. The event was a collaboration between food rescue organisation SA Harvest, Lavender Hill NGO Guardians of the National Treasure and members of the SA Rugby Legends.

From two-storey flats surrounding a large field in Lavender Hill, mothers gaze from doorways and windows while children pass rugby balls and show off handstands and cartwheels. Vibracrete walls are scrawled with gang names and tags but for today the gangsters forgo these few corners, leaving the children to play in peace. In one corner of the field large, pots bubble away, which will later feed the families and children gathered.

Ozzy Nel, Chief Operating Officer of SA Harvest, says food insecurity in areas like Lavender Hill is rife and as a food rescue organisation they close the gap between suppliers with surplus produce and hungry mouths, moving millions of kilograms of nutritious food from farmers, manufacturers and retailers to organisations around the country. The NGO has delivered more than 12 million meals in just over two years, getting food to the most vulnerable.

Food insecurity remains a scourge in lower income communities, with the Integrated Food Security Phase Classification (IPC) analysis report indicating that between January and March 2021, 11.8 million people in South Africa experienced hunger that hit crisis level. The IPC works with UN agencies, government, NGOs and civil society to determine the severity and magnitude of acute and chronic food insecurity internationally. And while people go to bed hungry, as much as 10 million tons of food goes to waste each year, according to the 2017 WWF study, Food Loss and Waste, which paints a grim picture of the amount of nutritious food that ends up in South Africa’s landfills.

According to the report, fruit and vegetables account for 44% of the food waste, “most of it before it reaches the supermarket shelves”. This is what makes the work of SA Harvest essential.

“We rescue stock from farmers and retailers and distribute it to vulnerable communities. We want to make real change. We’re doing a collab with The SA Rugby Legends because we really believe that the more of us who get involved, the more the chances of us addressing hunger and inequalities in these areas,” says Nel.

Former Blitzboks captain Paul Treu, sporting legend Lucas “Kabamba” Floors and former Springbok hooker Dale Santon held a rugby clinic for the Under-15s on the other side of the field. Santon has first-hand knowledge of the daily struggles of children in the area, with food insecurity existing alongside unemployment, high drop-out rates and even higher crime rates.

“I was born in this area. I went to school here. Coming back, it’s always difficult to see how people live. You must remember, for a black or coloured boy living in the 1980s dreaming of becoming a Springbok, you had a better chance of falling pregnant,” Santon says with a chuckle.

“I will always come back. Sports took me out of this situation, and I’m here to give back. We as adults need to put the support pillars there for the children. They’re still young but you can see the excitement and willingness in their eyes,” he says.

Sport has become a way to give back and spot talent early, with the SA Rugby Legends bringing Vuka Rugby to the area, a sustainable rugby programme developed with the South African Rugby Union which started in 2008. Under the programme, schools in Lavender Hill play rugby against each other every Wednesday. “We call it Vuka Wednesdays. We select teams from there. Once a year they play [against] other provinces and from there we select a national team. It’s a path we create for non-traditional rugby schools or public schools,” says Santon.

Chief Executive Officer of local NGO the Guardians of the National Treasure Ralph Bouwers recognises that inequality needs to be addressed holistically, with food organisations partnering with sporting bodies and cultural groups to create meaningful change.

“You can’t just feed the children, you have to see to all aspects of their lives – once you’ve eaten, then what? Let’s do art and culture or sport, let’s do gardening and then you can start actualising. It’s about being inspired to be a rugby player. It’s about bringing hope and not just feeding,” he says.

For Bouwers, the idea is a “complete transformation and upliftment” of the community, trying to keep children off the streets and out of the grip of gangsters, as well as fostering relationships across gang territories.

“On the Cape Flats we have territorial divides. I’m trying to bridge those gaps. The kids throw stones at each other, so we’re trying to build those bridges so that when you’re 18 you played with that person, you were in a team together, so that we get rid of that silo mentality. This is a start. We have to start somewhere,” he says. DM