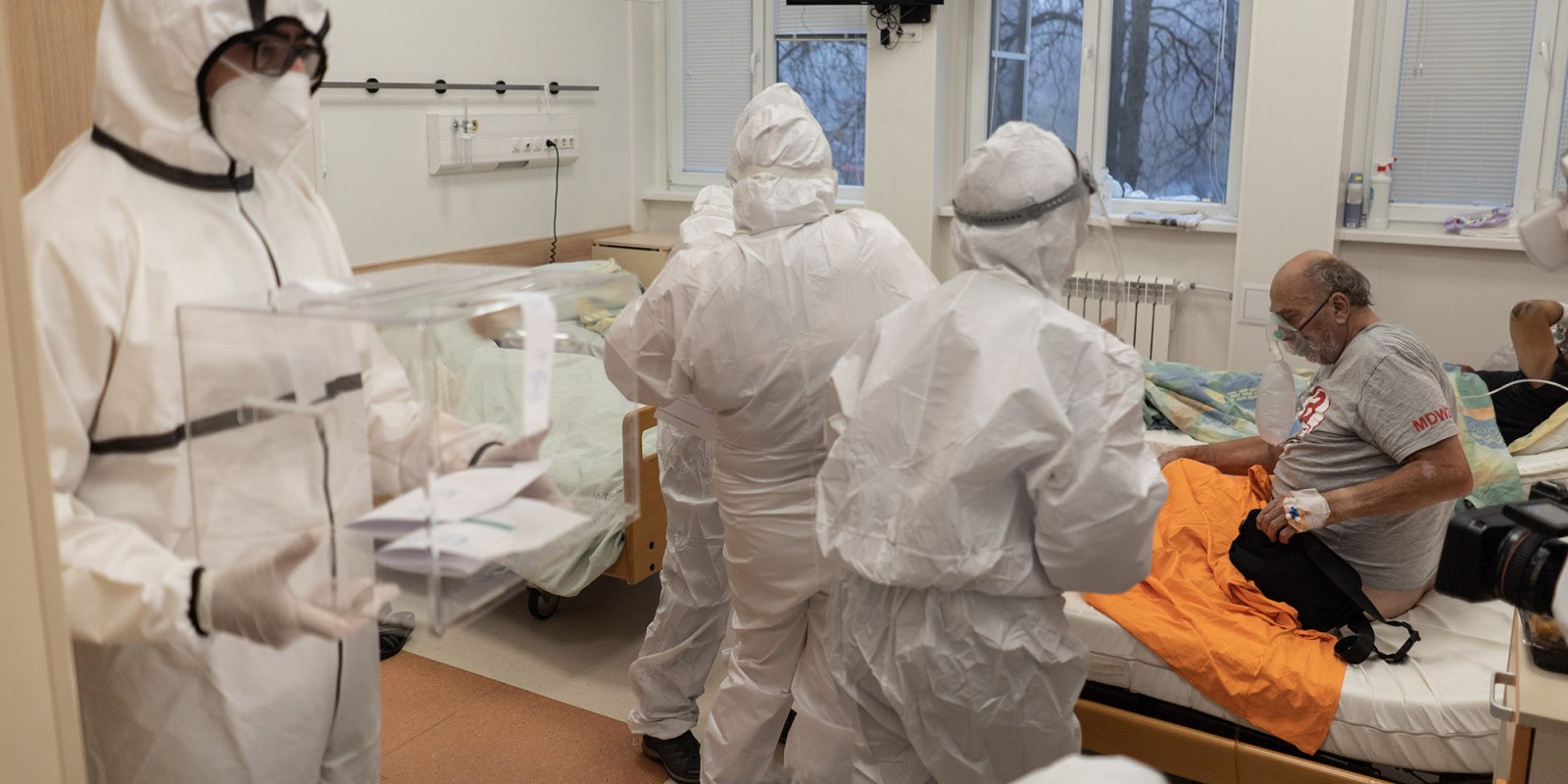 The US economy’s fate remains tied to the pandemic, which is worsening again around the globe. Minneapolis Fed president Neel Kashkari said fear of the virus is deterring people from returning to work, while Treasury Secretary Janet Yellen blamed the pandemic for accelerating inflation.

Austria is putting unvaccinated people under lockdown starting on Monday for at least 10 days in a dramatic move to stem the spread of the virus. New infections spread to almost two million in Europe last week, the most since the pandemic started.

In Germany, leaders plan to require companies to allow employees to work from home when possible and made urgent pleas for wider vaccine uptake. 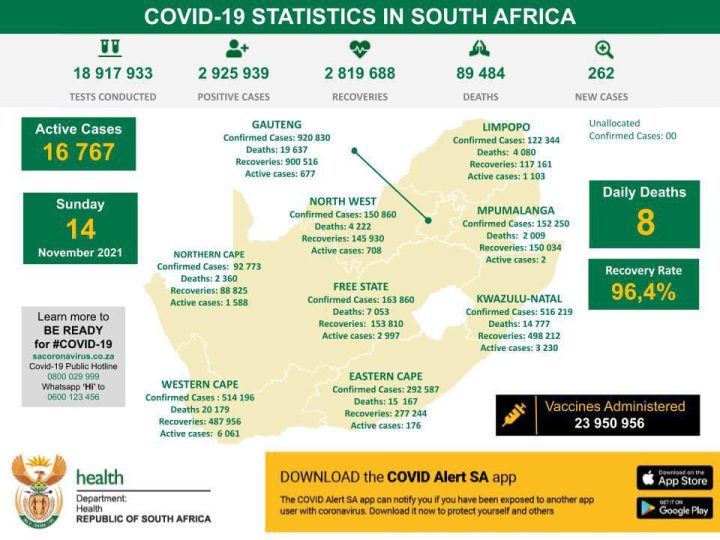 Treasury Secretary Janet Yellen said controlling Covid-19 in the US is the key to easing inflation.

“It’s important to realise that the cause of this inflation is the pandemic,” Yellen said on CBS’s Face the Nation on Sunday.

“If we want to get inflation down, I think continuing to make progress against the pandemic is the most important thing we can do,” she said.

When Donald Trump and Chris Christie were both hospitalised with Covid-19 in late 2020 after spending time together, the former president called the former New Jersey governor with one main concern.

“Are you gonna say you got it from me?” Trump asked him, according to a new book by Christie, which was cited by The New York Times.

Christie also wrote that his priest visited him in the hospital to pray over him. In an CNN interview to be aired on Monday, Christie said he is unsure whether he or Trump will run for presidency again and he doesn’t want to make predictions about 2024.

Virus fear is holding US back, says Neel Kashkari

Getting Americans back to work depends on bringing the Covid-19 pandemic under control, Minneapolis Fed President Neel Kashkari said.

“What’s keeping people on the sidelines – we think it’s fear of the virus, the delta wave and the continued spread,” Kashkari said on CBS’s Face the Nation.

Getting the pandemic “really under control” will give people the confidence to return to work, helping the US economic recovery and bringing down inflation, he said.

Three patients died after a fire broke out in a Covid-19 ward at a hospital in southern Bulgaria, the Associated Press reported. Hospitals are under strain in Bulgaria, where the virus is surging and which has one of the lowest rates of vaccination in Europe.

“Sometimes our decisions do affect other people,” Murthy said on Fox News Sunday. “How fast we drive affects the safety of others.”

“While freedom is absolutely important, we also have a collective responsibility to one another when our decisions do impact the health and well being of others,” he said.

He said vaccination rates rose by an average of 20% in organisations that required shots.

Austria announced a lockdown for unvaccinated people for at least 10 days as coronavirus cases spike to record levels from Monday until at least November 24. Only about 65% of Austrians are fully vaccinated, one of the lowest rates in Western Europe.

Austria’s seven-day average of Covid cases has more than doubled this month to more than 10,000, and its recent rate of infection is among the highest in the world. A record 13,152 cases were reported on Saturday. The seven-day infection rate of 775 new cases per 100,000 people is well above 289 in neighbouring Germany.

The Czech Republic recorded 9,161 new Covid-19 cases in 24 hours through Saturday, up by 3,400 from a week ago, according to the health ministry data. The nation of 10.7 million people reported more than 10,000 daily cases for four consecutive days this week. The outgoing government of Prime Minister Andrej Babis plans to announce new measures to stem the spread on Monday but is seeking agreement on curbs with the future Cabinet led by the Civic Democrats.

Swiss boosters for everyone

A third vaccination will have to be extended to the general population in the near future, Swiss President Guy Parmelin said in an interview with local paper NZZ am Sonntag. Switzerland currently recommends booster shots for people over 65 years old.

Due to a recent surge in Covid cases, the three parties negotiating to form Germany’s next government plan to require companies to allow office workers to work from home where possible, Handelsblatt newspaper reported.

Germany recorded another 33,498 coronavirus infections in the 24 hours through Sunday morning, taking the total since the start of the pandemic above five million, according to data from the RKI public-health institute. The number of deaths rose by 55 to 97,672, while the seven-day incidence rate climbed to 289.

Cathay Pacific Airways said it will move its crew to a different hotel in Frankfurt after a pilot arriving from the German city to Hong Kong tested positive for Covid-19, the South China Morning Post reported. The airline will suspend layovers in the city as soon as possible, according to the report, and compliance checks at overseas stations will also be increased.

China reiterated the need to aggressively quash domestic Covid-19 infections, measures which extended to at least one pet while its owner was away. The dog in Shangrao city in eastern Jiangxi province received “non-hazardous treatment” before its death, according to a government statement.

Bangkok will allow internet cafes and game centres to reopen from November 16 as daily new infections have fallen below 10,000 daily cases since late October, compared with the peak of 20,000 daily cases in August.

Australia could begin its roll-out of Covid-19 vaccines for children aged 5-11 in January, the Sydney Morning Herald reported.

In the clearest signal yet from the government for a start date, Covid-19 Task Force Commander Lieutenant General John Frewen said doses of the Pfizer vaccine had been secured but aren’t yet in the country.

US weekly vaccinations highest since May

The US administered almost 10 million vaccine doses in the last week, the most since late May, the White House said on Saturday. By Wednesday, about 900,000 shots had been given to young children. Booster shots are outpacing first doses by far.

Singapore eases rules on vaccine records for US travellers

Singapore eased its rules for vaccination records for travellers from the US The city-state will now accept a physical vaccination card along with a letter from the provider of the inoculation, the Straits Times reported.

The move came after travellers from the US were served quarantine notices when they arrived in Singapore because their vaccination records weren’t recognised. DM